We conducted a retrospective review of the medical records at our hospital between April 2006 and December 2011 and identified 16 consecutive patients with pulmonary nocardiosis. We analyzed the clinical and radiological findings of these patients. The inclusion criteria were the presence of Nocardia spp. in sputum or bronchoscopic samples from the respiratory tract. Nine of the 16 patients were excluded from this study because CT images were missing, leaving a total of 7 patients (male:female, 3:4; average (mean ± S.D) age at the diagnosis, 67.6±15.2 years). The species of four Nocardia strains isolated from the seven patients were determined by 16S ribosomal DNA sequencing (11). We also searched the medical literature to find reports of pulmonary nocardiosis in Japan between 2002 and 2011 to compare our findings. We identified 33 patients (average (mean ± S.D). age at diagnosis, 59.2±15.2 y; male:female, 2:1) who were evaluated by HRCT. Pulmonary radiologists with >15 years of experience who were blinded to the clinical findings of the patients independently reviewed the images, and decisions images were interpreted by consensus. The definition of the interpretations followed the Glossary of Terms for Thoracic Imaging proposed by the Fleischner Society (11). We then evaluated correlations between radiological and clinical findings in our patients, and compared the radiological findings with those of published reports. This retrospective study was approved by the Ethical Board of Kyorin University (Mitaka, Tokyo, Japan).

Data were statistically analyzed using Pearson’s chi-square test or the Mann-Whitney test and SPSS version 19. A P value of <0.05 in paired two-sided tests was judged to represent statistical significance.

Clinical features of our and reported patients 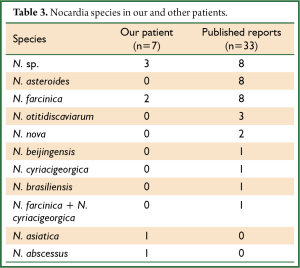 Table 3 Nocardia species in our and other patients.
Full table

Thoracic HRCT showed no zonal predominance in our case series, but predominant distribution from the middle to the peripheral area (Table 4). Figure 1 shows the major representative HRCT findings in our patients (Figure 1). Although various radiological findings such as cavitations, masses, consolidations, bronchial wall and septal line thickening, as well as ground glass opacity, were evident in the present and previous patients (1-5) , the main findings in the present study comprised nodules (n=5, 71.4%). Four patients had multiple nodules. We could not obtain detailed HRCT findings with respect to the size and distribution from the reported cases (Table 5), but cavitations were the most prevalent (33.3%), followed by nodules (24.2%). Seven among the 33 reported patients had multiple nodules and one had a solitary nodule, which was a similar trend as the present study. Of note, crazy paving appearance on HRCT were commonly observed in our five cases (71.4%), but statistical significance between the groups with or without CPA was not detected regarding with their clinical findings such as the severity of fever and serum inflammatory markers. 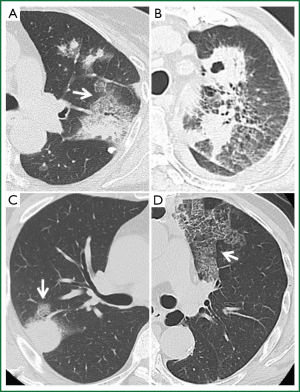 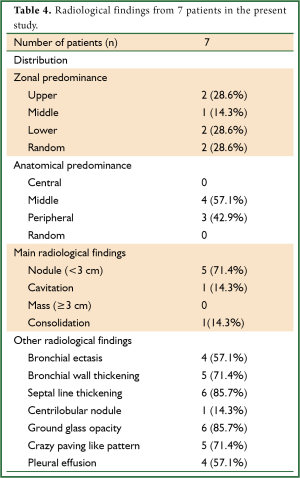 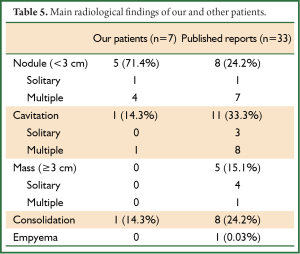 Table 5 Main radiological findings of our and other patients.
Full table

Various HRCT findings of pulmonary nocardiosis have been reported such as nodules/masses, consolidation/infiltrates, pleural thickening, and cavities (2-4,44). Furthermore, ground glass opacity with superimposed septal thickening and intralobular reticulation was found (45,46), which initially thought to be specific alveolar proteinosis. The total area of lung inflammation on HRCT images and/or the elevation of serum inflammatory markers in the present study seemed irrelevant to the presence of CPA. To the best of our knowledge, HRCT findings of CPA have not been described, which might have been underestimated in pulmonary nocardiosis. Blackmon et al. (4) reported that 57% cases revealed discrete nodules with a tendency for multiple in number, which were also predominant findings in previous reports and in our case series. Oszoyoglu et al. (3) also reported that the most commonly described findings were nodules and cavities. The main HRCT findings in the present study were lung nodules, which tended to be multiple without a zonal preponderance, but were predominantly distributed in the middle to the peripheral area.

The HRCT findings of pulmonary nocardiosis were diverse and multiple nodules found from the middle to the peripheral area were diagnostic clues. Crazy paving appearance might be a noticeable HRCT findings previously have not been described. Greater understanding and recognition of these findings might result in more rapid and appropriate diagnoses of affected patients.