Lung cancer is the leading cause of cancer death globally (1). Non-small cell lung cancer (NSCLC), which in earlier stages is treatable by surgical resection. To date, anatomic TNM stage is considered pivotal in the prognosis of NSCLC (2) and is the most important therapeutic determinant, according to National Comprehensive Cancer Network (NCCN) guidelines (v6.2015). The presence or absence of nodal metastases is critical in deciding whether chemotherapy and radiation should be administered in conjunction with surgical resection.

Chest computed tomography (CT) and positron emission tomography (PET)/CT scans are useful for preoperative TNM staging (3,4). Invasive methods, such as fine-needle aspiration (FNA) with ultrasound (US) guidance (endobronchial or esophageal endoscopic routes) or mediastinoscopy, may also be utilized to improve the accuracy of preoperative nodal staging (5). However, the added cost of invasive procedures is not warranted if surgery is supported by chest CT or PET/CT findings alone (6). At our institution, complete resection of tumors and enlarged lymph nodes relies entirely on noninvasive clinical staging (as above) if feasible.

Given this approach, there is the distinct possibility that preoperative clinical staging and postoperative pathologic staging may conflict, once surgical specimens are thoroughly examined. Consequently, our aim was to identify clinical and pathologic characteristics that may influence nodal upstaging of this sort, comparing circumstances in which tumors were eventually upstaged to pathologic N1 (pN1) or N2 (pN2) with unchanged same-stage counterparts scenarios.

Between January, 2011 and December, 2014, 634 patients at Seoul St. Mary’s Hospital in Korea were diagnosed with NSCLC and underwent surgical resection. Of this population, 140 patients were staged as pN1 or pN2. After excluding 37 patients who received neoadjuvant chemotherapy prior to surgery, 103 patient charts were reviewed retrospectively. In instances of postoperative nodal upstaging patients were assigned to group A, whereas patients whose pre- and postoperative nodal staging remained unchanged were assigned to group B. Clinical characteristics of the two groups and respective pathologic features were compared. The TNM classification system of the American Joint Committee on Cancer was applied for staging purposes. All clinical specimens were examined by certified pathologists, and their observations were duly recorded. This study was approved by the Institutional Review Board of Seoul St. Mary’s Hospital at the Catholic University of Korea.

Preoperative clinical staging was achieved by contrast-enhanced chest CT scan and F-18-fluorodeoxyglucose (FDG)-PET/CT scan. Malignancy was signaled by a short-axis nodal diameter >10 mm on CT scan and by nodal uptake of FDG beyond surrounding mediastinal structures, unless benign nodal calcifications were noted or nodes on unenhanced CT images were highly attenuated, with distinct margins (4). Surgery was elected if complete resection was feasible, despite questionable nodal status on chest CT and PET/CT scans; and systemic lymph node dissection was routinely performed to accurately stage patients postoperatively. More than three stations of mediastinal nodes were dissected, including paratracheal and subcarinal nodes on the right and para-aortic, subaortic, and subcarinal nodes on the left.

Clinicopathological characteristics of group A (upstaged) and group B (unchanged) were compared. Student’s t-test or Wilcoxon rank-sum test was used to assess continuous variables, and χ2 or Fisher’s exact test was applied for categorical variables. Multivariate logistic regression was performed to analyze factors that impacted postoperative nodal upstaging. Statistical significance was set at P<0.05.

Clinical characteristics of the two groups were similar (Table 1). However, mean age in group A was comparatively lower (61.6 vs. 68.4 years; P<0.001); there were more women in group A by comparison (47.5% vs. 15.9%; P=0.001); and average patient smoking history in group A (vs. group B) was shorter (12.2 vs. 28.8 pack years; P<0.001). Tumor distribution (lobe involved) did not differ by group, and peripherally located tumors predominated in both groups. Extent of resection (generally standard) was similar for both groups (P=0.0180). In two instances, patients of group B underwent limited resections (one wedge resection and one segmentectomy) due to poor pulmonary function, but full systemic lymph node dissection was done in each case. Average counts of lymph nodes dissected in groups A and B were comparable (16.6±7.8 vs. 19.4±10.5; P=0.115). Video-assisted thoracoscopic surgery (VATS) was often performed, although significantly more so in group A (P=0.006) given the high number of patients with cN0 or cN1 staging. Mean maximum standardized uptake value (SUVmax) of PET/CT scans was higher in group B subjects (7.3±3.6 vs. 10.4±4.3; P=0.001). 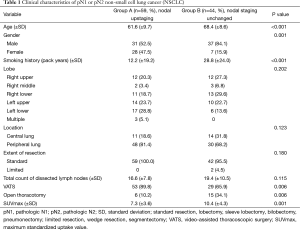 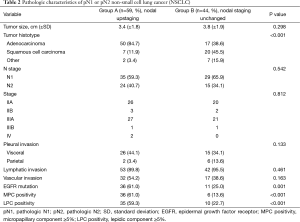 In addition to the clear predilection for adenocarcinoma in group A (vs. group B), some factors were distinctly associated with adenocarcinoma, as opposed to other types of NSCLC, particularly younger age, female gender, shorter smoking history, lower SUVmax, and positivity of biomarkers (EGFR, MPC, and LPC) (1). The 67 patients diagnosed with adenocarcinoma were then compared by group (Table 3), showing that age, SUVmax, EGFR mutation, and LPC positivity did not differ between groups. However, patients in group A (vs. group B) with adenocarcinoma were significantly more often female (56.0% vs. 23.5%; P=0.026), with shorter smoking history (8.3±14.3 vs. 21.7±21.7 pack years; P=0.027) and greater likelihood of MPC positivity (72% vs. 35.3%; P=0.008).

NSCLC accounts for most lung cancers and is treatable surgically in early stages. As the most important determinant of treatment and prognosis, accurate TNM staging is essential before and after surgery. However, preoperative clinical staging of nodes by imaging and postoperative pathologic staging of nodal dissections are bound to differ in some instances. One particular source citing carcinoembryonic antigen (CEA), SUVmax, and tumor size as factors predictive of pathologic upstaging (7) is supported by other studies that confirm the predictive values of CEA and SUVmax in nodal upstaging (3,8). Herein, we have addressed the nature and character of tumors that typically produce occult lymph node metastases, comparing tumors that were upstaged with same-stage tumors, unchanged in status postoperatively.

At many institutions, surgeries are performed without benefit of invasive lymph node evaluations if chest CT and PET/CT scans offer satisfactory assessments (3,6,8). This is done because systemic lymph node dissection is often appropriate for either N1 or N2 nodal staging (as stipulated by NCCN guidelines) but is not indicated for N3 disease. Especially at N1 stage or in single-station N2 staging, surgical resection may improve patient prognosis (6,9). Our institution favors this strategy, encouraging surgery as primary treatment in patients with N1 or resectable single-station N2 staging by chest CT and PET/CT scans. Although patients of group A were upstaged postoperatively from cN0 or cN1 to pN1 or pN2, others clinically staged as N1 or N2 in group B who remained unchanged conceivably may have had more advanced or aggressive disease, presenting as single station or non-bulky lymph node metastasis on imaging studies. Still, the two patient groups did not differ significantly in terms of final pathologic staging, so between-group comparisons seem reasonable.

Invasive adenocarcinomas are inherently heterogeneous, displaying a mixture of histologic elements. The primary growth patterns (acinar, papillary, micropapillary, solid, and lepidic) may serve as subtypes through semi-quantitation (5% thresholds) (10). Various studies have indicated that subtyping generally reflects the prognosis of adenocarcinoma (11-15). However there are cases in which characteristics of tumor change depending on whether a small amount of histologic pattern is included or not in the tumor. MPC and LPC are commonly identified in many studies delineating the relationship between tumor histology and patient prognosis (16-22). Because our analysis was confined to pN1 or pN2 staging after radical surgery and the number of patients was limited, the value of classifying adenocarcinomas by subtype was questionable. Instead, the impact of MPC and LPC positivity was assessed.

A number of studies have linked a poorer prognosis with MPC positivity (16,20,21). In one investigation, small amounts of MPC in tumors were associated with tumor recurrence, and the recurrence rate was comparatively higher after limited resection of MPC-positive tumors (23). This implies that MPC may have a singularly profound tumor effect, regardless of other components. In addition, there are studies attributing augmented tumor invasiveness and lymph node metastasis to MPC elevations (16,22,24). Accordingly, the thrust of this study (i.e., MPC positivity promotes occult lymph node metastasis) is similar. Given that MPC-dependent nodal metastasis escapes ready detection by chest CT and PET/CT scans, confirming or excluding MPC positivity at the time of intraoperative frozen section seems imperative. Unfortunately, this objective is limited by current methods and applicable requirements (25). If MPC positivity must be await postoperative confirmation, further surgery may be needed to ensure proper treatment, namely completion lobectomy and systemic lymph node dissection.

This study has several acknowledged limitations, the most obvious being its retrospective design, the single-institution accrual of data, and the relatively small number of patients recruited over a period of just 4 years. However, the efforts made were consistent, involving similar preoperative evaluation and treatment plans and reproducible surgical techniques. Still, our preoperative nodal staging was subject to inaccuracy due to a lack of invasive procedures, which were prohibitive in this context. Clinical staging of nodes was thus limited to available imaging methods. Further verification of outcomes are warranted here, using combined invasive and imaging assessments.

In conclusion, a significant relationship between MPC positivity and occult lymph node metastasis was demonstrated in patients with NSCLC at pN1 or pN2 stage. If MPC positivity is confirmed postoperatively in such patients, completion lobectomy and systemic lymph node dissection are appropriate and may necessitate further surgery.

The manuscript has been edited by native English-speaking experts at BioMed Proofreading, LLC.