Some types of cancer occur in certain regions and tend to spread to predilection organs or locations. Lung cancer occurs predominantly in the upper lobes and the prevalence of lung cancer is increasing (1). A recent finding demonstrated that the majority of invasive lung adenocarcinomas occur and are recurrent in the upper lobes (2). Lung cancer with lung to lung metastasis is frequently encountered in daily practice and owing to the availability of computed tomography (CT) scan it can be readily detected. Due to systemic spreading to the lungs through the bloodstream, the distribution can be similar to pulmonary metastases from other non-lung cancer malignancies. That is to say, on CT scans, lung to lung metastases by lung cancer will be most commonly seen in the outer third of the lungs, especially the subpleural regions of the lower lobes (3-5). However, in a study by Onuigbo WI, one lung cancer patient had contralateral lung metastases confined to the upper lobe after necropsy (6).

In East Asia, there are several unique characteristics of lung cancer (7), including the predominance of adenocarcinoma over other cell types, as well as a large proportion of never smokers and female patients. Moreover, the incidences of activating mutations of oncogenic drivers in Western and Asian populations are different, especially the epidermal growth factor receptor (EGFR) and KRAS mutations (8-10).

Although important advances have been made in our understanding of the molecular mechanisms underlying lung cancer, few recent studies have investigated the patterns and mechanisms of contralateral lung metastasis in lung adenocarcinoma.

The main objective of this study was to investigate the association among the distribution of contralateral lung metastases versus primary lung tumor, the clinical characteristics of affected patients, and EGFR mutation status.

This retrospective study included patients with lung adenocarcinoma who were diagnosed between January 2012 and December 2013 at Taichung Veterans General Hospital (TCVGH), Taiwan. To be eligible for the study, patients were required to have treatment-naïve and pathologically confirmed stage IV lung adenocarcinoma with contralateral lung metastases according to the 7th edition of the American Joint Committee for Cancer (AJCC) staging system (11) and available tumor specimens for EGFR mutation genetic analysis. Patients were excluded if they had lung cancer with histology other than adenocarcinoma, including those with carcinoma not otherwise specified (NOS), synchronous multiple primary lung cancers [according to Martini and Melamed’s criteria (12)], or other active malignancy. Chest CT studies, including the liver and adrenal glands, were reviewed by two chest physicians. Lung cancer histology was classified according to the World Health Organization criteria (13). Demographic characteristics and clinical data, including age, gender, tumor stage, primary tumor location, performance status, smoking status, and EGFR mutation status were collected for analysis. A never smoker was defined as someone who had never smoked or smoked less than 100 cigarettes in his or her lifetime. This study was approved by the Institutional Review Board (IRB) of TCVGH, Taiwan. Written informed consent for genetic testing and clinical data records were obtained from all patients.

EGFR mutations were tested by matrix-assisted laser desorption ionization-time of flight mass spectrometry (MALDI-TOF MS), as described in our previous report (14). All tests were performed at the ISO15189-certified TR6 Pharmacogenomics Lab (PGL), as part of the National Research Program for Biopharmaceuticals (NRPB), in the National Center of Excellence for Clinical Trial and Research of NTUH. 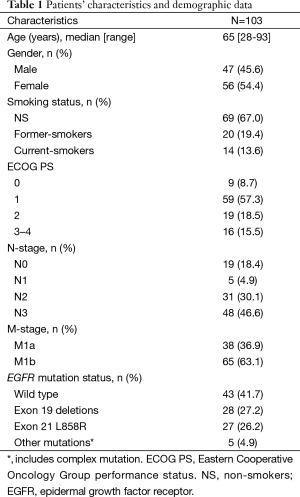 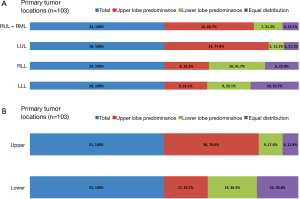 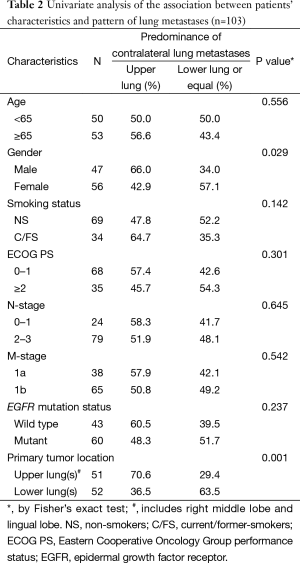 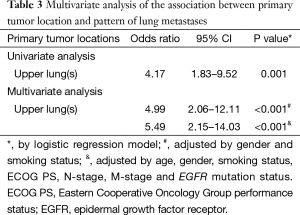 Lung metastasis is a multistage process in which the lung cancer tumor progresses and spreads to distant organs, most commonly through the systemic veins and pulmonary arteries. Lung adenocarcinomas typically metastasize to a range of organs, including brain, bone, lung, liver, and adrenal gland (15,17). Moreover, lung adenocarcinoma metastasis in these various sites frequently occur concomitantly (18). The phenomenon is consistent with our findings which showed multiple metastases in patients with contralateral lung metastases. A number of general mechanisms of dissemination enable lung cancer tumor cells to leave the primary tumor and reach distal organs, and one such mechanism might be influenced in part by circulation patterns. However, in addition to the influence of hematogenous dynamics, the lung cancer cells preferentially metastasize to specific organs, which suggests the existence of specific molecular interactions that favor the retention of tumor cells in these organs. Lung capillaries are lined with endothelial cells that are surrounded by a basement membrane and adjacent alveolar cells. The basement membrane is an obstacle that circulating tumor cells can bypass only by expressing specific mediators of transendothelial migration (19,20).

Stephen Paget’s seed and soil hypothesis and the following phenomenon suggested that the location of metastases was not random, and indicated that “fertile soil”, “inflammatory oncotaxis”, and microvascular injury are the keys for circulating metastatic cells to allow colony establishment (21,22). However, why is the upper lobe predominance contralateral lung metastases in upper lobe lung cancer? The majority of invasive lung adenocarcinomas occur and are recurrent in the upper lobes even in never-smokers (2). The relatively poor perfusion of the upper lung regions results in slower lymphatic drainage along the peribronchial system. Gurney et al. postulated that this process might result in higher particle concentrations, subsequently predisposing those regions to lung disease (23). Alternatively, physiologic variables such as differences in perfusion could lead to a variation in immune surveillance, angiogenesis, or other mechanisms that affect early tumor development and invasion (2). Inhaled air pollutants such as particulate matter measuring 2.5 to 0.5 micrometers in size (PM2.5 or PM0.5) can damage pulmonary epithelial cells and vascular endothelial cells (24-26). Particulate matter can induce marked increases in vascular permeability via ROS-mediated calcium leakage, via activated TRPM2, and via ZO-1 degradation by activated calpain (26). In humans, damage to alveolar epithelial cells, macrophages, vascular endothelial cells, and the blood-gas barrier by nanomaterials was observed using electron microscopy and energy dispersive X-ray analysis (27). Particulate matter and nanomaterials can induce pulmonary inflammation, and the expression of adhesion molecules by vascular endothelial cells could be differentially affected by regions within the body. These adhesion molecules include intercellular adhesion molecule-1 (ICAM-1), vascular adhesion molecule-1 (VCAM-1), and P or E-selectin (28-32). Previous evidence indicated that the upper lobes of the lungs of smokers contain higher extracellular concentrations of ferritin-bound iron and decreased concentrations of transferring (29). Age-long inhaled particles, chemicals, or/and other injuries may trigger differentially and accumulated responses between the upper lobes and lower lobes and cause damage-induced microvascular leakage, inflammation and adhesion molecules (P- or E-seletin, ICAM, VCAM), which may provide the niche, inflammatory oncotaxis, and promote the recruitment of circulating tumor cells to the lung (33-37).

Our study had several limitations. The predilection for the upper lung regions may not be limited to lung adenocarcinomas, as other invasive histology subtypes of lung cancer may also exhibit this phenomenon. Larger sample sizes are needed for further analysis of the distribution of contralateral lung metastases. EGFR mutation and smoking status were not associated with the distribution of contralateral lung metastasis. This finding requires further study.

Our findings indicate that upper lobe lung adenocarcinoma was significantly associated with contralateral upper lung predominance metastases. Further research is needed to gain a better understanding of the underlying mechanisms.

We would like to thank the Comprehensive Cancer Center of Taichung Veterans General Hospital for its assistance with the collection and management of the data.