Brachiocephalic veins (BCVs) and the superior vena cava (SVC) are critical areas vulnerable to tumours arising from the anterior mediastinal compartment, such as thymomas, thymic carcinoma, thyroid neoplasm, and germ cell tumours, as well as right-sided pulmonary neoplasms. The type of resection and reconstruction of BCVs or the SVC depends on the extent of vessel defect: partial resection and direct repair (with or without a patch) or complete resection and prosthetic replacement (1). Prosthetic graft interposition in patients undergoing SVC resection due to extensive infiltration can be safely performed; moreover, it can ensure sufficient tumour-free resection margins and adequate blood flow (2).

However, resection and reconstruction of the SVC is still considered surgically challenging and is rarely performed, which is why no standard technique has yet been implemented (3). Moreover, prognosis depends on which surgical strategy or technique is employed, on which replacement material is chosen, and on the number of complications encountered, such as graft occlusion and/or infection.

All patients undergoing surgery were prospectively registered in the database at ASAN Medical Center, which records baseline patient characteristics, results of the preoperative evaluation, detailed information on surgery, perioperative treatment, and follow-up status. This registry was screened to identify patients who underwent prosthetic reconstruction of the BCVs or the SVC combined with resection of malignant tumours between November 1998 and February 2012. All patients who had undergone partial resection with or without patch angioplasty were excluded from this study. A total of 16 patients were enrolled in this study. The following data were collected to identify the correlation between graft patency: graft material, diameter, the presence of an external ring, proximal anastomosis site, distal anastomosis site, and anticoagulation therapy.

Median sternotomy was the most common approach to anterior mediastinal tumours. Concomitant pulmonary resections included lobectomy in one patient and wedge resection in nine patients. One patient with lung adenocarcinoma in the right upper lobe underwent lobectomy through a right posterolateral thoracotomy, followed by SVC resection and reconstruction through a median sternotomy.

For cavo-caval anastomosis (SVC interposition), the extrapericardial portion of the SVC was prepared and the intrapericardial SVC portion was exposed. When infiltration involved one or both BCVs, the prosthesis was placed between the BCV and the SVC (BCV-SVC, with cross clamping) or between the BCV and the RAA (BCV-RAA, without SVC cross clamping). Cardiopulmonary bypass was not performed on any patients.

The diameter of the grafts ranged from 8 to 20 mm. The median diameter of the right BCV or the SVC grafts was 14 mm (range, 10–18 mm) and that of the left BCV grafts was 10 mm (range, 8–20 mm). All patients received intravenous heparin sodium (50–100 U/Kg) 5–10 min before vascular occlusion. After intraoperative heparinization, the partial thromboplastin time (PTT) was allowed to normalise without pharmacologic reversal. Thirteen patients were discharged with warfarin therapy, and most patients received anticoagulation therapy for a minimum of 6 months. Patients were selectively transitioned to an antiplatelet agent or warfarin at the surgeon’s discretion.

Kaplan-Meier curves were used to delineate graft patency, and log-rank tests were used to compare the between-group differences in the rates. For univariable analyses, the Cox-proportional hazards model was used to determine the risk factors of graft occlusion. All statistical analyses were performed using IBM SPSS 18.0 (New York, NY, USA) and a P value <0.05 was considered statistically significant.

Baseline characteristics of patients and grafts 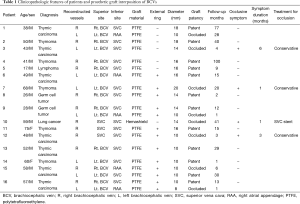 Out of a total of 20 grafts in 16 patients, eight grafts in eight patients were occluded. The median duration to graft occlusion was 5 months (range, 1–41 months). Among the eight patients with graft occlusion, four patients experienced occlusive symptoms such as headache, facial swelling, and upper extremity edema. For three out of four patients with occlusive symptoms, these symptoms improved over a period of 1, 3, and 6 months following treatment using diuretics and low molecular weight heparin (Figure 2). One patient who received SVC graft interposition using a Hemashield graft had severe symptoms due to extraluminal compression from a recurring mediastinal lymph node originating from lung cancer; therefore, he received SVC stent insertion. After the insertion, his symptoms improved immediately.

Figure 2 Representative computed tomographic images with contrast enhancement in a patient suffering from acute occlusive symptoms for 6 months due to graft occlusion, which occurred 4 months after initial surgery. (A) The image shows an occlusion of the left BCV graft and swelling of the anterior chest wall at the time of symptoms; (B) an image obtained 6 months later, showing newly developed collateral vessels and a mild improvement in the swelling of the chest wall, but also showing a large amount of right pleural effusion still remaining; (C) an image obtained 12 months later, showing more collateral vessels and a definite improvement in chest wall swelling.

SVC reconstruction is not considered to be a contraindication for the resection of a bronchopulmonary or mediastinal neoplasm in an otherwise potentially curable patient (4,5). Appropriate indications and surgical techniques for graft interposition of the SVC or the BCVs are documented to have clear benefits in a select group of patients. Complete prosthetic replacement has not been shown to increase overall postoperative morbidity in patients undergoing SVC resection and it can be performed when other reconstruction techniques preclude sufficient tumour-free resection margins or compromise adequate blood flow (2,5).

Ringed polytetrafluoroethylene (PTFE) grafts have been used for the reconstruction of mediastinal veins with considerable success (6). Various strategies for graft interposition of BCVs or the SVC have been previously investigated (2,4,6-9); however, an optimal strategy remains unclear because the procedure is uncommon, and data regarding long-term graft patency are limited. Thus, this study focused on the correlation between long-term patency and surgical strategies and techniques of each graft rather than on the oncologic survival outcomes of the patients.

Eight (50%) out of 16 patients in this study experienced graft occlusion. The incidence was relatively high compared to previous studies, which report an overall thrombosis rate of PTFE reconstruction of the SVC between 14–24% within 3 to 5 years (3,10). A possible explanation for these results may be that the SVC reconstructions in our study were performed by different cardiac surgeons who used different graft interposition techniques based on their individual preferences. Going forward, it may be necessary to establish an standardized optimal policy for SVC reconstruction performed by one experienced surgeon only, in order to ensure hospital-wide quality control.

In this study, four out of eight patients (50%) who experienced graft occlusion presented clinical symptoms. All symptomatic patients had undergone unilateral graft interposition. Based on these findings, we speculate that unilateral graft interposition should be avoided to prevent significant occlusive symptoms. We observed that the duration of occlusive symptoms ranged from 1 to 6 months. Patients experiencing graft occlusion can present with various combinations of the following symptoms: neck-face swelling, jugular distention, facial erythrosis, dyspnea, headache, and dry cough (5). The severity of the SVC syndrome depends mainly on the rate of progression of SVC obstruction and the degree of development of venous drainage (11,12). For patients with symptomatic graft thrombosis, oral anticoagulation therapy is the first line of therapy to promote the development of collateral venous circulation and reduce clinical manifestations. Medical treatment, including anticoagulation therapy, elevating the head at night, corticosteroids, or diuretics during the acute phase can also be useful (8).

In a study by Lanuti et al., unilateral reconstruction of the BCVs yielded satisfactory long-term patency (4). In this study, graft patency of the left BCV was inferior to that of the right BCV or the SVC. We speculate that the difference in graft patency between the right and left BCVs may have resulted from problems in the left BCV prosthetic graft interposition. Firstly, the prosthetic graft can kink the left BCV at the superior anastomosis site. Secondly, the left BCV can be compressed between the sternum and the ascending aorta. Thirdly, flow velocity tends to be slower in the left graft because it is longer in length. Fourthly, pectinate muscles in the RAA might create turbulence in the blood flow, causing functional failure of the venous system and inadequate venous return against resistance represented by the pectinate muscle of the right atrium at the inferior anastomosis site (2). To prevent anastomosis site kinking, it is recommended that to cut and trim the proximal and distal ends as sigmoid curves in order to ensure a wider orifice, allowing smooth blood flow and preventing kinking of the graft after closing the chest. In addition, the route of the graft should be avoid crossing the ascending aorta and sternum, and the pectinate muscle in the RAA should be completely resected around inferior anastomosis site.

Univariate analyses revealed that potential risk factors related to graft occlusion were left BCV anastomosis (vs. right BCV) and RAA anastomosis (vs. SVC). Of these risk factors, sole reconstruction of the left BCV between the RAA should be avoided in patients undergoing resection of the SVC and the left BCV. Although it is technically more difficult to perform a right BCV to graft anastomosis than a left BCV to graft anastomosis, this approach results in minimal graft angulation and direct downward blood flow aided by gravity (8). In addition, an advantage of using bilateral grafts is that even if one of the grafts is occluded by thrombus formation or local tumour recurrence, the other will likely remain patent (13). Moreover, bilateral reconstruction of BCVs is recommended to prevent significant subclavian venous hypertension and secondary lymphatic occlusion, as well as respiratory insufficiency.

There has been controversy regarding the role of anticoagulation therapy after graft interposition of BCVs or the SVC (3,6,10), and an optimal duration of anticoagulation therapy has not been established. Shintani et al. suggested that longer anticoagulation therapy beyond 6 months might be necessary for patients who have undergone reconstruction of both BCVs to prevent late graft occlusion (6). This practice was based on concerns that a prosthetic graft in a low-pressure flow vascular system such as BCVs or the SVC would be more prone to thrombosis. On the other hand, Okereke et al. reported 38 patients who underwent SVC reconstruction with externally stented-PTFE vascular prostheses (8). They opted for daily aspirin only, and did not observe an excessive thrombosis rate. In our study, warfarin was prescribed to 13 out of 16 patients at discharge, for a period of 3 to 6 months. After that, most patients who interrupted warfarin were treated with aspirin with or without clopidogrel bisulfate. However, we observed graft thrombosis after interruption of warfarin even if aspirin with or without clopidogrel bisulfate was administrated orally. Therefore, we believe that long-term anticoagulation therapy is necessary to prevent graft thrombosis.

This study has important limitations, mostly stemming from its small sample size and retrospective design. A chief issue raised and unsolved in this study is the optimal duration of warfarin therapy. A future large-scale study is necessary to ascertain optimal surgical strategies and management techniques that can guarantee long-term graft patency.

The authors thank Hee Yeon Lee for her medical illustrations.