Video-assisted thoracic surgery (VATS) and thoracotomy are widely used lobectomy procedures for treatment of early non-small cell lung cancer (NSCLC). Compared with thoracotomy, VATS results in less post-operative pain, a lower inflammatory response, and shorter hospital stays (1-5). Recovery of respiration function is better with VATS because VATS does not require dissection of large thoracic muscles (6-9). However, previous studies mainly examined recovery in the first 3 months after surgery; only a few compared VATS and thoracotomy in terms of long-term recovery. Moreover, various factors influence postoperative lung function including preoperative lung function and underlying lung disease (10-13). For accuracy, the results of pulmonary function tests (PFTs) should be adjusted for these factors, but no previous studies have done this. Herein, we compared long-term pulmonary function recovery after VATS versus conventional thoracotomy by using propensity score matching.

The medical records of 488 patients with pathological stage I NSCLC who underwent lobectomy between January 2005 and December 2010 at Seoul University Hospital were retrospectively reviewed. The 285 patients who were lost to follow-up and thus had no PFT data at 6 or 12 months after surgery were excluded. Among the remaining 203 patients, 121 underwent VATS and 82 underwent open thoracotomy. To compare the effects of these procedures on the recovery of pulmonary function, we used propensity score matching to create two matched groups, namely the VATS group and the thoracotomy group, each consisting of 60 patients. Propensity score matching included TNM stage, age, sex, smoking history, presence of lung disease, and preoperative pulmonary function (Figure 1). Information extracted from medical records included age, sex, comorbidities, smoking history, the results of preoperative and postoperative PFTs, and tumor stage, histology, location, and size. This study was approved by the Seoul National University Hospital Institutional Review Board (H-1204-006-403). 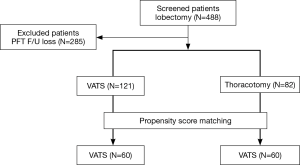 Thoracotomy was performed by making a 20-cm posterolateral incision through the fourth or fifth intercostal space, sparing the serratus anterior muscle. VATS was performed by making three incisions with rib sparing. Two incisions were used as 10-mm thoracoscopic ports, and the third was used as a 5-mm surgical instrument port. A 5-cm access was located anteriorly in the fourth or fifth intercostal space. Complete lymph node dissection was usually carried out along with VATS or thoracotomy. The surgical approach was chosen based on clinical attributes such as tumor size and patient age, general condition, and pulmonary function. It was selected by the two attending thoracic surgeons who performed the operations.

Values are expressed as mean ± standard deviation or as number and percent. Data were analyzed by using the Student’s t-test for continuous variables and the chi-square for categorical variables. The Student’s t-test was used for intergroup comparisons, and the matched-pair t-test was used for intragroup comparisons. Differences with a P value <0.05 were considered significant. The SPSS 19.0 statistical program (Chicago, IL, USA) was used for the analysis.

A total of 203 patients were analyzed; 121 had undergone VATS, and 82 had undergone thoracotomy. After propensity score matching according to TNM stage, age, sex, smoking history, lung disease history, and preoperative pulmonary function, two groups (the VATS and thoracotomy groups) were created, each consisting of 60 patients (Figure 1). Table 1 shows the baseline characteristics of the patients in each group. There were no significant differences between the groups, excepting tumor size, which was significantly larger in the thoracotomy group. The most common histologic type in both groups was adenocarcinoma. Both groups had similar baseline PFT values. 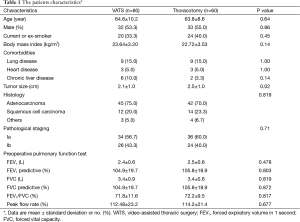 Changes in pulmonary function with time

Table 3 shows the standardized functional loss ratios for FVC, FEV1, and PFR at the 6-month and 12-month follow-up. There were no significant differences in these ratios at either time between the VATS and thoracotomy groups. Figure 3 shows the functional loss ratios for FEV1 and FVC. In an intragroup analysis, the postoperative FVC in the thoracotomy group remained below the predicted postoperative value during the follow-up period and did not reach the predicted postoperative FVC (6 months/12 months: –6.58%/–2.43%). The FVC at 6 months was significantly lower than the predicted baseline FVC in this group (–6.58%, P<0.005).

Figure 3 FEV1 (A) and FVC (B) at 6 and 12 months after surgery in patients undergoing VATS (solid line) and conventional thoracotomy (dashed line). The midline shows the predicted postoperative value, and the area under this line indicates that the measured value does not reach the predicted value. Values are expressed as mean ± standard deviation. MOD, month after operative day; FEV1, forced expiratory volume in 1 second; FVC, forced vital capacity; VATS, video-assisted thoracic surgery. 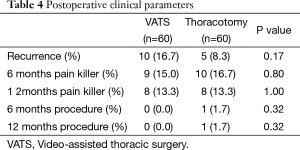 Lobectomy with lymph node dissection is a standard treatment for stage I NSCLC, and conventional thoracotomy and VATS are popular lobectomy approaches. Thoracotomy provides excellent exposure of the thoracic organs, but requires dissection of large muscles and the ribs (15). VATS is a minimally invasive procedure that uses a small-access incision and does not require large muscle dissection. Our study compared pulmonary function and postoperative pain according to these two procedures.

Previous studies demonstrated that VATS better promoted the recovery of early postoperative pulmonary function than did conventional thoracotomy. Nakata et al. (8) showed better recovery of pulmonary function and oxygenation in patients receiving VATS compared with those receiving thoracotomy, as assessed 4, 7, and 14 days after surgery. Another study, which examined recovery up to 3 months after surgery, had a similar result (7). Because VATS causes minimal injury to the chest wall, it causes less postoperative pain and physiologic stress than thoracotomy. Our results do not dispute previous data suggesting that postoperative pain is the main impediment of short-term recovery after pulmonary resection (5,15,16).

Importantly, our results differ from those of the aforementioned studies, which evaluated early postoperative lung function. In our study, the surgical method did not significantly affect the outcomes of the PFTs in the late postoperative period. We presume that there were no differences in the rates of postoperative pain or pulmonary complications between the VATS and thoracotomy groups during this period: their need for analgesics or nerve blocks and the complication rates were similar. Therefore, we suggest that pain influences pulmonary function only in the early postoperative period and that the surgical method that generates less pain better preserves short-term pulmonary function (16). On the other hand, preservation of long-term pulmonary function depends on the volume of the resected lung, preoperative lung function, and underlying lung disease. Because it is generally believed that these factors influence postoperative pulmonary function, we adjusted for them via propensity score matching (17,18). We also calculated the predicted baseline lung function values and standardized functional loss ratios by using specific formulas adjusted for resected lung volumes.

After lobectomy, complete recovery of pulmonary function requires 6 to 12 months (19). The remaining lung tissue distends for 6 to 12 months to fill the resected part of the lung, thus promoting gas exchange (20). Serial intragroup PFT analyses showed a reduced postoperative FVC in the thoracotomy group at 6 months that did not reach the predicted baseline FVC until 12 months. In contrast, FVC in the VATS group continued to improve up to 12 months. Although there were no differences in pulmonary function recovery according to surgical method, the rate of recovery may have been lower in the thoracotomy group during the long-term follow-up period. It may be associated with the incomplete recovery of full muscle strength and further studies are needed.

Our study had two limitations. First, because lung perfusion scans were not performed, postoperative lung function could not be exactly predicted. Nevertheless, this would not have appreciably affected our results because we used a formula suitable for resected lobes. Second, our study had a retrospective design and a small patient cohort. Despite these limitations, it had some strengths. We adjusted for various factors that may have affected postoperative lung function (e.g., TNM stage, age, sex, smoking history, lung disease history, and preoperative pulmonary function) via propensity score matching. For example, compensated distension of the lungs after surgery is variable in patients with lung disorders such as chronic obstructive lung disease (18). Group matching allowed us to accurately assess the impact of the surgical method on lung function. As another strength, the formula we used to calculate the postoperative predicted value was adjusted for resected lung volume. Our study provides convincing results regarding long-term lung respiratory recovery after VATS and thoracotomy that will help clinicians select the appropriate surgical method.

This study was a retrospective review of pulmonary function in patients who underwent VATS or thoracotomy for pathological stage I NSCLC. There were no significant differences in pulmonary function recovery during the late postoperative period after either lobectomy procedure. We suggest that the volume of the resected lung and preoperative lung function, rather than postoperative pain, are the main determinants of late recovery. However, the thoracotomy group had a worse recovery than predicted by the baseline value. Further prospective studies will be necessary owing to the limitations of this retrospective study.