Lung cancer is the leading cause of cancer death globally (1), and adenocarcinoma is the most common histologic type (2). Often situated at the periphery of the lung, pulmonary adenocarcinoma commonly displays a mix of microscopic features (3). A newly proposed classification of adenocarcinoma subtypes has been formulated jointly by the International Association for the Study of Lung Cancer (IASLC), the American Thoracic Society (ATS), and the European Respiratory Society (ERS) (3). According to revised criteria, five major histopathologic patterns (acinar, papillary, micropapillary, solid and lepidic) are recognized and occur in varying ratios as tumor components. Furthermore, each of these elements impacts prognosis differently (4,5).

Using these microscopic parameters, the impact of morphology on prognosis in adenocarcinoma is currently under investigation (6-9). However, no study as yet has linked microscopic features and prognosis with tumor location (i.e., central vs. peripheral). Among non-small cell lung cancers, squamous cell carcinoma (SqCC) is classifiable by primary location as central (encompassing most of these cancers) or peripheral type. One particular study has found that SqCC differs by location, noting a better prognosis in peripheral tumors, and that peripheral SqCC is on the rise (10). Other sources have also elaborated upon clinicopathologic and biologic variability in central and peripheral types of SqCC (11,12), although more work is clearly needed. Central and peripheral adenocarcinoma is subject to such variability as well.

This study was conducted to compare clinicopathologic characteristics of central and peripheral adenocarcinoma, exploring pathologic and biologic differences primarily through micromorphologic analysis. In addition, location-related differences in degree of tumor differentiation and patient prognosis were investigated.

Between August, 2010 and December, 2013, a total of 486 patients diagnosed with non-small cell lung cancer (NSCLC) underwent complete curative resection at Seoul St. Mary’s Hospital in Korea. Of these, 321 patients with adenocarcinoma qualified for retrospective chart review. After excluding 13 patients who were given induction chemotherapy prior to surgery (possibly altering tumor characteristics), 308 patients were ultimately included in the study. TNM staging was based on the 7th American Joint Committee on Cancer (AJCC) guidelines (13). Operative procedures included wedge resection, segmentectomy, lobectomy, bilobectomy, and pneumonectomy. Systemic lymph node dissection (en bloc) or sampling (partial node resection) was carried out in most instances, encompassing more than three mediastinal lymph node stations. Tumor recurrence anywhere within ipsilateral hemithorax was considered locoregional equating distant recurrence with extrathoracic involvement. Any pulmonary nodule harboring a lepidic growth pattern was viewed as metachronous (rather than recurrenct) lung cancer. This study was approved by the institutional Review Board of Seoul St. Mary’s Hospital (The Catholic University of Korea).

Central lung lesions were defined as a tumor location limited to the trachea, bronchi, or segmental bronchi; and peripheral lesions as a tumor location limited more to the periphery than the subsegmental bronchi (10,11,14,15). Pathology reports of all specimens were rendered by certified pathologists, and adenocarcinoma subtyping adhered to the 2011 revised classification (IASLC/ATS/ERS). In particular, five major proliferative patterns (acinar, papillary, micropapillary, solid, and lepidic) of tumors were quantified microscopically in 5% increments (3).

Clinicopathologic characteristics of central and peripheral adenocarcinoma at all stages were compared, conducting the same comparison for selectively for stage-I adenocarcinoma. Student’s t-test was used for continuous variables, and χ2 test was applied for categorical variables. Follow-up data for the interval between surgical resection and last follow-up visit were analyzed, using confirmed recurrences/deaths to calculate recurrence-free survival (RFS) via Kaplan-Meier method. Survival of each group was compared by log-rank test, and the Cox proportional hazards model of multivariate analysis was engaged to determine risk of recurrence in stage I pulmonary adenocarcinoma. A value of P<0.05 was considered statistically significant.

Among 308 patients with pulmonary adenocarcinoma at all stages, 41 (13.3%) lesions were central, and 267 (86.7%) were peripheral. Clinical characteristics of study population are summarized in Table 1, stratified by central and peripheral tumor locations. These population subsets were similar in age, male-to-female ratio, and smoking history. Right upper lobe was most often affected in both groups (39.0% and 36.0%, respectively), and lobectomy was primarily performed (92.7% and 83.9%, respectively). Although some resections were limited [central adenocarcinoma: segmentectomy, 1 (2.4%); peripheral adenocarcinoma: wedge resection, 20 and segmentectomy, 17 (13.9%)], the groups did not differ significantly by extent of surgery (P=0.152). Mediastinal node evaluation was done routinely (100% vs. 89.2%; P=0.043), and video-assisted thoracoscopic surgery (VATS) usually took place (90.2% and 86.9%, respectively). Mean maximum standardized uptake value (SUVmax) of fluorodeoxyglucose on positron emission tomography (PET) was higher in central (vs. peripheral) lesions (6.1 vs. 4.0; P=0.004). 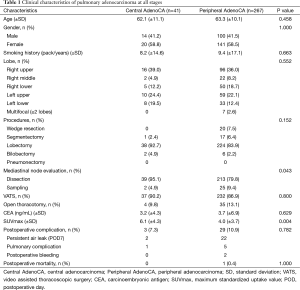 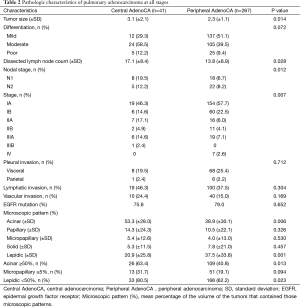 To better assess tumor subsets, clinicopathologic characteristics of patients with stage-I pulmonary adenocarcinoma [central, 25 (10.5%); peripheral, 214 (89.5%)] were compared (Table 3). Age, gender, smoking history, tumor site (lobe), extent of surgery, mediastinal node evaluation, CEA, and SUVmax did not differ by group. Although mean size of central tumors tended to be larger (2.4 vs. 2.0 cm), statistical significance was not reached (P=0.091), and degrees of differentiation were similar for these subsets. Mean dissected lymph node count for central adenocarcinoma also exceeded that of peripheral adenocarcinoma (16.8 vs. 12.8; P=0.035), but extent of invasion (pleural and lymphatic/vascular) and the frequency of EGFR mutation were comparable, as were observed percentages of microscopic growth patterns. 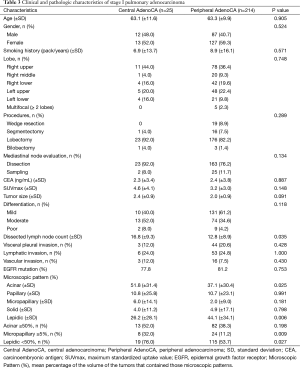 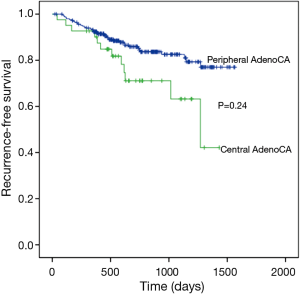 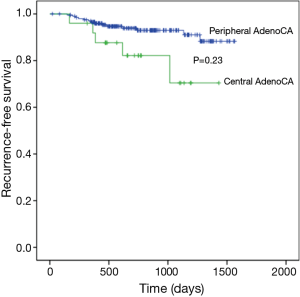 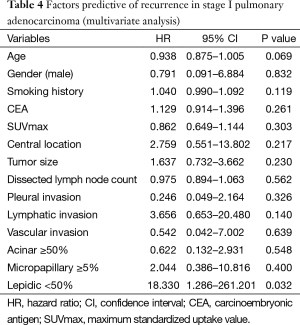 Pulmonary adenocarcinoma generally occurs in peripheral lung tissue, although centrally located primary tumors are not uncommon. In this study, central lesions accounted for 13.3% of all patients undergoing surgical resection. Despite the fact that central and peripheral adenocarcinoma are believed to differ fundamentally, there has been no formal documentation to date confirming this precept, and at least some of our data seem to refute this. For example, one may assume a link between central adenocarcinoma and smoking (16), but our patient subsets were similar in terms of smoking history. In comparing all stages of central and peripheral adenocarcinoma, central adenocarcinoma was often more advanced (i.e., larger primary tumor) and more likely to involve nodal metastasis. On the basis of patient outcomes, however, it could not be said that central adenocarcinoma behaves more aggressively, but it is likely to present at a more advanced stage. In terms of the major microscopic patterns used for classification purposes, only acinar and lepidic growth differed significantly by tumor location. Lepidic elements are apt to appear in early-stage pulmonary adenocarcinoma, which explains their relative scarcity in more advanced tumors that are centrally located.

For better insight, central and peripheral tumors at stage I only were compared. Again, clinicopathologic characteristics generally did not differ, with the exception of a significant disparity in microscopic features. As in pulmonary adenocarcinoma overall, stage I central tumors displayed more acinar growth patterns (likely to invade) and fewer lepidic areas (unlikely to invade). In other words, higher malignant potential may be ascribed to central adenocarcinoma, given its more invasive attributes (4). Furthermore, micropapillary growth ≥5% and lepidic content <50%, both imparting a poor prognosis (4,7,17-20), were more frequently seen in central (vs. peripheral) adenocarcinoma. Thus, microscopic features of central adenocarcinoma signaled a comparatively worse prognosis for stage I disease (and therefore heightened malignant potential), even though other clinicopathologic characteristics of central and peripheral lesions were similar.

Using the Cox proportional hazards model for multivariate analysis, risk factors for 3-year recurrence of pulmonary adenocarcinoma at stage I disease were assessed. Accordingly, a lepidic growth pattern <50% was identified as the sole statistically significant prognosticator for recurrence (HR=18.330; P=0.032). In central PA, fewer lepidic areas amounting to <50% of tumor were found by comparison. Although central location did not impact RFS to a statistically significant extent, differing lepidic growth in central and peripheral tumors may explain the disparate prognoses observed by location in early-stage disease. Thus it appears that central adenocarcinoma poses a greater risk of recurrence than does peripheral adenocarcinoma, based on microscopic attributes.

Disease-specific prognosis better reflects cancer-related RFS, as opposed to overall survival. Moreover, overall survival is a poor gauge of prognosis in stage I disease comparisons, because deaths are less likely a direct result of cancer (4). For this study, comparison of cancer-specific prognosis was our aim, examining RFS overall and separately at stage I. Given that our data was so recent, 3-year survival was the only option for analyzing prognosis. Our facility initiated VATS fairly recently, starting in August, 2010. Due to inconsistencies in technique, surgical data generated before that date was disqualified, thus limiting our resources. In addition, efforts made since then to ensure staging accuracy included mediastinal lymph node dissection or sampling in most patients. Likewise, standard histomorphologic assessments at our facility as of 2011 incorporated the new IASLC/ATS/ERS international multidisciplinary classification of lung adenocarcinoma (transitioning with some patients in late 2010). Thereafter, accuracy and consistency of recorded data was ensured. Comparing prognosis via 3-year RFS seemed reasonable, knowing that postoperative recurrences of non-small cell lung cancer typically occur within 2 years and that any cancer surfacing after 2 years has a good possibility of being metachronous (21). Of note, a related study has documented that 2-year recurrence reflects overall prognosis of surgically resected lung cancer, especially in early stage disease (22).

Peripherally situated adenocarcinoma enabled wedge resection of suitably small lesions, especially ground glass opacity nodules. Due to access issues, adenocarcinoma in central locations usually required lobectomy, regardless of tumor size or opacity. If more than lobectomy was needed, mediastinal lymph node evaluation (dissection or sampling) was routinely performed at the same time in most central tumor resections resulting in higher nodal counts for greater accuracy of staging. Hence, operative procedure had no bearing on the lower RFS rate we determined for central adenocarcinoma.

Some researchers also maintain that the clinicopathologic and prognostic profiles of central and peripheral SqCC in the lung are fundamentally different (10,11). However, studies comparing central and peripheral adenocarcinoma have been few, and none has addressed the inherent micromorphologic heterogeneity of these tumors. Staging of esophageal cancers (SqCC), which sometime differ in tumor progression and prognosis, reflects tumor location (13). Perhaps tumor location is a matter of importance in the staging of non-small cell lung cancers as well. Of course large-scale clinical studies and molecular-level biologic investigation would be needed for corroboration.

A number of study limitations are acknowledged, the first being that this was retrospective review conducted at a single center. The small patient sampling with fewer instances of central adenocarcinoma also may have introduced bias. Greater data accrual through multicenter studies may remedy this problem. As already explained, the short follow-up duration was also a weakness. Regardless of the importance assumed by pathologic features of pulmonary adenocarcinoma, RFS was limited to a 3-year period rather than the customary 5-year interval relied upon for prognostication. Still, most recurrences of non-small cell lung cancer are known to occur within a 2-year time frame (21), and early recurrence has been shown to mirror extended prognosis (22).

In conclusion, centrally located pulmonary adenocarcinoma is detected in an advanced stage for many patients. Even with standard resection and mediastinal lymph node dissection, central tumors overall and in stage I disease have a poorer early prognosis than peripheral lesions. This disparity is related to the microscopic features of these cancers, particularly a notable departure in extent of lepidic growth. With a pursuit of large-scale micromorphologic and molecular biologic studies, the impact of location on intrinsic properties of adenocarcinoma may be better understood.

This article has been edited by native English-speaking experts of BioMed Proofreading, LLC.