A primary malignant melanoma of the mediastinum with gross surgical view

A 32-year-old man with an unremarkable medical history was referred to our hospital because of persistent hoarseness for 2 months. Physical examination revealed right-sided vocal cord palsy. A chest computed tomography (CT) scan revealed a right, anterosuperior mediastinal mass, and a whole-body positron emission tomography (PET) scan revealed a high standardised uptake value (SUV) of 8.5, with a photon defect in the same area as the lesion without the evident of distance metastasis (Figure 1). The imaging findings indicated that the hoarseness was caused by compression of the right recurrent laryngeal nerve by the mediastinal mass. Fine needle aspiration was performed, but a diagnosis could not be made on the basis of its findings. A surgical biopsy was performed through transclavicular approach to remove anterosuperior mediastinal mass. The mass resembled black, gelatinous glue; occupied the right anterosuperior mediastinal mass; and affected the right recurrent laryngeal nerve beneath the right subclavian artery, which was the proposed cause of the patient’s vocal cord palsy (Figure 2). Histopathological analysis of the biopsy sample revealed a malignant melanoma (Figure 3); and surgical resection was performed. Because no similar lesions were observed at other sites of the patient’s body, the patient was diagnosed as a primary malignant mediastinal melanoma. One week after surgery, he was discharged without any complications. The patient now visits our hospital for routine medical check-ups to allow for early detection of any tumour recurrence.

Figure 1 Radiology examination. (A) Chest computed tomography (CT) examination revealed a right superior mediastinal mass with a calcified spot; (B) a positron emission tomography (PET) scan showed a high standardised uptake value (SUV) of 8.5 with a photon defect area; (C) the mass was only detected in the right superior mediastinum on a PET scan. 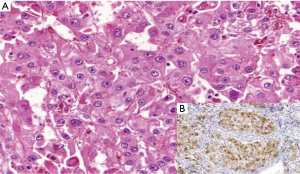