A 43-year-old woman visited our hospital due to a sudden onset of dyspnea, which had continued for 4 days. She had suffered with pulmonary tuberculosis 21 years previous. Even though she was administered first and second line anti-tuberculosis drugs, no culture was negative after completion of treatment. For the past 2 years, she has been administrated a third line drug regimen; linezolid, pyrazinamide, amikacin, moxifloxacin, and clarithromycin, and the resulting tuberculosis culture was negative. She has had progressively worsening shortness of breath over the past 6 months.

On physical examination, there was no audible breathing in the right side of her chest. She was suffering from wheezing and rales in the left side of her chest. Computed tomography (CT) showed a completely collapsed left lung, extreme deviation of the mediastinal structure, and a narrowed right main bronchus, which was compressed between the right main pulmonary artery and the vertebral body (Figure 1A,B). 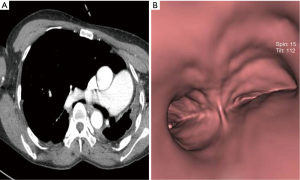 An operation was performed via a left postero-lateral thoracotomy. First, we carefully performed an extrapleural dissection to reposition the mediastinum enough to rotate the heart and the mediastinal structure and implant a 300 mL normal saline breast bag. Intraoperative flexible bronchoscopy was performed to assess the patency and stability of the airways. The postoperative period was uneventful, and a post-operative CT scan of the chest showed a markedly increased right main bronchus and a well-positioned prosthesis in the pleural cavity with the mediastinum shifted to the medial side (Figure 2A,B). The patient was discharged 16 days after the operation. At the 2 years follow-up, FEV1 had improved from 14% to 23% and only slightly limited her ability to work. 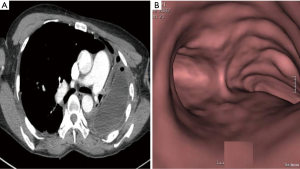 Figure 2 Postoperative chest computed tomography (CT) and three-dimensional reconstruction endo-bronchial CT. (A) Post-operative CT scan of the chest showed the markedly increased right main bronchus and a well-positioned prosthesis in the pleural cavity, with the mediastinum shifted to the medial side; (B) three-dimensional reconstruction endo-bronchial CT showing improved lumen size in the right main bronchus.

However, there is one clinical difference between the two diseases with respect to the destroyed lung; i.e., it is important how the lung is managed. It is questionable whether a pneumonectomy is necessary. Lee, who first reported the surgical treatment of postpneumonectomy-like syndrome, recommended that a pneumonectomy must precede the repositioning of the mediastinum (5). However, in his report he did not explain the reason why the pneumonectomy is necessary. The reported incidence of complications and mortality due to a pneumonectomy is high. Also, if the patient has had a pleuropneumonectomy, such as in our case, the possibility of morbidity or mortality is increased. We considered that if the destroyed lung did not cause any clinical problems over a long period, its removal was not mandatory, but was an option.

Additionally, most usable tissue expanders are not approved for permanent use, and it is not appropriate to use several, or large, tissue expanders (6). The breast saline bag has been approved for permanent use, and it has sufficient long-term safety. Therefore, we considered a breast saline bag as a good alternative for use as a volume expander. The breast bag has a disadvantage, as there is no large breast saline bag able to fill a volume greater than 300 mL, and it can only be used for small volumes. If a pneumonectomy is performed, then a greater volume needs to be filled in the thoracic cavity; a volume greater than 500 mL, up 1,500 mL, will be required to fill the thoracic cavity. Therefore, if a surgeon wants to use a saline bag, it is better not to perform a pneumonectomy of the destroyed lung; its preservation will help to obtain a sufficient mediastinal shifting effect with the insertion of a small volume.

Therefore, due to the above reasons, we decided not to perform a pneumonectomy and to perform an extrapleural dissection and implantation of a silicon bag only. This technique also allowed us to perform simpler and safer surgery, reducing the volume that needs to be filled by the volume expander in the thoracic cavity. The remaining lung did not develop a clinical problem during the 2 years of follow-up. In conclusion, like postpneumonectomy syndrome, insertion of a volume expander for mediastinal shifting is the most effective treatment for postpneumonectomy-like syndrome. However, there is controversy regarding whether or not to perform a pneumonectomy. The clinical situation of each patient must be considered.