Blunt chest trauma frequently produces pulmonary contusions, hematomas or effusions, but rarely leads to the appearance of a cystic lesion (1). These cystic lesions are stated in the literature as pseudocysts, since the injured area does not include epithelium or bronchial wall elements as it is in a true cyst, nor it is a result of an infectious process as in a pneumatocele presented in children (2). The traumatic lung pseudocyst is a rare complication of closed thoracic injury in which increased pressure on pulmonary parenchyma causes laceration (shearing) of the parenchyma without rupture of the pleura. It is most often seen in children and young adults in whom the thorax is elastic (1). Manifestations of traumatic pulmonary pseudocysts are hemoptysis, chest pain, cough, dyspnea, mild fever, and leukocytosis (3). Accurate diagnosis of traumatic pulmonary pseudocysts is done with the help of computer tomography and they are detected by chest radiographs alone in only 50% (3). The clinical course of traumatic lung pseudocyst is usually benign, requiring only supportive therapy unless complications such as pneumothorax or infection of the cavitary lesion arise (4).

A 19 years old man was admitted in the ICU after a motorcycle accident. The patient’s past medical history was free. He was smoker and often abused alcohol. His origin was from a country with high prevalence of tuberculosis, but he was living in Greece for more than 10 years. His Glasgow Coma Scale (GCS) before intubation was 6.

Imaging investigation using chest X-rays (Figure 1) showed right pneumothorax with a suspicion of cavity formation in the right upper lobe. A chest tube was then inserted.

Following imaging investigation the patient was operated by neurosurgeons in order to remove the epidural hematoma. During his hospitalization in the ICU the patient was hemodynamically stable and presented only with low grade fever and 1-2 febrile waves up to 38.4 °C. The patient was treated with common antibiotics.

Four days after admission chest X-ray (Figure 3) and chest CT (Figure 4) were repeated and showed two cavitary lesions in the upper lobe (front and rear) with tree in bud sign in the rear section of the right lower lobe. Based on these findings and on patient’s history differential diagnosis included tuberculosis and traumatic pulmonary pseudocyst.

These findings excluded the diagnosis of tuberculosis and were compatible with the diagnosis of traumatic pseudocyst. The patient showed gradual clinical improvement and after a few days he was transferred to the Neurosurgical department.

Figure 1. Chest X-ray on day of admission with pneumothorax (a chest tube is already inserted) and suspicion of cavity formation in the right upper lung lobe. 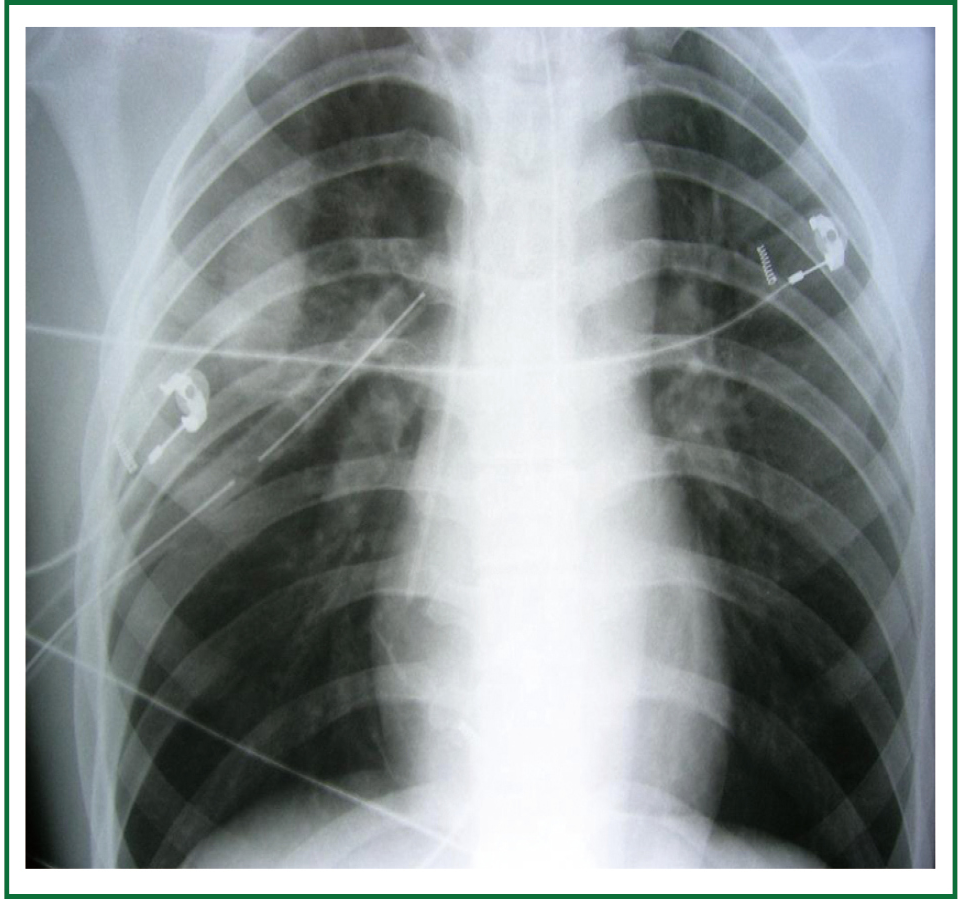 Figure 2. Chest CT on day of admission with well defined densities in the right upper lung lobe (with presence of air bubbles within them) and ground glass appearance of the pulmonary parenchyma. 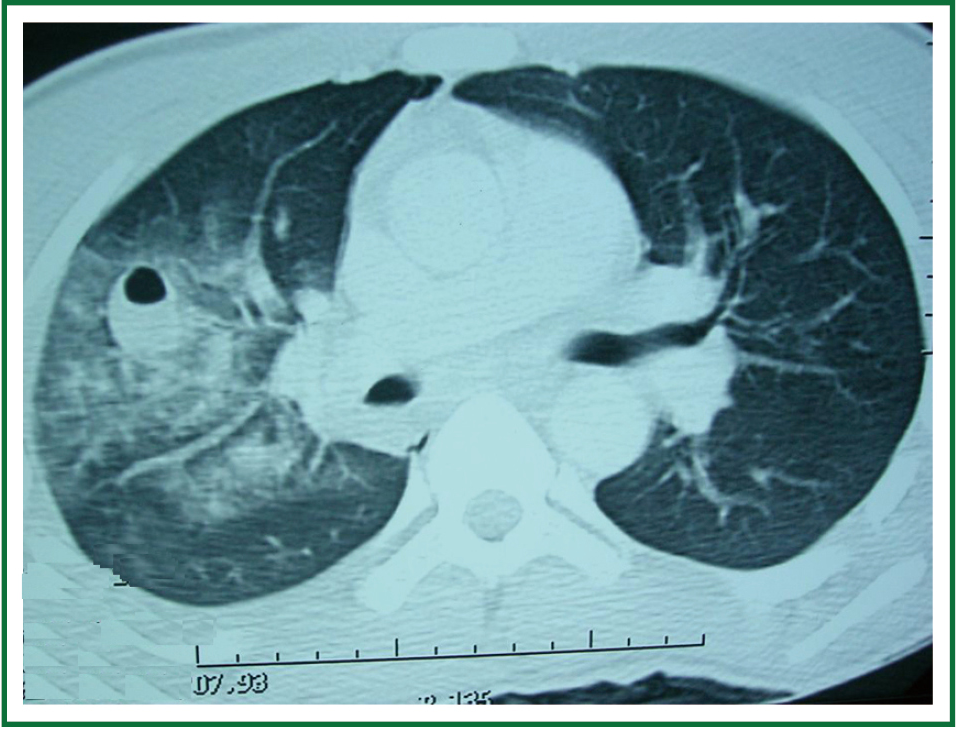 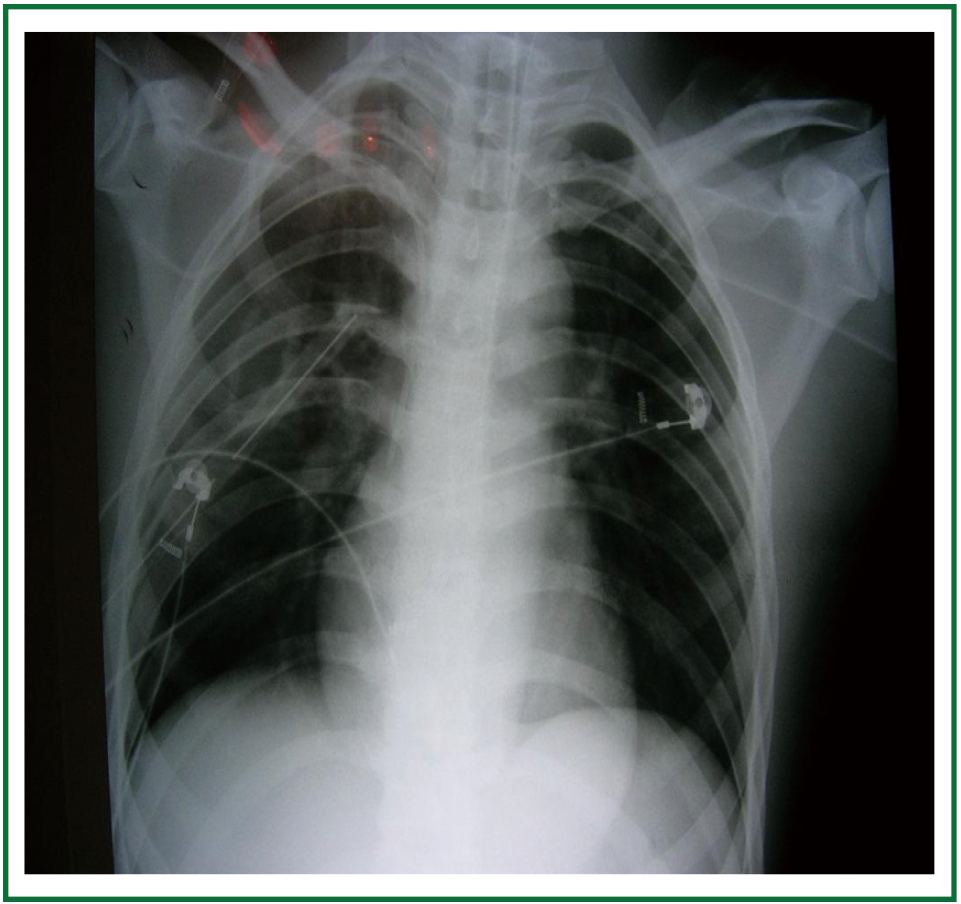 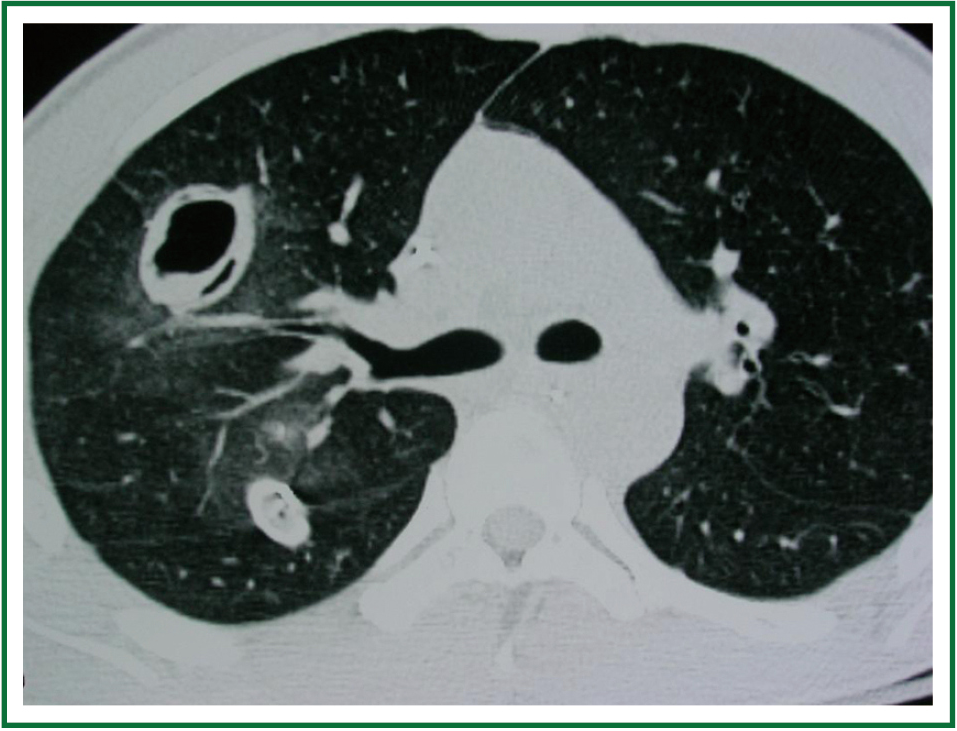 Figure 5. Chest CT scan after 6 months was within normal limits. 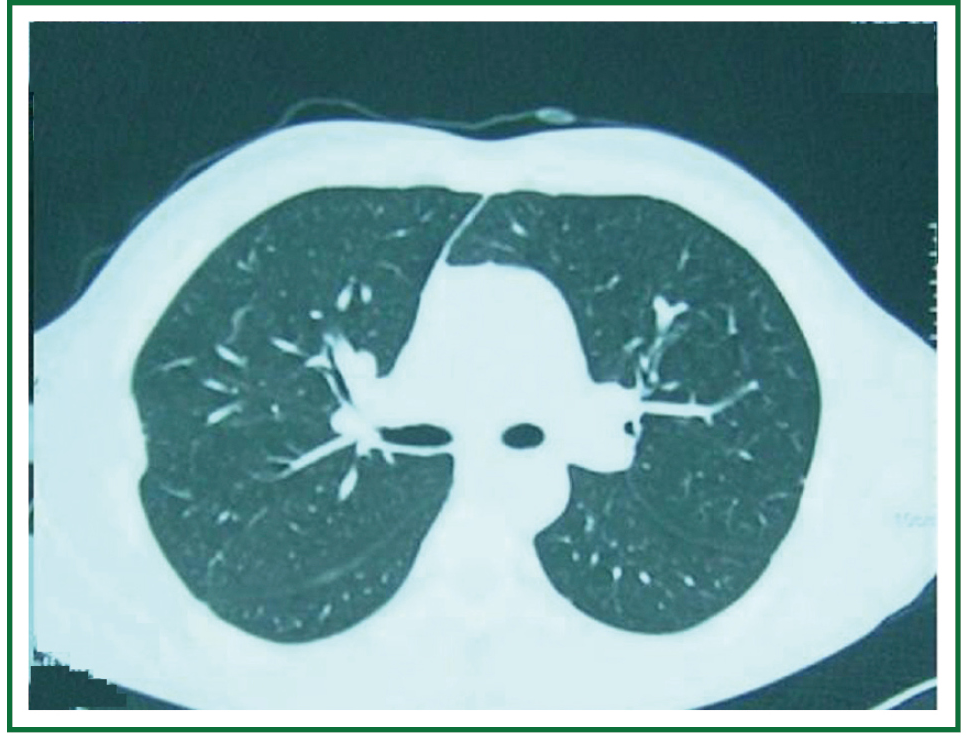 A 41 years old man was involved in a car-bicycle accident (he was riding the bicycle). The patient’s past medical history was free. The patient was admitted in the ICU with respiratory failure and flail chest. Chest X-ray (Figure 6) and Chest CT scanning (Figure 7) revealed subcutaneous emphysema, multiple bilateral rib fractures, fracture of the right clavicle, fracture of the sternum, right pneumothorax, bilateral hemothorax, and contusions of the right lung.

A chest tube was placed in the right pleural cavity. The next day the patient was intubated because of progressive respiratory failure. Two days after admission chest CT (Figure 8) was repeated and showed formation of lung pseudocyst, remaining pneumothorax and hemothorax.

The clinical course was complicated with febrile respiratory infection and haemodynamic instability. He was treated with broad spectrum antibiotics. A tracheostomy was performed seven days after his admission. The patient was gradually stabilised and finally was weaned from mechanical ventilation.

22 days after the accident the chest CT (Figure 9) revealed resolution of the pseudocysts, and bilateral pleural effusion. The patient was transferred to the Pulmonology clinic. 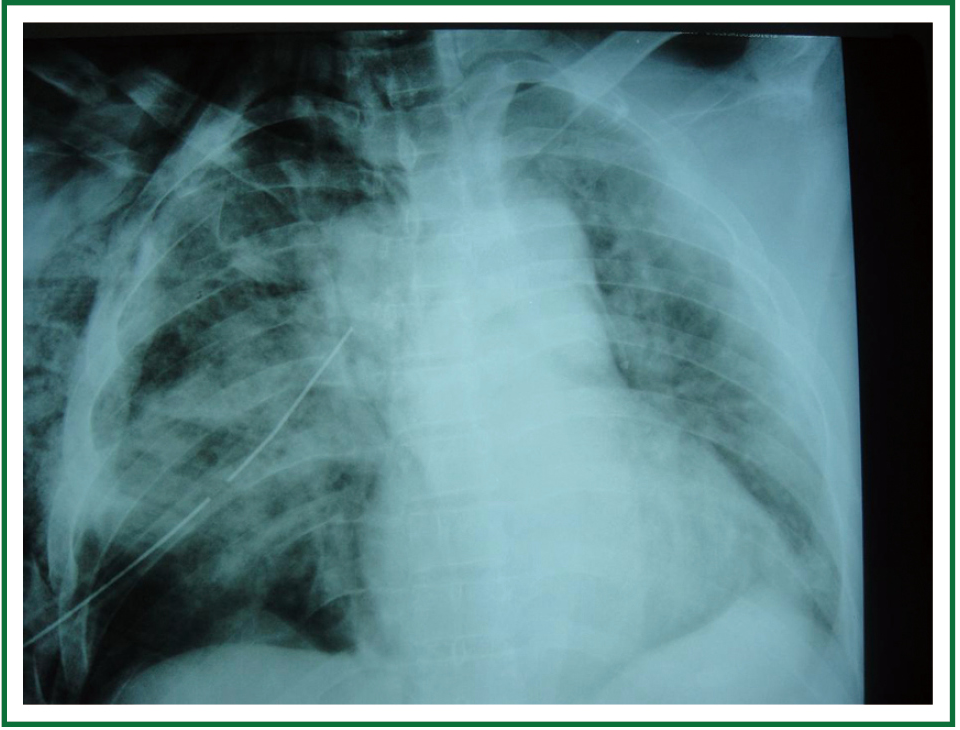 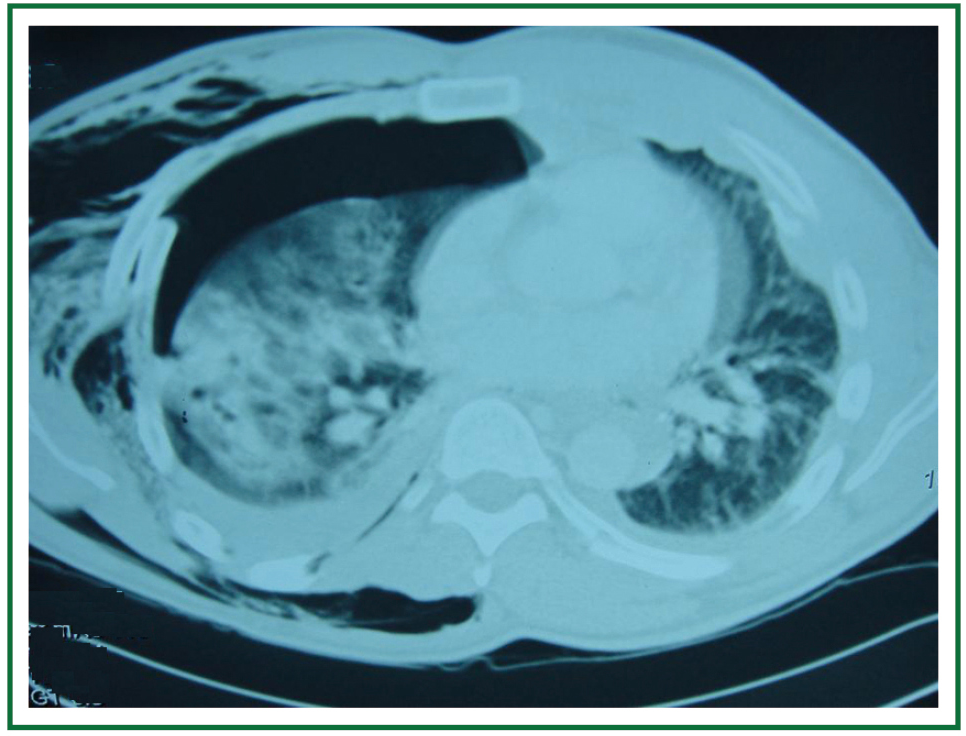 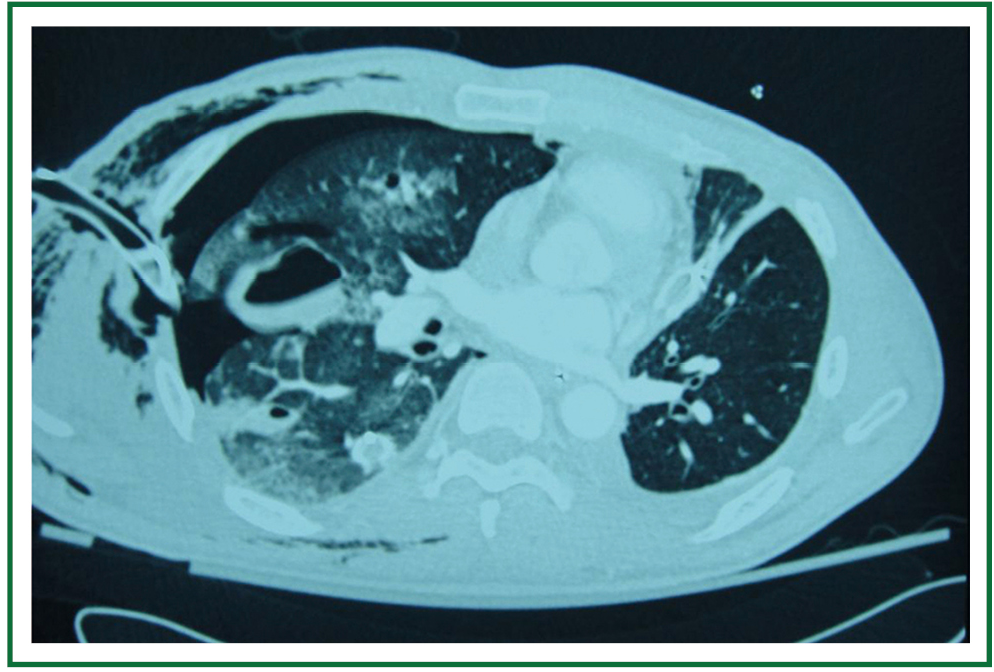 Figure 9. Chest CT 22 days after the admission with resolution of the pseudocysts. 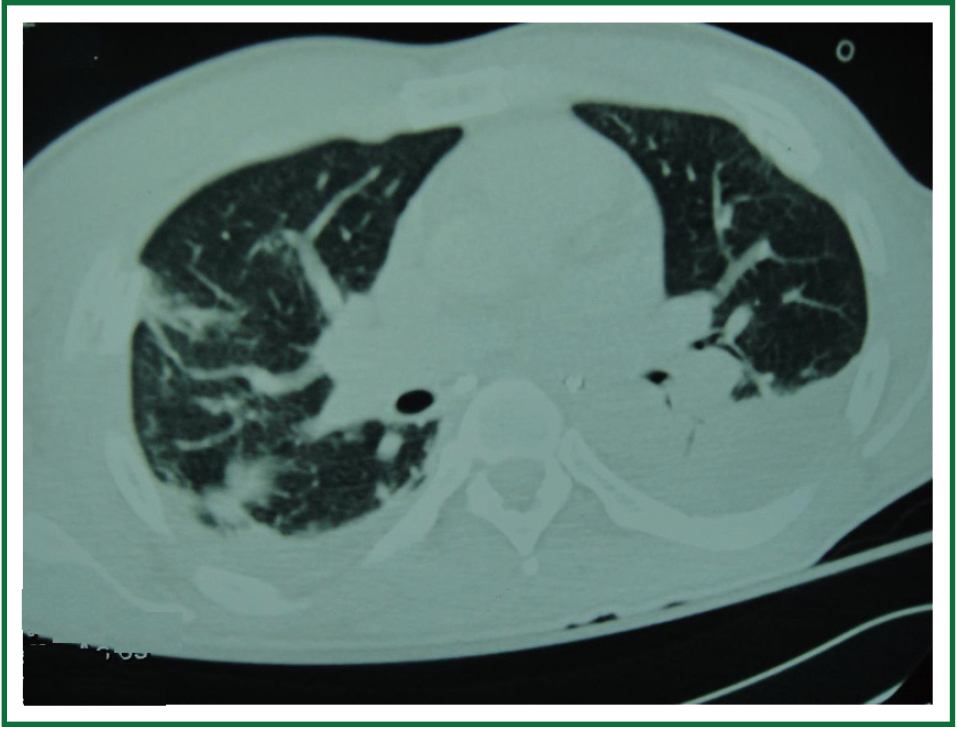 Blunt chest trauma frequently produces pulmonary contusions, hematomas or effusions, but can also rarely lead to the formation of cystic lesions called pseudocysts (4,5). Eight-five percent of patients with traumatic lung pseudocysts were reported to be younger than 30 years old (6).

The mechanisms of the creation of lung pseudocysts are considered to be:

(I) In blunt chest trauma increased pressure within the underlying pulmonary parenchyma on impact, causes laceration (shearing) of the parenchyma without rupture of the visceral pleura, resulting in the formation of cavities.

(II) Another possible mechanism is the sudden increase and then reduction of intrapleural pressure on impact, which when is higher than lung’s compliance, causes tearing of the parenchyma (5,7). It is thought that the greater compliance of the chest wall in younger people permits larger transmission of the force of impact to the pulmonary parenchyma. This justifies the young age of patients with pseudocyst formation (4,8).

The traumatic lung pseudocysts may be evident in chest X-ray immediately after the trauma or within a few hours after the injury. If however, the cyst is full of bleeding material it may not be visible until after a few days, when the bloody material is drained through the tracheobronchial tree (4,9). The diagnosis of traumatic lung pseudocysts with X-ray alone is possible in 50% of the cases (3,10). The CT scan is more sensitive than a simple X-ray to detect such lesions. It is speculated that many mild cases of pseudocysts may go unnoticed if not checked with CT. Their size range from 2 to 14 cm in diameter (11).

Characteristic symptoms of traumatic lung pseudocyst are haemoptysis, chest pain, dyspnea, cough, and sometimes a small rise in temperature in the early days after the trauma. From the laboratory tests a mild leucocytosis may be present (4).

The differential diagnosis includes postinfectious pneumatocele, tuberculous or mycotic cavity, pulmonary abscess, cavitating carcinoma, cavitating or infected hematoma, and ruptured diaphragm with protrusion of bowel into the chest space. The history of trauma and the CT scan of the chest, usually are enough to confirm the diagnosis of pseudocyst (12).

The outcome of traumatic lung pseudocyst is generally good. The cavitary lesion generally diminishes in size and completely resolves within two or three months (10). Only symptomatic treatment with analgesia, respiratory physiotherapy and oxygen seems to be necessary and prophylactic antibiotic treatment is not necessary despite the fever and leukocytosis (5).

However close follow up is recommended because of some rare but very serious complications. These complications that may need surgical treatment are: pneumothorax, hemothorax, infection of pseudocyst - abscess formation and an increase in the size of the pseudocyst due to haemorrhage (5).

In conclusion post-traumatic pulmonary pseudocysts are benign lesions secondary to blunt chest trauma in children and young adults. Usually they diminish in size and resolve within 2-3 months, but close follow up is recommended because of some rare but serious complications such as hemothorax, pneumothorax or infection of the cyst.