Uniportal video-assisted thoracoscopic surgery (U-VATS) was first introduced and applied to anatomical lung resection 10 years ago (1,2); however, its potential advantages over other VATS techniques remains controversial (3-10). A reduction in the number of wounds may help reduce postoperative pain, as well as offer cosmetic benefits (5,6,9,10), but achieving this requires specialist surgical techniques. Furthermore, recent years have seen an increase in opportunities to perform segmentectomy for early-stage primary lung cancer instead of lobectomy (11-14); therefore, more complicated surgical procedures are now required.

In our previous report in 2021 (17), we established a technique for VATS anatomical lung resection, and U-VATS anatomical lung resection has been performed since February 2019. Since, the number of cases has steadily increased (Figure 1). In this study, we compare the perioperative results from U-VATS segmentectomy performed at our institution with those using the conventional method [hybrid/multiportal VATS (H/M-VATS) segmentectomy], as well as evaluated the safety and usefulness of U-VATS segmentectomy. We present the following article in accordance with the STROBE reporting checklist (available at https://jtd.amegroups.com/article/view/10.21037/jtd-22-555/rc). 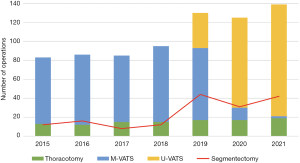 The study was conducted in accordance with the Declaration of Helsinki (as revised in 2013). This study was approved by the institutional ethics board of Japanese Red Cross Maebashi Hospital (approval No. 2020-52). The need to obtain individual patient consent for participation in this research was waived due to the retrospective nature of the analysis.

Data from consecutive patients who underwent anatomical pulmonary segmentectomy for lung lesions at our institution between March 2010 and March 2021 were evaluated retrospectively. We divided the patients into the U-VATS and H/M-VATS groups. Perioperative results were compared between these groups after matching for patient background characteristics. Cases of segmentectomy were then selected from each group, and the perioperative results were compared using the same method (Figure 2). 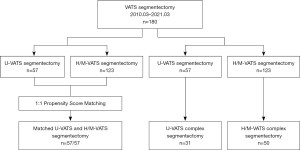 The criteria for selecting patients for segmentectomy at our institution are (I) clinical stage 0–IA1 (Tis-1aN0M0) primary lung cancer confirmed by careful preoperative staging using computed tomography (CT) and/or positron emission tomography/CT (also known as intentional limited surgery); (II) clinical stage IA2–IB (T1b-2aN0M0) primary lung cancer in patients who cannot tolerate radical surgery due to complications and/or poor pulmonary function (passive limited surgery); and (III) metastatic or benign lung tumors for which a sufficient margin was difficult to secure during wedge resection due to the tumor location and size.

All surgeries were performed under general anesthesia with the patient in the lateral decubitus position and under differential lung ventilation. Automatic staplers were usually used for vessel and bronchial transections, but suture ligation using 3-0 silk was performed depending on the vessel diameter or the angle of stapler insertion. For segment identification, an inflation-deflation technique or jet ventilation technique was used initially. However, after May 2020, this was replaced by intravenous administration of indocyanine green and a near infrared light thoracoscope. The intersegmental plane was divided using electrocautery or a stapler. Electrocautery was frequently used until 2015 (in almost all hybrid and a portion of multiportal cases), and the decision to use this technique was made by the surgeon. Two-thirds of the outer area in an intersegmental plane was divided by electrocautery, and the remaining deep parenchyma was further divided using staplers. The use of staplers has increased since 2016, including in the uniportal approach, in which staplers are solely used for almost all cases. Intentional limited surgery is often performed for only pure or part-solid ground-glass nodules with a size of the solid part ≤1 cm, and thus it would be uncommon to perform lymphadenectomy in these cases. In almost all cases, hilar lymph nodes were sampled.

H/M-VATS was performed mainly by three senior surgeons, two of whom also perform U-VATS. The overall surgical approach, particularly in terms of multiportal VATS (M-VATS) vs. U-VATS, was decided by each individual surgeon.

U-VATS for anatomical lung resection was first used in February 2019. Details of the U-VATS procedure have been described previously (17). Briefly, the operator must stand on the ventral side of the patient with an assistant on the dorsal side. A 3.5–4.0 cm skin incision is created in the fourth or fifth intercostal space in the anterior axillary line, and an XS Alexis wound retractor (Applied Medical, Rancho Santa Margarita, CA, USA) is fitted. A 10 mm 30° thoracoscope is then fixed on the dorsal side of the wound margin, securing a space on the ventral side for the surgeon to operate using surgical instruments (Figure 3A). The chest drain is placed on the ventral side of the wound.

The chest drainage tube was removed after confirming both the absence of air leakage and a discharge volume of less than 300 mL. Postoperative complications were evaluated using the Common Terminology Criteria for Adverse Events (version 5.0). Major complications were defined as a requirement for additional treatment. After discharge, patients were followed up in the outpatient clinic on postoperative day 7, then again at 1 month, 3 months, and every 6 months thereafter.

Fisher’s exact test was applied to compare categorical variables. Student’s t-test and the Mann-Whitney U test were used to compare continuous variables. Values of P<0.05 were considered statistically significant.

A total of 180 patients underwent pulmonary segmentectomy during the study period at this institution, comprising 57 cases in the U-VATS group and 123 cases in the H/M-VATS group (Figure 2). The characteristics of all patients (95 males, 52.8%; 85 females, 47.2%; mean age, 69.1 years; range, 29–84 years) are shown in Table 1. There were 110 cases of primary lung cancer, consisting of 62 and 48 cases that received intentional and passive limited surgery, respectively. Before matching, there were slightly more patients with primary lung cancer in the U-VATS group than H/M-VATS group (P=0.014). After matching for age, sex, disease, tumor location and segmentectomy subtype, the two groups were compared (Table 1).

The sites of the resected complex segmentectomies in each group are shown in Table 3. There was no significant difference in the resected segment site between the groups. The perioperative outcomes of U-VATS and H/M-VATS complex segmentectomies are compared in Table 4. The operation time was significantly shorter in the U-VATS group than H/M-VATS group (146±34 vs. 185±47 min, P<0.001). The duration of postoperative drainage (1.5±1.3 vs. 2.2±1.2 days, P=0.021) and postoperative hospital stay (3.0±1.4 vs. 4.9±2.1 days, P<0.001) were also significantly shorter in the U-VATS group. There were no significant differences in the rates of blood loss, major intraoperative bleeding, rate of conversion to thoracotomy, postoperative complications, or re-hospitalization within 30 days after discharge.

The recent transition at our institution from hybrid to M-VATS and subsequently to U-VATS has been successful, and U-VATS segmentectomy has been performed without the problems often associated with other VATS procedures, even in cases requiring complex segmentectomy. The postoperative complication rates were quite low, thereby enabling an early recovery.

The U-VATS group showed superior results to the H/M-VATS group, specifically with regards to operative time. Many previous reports comparing perioperative outcomes between U-VATS and M-VATS revealed that operative time is often faster with U-VATS. It was therefore concluded that U-VATS is a more useful approach than M-VATS, although U-VATS is still considered technically difficult due to interference among instruments and the limited insertion angles caused by inserting all instruments including the thoracoscope from a single small wound (19-22). However, in many of those studies, U-VATS was established after heavy use of thoracotomy or M-VATS. This may cause a bias in the U-VATS results due to a relatively recent learning curve. Our previous study demonstrated the learning curve of thoracoscopic lobectomy for in a single surgeon, and we conclude that implementation of U-VATS dose not negatively affect the learning curve of thoracoscopic lobectomy (23). Nevertheless, it is difficult to empirically determine if U-VATS is superior to M-VATS as a thoracoscopic approach considering that U-VATS was not performed until a later time period. Therefore, we focused on assessing whether U-VATS can be implemented successfully with not only lobectomy but also segmentectomy.

Postoperative drainage duration and postoperative hospital stay were both significantly shorter in the U-VATS group. This is likely because postoperative management has been more aggressive in recent years. For example, earlier removal of the drainage tube and shorter hospital stay are now recommended. Early removal of the chest drainage tube after lung resection has been reported to reduce postoperative pain and improve respiratory function, and is thought to help improve respiratory status and prevent complications (24,25). Therefore, regardless of the thoracotomy type (M-VATS vs. U-VATS), drainage tubes are now removed earlier. Changes in the method of intersegmental division might also have an effect. Electrocautery was often used in the H/M-VATS group, and as reported before (26), this may have affected the difference in drainage duration. Moreover, the enhanced recovery after surgery program (a multidisciplinary clinical care bundle that optimizes pre-, intra-, and postoperative care) was adopted by this institution in 2015, and it may have also contributed to early postoperative recovery and shorter hospitalization. Another important factor is the potential for reduced postoperative pain with U-VATS. As reported previously (27), U-VATS creates only a small wound in the anterior axillary line, which has a relatively wide intercostal space and may therefore produce less pressure on the intercostal nerves, leading to reduce postoperative pain compared with M-VATS, which creates a second wound in the posterior axillary line. Reduced postoperative pain may in turn lead to an earlier recovery and a shortened hospital stay.

There are a few important limitations to this study. First, this was a retrospective, single-center, observational cohort study. Second, since the research period was >10 years, perioperative results were affected by the proficiency of the surgeons and changes in perioperative management, as stated above. Third, after the introduction of U-VATS in 2019, the decision of whether to use U-VATS vs. M-VATS was made by each surgeon for each case, so selection bias may have been present. Finally, due to the short follow-up in the U-VATS group, long-term prognoses could not be examined. In the case of intentional limited surgery for malignant diseases, proving curability is important.

In conclusion, U-VATS segmentectomy appears as safe and feasible as H/M-VATS segmentectomy, even for complex segmentectomy cases. An experienced surgeon can make a smooth transition to U-VATS. A larger number of cases from multiple centers should be examined, with further investigation into long-term prognosis.

Reporting Checklist: The authors have completed the STROBE reporting checklist. Available at https://jtd.amegroups.com/article/view/10.21037/jtd-22-555/rc

Conflicts of Interest: All authors have completed the ICMJE uniform disclosure form (available at https://jtd.amegroups.com/article/view/10.21037/jtd-22-555/coif). HI serves as an unpaid editorial board member of Journal of Thoracic Disease from August 2020 to July 2022. The other authors have no conflicts of interest to declare.

Ethical Statement: The authors are accountable for all aspects of the work in ensuring that questions related to the accuracy or integrity of any part of the work are appropriately investigated and resolved. The study was conducted in accordance with the Declaration of Helsinki (as revised in 2013). The study was approved by the institutional ethics board of Japanese Red Cross Maebashi Hospital (No. 2020-52), The need to obtain individual patient consent for participation in this research was waived due to the retrospective nature of the analysis.