While evidence-based clinical guidelines recommend to perform mitral valve surgery during the aortic valve replacement (AVR) in patients with aortic valve disease combined with severe functional mitral regurgitation (FMR) (1), controversies exist on the treatment of moderate FMR (2,3). A substantial proportion of patients with severe aortic valve disease followed by moderate FMR complicates with heart failure, which is an important clinical syndrome that has been affecting human health.

According to previous studies, the prevalence of HFmrEF among patients ranges from 13% to 26% (6-9), and it shows important influence on the prognosis of the patients. He et al. reports in their study that HFmrEF increases the risk of deterioration of cardiac function after permanent pacemaker implantation (10). Elsewhere, Ovidiu and colleagues notice in their prospective observational study that patients with HFmrEF experience an intermediate rate of death when compared to those with heart failure with reduced or preserved EF (11). Furthermore, researchers also observe in their recent study that among patients undergoing coronary artery bypass grafting, HFmrEF increases the risk of mortality by 30% when compared to those with normal EF (12). As a consequence, patients with HFmrEF should be fully evaluated before determining the treatment strategy.

One of the most important causes of heart failure is the valvular heart disease, including FMR. As mentioned above, debates exist on whether to operate on mitral valve in patients with moderate FMR during the AVR procedure (2,13), while no data exists regarding the impact of concomitant mitral valve surgery on the postoperative outcome in this population of patients who are complicated with HFmrEF.

This study is aimed to investigate the prognostic difference between isolated AVR and AVR + mitral valve surgery in a population of severe aortic valve disease complicated with moderate FMR and HFmrEF during 2010 to 2019 at our institute, and to indirectly evaluate the value of HFmrEF in determining the surgical treatment strategy in this group of patients. We present the following article in accordance with the STROBE reporting checklist (14) (available at https://jtd.amegroups.com/article/view/10.21037/jtd-22-278/rc).

In this single-centered retrospective cohort study, we continuously recruited HFmrEF patients who underwent AVR and complicated with moderate FMR between January 2010 and December 2019 at Fuwai Hospital (Beijing, China), to compare the clinical outcomes of different surgical procedures, including isolated AVR and AVR + mitral valve surgery. The study was conducted in accordance with the Declaration of Helsinki (as revised in 2013). The study was approved by the Institutional Review Board at Fuwai Hospital (No.: 2021-1585) and individual consent for this retrospective analysis was waived.

As mentioned above, we enrolled adult patients who underwent AVR and complicated with moderate FMR as well as HFmrEF during the study period at our center. The exclusion criteria included the patients: (I) who were diagnosed with rheumatic valvular heart disease, (II) with a history of infective endocarditis, (III) with organic lesion of mitral leaflet and chordae tendineae according to previous echocardiography or other tests, or (IV) who were under the age of 18 years. All patients underwent AVR, with (treatment group) or without (control group) concomitant mitral valve surgery (repair or replacement). Since there’s no standard guideline recommendation for the treatment of moderate FMR during AVR, the decision on whether to operate on mitral valve in this group of patients was made according to comprehensive evaluation of the patient characteristics. For those with larger left ventricle or mitral annulus, eccentric mitral regurgitation and/or longstanding course of aortic valve disease, surgeons might tend to choose AVR + mitral valve intervention over isolated AVR. A right atrial incision followed by trans-septal approach was performed in patients who received concomitant mitral valve intervention.

The primary endpoint was the occurrence of major adverse cardiovascular and cerebrovascular events (MACCE, defined as the composite of all-cause death, non-fetal myocardial infarction, ischemic or hemorrhagic stroke, hospitalization for heart failure and repeat valvular surgery). The secondary endpoints were postoperative complications and the changes in echocardiographic characteristics, including the left ventricular EF, left ventricular end-diastolic diameter (LVEDD), left atrial diameter (LAD), as well as the level of mitral regurgitation.

Moderate FMR was determined using transthoracic echocardiography by examining the vena contracta and regurgitant jet area for at least two times by different sonographers before the surgery, and patients who were considered to have less or more than moderate level of mitral regurgitation were excluded. All patients received transesophageal echocardiography in the operating room prior to the surgical procedure to confirm the level of FMR again. Perioperative death was defined as death within 30 days postoperatively. Improvement of moderate FMR was defined as the decrease of regurgitation for at least one level based on transthoracic echocardiography, whereas complete improvement of FMR was defined as the disappearance of the mitral regurgitation.

Baseline and early postoperative characteristics of the patients were obtained from inpatient electronic records, while follow-up echocardiographic results were collected from outpatient visits. Phone call interview was used for patients who were unavailable for outpatient follow-up.

The normality of continuous variables was determined using Shapiro-Wilk test. Continuous variables were presented as mean ± standard deviation if they were normally distributed, and tested by student’s t test. Otherwise, they were presented using medians with the 25th and 75th percentiles and tested by Kruskal-Wallis H test. Categorical variables were presented as no (%) and tested by Chi-square test with or without Yates' continuity correction, or by Fisher exact test, as appropriate. The overall and MACCE-free survival rate was calculated using the Kaplan-Meier method and compared by the log-rank test, followed by multiple adjustment with inverse probability treatment weighting (IPTW) analysis. A standardized mean difference (SMD) <0.2 or P value >0.05 was considered to indicate adequate balance for between-group differences. In the follow-up echocardiography analysis, only patients who provided echocardiographic results were included. A P value <0.05 was considered statistically significant, and Bonferroni correction was applied, as appropriate. Statistical analyses were performed using R 4.0.2 (R Core Team, Vienna, Austria).

Of all the patients enrolled, 36 (46.2%) received isolated AVR, while 42 (53.8%) received AVR with mitral valve repair (24.4%) or replacement (29.5%). Age, contribution of sex and preoperative comorbidities were comparable between the two groups, and as was the same regarding preoperative echocardiographic parameters including the EF, LVEDD and LAD. However, patients in the treatment group had higher rates of receiving mechanical aortic valve (55.6% vs. 88.1%, P=0.001). In addition, since there’s the opportunity for further evaluation of tricuspid valve through direction observation, more patients in this group were likely to receive tricuspid valve repair than those who underwent isolated AVR (2.8% vs. 33.3%, P=0.001), although the severity of tricuspid regurgitation was comparable between the two groups (P=0.912). Baseline patient characteristics were summarized in Table 1. To increase the comparability of the two groups, IPTW analysis was performed. Variables listed in the Table 2 were included in the IPTW analysis, and the baseline and intraoperative characteristics were considered to be well balanced.

Baseline and intraoperative characteristics in the unmatched analysis

Baseline and intraoperative characteristics in the IPTW analysis

Postoperative and follow-up outcomes in the unmatched and IPTW analysis 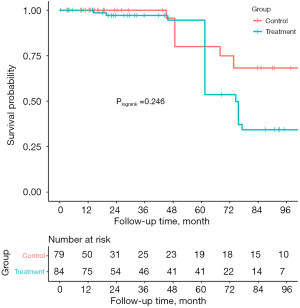 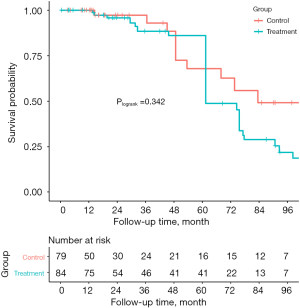 Follow-up echocardiographic outcomes in the unmatched and IPTW analysis

In this study, we observed that in HFmrEF patients with aortic valve disease complicated with moderate FMR, there was no difference in both the overall and MACCE-free survival between isolated AVR and AVR + mitral valve surgery, and the improvement of EF was also similar between the two groups, even after multiple adjustment for the potential confounders using IPTW analysis. However, we also noticed that while concomitant mitral valve surgery improved mitral regurgitation more completely, it increased the duration of cardiopulmonary bypass and cross-clamp time. Furthermore, mitral valve surgery also increased the risk of postoperative acute kidney injury, which was more significant after multiple adjustment with IPTW analysis.

The heart valve surgery is often the only way to improve the long-term survival of a patients with severe valvular heart disease. However, it is associated with the risk of serious postoperative complications, including death or postoperative acute kidney injury requiring renal replacement therapy (15,16). Therefore, it is of critical importance to evaluate the effect of heart valve surgeries.

HFmrEF is a relatively new concept which has been taking the interest of physicians and researchers in recent years. According to prior studies, HFmrEF significantly affects the patient outcome, and the mortality as well as the rate of adverse events are intermediate between heart failure with preserved and reduced EF (20-23). Furthermore, other studies report that HFmrEF is composed of three subsets, including deteriorated, stable and improved (according to the prior EF level), and the prognosis of these three groups of patients were differed (9,24), indicating that the improvement of EF is crucial to the improvement of patient outcome. There is also evidence on the impact of HFmrEF in patients receiving coronary artery bypass grafting, suggesting that HFmrEF negatively impacts patient outcomes including survival, myocardial infarction and hospitalization for heart failure (12). However, the impact of HFmrEF on patients undergoing heart valve surgery, especially on patients with aortic valve disease complicated with moderate FMR, is unknown. Here, we evaluated the change of EF after surgery in these patients enrolled in this study. We noticed that there was no difference regarding the component of deteriorated, improved or unchanged EF between the isolated AVR and AVR + mitral valve surgery groups. And the same was observed in LVEDD and LAD. It is worth mentioning that mitral valve surgery improved mitral regurgitation more completely than the control group, even though this did not benefit in the improvement of survival outcome. Hence, although concomitant mitral valve surgery might have priority on improving mitral regurgitation more thoroughly, it might not bring extra benefit in the improvement of HFmrEF than isolated AVR. More studies are needed.

This study has several unneglectable limitations. First of all, this was a retrospective cohort study from a single center. Thus, the bias caused by the study design was unavoidable. Secondly, this study was also limited with smaller sample size and relatively shorter follow-up duration, which might have compromised the power of tests. In addition, although IPTW analysis has priority on improving the between-group imbalances, potential unmeasured confounders might still exist, and it might result in over-fitting of the available data, especially in situations with small sample sizes. Furthermore, we failed to collect echocardiography for all of the patients who have survived during the follow-up. As a consequence, the echocardiographic results might be not enough to fully represent all of the population, to some extent. Last but by no means the least, EF of the patients at least three months prior to this study was not available, thus failing to further analyze the subset of HFmrEF on the patient outcome. Prospective studies with larger sample sizes are needed.

In patients with aortic valve disease followed by moderate FMR and HFmrEF, mitral valve surgery concomitant to AVR may not bring extra benefit in the MACCE-free survival and the improvement of HFmrEF. However, while concomitant mitral valve surgery might have priority on the complete improvement of mitral regurgitation, it might also increase the risk of postoperative acute kidney injury.

The authors thank Runzhen Chen, MD, from the Fuwai Hospital, Chinese Academy of Medical Sciences, and Peking Union Medical College for assistance with the statistical analysis.

Reporting Checklist: The authors have completed the STROBE reporting checklist. Available at https://jtd.amegroups.com/article/view/10.21037/jtd-22-278/rc

Conflicts of Interest: All authors have completed the ICMJE uniform disclosure form (available at https://jtd.amegroups.com/article/view/10.21037/jtd-22-278/coif). The authors have no conflicts of interest to declare.

Ethical Statement: The authors are accountable for all aspects of the work in ensuring that questions related to the accuracy or integrity of any part of the work are appropriately investigated and resolved. The study was conducted in accordance with the Declaration of Helsinki (as revised in 2013). The study was approved by the Institutional Review Board at Fuwai Hospital (No.: 2021-1585) and individual consent for this retrospective analysis was waived.