Laubry-Pezzi syndrome is defined as the association of ventricular septal defect (VSD) and aortic regurgitation (AR) due to a prolapsing right coronary or less frequently non-coronary cusp (1). The pathophysiology is explained by Venturi’s effect: when blood passes through the VSD located underneath the aortic valve, the fall of pressure aspirates the right coronary or non-coronary cusp resulting in AR (2).

Laubry-Pezzi syndrome is a rare congenital heart disease (CHD) and therefore there is still no agreement about its surgical management. Moreover there are a limited number of reports in the literature describing the long-term complications after surgical correction of this syndrome (3,4).

Here we report the late occurrence of an aortic root pseudoaneurysm and a residual VSD in a patient with Laubry-Pezzi syndrome operated on during childhood.

A 45-year-old man was referred to our department of Cardiac Surgery for New York Heart Association functional class II/III symptoms and chest pain. His surgical history started in 1965 at the age of 5 years when he was operated for a Laubry-Pezzi syndrome. He underwent isolated VSD closure with a pericardial patch. One month later, according to a residual severe AR, he needed an aortic valve replacement with a tilting disc mechanical prosthesis (Bjork-Shiley N. 19). A regular cardiologic follow-up was then instituted and found a progressive but slow evolution of the ascending aorta (42 mm at the sinuses of Valsalva, 47 mm at the ascending aorta). Compared to previous controls, the most recent transthoracic echocardiography revealed an increasing diameter of the Valsalva sinuses and ascending aorta (maximal diameter of 56 mm). It showed also a preserved left ventricular function but a residual VSD with right ventricular dilatation and a moderate patient-prosthesis mismatch with a mean transprosthetic gradient of 32 mmHg. Computed tomography scan revealed instead a large aortic root pseudoaneurysm (maximal diameter of 88 mm; Figure 1). Left coronary angiogram was normal, as right coronary artery could not be catheterized. According to the enlarging aortic root pseudoaneurysm associated to a moderate prosthetic mismatch and a residual VSD in this symptomatic patient, a redo surgical procedure was decided. 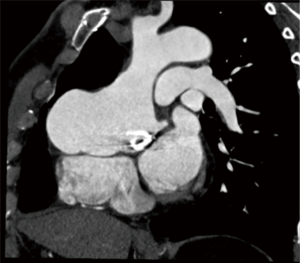 The operation was performed through an iterative (3rd) median sternotomy under moderate hypothermia (34 °C). The cardiopulmonary bypass was instituted between the femoral artery, the femoral vein and the superior vena cava. After aortic cross-clamping, myocardial protection was achieved using cold crystalloid cardioplegia. Intraoperative inspection confirmed the presence of the pseudoaneurysm originating from the previous aortic suture line (Figures 2,3) with elevation of the coronary ostia. After removing the normally functioning Bjork-Shiley prosthesis, the residual VSD was located under the aortic annulus corresponding to the previous right coronary cusp. It was closed with an autologous pericardial patch sutured far away from His bundle to avoid atrioventricular block. A Bentall-De Bono operation was then performed using a mechanical valved conduit (ATS Medical, Minneapolis, MN). The simple resection of peri-annular tissue allowed the implantation of a 23 mechanical prosthesis without an aortic annulus enlargement. The patient was easily weaned from cardiopulmonary bypass in sinus rhythm. The postoperative course was uneventful and the patient was discharged from the hospital at postoperative day 8. Transthoracic echocardiography performed before the discharge showed a preserved left ventricular function, a mean transprosthetic gradient of 21 mmHg and the absence of a residual VSD. 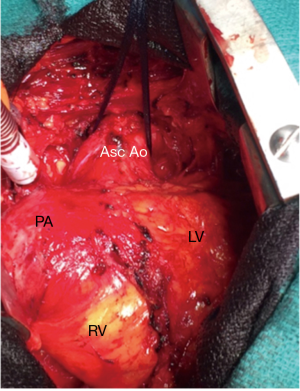 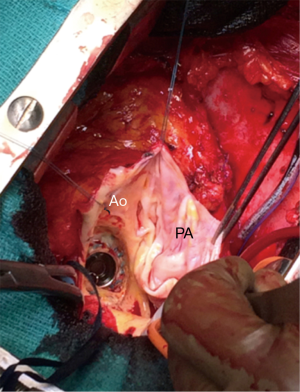 Figure 3 Operative view showing the cleavage between the aortic root and the pseudoaneurysm just above the suture. Ao, aorta; PA, pseudoaneurysm.

Herewith, we present a case highlighting the occurrence of long-term complications after surgical correction of Laubry-Pezzi syndrome. In this CHD surgical indication, appropriate timing of surgery and operative technique are still matter of debate owing to its rare incidence among overall population. Moreover there are very few reports dealing with long-term outcome, complications and reoperation rate. In the present case, we report two different long-term complications: a residual VSD and an aortic root pseudoaneurysm. The first is a classical complication (not requiring systematically a reoperation) after surgical closure of a VSD while the second could be encountered in patients with a history of aortic surgery (needing in most of the cases a redo surgery) (5). Indeed a leading anatomic component of Laubry-Pezzi syndrome is the lack of continuity between the aortic media and annulus in the region of the right coronary sinus with a tendency towards aneurysm formation (6). In the present case, this could explain the slow progressive dilatation of the sinuses of Valsalva and the ascending aorta. Moreover the histopathologic analysis showed a degeneration of elastic and muscular fibers of the resected aortic wall. These pathologic features of the aortic media coupled both with a poor healing process at the level of a previous surgical line suture and a growing patient could probably explain the formation of the pseudoaneurysm. Finally we would like to underline the exceptional durability of the Bjork-Shiley prosthesis (45 years after implantation).

The description and knowledge of such complications in patients with Laubry-Pezzi syndrome operated during childhood or adolescence is of outmost importance for several reasons. Firstly, in western countries over 85% of children with CHD survive into their adult years (7). Moreover the prevalence of adults with CHD is steadily increasing over time in developed countries and, interestingly, now outnumbers the prevalence of children with CHD (8).

So the community of cardiac surgeons will be faced to a growing number of patients with adult CHD and should be aware of the potential complications in such a population. Furthermore the description of long-term complications in a subset of rare CHD like Laubry-Pezzi syndrome is of special interest as their surgical management could be particularly challenging.