Atrioventricular septal defect (AVSD) is related to severe pulmonary hypertension and heart failure in early childhood. In 1966, Rastelli classified three types of AVSD based on anatomical structure: complete (CAVSD), transitional (TAVSD), and partial (PAVSD) (1). Developed surgical techniques and peri-operative management have reduced AVSD-related mortality in children to about 10% over the past few decades (2,3).

However, despite improved survival, left atrioventricular valve (LAVV) regurgitation may develop as a major event after surgery in 8% to 10% of patients, sometimes requiring re-operation (4,5). The surgical repair for AVSD still remains a great challenge in patients younger than three months, less than four kilograms, or with other genetic disorders (e.g., Down syndrome). This study aimed to evaluate the middle to long-term surgical outcomes in patients with three types of AVSD and identify the risk factors associated with mortality and LAVV re-operation. We present the following article in accordance with the STROBE reporting checklist (available at https://jtd.amegroups.com/article/view/10.21037/jtd-22-790/rc).

From January 2013 to December 2021, patients who underwent AVSD repair were recruited from the database of the Cardiovascular Center of the Children’s Hospital of Fudan University. Patients who had transposition of the great arteries, double outlet right ventricle, tetralogy of Fallot, or a single ventricle were excluded from the analysis. In total, 150 patients were included and divided into three groups according the Rastelli classification: Complete defect group (C-group), Transitional defect group (T-group), and Partial defect group (P-group). Age (≤3.0 months) and weight (≤4.0 kg) were defined according to the findings reported by other studies (2). Early mortality was defined as death within 30 days after corrective surgery. Echocardiography was regularly used to assess the severity of LAVV regurgitation (mild, moderate, severe) using the color Doppler jet area before and after surgery. The pulmonary arterial pressure was evaluated based on tricuspid regurgitation pressure gradient using echo and further classified as none (PH <30 mmHg), mild (30≤ PH <50 mmHg), moderate (50≤ PH <70 mmHg), and severe (≥70 mmHg) (6). The study was conducted in accordance with the Declaration of Helsinki (as revised in 2013). This retrospective study was approved by the Ethics Review Board of the Children’s Hospital of Fudan University [No. (2022)132]. The need for patient consent was waived because of the retrospective nature of the study.

The primary outcomes were set as time of death, freedom from overall re-operation, and LAVV re-operation. For patients who did not experience these outcomes, times were censored at the last follow-up date (December 31, 2021).

Demographic and surgical data were obtained from the Center. Follow-up data were collected from clinical examinations and echocardiography during outpatient clinics. The mean follow-up period of the entire cohort was 33.37±27.13 months (range, 1–100 months). 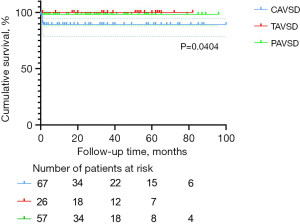 The mortality was 5.33% (8/150) in the entire cohort, including seven early deaths (6 in the C-group) and one late death. The 7 (87.5%) deaths included four patients younger than three months in the C-group and 1 (12.5%) in the P-group (Table 2, P=0.034). The two major causes of mortality were cardiopulmonary failure (n=5) and heart failure (n=3). In these patients, 5 (62.5%) were diagnosed with severe pulmonary hypertension, and 7 (87.5%) with ≥ moderate LAVV regurgitation prior to surgery. One patient was treated with mechanical ventilation and one with continuous positive airway pressure (CPAP) therapy due to shortness of breath and poor response during preoperative preparation. Five patients showed recurrent pulmonary infection before surgery, and four showed significant developmental delay. The majority of LAVV in these patients were difficult to repair, causing unsatisfied valve function after surgery. Two patients were diagnosed with severe regurgitation within the first 24 hours after surgery, five with moderate, and only one with mild. Three patients underwent re-operation, including one with moderate LAVV regurgitation and difficulty weaning off the ventilator, one with postoperative mediastinal infection, and one with left ventricular outflow tract stenosis. The details of in-hospital mortality are listed in Table 3. 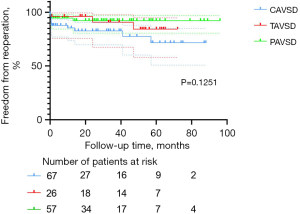 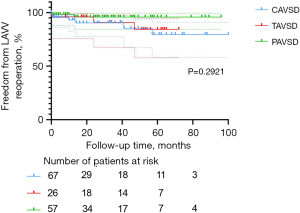 Impact of pulmonary hypertension analyzed at 3 months of age intervals

Our mid to long-term results demonstrated a low mortality (5.44%) and an acceptable overall re-operation rate (12.7%) after AVSD repair, which are consistent with the 2.95–15% mortality (7) and 3.6–22% re-operation rate (8) reported by Hoohenkerk et al. and Ginde et al. Patients in the CAVSD group had a higher mortality of 10.4% (7/67), including six early deaths. It is interesting to note that no significant difference was found in freedom from LAVV re-operation among three AVSD types. We further evaluated the effect of age (≤3 months), severe pulmonary hypertension before surgery, severe LAVV regurgitation within 24 hours after the first surgery, AVSD type on mortality, and ≥ moderate LAVV regurgitation within 24 hours after the first surgery, AVSD types and surgical era [2017–2021] on LAVV re-operation rate. The impact of pulmonary hypertension was also analyzed in patients at 3 months of age intervals.

No consensus has been reached about whether AVSD repair can increase mortality in patients ≤3 months of age. It is recommended to perform surgery in children who have symptoms of congestive heart failure at an age of 3–6 months (9). This recommendation is supported by Delmo Walter et al., who pointed out that surgery in younger patients can increase mortality, as their LAVV is relatively fragile and easy to tear, and the surgical exposure during surgery is limited (10). In our cohort, eight patients died after surgery, including four who were ≤3 months of age. The univariable analysis depicted a higher mortality in patients aged ≤3 months (Table 4, P=0.009), but this change was not statistically significant in the multivariable analysis (Table 4, P=0.222). This result was inconsistent with that reported by Ramgren et al. (11), which might be due to the fact that the surgeries in the younger patients were quite difficult, but getting part of these sick patients improved and survived. Fong et al. found decreased postoperative mortality over time and a better late survival in patients ≤3 months of age (12). Even for the complex CAVSD repair, complete repair performed on patients ≤3 months of age and weighing ≤3.5 kg was successful, with a 20-year survival rate of 92.0% and 83.8%, respectively, as reported by Buratto et al. and Goutallier et al. (3,13). On the basis of valvular morphology, individualized surgical strategies can be designed to improve the outcomes of AVSD patients. 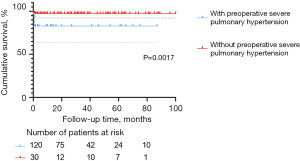 Figure 4 The effect of independent risk factor on survival. Kaplan-Meier survival for patients with (blue) and without preoperative severe pulmonary hypertension (red). Confidence intervals were showed in dotted line.

According to the multivariable Cox regression analysis and Kaplan-Meier survival plot, severe LAVV regurgitation within 24 hours after the first surgery remains a major life-threatening event (Table 4, P=0.023; Figure 5, P=0.0013). Postoperative severe LAVV regurgitation may aggravate pulmonary hypertension, thus leading to cardiac insufficiency, and even early death. Therefore, great caution should be taken in placing traction sutures to achieve good exposure of the surgical field, as well as pulling the valve to avoid severe LAVV regurgitation due to valve rupture. In addition, the operator should repair the valve as delicately as possible to reduce the degree of regurgitation to below moderate levels. Close monitoring of LAVV regurgitation is also required after surgery. As shown in Table 2 and Figure 1, the in-hospital mortality in the C-group was significantly higher than in the other groups, which corroborates the findings by Schleiger et al. (2). This difference in mortality could be attributed to the following reasons. First, surgical repair of CAVSD was more technically challenging than TAVSD and PAVSD, resulting in longer CPB time (P=0.011), cross-clamp time (P<0.001), postoperative mechanical ventilation time (P<0.001), LOS in ICU (P<0.001), and postoperative LOS in the hospital (P<0.001). Moreover, complications in seven CAVSD patients who died were much more complex and intractable, characterized by respiratory distress (5/7), pulmonary hypertensive crisis (2/7), arrhythmia (2/7), infections (2/7), delayed chest closure (1/7), and acute renal failure requiring peritoneal dialysis/hemodialysis (1/7). These findings are in line with those reported by Jacobs, who analyzed 2,882 AVSD operations in the STS Congenital Heart Surgery Database (14). Therefore, early postoperative care should be focused on multiple organ dysfunction and CAVSD complications.

The LAVV re-operation rate increases as LAVV function decreases. The main factor affecting LAVV re-operation is LAVV regurgitation. At the final follow-up, the percentage of patients with severe LAVV regurgitation was higher in the C-group (n=16, 23.9%) than in the T-group (n=4, 15.4%) and P-group (n=7, 12.3%). The re-operation rate of LAVV was 8.0% (12/150) in the entire cohort, with seven patients in the C-group, three in the T-group, and two in the P-group. This result is in accordance with finding by Mery et al. and Airaksinen et al. (4,5). According to the multivariable Cox regression analysis, ≥ moderate LAVV regurgitation within 24 hours after surgery (P=0.014) was an independent risk factor for LAVV re-operation, which is consistent with the conclusion drawn by Fong et al. (12). The finding was also displayed in the Kaplan-Meier survival plot (Figure 6, P=0.0016). Interestingly, there was no significant difference in freedom from LAVV re-operation among the three groups (P=0.2921, Figure 3), suggesting approximate LAVV re-operation rates of different AVSD types. As suggested by Sarısoy et al., this phenomenon may have arisen from the low incidence of Down syndrome in the T-group and P-group (15-17). In patients without Down syndrome, the morphology of the LAVV is more dysplastic and no redundant valve tissues can be used for LAVV reconstruction (15,16), which may lead to residual regurgitation. During our follow-up period, five patients with TAVSD or PAVSD who underwent LAVV re-operation did not have Down syndrome. Our conclusion was also supported by previous findings of Lange et al. (15), who reported a higher rate of freedom from LAVV re-operation in the group with Down syndrome (82%±2.9%) than in the group without Down syndrome (72%±5.3%) during 20 years of follow-up (P=0.004). 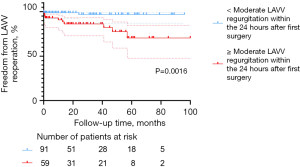 Figure 6 The effect of independent risk factor on freedom from LAVV reoperation. Kaplan-Meier freedom from reoperation for patients with < moderate (blue) and ≥ moderate LAVV regurgitation within the 24 hours after first surgery (red). Confidence intervals were showed in dotted line. LAVV, left atrioventricular valve.

Surgical era [2017–2021] was not an independent risk factor for LAVV re-operation in the univariable Cox regression analysis (P=0.111, Table 5). In recent years, annuloplasty has been conventionally adopted in our center. In the present study, 15 of 16 patients receiving annuloplasty did not have to undergo LAVV re-operation during the follow-up. In these 16 patients, nine had severe LAVV regurgitation before surgery. At the last follow-up after annuloplasty, 11 patients had mild or moderate LAVV regurgitation, which demonstrates the good outcomes of this technique. According to Komoda et al. and Fundarò et al., the application of annuloplasty, especially Wooler annuloplasty, can substantially reduce the risk of LAVV regurgitation, which was confirmed by our statistics (18,19).

Impact of pulmonary hypertension on children of different intervals of age

The most important limitation of this study lies in that it was a retrospective study carried out in a single center with a limited number of patients. The number of patients ≤3 months of age and weighing ≤4 kg was relatively small, which challenges risk factor analysis, and the results from the analysis might have deviations.

We would like to thank Medjaden Inc for the help in polishing our paper.

Reporting Checklist: The authors have completed the STROBE reporting checklist. Available at https://jtd.amegroups.com/article/view/10.21037/jtd-22-790/rc

Conflicts of Interest: All authors have completed the ICMJE uniform disclosure form (available at https://jtd.amegroups.com/article/view/10.21037/jtd-22-790/coif). The authors have no conflicts of interest to declare.

Ethical Statement: The authors are accountable for all aspects of the work in ensuring that questions related to the accuracy or integrity of any part of the work are appropriately investigated and resolved. The study was conducted in accordance with the Declaration of Helsinki (as revised in 2013). The study was approved by the Ethics Review Board of the Children’s Hospital of Fudan University [No. (2022)132]. The need for patient consent was waived because of the retrospective nature of the study.