Microcirculation refers to the blood circulation between arterioles and venules and is the prime site for the exchange of oxygen, nutrients, and metabolites and the most important regulator of oxygen delivery in tissue. Serious medical conditions such as sepsis, high-risk surgery, cardiac arrest, and respiratory failure can lead to microcirculatory dysfunction. Persistent microcirculatory dysfunction is the main mechanism of tissue oxygenation failure and early organ dysfunction, which have a significant impact on the prognosis of patients. Studies have reported that extensive microcirculatory changes occur after cardiac surgery (1-4). The changes in microcirculation after cardiac surgery are related to potential heart disease or cardiogenic shock, anesthesia, and surgical procedures, and the impact of cardiopulmonary bypass (CPB) on microcirculation should not be overlooked. During CPB, the systemic blood circulation is converted to extracorporeal circulation by a heart-lung machine, and blood cells and plasma proteins are activated due to exposure to polymers that are not biocompatible, thereby triggering inflammation and micro thrombosis. Hemodilution, hypothermia, cardiac arrest, and the conversion of pulsatile and nonpulsatile blood flow during CPB increase the adverse effects on microcirculation. Studies have shown that acute changes in microcirculatory blood flow occur after CPB-assisted cardiac surgery, including increased microcirculatory heterogeneity, decreased functional capillary density, and increased venular blood flow velocity (5-8). Microcirculatory changes can lead to organ dysfunction, prolonged hospitalization, and other adverse consequences (9-12), but microcirculation monitoring has not been widely used due to research in this filed are still limited and which parameter is most sensitive remains to be determined. Moreover, little is known about the pattern of these changes and recovery after CPB-assisted cardiac surgery (13,14).

In this single-centered prospective cohort study, patients who received CPB-assisted cardiac surgery and were admitted to the intensive care unit (ICU) after surgery at the Guangdong Provincial People’s Hospital, Department of Cardiac Surgery between December 1 2018 and January 31 2019 were recruited, to compare measurements of microcirculation at 4-time intervals within 24 hours postoperatively, and analyze correlation between microcirculatory parameters and macroscopic hemodynamic indicators at each time-point. This study was conducted in accordance with the Declaration of Helsinki (as revised in 2013) and was approved by the ethics committee of Guangdong Provincial People’s Hospital (No. 2018-584H-1). The ethics committee of Guangdong Provincial People’s Hospital waived the need for patient’s written informed consent.

The inclusion criteria were patients ≥18 years of age with indwelling pulmonary artery catheter and with sedative and analgesic ventilator-assisted ventilation or spontaneous breathing but conscious and able to cooperate. The exclusion criteria were: patients with emergency surgery; pregnant women; patients with heart transplantation, intra-aortic balloon pump (IABP) or extracorporeal membrane oxygenation (ECMO); patients with oral disease, difficulty opening their mouth, or with massive oral bleeding that would affect the quality of image acquisition; patients with noninvasive ventilation; and those participating in other studies during the same period or unwilling to participate in this study. The elimination criteria were those who survived less than 24 hours after inclusion or withdrew halfway and those with poor image quality.

The video images of sublingual microcirculation were collected using a MicroSeeV100 handheld video microscope (Guangzhou Yiruan Intelligent Technology Co., Ltd., Guangzhou, China; software version 2.84) at 0, 6, 16, and 24 hours of ICU admission. A trained operator gently wiped off oral secretions, especially those under the tongue, with a 37 ℃ normal saline cotton swab. The tracheal intubation tube was moved to 1 side 2 minutes later. A microscopic video probe was used during image acquisition to avoid the influence of pressure on microcirculation, and the focal length was adjusted to obtain stable and clear video images. A total of 5 video images lasting 30 seconds were captured at 2 locations on each side of the lingual frenulum and at another optional location. All images were confirmed independently by two professional physicians. Five microcirculatory parameters, including total vascular density (TVD), perfused small vessel density (PSVD), proportion of perfused small vessels (PPV), microvascular flow index (MFI), and flow heterogeneity index (HI) could be obtained through the collected images.

The MFI was calculated as follows. The obtained visual field was equally divided into 4 quadrants, and scores were based on the flow of small vessels in each quadrant: no blood flow (0 point), intermittent blood flow (1 point), slow blood flow (2 points), and normal flow (3 points). The average of the 4 scores represented the MFI and reflected microcirculatory blood flow. The difference between the maximum and minimum of the 4 scores divided by MFI was the HI, which was used to evaluate differences in the adjacent blood flow of microcirculation, reflecting the simultaneous occurrence of flowing capillaries and stasis or clotting capillaries after microcirculatory dysfunction.

Clinical indicators at each time interval

Microcirculatory parameters at each time interval

There were statistical differences in the changes of TVD (P=0.012) and PSVD (P=0.005) during the 24-hour postoperative window following CPB-assisted cardiac surgery. There was no significant difference in PPV, MFI, and HI (Table 3, Figure 1). 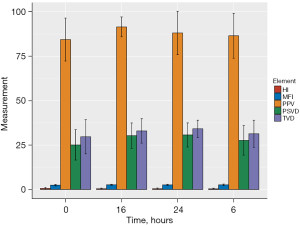 Interestingly, no significant change in MFI after CPB was observed in this study. There are conflicting reports concerning the influence of CPB on MFI. Some studies have reported that MFI increased compared with the baseline after the start of CPB during surgery (18,21), while some did not observe this effect during cardiac surgery (20,22,23), and others reported that MFI significantly decreased compared with the baseline during ICU follow-up (24,25). It is speculated that the current measurement method of MFI only reflects the abnormal flow of slow microcirculation and does not consider the abnormal flow of hyperdynamic microcirculation. However, hyperdynamic circulation after CPB is common in clinical practice, making it difficult to identify the effect of CPB on MFI. The measurement method of HI is similar to that of MFI, so the limitation is also similar. In addition, HI is used to evaluate differences in the adjacent blood flow of microcirculation, which is common in patients with sepsis. Therefore, HI is mostly used for microcirculatory studies in sepsis (26-28) but rarely for microcirculatory studies after cardiac surgery (20).

Pv-aCO2 is considered to be a good indicator for evaluating organic blood flow. According to the modified Fick’s formula, Pv-aCO2 = k × total carbon dioxide production (VCO2)/CO, Pv-aCO2 is inversely proportional to CO, which is supported by the results of clinical studies on patients with septic shock (43,44). However, some studies have reported no significant negative correlation between Pv-aCO2 and CO (45,46). In our study, Pv-aCO2 was not significantly negatively correlated with CI at 0 hour (r=−0.181, P=0.397) but showed a strong positive correlation with MFI (r=0.6496, P=0.0006). During the early postoperative period following cardiac surgery, microcirculatory perfusion is often restored. The hydrogen ions generated by anaerobic glycolysis and adenosine triphosphate (ATP) hydrolysis accumulated in the interstitial space will enter the bloodstream in large quantities with the increase of microcirculatory flow and is buffered by bicarbonate in the bloodstream, resulting in the output of a large amount of anaerobic carbon dioxide, thus significantly increasing VCO2 (47). It can be seen from the modified Fick’s formula that Pv-aCO2 is inversely proportional to CO and also proportional to VCO2. An increase in VCO2 will also cause PCO2gap, which can explain the strong positive correlation between Pv-aCO2 and MFI at the time of admission to the ICU (at 0 hour) postcardiac surgery. On the other hand, the replacement of carbon dioxide content by PCO2 is due to the near-linear correlation between the two under physiological conditions. In fact, the relationship between PCO2 and total blood carbon dioxide content is affected by many factors, including blood oxygen saturation, hematocrit, temperature, and the degree of metabolic acidosis (48). Patients after cardiac surgery are not under normal physiological conditions, so the relationship between PCO2 and total blood carbon dioxide content is not necessarily an ideal linear relationship. Ospina-Tascón et al. (47) suggested that VCO2 calculated according to Fick’s formula, VCO2 = CO × (CvCO2 − CaCO2), was effective under steady-state conditions, while the recovery of blood flow after organic ischemia would overstimulate VCO2, resulting in an increase in VCO2/VO2, which is consistent with the conclusion of our study. Herein, Pv-aCO2 was no longer correlated with MFI at 6 and 16 hours, suggesting that PCO2 could not completely replace carbon dioxide content under nonphysiological conditions to some extent.

There has been no research on the correlation between microcirculatory parameters and PCO2gap after cardiac surgery. A study on the correlation between PCO2gap and microcirculatory parameters in patients with sepsis (49) suggested that PCO2gap was the best predictor of uneven microvascular flow distribution and was significantly related to changes in PPV. In this study, we found that PPV moderately correlated with PCO2gap (r=0.4370, P=0.327) at 0 hour. This may be because there were so many factors affecting PCO2gap after cardiac surgery that PCO2gap could not reflect the postoperative distribution of microvessels. It is also possible that this resulted from a limited sample size.

The value of HI, which is used to evaluate differences in the adjacent blood flow of microcirculation, is calculated by MFI, so its correlation with carbon dioxide-related indicators is similar to that of MFI.

Reporting Checklist: The authors have completed the STROBE reporting checklist. Available at https://jtd.amegroups.com/article/view/10.21037/jtd-22-1159/rc

Conflicts of Interest: All authors have completed the ICMJE uniform disclosure form (available at https://jtd.amegroups.com/article/view/10.21037/jtd-22-1159/coif). The authors have no conflicts of interest to declare.