Crystalloids and colloids are given to maintain blood pressure and also to avoid blood product transfusions, in which even moderate bleeding is seen to be associated with an increased morbidity and mortality especially after cardiac surgery (1). Colloids have been used during cardiac surgery because of longer perseverance intravascularly compared to crystalloids (2,3). Especially hydroxyethylstarch (HES) had been used during cardiac surgery for decades, but in 2013, the European Medical Association (EMA) restricted its application which mandated changes in common used volume regimes (4). The restriction was based on higher mortality rates and acute kidney injury (AKI) in septic and critically ill patients receiving HES (5,6). But the use of last generation HES (6% 130/0.42 tetrastarch) has been discussed to be safe in comparison to other colloids or crystalloids especially for cardiac surgery (7). After the restriction for HES, the overall administration of colloids decreased of which gelatin (GELA) was increasingly used (8). But GELA is also critically discussed to be associated with need of higher noradrenalin dosages compared to tetrastarches (9), bleeding and the need for transfusion (3,10,11). The effectiveness and safety of GELA is currently being investigated in an ongoing multi-center study in critically ill patients (12).

In this retrospective study, we aimed to evaluate the effects of changed volume replacement management after the restriction of HES to GELA or to CRYS mono regimen. Because the EMA restricted HES due to death and kidney injury, we focused primarily on mortality and AKI and secondarily on blood loss, transfusions, hemodynamic support, and intensive care unit length of stay (ICU LOS). We present the following article in accordance with the STROBE reporting checklist (available at https://jtd.amegroups.com/article/view/10.21037/jtd-22-450/rc).

The study was conducted in accordance with the Declaration of Helsinki (as revised in 2013). The study was approved by the institutional ethics committee of the University of Ulm (approval ID 50-17) and individual consent for this retrospective analysis was waived. Relying entirely upon existing data, the committee waived the need for retroactive study-specific patient consent. All consecutive patients who were treated at least by coronary artery bypass grafting (CABG) between January 2012 and December 2014 were assessed for eligibility to cover similar pre- and post-restriction periods in clinical practice. Patients with insufficient data coverage or various colloid administration were excluded. Study data were extracted from routine patient records and anonymized.

The observation period ended on postoperative day (POD) 3, except mortality which was additionally calculated at the end of intensive care and at discharge from hospital, as well as the length of ICU stay. Primary outcomes were mortality and AKI [according to the Acute Kidney Injury Network (AKIN) criteria] (13). Secondary outcomes were blood loss, transfusions, hemodynamic support (vasopressor administration per time normalized to body weight), mechanical ventilation, and the ICU LOS.

The determinants were type and volume of the administered volume replacement solutions. Three subgroups were selected for the present analysis based on the exposure:

The standard of blood product administration was carried out according to the currently applicable cross-sectional guidelines of the German Medical Association for therapy with blood components and plasma derivatives with a focus on patient-specific threshold values based especially on a combined diagnosis of laboratory parameters, echocardiography and course of operation. The standard surgical procedure was also the administration of tranexamic acid in all operations with at least one coronary artery bypass.

Data were analyzed with the software R (R Foundation for Statistical Computing, Vienna, Austria) and add-on packages as specified below. Statistical tests and effects of factors were considered significant if P was less than 0.05.

Normalized data such as doses per body weight, cumulative data as the sum of administered substances or of excreted/drained volumes within the observation period, and other derived data were computed from the recorded data. Normality of continuous numeric data was assessed with the Shapiro-Wilk test and visualized by Q-Q plots. Non-normally distributed data are reported as median (first quartile to third quartile). Groups were compared with the Conover-Iman test using a Holm correction for post-hoc tests (conover.test package). Count data were evaluated with χ2 tests followed by pairwise two-proportion z-tests with Bonferroni correction for multiple testing. Ordinal data were assessed with cumulative link models and Tukey post-tests (ordinal and emmeans packages).

Time courses of continuous numeric data were fitted with linear mixed-effects models (nlme package) using time and group with an interaction term as fixed effects and patients as random intercepts. If there were significant effects of group or of the time: group interaction, data were further investigated for each level of time using the Conover-Iman test to identify pairwise differences between the groups. Colloid volumes were compared with the Wilcoxon rank sum test at each level of time as the CRYS patients did not receive colloids per definition. Longitudinal data of vasopressor and volume administration were characterized by increasing numbers of patients over time who did not receive further doses owing to improving hemodynamic stability or ICU discharge. Count data were derived from the dose data indicating the number of patients receiving a particular compound at each level of time. These data were evaluated as binary longitudinal data using generalized estimating equations (geepack package) to assess effects of group and time. Differences between groups at individual time points were identified by χ2 tests. The doses of patients still receiving them were then analyzed with mixed-effects models as described above.

A total of 1,540 patient datasets were included covering >98.8% of all CABG patients in the predefined time range (Table 1). Groups were comparable in all preoperative parameters except antiplatelet therapy (P=0.021).

Characteristics at baseline of patients who received CRYS, GELA, and HES as sole volume replacement

Mortality was without differences between groups (Table 2, Figure 1). We calculated a multiple logistic regression based on demographic and perioperative factors from sufficiently complete datasets of n=1,432 patients to assess the role of colloids in hospital survival. The minimal adequate model {χ2[14]=161.075, P<0.001, McFadden Pseudo-R2=0.620} is summarized in Tables S1,S2. Each liter of colloid solution decreased the adjusted odds of survival by a factor of 0.501 (95% CI : 0.354 to 0.710, P<0.001). The type of colloid was not part of the minimal adequate model, indicating similar effects of both tetraspan and gelafundin. Total infusion volume exerted a protective effect. Each liter of total volume increased the adjusted odds of survival by a factor of 1.216 (95% CI: 1.007 to 1.468, P=0.042). Cumulative blood losses at 18 h postoperative, intraoperative PRBC transfusions, cumulative norepinephrine administration on the operative day, and PCC administration were tested as potential confounders which are known to affect mortality, but may also have influenced colloid administration. The scaled and centered estimate of the effect of total colloid volume were altered by factors of 1.0, 0.92, 1.06, and 1.09, respectively, indicating that none of these factors acted as a confounder.

Peri- and postoperative data of patients who received CRYS, GELA, and HES as sole volume replacement 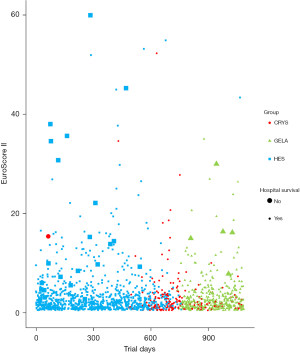 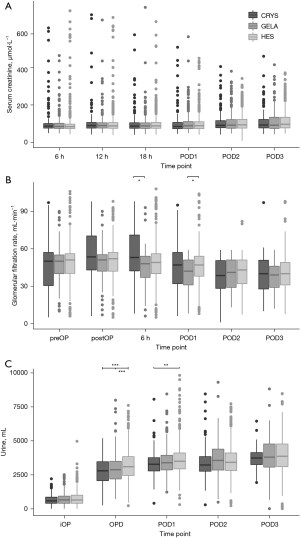 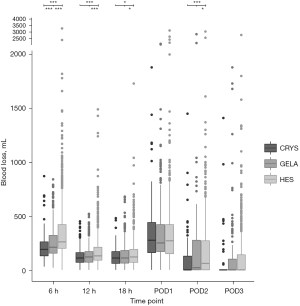 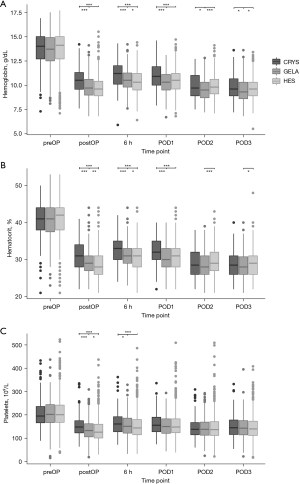 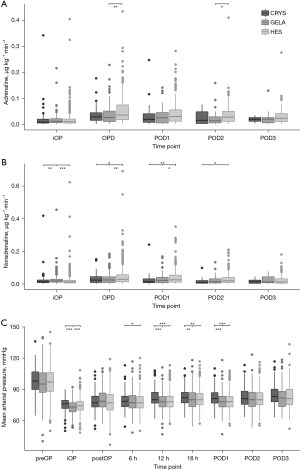 This retrospective study focused on the effects of volume management changes on GELA or CRYS in cardiac surgery at a university hospital. Main results are: (I) no difference in mortality was observed; (II) no differences were detected for AKI and RRT; (III) HES treated patients showed the highest blood loss, CRYS patients the lowest; (IV) HES had the highest transfusion of PRBCs and PCs and CRYS the lowest; (V) FFP, fibrinogen, and PCC were highest in HES; (VI) both colloids showed higher cumulative noradrenaline doses compared to CRYS; (VII) adrenaline was administered more often in colloid groups; (VIII) CRYS patients showed the shortest time of mechanical ventilation and ICU LOS, while HES patients had the longest ventilation and ICU LOS.

Due to the small number of deaths in our study and in the literature, no firm conclusion can be drawn for cardiac surgery. Large randomized studies in critically ill patients showed increased risk of AKI and need of RRT for the HES (5,6). GELA was rarely used, but some data describe no effects (14), other deleterious effects on kidney function in cardiac surgery (15). However, our data are consistent to a meta-analysis in cardiac surgery which did not find evidence for increased AKI or RRT in tetrastarch (7).

Controversial data are available investigating blood loss in terms of different volumes in cardiac surgery: some data comparing tetrastarch and crystalloids did not observe any differences (16-20), while others reported higher blood loss for tetrastarch (21,22); data comparing tetrastarch and GELA also range from a higher blood loss observed initially in one study in the tetrastarch group (23) to no difference reported in most studies (20,24-26). Results of blood product administration are in line with other data: patients with crystalloids received fewer transfusions compared to tetrastarch (17,21), and GELA received less transfusion than tetrastarch treated (23,24,26).

Despite reports of allergic or anaphylactic reactions after GELA exposure (31), no such reaction was observed in this study, but must be kept in mind as a potential risk.

Keeping in mind that just few data in cardiac surgery are available, our results match existing data that neither differences in mechanical ventilation (18,20,21) nor in ICU LOS (17,18,21) were observed.

Limitations of our study are the retrospective design, the almost linear sequence of volume regimens, and the fact that the decision for a volume regimen was at the discretion of the physician which could thus be prone to confounders and/or misinterpretations.

Overall, this retrospective investigation of three volume replacement managements showed no difference in mortality or AKI. The administration of crystalloids without any colloid was associated with less blood loss, transfusion, and mechanical ventilation having similar effects on MAP and ICU LOS. The administration of colloids in cardiac surgery should be considered critically due to the lack of evidence for benefits but severe concerns. Because of the restriction of hydroxyethylstarch and the subsequent GELA use in many places in cardiac surgery, further studies should investigate the effects of GELA in comparison to crystalloids.

Reporting Checklist: The authors have completed the STROBE reporting checklist. Available at https://jtd.amegroups.com/article/view/10.21037/jtd-22-450/rc

Conflicts of Interest: All authors have completed the ICMJE uniform disclosure form (available at https://jtd.amegroups.com/article/view/10.21037/jtd-22-450/coif). The authors have no conflicts of interest to declare.

Ethical Statement: The authors are accountable for all aspects of the work in ensuring that questions related to the accuracy or integrity of any part of the work are appropriately investigated and resolved. The study was conducted in accordance with the Declaration of Helsinki (as revised in 2013). The study was approved by the institutional ethics committee of the University of Ulm (approval ID 50-17) and individual consent for this retrospective analysis was waived.