Myasthenia gravis (MG) is an autoimmune disease that is mediated by binding autoimmune antibodies to the nicotinic acetylcholine receptor (AChR-Ab) in skeletal muscle at the neuromuscular junction. A total of 90% patients with MG have thymic aberrant alterations (1) and about 15–20% among which are demonstrated with histological pattern of thymoma (2). The association between pathological changes of the thymus and clinical symptoms of MG demonstrates that thymus is an important focus for initiating or perpetuating the autoimmune response in MG (3,4). Thymectomy results in suppression of both cellular and humoral immunity, and reduction in AChR antibodies, which further leads to sustained improvement as well as remission of clinical symptoms for MG patients (as high as 80%) (5-7). Thus thymus is generally accepted as the initiation site of MG disease.

Germinal centers (GCs) of thymus primarily consist of B cells, follicular dendritic cells, macrophages and T cells, which support antibody affinity maturation and memory formation. As a specialized subset of CD4+ helper T cells, T follicular helper (TFH) cells are defined as CD4+CXCR5+ T cells. TFH cells could migrate into GCs and then provide help or survival signals to B cells in GCs to promote their differentiation into long-lived plasma or memory B cells. Moreover, TFH cells represent one of the largest and most important subgroup of effective T cells in lymphoid tissue (8-10). TFH cells guide effector and memory B cells to produce appropriate antibody that plays an important role in the clinical symptoms of MG patients (11,12). These cells are characterized by increased expression of numerous molecules including inducible co-stimulator (ICOS), program death 1 (PD-1) and CD40-ligand, the transcription factor B cell lymphoma 6 (Bcl-6) and regulatory cytokines which can promote the development of TFH cells and the interaction of T and B cells (13). Increased numbers of circulating TFH cells and aberrant activation of TFH cells are associated with the development of autoimmune diseases, such as systemic lupus erythematosus (SLE), rheumatoid arthritis (RA) and IgA nephropathy (14-17).

A total of 50 patients were enrolled who underwent thymectomy at the Department of Thoracic Surgery, Huashan Hospital of FDU between 2013 and 2014. Thirty thymoma patients with MG were recruited as MG group (MG) while another twenty thymoma patients without MG were recruited as non-MG group (NMG). We collected ten control thymic biopsies from cardiac surgery cases of the Department of Cardiovascular Surgery, Huashan Hospital of FDU as thymus healthy control group (CTL). The thymic tissue was obtained from the thymus around thymoma region of patients and the thymus of CTL. The Medical Research Ethics Committee of Huashan Hospital approved this study.

The diagnostic criteria for MG included (21): (I) weakness of skeletal muscles, including cranial muscles; (II) fluctuation of muscle strength; (III) a concentration of serum anti-AChR-Ab greater than 1 nmol/L or ≥10% decreased in compound muscle action potential amplitude in response to stimulation at 3–5 Hz and increased jitter on single-fiber electromyography; (IV) positive response to cholinesterase inhibitor; (V) postoperative histopathologic diagnosis of thymoma. The exclusion criteria included: (I) treatment with immunosuppressive drugs, such as corticosteroids or azathioprine; (II) treatment with plasma exchange or intravenous immunoglobulin; (III) pregnancy; (IV) other autoimmune diseases or inflammatory diseases; and (V) diagnosis with type C thymoma, thymus hyperplasia, cyst or necrosis; (VI) <18 or >65 years old, without limitation of gender. MG was identified according to the Myasthenia Gravis Foundation of America (MGFA) clinical classification (22).

Ten thymus tissues from each group were included for western blot analysis. Concentrations of protein lysates were determined by the BCA assay. A total of 10 μg protein were loaded on 12% Tris-glycine gel and transferred to nitrocellulose membranes. Blots were blocked in 5% milk in PBS with 0.1% Tween-20 for 2 h, and then incubated with diluted antibodies (anti-Bcl-6, anti-PD-1) at 4 °C overnight. Secondary antibody was added at 37 °C for 1 h.

The CRi-NuanceTM Multispectral Imaging System (Cambridge Research and Instrumentation Inc., Woburn, MA, USA) was used for the acquisition of mean fluorescence intensity (MFI). Image J and Image-Pro plus were used for the analysis of IHC and WB results. Differences among groups were analyzed by the non-parametric Kruskal-Wallis test. GraphPad Prism 6 (GraphPad Software, Inc., USA) as drawing tool was used to complete the figures. Statistical significance was established at P<0.05.

MG patients with thymoma had higher percentage of TFH cells

To investigate the potential role of TFH cells in the pathogenesis of MG, thymus tissues of individuals in MG group, NMG group and CTL group were involved. The clinical characteristics of all subjects involved in this study were shown in Table 1. 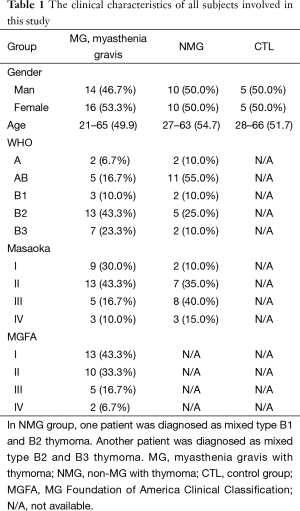 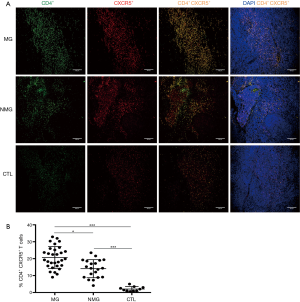 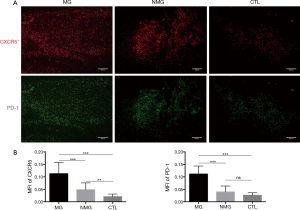 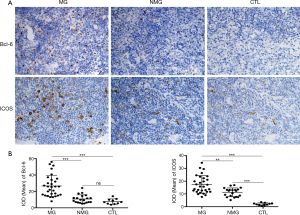 Figure 3 IHC staining for Bcl-6 and ICOS in the thymus of MG, myasthenia gravis, NMG patients and control group. (A) Positive staining of Bcl-6 in the cytoplasm of lymphocytes and ICOS in the membrane of lymphocytes. The expression of Bcl-6 and ICOS of MG group was higher compared with NMG group and control group; (B) mean IOD of Bcl-6 and ICOS, respectively. **P=0.0012, ***P<0.0001, ns, P=0.0803. Scale bars: 50 µm. IHC, immunohistochemistry; MG, myasthenia gravis; NMG, non-MG with thymoma; IOD, integrated optical density.

TFH cells often promote mutated B cells to fall into a wrong pathway and generate self-reactive B cells. Once this subset of T cells fails to discriminate self-reactive B cells from the normal antigen-specific B cells, high-affinity autoantibodies would be generated, and thereby autoimmune disease would happen (23). Increasing evidences have shown that TFH cells play an important role in the pathogenesis of autoimmune diseases, such as SLE, RA and IgA nephropathy (17,24,25). Furthermore, researchers revealed that the frequency and higher expression of TFH cells correlate with the disease severity which might involve in the pathogenesis of MG (19,20). Based on this, the present study targeted MG patients with thymoma and investigated the activity of TFH cells in thymic tissues around thymoma region. Our results showed that higher percentage of TFH cells in MG patients with thymoma compared with NMG patients and CTL group. It might indicate that dynamic TFH cells in thymic tissues around thymoma region might also participate in the pathogenesis process and reflect the severity of MG.

TFH cells are characterized by the expression of numerous molecules, including CXCR5, ICOS, PD-1 as well as Bcl-6. CXCR5 is the characteristic surface marker of TFH cells phenotype. The CD28 family members, ICOS and PD-1 are two distinguishing molecules closely related to the function of TFH cells. In addition, Bcl-6 is an essential transcriptional factor that is characteristically expressed in TFH cells. Our study found that CXCR5, ICOS, PD-1 and Bcl-6 were more highly expressed in MG patients with thymoma than those in NMG patients and CTL group. Furthermore, the levels of CXCR5 and ICOS were higher in NMG patients than those in CTL group. These results might indicate that their own immune activity of TFH cells in t MG patients with thymoma may be more dynamic in the pathogenesis of MG and we could speculate that thymic CD4+CXCR5+ICOShi T cells might play a major role in the process of MG. Notably, the PD-1 molecule was considered to provide an inhibitory signal to GCs TFH cells which prevents excessive proliferation of CD4+ T cell in GCs (26). Abrogation of PD-1 signaling enhanced TFH cells numbers and initial immunoglobulin responses, especially early in the GCs response (27). Recent studies had elucidated that the expression of PD-1 in patients with active SLE and RA was significantly lower than the healthy population (28,29). However, our study demonstrated that there was a higher expression of PD-1 in MG patients with thymoma compared with NMG and CTL group. This finding suggested that the role of PD-1 in MG with thymoma might be different from that in other autoimmune diseases.

The dynamic T cells in the peripheral blood of patients with SLE, RA provided more clues for the promoting role of TFH cells in autoimmune diseases (24,30). Moreover, the numbers of circulating total CXCR5+, CXCR5+ICOShi and CXCR5+PD1hi in CD4+T cells also increased in MG patients. There was a positive correlation between the frequency of CD4+CXCR5+ T cells and disease severity (19), and between the frequency of CD4+CXCR5+PD-1hi and the titer of autoantibodies (18). Although previous study had elucidated that GCs TFH cells are more efficient than circulating TFH cells in inducing B cells to produce antibody (9), a few studies offered supporting evidences for the role of thymic TFH cells in the process of MG in patients (20). In this study, we found the percentage and representative molecular expression of thymic TFH cells in MG patients with thymoma was significantly higher than those in NMG patients. These results were also demonstrated in the peripheral blood of MG patients (29). Thymic dynamic TFH cells collaborating with circulating TFH cells might be autoactive. This subset of CD4+ T cells may enhance their activity in the development of MG that promoted effector B cells to produce autoantibodies in humoral immunity.

In conclusion, our study showed that a higher percentage of TFH cells and expression of their associated molecules such as CXCR5, ICOS, PD-1 and Bcl-6 significantly increased in the thymus of MG patients with thymoma. We speculated that TFH cells in MG patients with thymoma might involve in the pathogenesis of MG. However, it remains to be shown whether the function of thymic autoactive B cells subsets in MG patients is enhanced due to the improved activity of thymic dynamic TFH cells subsets. The correlation between thymic TFH cells subsets and the disease severity of MG in patients still needs to be elucidated. Furthermore, the strategies to monitor TFH cells, as well as auto-reactive B cells, might be the new ways to treat autoimmune diseases. Inhibiting the immune function of TFH cells may effectively reduce the production of AChR-Ab and alleviate disease severity in MG patients.