Lung cancer is still a common malignant tumor worldwide, with high morbidity and mortality (1). Non-small cell lung cancer (NSCLC) accounts for 80–85% of lung cancer cases (2). According to histopathological classification, NSCLC can be further divided into lung adenocarcinoma, lung squamous cell carcinoma (LUSC), and large cell carcinoma (3). Currently, more than half of newly diagnosed cancer patients require radiation therapy, which can be combined with surgery, chemotherapy, or molecular targeted therapies (4). Radiation therapy has played a vital role in the treatment of patients with metastatic disease (5). It has been proven that the biological basis of radiation therapy is the effect of ionizing radiation on biological cells (6). Radiation-sensitive patients means that when radiation doses are limited to levels that maximize therapeutic effects, reduce normal tissue cell death, prevent excessive inflammation, and preserve stem cell populations, the irradiated normal tissues of patients can resist permanent damage and do not exhibit clinically relevant adverse effects (7). However, according to statistics, 60–70% of NSCLC patients have received radiotherapy, while the radiotherapy effect and prognosis of NSCLC are still poor due to the constraints of radiation resistance and other factors (8). It is worth noting that the exact mechanism of LUSC cell radioresistance has not been elucidated. Therefore, how to improve the radioresistance of LUSC cells has become a new approach and strategy for LUSC treatment.

Long non-coding RNAs (lncRNAs) are a class of linear RNA molecules that have no transcriptional function or protein coding potential, and are mainly produced by RNA polymerase II/I (9). LncRNAs have been confirmed to regulate gene expression through genomic imprinting, transcriptional regulation, and chromatin modification (10,11). Studies have also demonstrated that lncRNAs can be involved in cell proliferation, apoptosis, differentiation, chromatin remodeling, migration, and invasion, among other processes (12,13). At present, lncRNAs have been proven to be crucial in almost all diseases, such as tumors (12), nervous system disorders (14), and cardiovascular system diseases (15). Therefore, lncRNAs can be applied as potential diagnostic markers and new drug targets for diseases. Recent research revealed that lncRNA KCNQ1OT1 was closely associated with the processes of multiple diseases including cancers (16-18), ischemia reperfusion (19), and diabetic nephropathy (20), among others. Interestingly, It was discovered that lncRNA KCNQ1OT1 was upregulated in lung cancer compared with the normal tissues and the upregulation of lncRNA KCNQ1OT1 reduced the survival rate of NSCLC patients (18). Besides, lncRNA KCNQ1OT1 has also been revealed to regulate the cisplatin resistance of cancer (21). However, the role and mechanism of lncRNA KCNQ1OT1 in radiation therapy for LUSC remain unclear.

MicroRNAs (miRNAs) are a class of small non-coding RNAs that can mediate mRNA transcription and degradation through binding to the complementary 3'-untranslated region (3'-UTR) (22,23). Research has shown that miRNAs are involved in cell proliferation, cell cycle, apoptosis, oncogenesis, and differentiation (24,25). In cancer tissues, miRNAs play the roles of oncogenes or tumor suppressor genes (26). In the diagnosis and therapy of clinical tumors, miRNAs can be used as early diagnostic indicators, effective prognostic indicators, and new treatment targets for lung cancer (27,28). Recent research has demonstrated that lncRNAs can competitively bind miRNAs with the targeted regulatory genes to induce cancer cell progression (29). However, the potential miRNAs and target genes of lncRNA KCNQ1OT1 have not been explored in radiation therapy for LUSC.

SK-MES-1 and NCI-H226 cells were cultured to achieve 90% confluence and then exposed to 0, 2, 4, 6, 8, and 10 Gy 6 Mv X-rays at room temperature with a radiation distance of 100 cm and a radiation area of 10 cm × 10 cm for 4 h. After cell passage, the procedure was repeated. The surviving cells were the radioresistant cells (SK-MES-1R and NCI-H226R). After 8 passages, cells were used for the subsequent experiments.

According to the kit instructions, total RNA was extracted by the TRIzol method (Invitrogen), and cDNA was obtained by reverse transcription using the BestarTM qPCR RT kit (DBI Bioscience, Shanghai, China). The levels of lncRNA KCNQ1OT1 and miR-491-5p in cells were examined by RT-qPCR analysis with SYBR green master mix (Thermo Fisher Scientific). Primer sequences are exhibited in Table 1.

The sequences of primers used in the RT-qPCR assay

After digestion and counting, the treated SK-MES-1R and NCI-H226R cells were seeded in 6-well plates with 400 cells/well. After incubation for 12 days, cells were fixed using methanol for 10 min and dyed with crystal violet for 10 min. After washing, the cells were air dried, and the number of clones was taken and counted.

Cell proliferation was monitored by the EdU assay kit (Life Technologies). EdU solution (10 µM) was added to the cells in 24-well plates, and cells were cultured for 2 h at 37 ℃. After fixation using 4% formaldehyde for 20 min, the EdU-stained cells were examined. Next, the cells were treated with Hoechst 33342 for 20 min, and the results were visualized under a fluorescence microscope (Olympus, Tokyo, Japan).

As reported by a previous study (31), we also used the Magna RIP RNA-Binding Protein Immunoprecipitation kit (Millipore, Billerica, USA) to conduct the anti-AGO2 RIP assay. Extracts of the treated SK-MES-1R and NCI-H226R cells in RIP buffer were incubated with normal rabbit IgG (Proteintech Group, Inc.; Wuhan, China) and AGO2 antibodies (Cell Signaling Technology), which were combined with magnetic beads. We isolated the immunoprecipitated RNAs and examined genes using RT-qPCR. 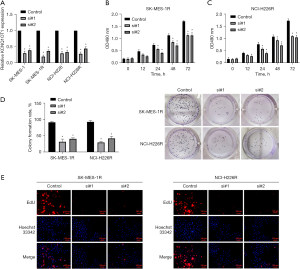 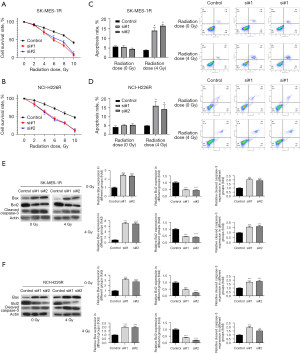 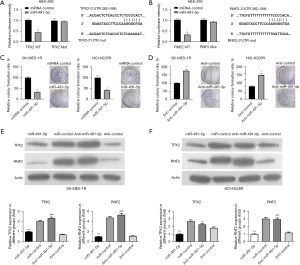 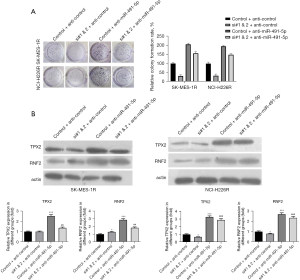 Lung cancer has been considered to be one of the biggest contributors to cancer-related deaths worldwide (34). As a vital subtype of lung cancer, the incidence of LUSC is also increasing yearly (35). At present, radiotherapy has become one of the crucial methods of LUSC treatment because it can inhibit tumor growth and induce cell apoptosis. Increasing the radiosensitivity of tumor cells has become the most effective strategy for LUSC radiotherapy (36). However, the progression of LUSC is a multifactorial and multi-step process, and the carcinogenesis mechanism is still not very clear. At present, there is no effective biological target to increase radiosensitivity. In recent years, more and more evidence has confirmed that lncRNAs can participate in tumor progression through multiple pathways (37,38). Over the past decade, significant efforts have been made to bring ncRNA-based therapies to clinical use, some of which have received FDA approval. However, trial results to date have been contradictory, with some studies reporting effective results and others showing limited efficacy or toxicity (39,40). More important, studies have found that lncRNAs are involved in regulating the radiosensitivity of tumors (41,42). For instance, LINC02532 contributes to the radiosensitivity of clear cell renal cell carcinoma (43). LINC00958 could suppress radiosensitivity in colorectal cancer (44), and lncRNAs, such as PVT1 (45) and TUG1 (46), can also enhance radiosensitivity by promoting the apoptosis of tumor cells. Therefore, investigating the mechanism of lncRNAs in LUSC can lay the foundation for the improvement of radiosensitivity.

MiRNAs are a group of crucial regulatory factors in cancers, and are closely related to the progression of NSCLC (55). Studies have discovered that lncRNAs can serve as “sponges” of miRNAs to reduce miRNA abundance, thus alleviating the inhibition effect of miRNAs on the downstream target genes (56,57). Research has shown that the lncRNA/miRNA/mRNA axis can play vital roles in regulating the biological behaviors and radiosensitivity of various cancer cells, such as hepatocellular carcinoma (58), pancreatic cancer (59), lung adenocarcinoma (60), nasopharyngeal carcinoma (61), and ovarian cancer (62), among others. We also predicted the target miRNAs of lncRNA KCNQ1OT1 through a bioinformatics tool, and miR-491-5p, miR-133b, miR-15a, and miR-7 were screened as the potential target miRNAs of lncRNA KCNQ1OT1. Several studies have confirmed that miR-491-5p can function as a tumor suppressor in many types of cancers, such as osteosarcoma (63), colorectal cancer (64), gastric cancer (65), prostate cancer (66), nasopharyngeal carcinoma (67), and NSCLC (68). After experimental verification, we also discovered that miR-491-5p was a regulatory target of lncRNA KCNQ1OT1, and miR-491-5p could also be markedly upregulated by lncRNA KCNQ1OT1 knockdown.

Furthermore, through bioinformatics and experimental validation, we proved that TPX2 and RNF2 might be the potential target genes of miR-491-5p. As a microtubule-associated protein, TPX2 is essential for microtubule formation and can regulate many crucial biological processes (69,70). The aberrant expression of TPX2 has a vital relationship with the progression of human malignant tumors (71,72). RNF2, a member of the polycomb gene family, is a ubiquitin ligase with ring structure (73). Recent research has also confirmed that RNF2 is highly expressed in human malignant tumors, and is associated with the proliferation, invasion, and prognosis of tumors (74,75). Another study showed that silencing of RNF2 could promote the radiosensitivity of NSCLC (76). In our study, we also revealed that miR-491-5p could markedly downregulate TPX2 and RNF2 expression in radioresistant LUSC cells. In addition, knockdown of lncRNA KCNQ1OT1 could also markedly inhibit the proliferation of LUSC through miR-491-5p to regulate TPX2 and RNF2.

We demonstrated that lncRNA KCNQ1OT1 could markedly induce the radioresistance of LUSC by directly targeting miR-491-5p to reduce TPX2 and RNF2 expression. Therefore, we uncovered that the lncRNA KCNQ1OT1/miR-491-5p/TPX2 or RNF2 axis is correlated with the radioresistance of LUSC cells. In the future, this conclusion will be further validated in clinical and in vivo samples.

Funding: This work was supported by the Natural Science Foundation of Hebei Province (No. H2019206291).

Reporting Checklist: The authors have completed the MDAR reporting checklist. Available at https://jtd.amegroups.com/article/view/10.21037/jtd-22-1261/rc

Conflicts of Interest: All authors have completed the ICMJE uniform disclosure form (available at https://jtd.amegroups.com/article/view/10.21037/jtd-22-1261/coif). The authors have no conflicts of interest to declare.