Lung cancer is one of the most frequently diagnosed cancers and the leading cause of cancer-related deaths worldwide (1). Non-small cell lung cancer (NSCLC) accounts for about 85% of all lung cancers. The majority of NSCLC patients are diagnosed with advanced disease and are treated with chemotherapy (2). However, the overall response rate to chemotherapy in NSCLC patients is only 30–40%, and the median survival time is below 12 months (3). The promising anti-tumor activity of immune checkpoint inhibitors (ICIs), such as programmed cell death-1/programmed cell death-ligand 1 (PD-1/PD-L1) antibodies, has led to regulatory approvals of these agents for the treatment of a variety of malignancies (4). Numerous clinical trials (5-9) have proved that ICIs treatment has brought about a new dawn for NSCLC patients’ treatment, with very durable responses and long-term benefits. However, the benefit brings by ICIs is only limited to a subset of NSCLC patients, of which the overall response rate was about 20% (10), while some even experiencing serious adverse reactions. Therefore, biomarkers that can predict response to NSCLC patients treated with ICIs are being extensively investigated for further advance precision immunotherapy. PD-L1 expression and tumor mutational burden (TMB) have so far been the most widely studied predictors of clinical benefit in advanced NSCLC patients treated with ICIs (11,12), although these biomarkers require pathological tissue specimens and biomarkers cannot accurately predict the response to ICI treatment (13-16). Thus, identification of convenient and noninvasive biomarkers is urgently needed for advanced NSCLC patients receiving ICI therapy.

Inappropriate activation of both coagulation and fibrinolysis is usually discovered in carcinoma patients, especially in those with metastatic disease (17-20). Plasma D-dimer, the smallest cross-linked protein produced in the proteolytic process, is a marker for detecting malignancy and is of great significance for the clinical exclusion of tumor-related thrombosis (21). Previous studies have shown the predictive role of plasma D-dimer in many malignancies treated with chemotherapy, including lung cancer (22-26), colorectal cancer (27), gallbladder carcinoma (20), and breast cancer (28). However, whether pretreatment D-dimer can predict therapeutic efficacy and prognosis in advanced NSCLC patients receiving ICI treatment remains unclear. Hence, we aimed to determine whether pretreatment D-dimer levels could predict clinical benefits from ICIs in advanced NSCLC patients. We present the following article in accordance with the REMARK reporting checklist (available at https://jtd.amegroups.com/article/view/10.21037/jtd-22-1363/rc).

We retrospectively collected advanced NSCLC patients from the Chinese People’s Liberation Army General Hospital (Beijing, China) between January 2015 and March 2019. Patients were selected by the following inclusion criteria: (I) NSCLC diagnosed by histology evidence; (II) clinical stage IIIB–IV classified according to the 8th edition of the TNM classification for NSCLC; (III) patients received ICIs treatment for at least 6 weeks, and treatment response were evaluated at least once time; (IV) pretreatment D-dimer levels were measured within 5 days before the first ICI treatment.

D-dimer was a routine clinical examination in our center, for the patients who were newly diagnosed as cancer patients, and the cancer patients who routinely accept anti-tumor treatment, at least 1 day before their anti-cancer therapy. D-dimer was measured by nephelometry immunoassay with the STA-Liatest D-Di kit as instruction. The reference for normal D-dimer level was 0–0.5 µg/mL.

The study was conducted in accordance with the Declaration of Helsinki (as revised in 2013). This study was approved by the Institutional Ethics Committee of the Chinese PLA General Hospital (No. S2018-092-01). The individual consent for this retrospective analysis was waived.

Patients were divided into a normal D-dimer group (≤0.5 µg/mL) and high D-dimer group (>0.5 µg/mL) based on the upper limit of the reference for normal pretreatment D-dimer levels. The optimization-based approach was applied to balance baseline covariates between the two groups (30). Each patient was weighted according to the following criteria: (I) absolute value of standardized mean difference less than 0.15, and (II) variance ratio of 0.67 (1/1.5) to 1.5. The PASS software (version 11.0) was used to validate the effective sample size in the weighted sample (α=0.05, 1-β=0.8, proportion in control group =0.3, accrual time =5 years). Chi-square test was used to calculate intergroup differences in ORR. Survival data was analyzed by the Kaplan-Meier method and log-rank test. Cox proportional hazards models calculated hazard ratio (HR) with its 95% confidence interval (CI). All statistical tests were bilateral with a significance level of 0.05. All statistical analyses were performed with R software, using the packages of WeightIt version 0.5.1 (https://cran.r-project.org/web/packages/WeightIt/index.html) for optimization-based methods and survey version 3.36 (https://cran.r-project.org/web/packages/survey/index.html) in the weighted samples.

A total of 277 advanced NSCLC patients treated with ICIs at the Chinese PLA General Hospital between January 2015 and March 2019 were included. The last follow-up date was July 6, 2020. The median follow-up time was 15.0 months with a 95% CI of 12.2 months to 17.6 months. Detailed characteristics of patients are shown in Table 1. The median age of this cohort was 61 years (range, 33–91 years). Among the patients, 76.9% were male, 79.4% were stage IV according to the 8th edition of TNM staging by the International Association for the Study of Lung Cancer (31), 64.6% were non-squamous NSCLC patients, 35.4% were squamous cell lung cancer patients, 62.8% had a history of smoking, and about 90% had an ECOG PS of 0−1. Treatment lines 1, 2, and ≥3 accounted for 31.4%, 35.0%, and 33.6% of patients, respectively. Patients receiving ICI monotherapy accounted for 45.5% of the sample, and 54.5% of patients received ICIs in combination with chemotherapy or antiangiogenic agents. A total of 265 (95.7%) patients received PD-1 inhibitor treatment and 12 patients (4.3%) received PD-L1 inhibitor treatment. A total of 207 patients (74.7%) had pretreatment high D-dimer levels. At the start of ICI treatment, 35 patients (12.6%) who had VTE or high risk of thromboembolism (myocardial infarction, cerebral infarction, and surgery) were receiving anticoagulant therapy (Aspirin, Clopidogrel, Rivaroxaban, Ticagrelor, or Nadroparin calcium). The patient size-277 was validated appropriate by PASS software (version 11.0) which showed the sample size should not be less than 260.

Characteristics of 277 patients with advanced NSCLC

Baseline covariates balanced between the 2 groups

An optimization-based approach was used to balance baseline covariates between the normal D-dimer group and the high D-dimer group. We matched a total of 61 patients in the normal D-dimer subset and 204 patients in the high D-dimer subset. The aim was to eliminate some of the differences between the 2 groups during the matching process. 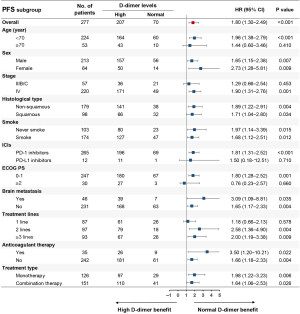 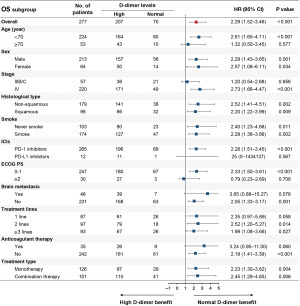 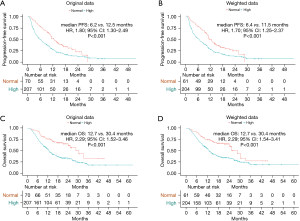 Although progress has been made in cancer immunotherapy, and the use of ICIs has had considerable positive effects on some NSCLC patients, most do not benefit from ICI immunotherapy (7). The predictive ability of some molecules, such as PD-L1 and TMB in advanced NSCLC patients treated with ICIs remains unsatisfactory due to a lack of sensitivity and specificity (32), and thus additional predictive biomarkers are urgently needed in clinical practice to avoid the use of ineffective treatment (10).

Coagulation disorders, which are frequently observed in cancer patients (33), promote tumor angiogenesis, invasion, and metastasis, and ultimately lead to a poor prognosis for tumor patients (34,35). Plasma D-dimer is a stable end product degraded by plasmin-induced fibrinolytic activity and increased by enhanced fibrin formation and fibrinolysis (36). Plasma D-dimer is a useful biomarker for diagnosing VTE, cardiovascular disease, disseminated intravascular coagulation, infectious disease, and cancer (37-39). Previous studies reported that increased plasma D-dimer levels were associated with poor survival in cancer patients through VTE (40,41), which could increase the risk of bleeding during antitumor therapy (42-44). The research of Wang et al. showed that a baseline signature of low D-dimer values was associated with a better survival outcome for early lung cancer (stage I–II) patients treated with surgery (45). Gao et al. found that D-dimer was strongly associated with lymph node metastasis in NSCLC (46-48). Louneva et al. reported that the level of plasma D-dimer was closely related to the prognosis of solid tumors (49). Some clinical studies have also shown that plasma D-dimer level was significantly associated with poor prognosis in lung cancer treated with chemotherapy (50,51). Similarly, a meta-analysis found that for postoperative NSCLC patients, high pretreatment D-dimer level was an independent predictor of poor prognosis (52). Another meta-analysis, which included 7 studies involving 964 patients from China, showed that elevated pretreatment D-dimer level was significantly correlated with worse OS and PFS in patients with small cell lung cancer (53). However, the predictive role of D-dimer in advanced NSCLC patients treated with ICIs remains unclear.

Chen et al. found that increasing the threshold value of D-dimer from 0.5 to 0.981 µg/mL was statistically significant across different age groups (54). They concluded that the cut-off value of 0.5 µg/mL could not reflect the correlation between age and D-dimer. We did not consider the influence of age factors on D-dimer level and used the critical cut-off value of 0.5 µg/mL. There were other limitations in the present study. First, we only analyzed the prognostic value of pretreatment D-dimer level and not the relationship between changes in D-dimer with efficacy and prognosis of ICI treatment. Second, although we used the optimization-based method to eliminate the bias of baseline covariates between the high D-dimer group and normal D-dimer group, other covariates we did not consider may have also been potential confounders. Third, the retrospective nature of this study may have resulted in unknown selection bias. In addition, how D-dimer affects the efficacy and prognosis of advanced NSCLC patients treated with ICIs remains unclear and needs further investigation.

Pretreatment plasma D-dimer could serve as a predictive biomarker for the efficacy and prognosis of advanced NSCLC patients treated with ICIs. Patients with pretreatment high D-dimer levels may have poor PFS and OS. Further studies are warranted for validation.

Funding: This work was supported by funding from the Military Health Special Research Project under grant 20BJZ37.

Reporting Checklist: The authors have completed the REMARK reporting checklist. Available at https://jtd.amegroups.com/article/view/10.21037/jtd-22-1363/rc

Conflicts of Interest: All authors have completed the ICMJE uniform disclosure form (available at https://jtd.amegroups.com/article/view/10.21037/jtd-22-1363/coif). All authors report that this study was supported by the Military Health Special Research Project under grant 20BJZ37. The authors have no other conflicts of interest to declare.

Ethical Statement: The authors are accountable for all aspects of the work in ensuring that questions related to the accuracy or integrity of any part of the work are appropriately investigated and resolved. The study was conducted in accordance with the Declaration of Helsinki (as revised in 2013). This study was approved by the Institutional Ethics Committee of the Chinese PLA General Hospital (No. S2018-092-01). The individual consent for this retrospective analysis was waived.