Severe sepsis/septic shock is one of the leading causes of death among critically ill patients worldwide. Each year in the USA, sepsis leads to about 750,000 hospitalizations and 210,000 deaths (10% of total deaths) (1). The total annual hospitalization cost of sepsis is approximately $14 billion USD (2), causing heavy economic burden to families and society.

The pathogenesis of sepsis is quite complex, mainly due to the invasion of various pathogenic microorganisms into the host, causing systemic inflammatory response, microcirculation disturbance, and abnormal immune function, which lead to disruptions in homeostasis, tissue hypoperfusion, and organ dysfunction. The mortality rate of sepsis is as high as 40–50% (3). The heart is one of the target organs that can be easily damaged by sepsis. About 40% of patients with sepsis (especially those with severe sepsis and septic shock) have myocardial involvement (4), which is characterized by systolic and/or diastolic dysfunction and reduced cardiac index and left ventricular ejection fraction (LVEF). In addition, there might be a decrease in cardiac responsiveness to fluid resuscitation and catecholamine stimulation (5). Once sepsis is combined with myocardial injury, it can aggravate the evolution of the disease, increase the risk of multiple organ failure (6), and affect the prognosis of the disease, with a mortality rate of up 70% (7).

At present, the mechanism behind myocardial injury caused by sepsis has not been clearly elucidated. Most researchers believe that the excessive inflammatory response in patients with sepsis might be involved in cardiac dysfunction (8,9). The excessive inflammatory response can lead to the production of pro-inflammatory cytokines, chemokines, and other inflammatory mediators in circulation. For example, the increase of inflammatory factors, such as interleukin (IL)-1β and IL-6, and the high expression of tumor necrosis factor alpha (TNF-α), can suppress myocardial function (10). In addition, signaling pathways, such as toll-like receptor 4 (TLR4)/nuclear factor kappa B (NF-κB), p38 mitogen-activated protein kinase (p38-MAPK), and extracellular signal-regulated kinase (ERK), are also involved in regulating the body’s inflammatory response and cellular energy metabolism at different stages of sepsis, therefore inducing cardiomyocyte apoptosis and leading to cardiac dysfunction.

Together with other inflammatory mediators, neutrophil elastase (NE) can promote vascular endothelial cell injury and increase vascular permeability, and therefore play an important role in myocardial cell injury. Sivelestat sodium, a selective NE inhibitor, has been found to be able to lower the levels of IL-1β and TNF-α in the serum of septic animals, reduce the infiltration and activation of inflammatory cells, and inhibit the expressions of IL-8 and high mobility group box B1 (11). However, to the best of our knowledge, no study had investigated whether sivelestat sodium could inhibit the production and activation of some inflammatory factors, alleviate damage to cardiomyocytes, and reduce the incidence of sepsis-induced myocardial dysfunction. In the present study, an animal model of sepsis-induced myocardial injury (SIMI) was created, and sivelestat sodium was used for drug intervention. The changes in serum inflammatory factors and cardiac function indexes and the pathological findings of myocardial tissues before and after drug administration were compared to evaluate the effectiveness of sivelestat sodium in treating SIMI. Furthermore, we explored the potential signaling pathways involved in the pathogenesis of SIMI to inform future treatments of this condition. We present the following article in accordance with the ARRIVE reporting checklist (available at https://jtd.amegroups.com/article/view/10.21037/jtd-22-1309/rc).

Fifty male Sprague-Dawley (SD) rats (SPF grade, 8 weeks old) were used. The facilities were maintained at a temperature of 20–26 ℃ and a relative humidity of 80%. Experiments were performed after 1-week adaption. The animals were fasted for 12 h, with access to water ad libitum before the operation. A protocol was prepared before the study without registration. The animal experiment is conducted according to the project license (No. Med-Eth-Re[2022]351) granted by the Medical Ethics Committee of Hainan General Hospital, which conforms to the animal care and use guidelines of Hainan General Hospital.

The sepsis group and the sham operation group were intraperitoneally injected with normal saline 4 mL/kg at 24, 48, 72, and 96 h after the procedure, respectively. The sivelestat sodium L, M, and H groups were intraperitoneally injected with 1.6, 4.8, and 10 mg/kg of sivelestat sodium, respectively, at 24, 48, 72, and 96 h, respectively (12). Blood sample (2 mL) was collected from the eyeball under anesthesia at 96 h after operation in each group, followed by heparin anticoagulation (10 U/mL), centrifugation at 1,006.2 ×g for 15 min at 4 ℃, and serum harvesting. Food and water consumption in each group was observed during normal saline/drug administration. The 7-day survival rate was calculated in each group.

CTnT, CK-MB, BNP, IL-6, TNF-α, and IL-1β levels were measured using the ELISA kits. The left ventricular systolic pressure (LVSP), left ventricular end-diastolic pressure (LVEDP), and maximum rate of LVP rise (dP/dtmax) were measured using a color Doppler ultrasound scanner for small animals. After the measurements were completed, the cardiac tissues (left and right ventricles) were harvested for later use. For the heart tissues harvested from rats in each group, the left ventricular myocardium was separated, and the apical myocardial tissue sized 0.6 cm × 0.4 cm × 0.3 cm was cut, fixed in 4% paraformaldehyde, routinely embedded in paraffin, and then sliced. After deparaffinizing and routine hematoxylin-eosin staining, the sections were observed under a light microscope and photographed. The distribution of ERK1/2 proteins in the heart tissues of rats in each group was detected by immunohistochemistry. The expressions of ERK1/2 proteins were detected by Western blotting. The activation of apoptosis-related proteins Bcl-2 and Bax was also detected by Western blotting.

All data are expressed as mean ± standard deviation. The comparisons of means among multiple groups were based on analysis of variance. Multiple comparisons were performed by using Least Significant Difference (LSD) t-test. P<0.05 was considered statistically significant.

After CLP, rats in each group became lethargic and had decreased food and water consumption. During laparotomy, a large amount of ascites with fecal odor and yellow-brown turbidity was seen, and the cecal wall of the punctured and ligated segment was edematous and dark purple. The mortality rate of rats in the sivelestat sodium group was lower than that in the sepsis group. 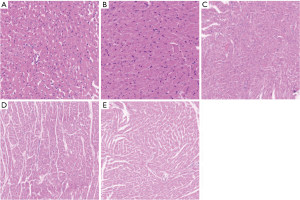 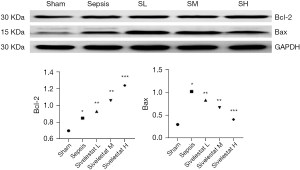 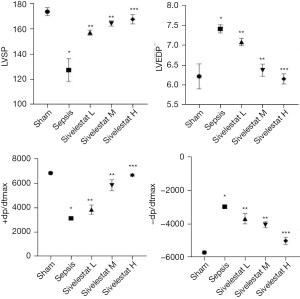 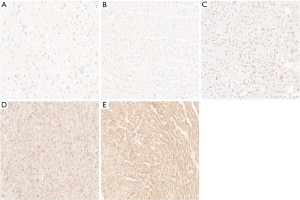 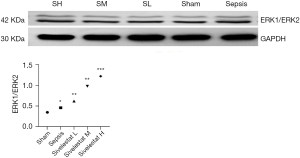 Both acute and chronic inflammation in the body can adversely affect cardiac function. It is caused by abnormal myocardial metabolism, imbalance between anti-inflammatory and pro-inflammatory, and disturbance of immune regulation. At present, treatments for cardiac dysfunction caused by inflammation mainly include improving myocardial blood supply, ameliorating adverse cardiac remodeling, inhibiting the activity of the renin–angiotensin–aldosterone system, slowing down heart rate, and increasing myocardial contractility, but with poor effectiveness.

CTnT and CK-MB are biomarkers of myocardial injury. When myocardial cells are damaged, CTnT and CK-MB are released from the cytoplasm into the blood circulation, and higher serum concentrations of these 2 markers indicate more severe myocardial injury. BNP is an important indicator for evaluating heart function. Sheyin et al. found that patients with sepsis or septic shock with elevated troponin had a significantly higher mortality rate (13). Post et al. found that the level of BNP was significantly increased when the LVEF decreased in sepsis patients (14). After the condition was improved, the serum level of BNP decreased synchronously with the increase of LVEF. The present study showed that CTnT, CK-MB, and BNP were significantly increased in the sepsis group, which were inversely correlated with the changes of LVSP, LVEDP, and +dp/dtmax. Therefore, there is prominent myocardial damage in the evolution of sepsis, which is related to the release of serum inflammatory factors. The changes in inflammatory indicators during sepsis are highly valuable for judging the severity of cardiac dysfunction and predicting the prognosis. The levels of CTnT and CK-MB in the serum of the rats were significantly reduced after treatment with sivelestat sodium, suggesting that sivelestat sodium could improve myocardial injury in CLP-induced sepsis models.

The pathophysiological mechanisms of myocardial injury in sepsis are complex and can be affected by multiple pathways. ERK1 and ERK2 are serine/threonine protein kinase belonging to the mitogen-activated protein kinase family. Research has shown that ERK1/2 phosphorylation can inhibit the stress of the endoplasmic reticulum during myocardial ischemia and reperfusion, therefore reducing the apoptosis of cardiomyocytes and exerting a cardioprotective effect (15). In our current study, it was found that the ERK1/2 protein was distributed, to different degrees, in the myocardial tissue of rats in each group. In the sivelestat sodium group, the expression level of the ERK1/2 protein gradually increased with the increase of drug dose, reducing the release of inflammatory factors in sepsis myocardial tissue, decreasing the apoptosis of myocardial cells, and improving cardiac function via the ERK1/2 signaling pathway.

In conclusion, sivelestat sodium can reverse the injury and apoptosis of cardiomyocytes in septic patients by activating the ERK1/2 signaling pathway, and therefore has a protective effect on cardiomyocytes.

Reporting Checklist: The authors have completed the ARRIVE reporting checklist. Available at https://jtd.amegroups.com/article/view/10.21037/jtd-22-1309/rc

Conflicts of Interest: All authors have completed the ICMJE uniform disclosure form (available at https://jtd.amegroups.com/article/view/10.21037/jtd-22-1309/coif). The authors have no conflicts of interest to declare.

Ethical Statement: The authors are accountable for all aspects of the work in ensuring that questions related to the accuracy or integrity of any part of the work are appropriately investigated and resolved. The animal experiment is conducted according to the project license (No. Med-Eth-Re[2022]351) granted by the Medical Ethics Committee of Hainan General Hospital, which conforms to the animal care and use guidelines of Hainan General Hospital.