Coronary artery bypass grafting (CABG) has become the primary treatment for patients with ischemic cardiomyopathy (ICM) (1). However, such patients have a high surgical mortality rate and a high incidence of adverse events, and their prognosis is closely related to the improvement of postoperative cardiac function (2,3). According to a report (4), nearly 40% of ICM patients have no improvement in cardiac function after CABG, which increases their risk of death from any cause. Scars cannot be revascularized, and cardiac magnetic resonance with late gadolinium enhancement (CMR-LGE) is the gold standard for detecting myocardial scarring (5). The goal of this study was to analyze cardiac function associated with global preoperative myocardial scarring assessed by CMR-LGE in patients with ICM after CABG. We present the following article in accordance with the STROBE reporting checklist (available at https://jtd.amegroups.com/article/view/10.21037/jtd-22-846/rc).

The study was conducted in accordance with the Declaration of Helsinki (revised in 2013). Approval from the Ethics Committee of Anzhen Hospital Affiliated to Capital Medical University was obtained before the study (No. 2021104X) and individual consent for this retrospective analysis was waived. This was a single-center, retrospective, observational cohort study. Between September 2017 and September 2021, 129 patients diagnosed with ICM and who received preoperative CMR-LGE at Beijing Anzhen Hospital were enrolled in the study. According to the inclusion and exclusion criteria, 57 patients were finally analyzed. The inclusion criteria were as follows: (I) left ventricular ejection fraction (LVEF) of less than or equal to 40% on transthoracic echocardiography; (II) diagnosis of coronary heart disease by percutaneous coronary angiography and subsequent CABG; (III) preoperative CMR-LGE and 6-month postoperative evaluation of cardiac function by echocardiography; (IV) follow-up coronary computed tomography angiography (CTA) showing patency of the bypass grafts; and (V) complete clinical dataset. The exclusion criteria were as follows: (I) acute myocardial infarction within the previous 3 months; (II) concurrent combined cardiac surgery (such as aortic valve, mitral valve, tricuspid valve, congenital heart disease, great vascular disease, ventricular aneurysm resection, etc.); (III) concomitant arrhythmias, such as atrial fibrillation; (IV) preoperative complications, such as a malignant tumor and chronic renal failure; and/or (V) preoperative emergency surgery performed for cardiogenic shock. 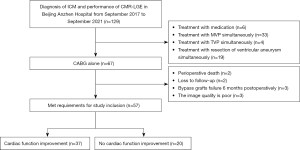 Clinical baseline characteristics, such as demographic information, echocardiography, and CMR-LGE data, were collected retrospectively. The patients’ follow-up information was collected via phone, WeChat, or outpatient clinic records. Based on the results of transthoracic echocardiography 6 months after CABG surgery, the patients were divided into the following 2 groups: the improved cardiac function group, defined as change of LVEF (ΔLVEF) greater than or equal to 5% (6), and the no improved cardiac function group, defined as ΔLVEF less than 5%. The baseline characteristics of the 2 groups were compared to analyze the risk factors for cardiac function failure after CABG.

The CMR-LGE examination was performed on patients 1 week before CABG surgery, and images were collected in the supine position. A 3.0 T superconducting magnetic resonance system was adopted (Verio; Siemens Medical Solutions, Erlangen, Germany), and 32 channels were dedicated to the heart phase-controlled front coil. All sequences were gated by electrocardiogram. Phase-sensitive inversion recovery (PSIR) magnetic moments were used to prepare rapid small-angle excitation sequences for late enhancement of cardiac imaging approximately 10 minutes after intravenous injection of 0.1 mmol/kg of gadopentetate dimeglumine contrast agent under the following conditions: repeat time/echo time, 4.1 ms/1.56 ms; field of view, 350 mm2; matrix, 2.1 mm × 1.4 mm × 5.0 mm; turn angle, 35°; and, acceleration factor, 2. The thickness of the left ventricular short-axis imaging layer was 8 mm, with an interval of 0 mm. The imaging layers of the left ventricular 2-heart cavity and 4-heart cavities were both 5 mm thick without any separation.

Left ventricular myocardial activity was analyzed using the cvi42 v 5.14.0 (Circle Cardiovascular Imaging Inc., Calgary, AB, Canada) post-processing software. The analysis was conducted by an associate senior radiologist with at least 5 years of CMR-LGE experience. The radiologist was unaware of the clinical data and information used to group the patients. The endocardium and epicardium (excluding papillary muscle) were delineated at the short axis level of the PSIR sequence, and the interventricular septum insertion point was marked at the short axis level to delineate the region of the normal myocardium. Normal myocardium was defined as having no LGE and being distant from the LGE area, whereas scarred myocardium was defined as being within the LGE area. The LGE region was defined as the myocardial gray threshold 5 standard deviations above the normal myocardium mean. By subtracting the end-diastolic pericardium volume and then multiplying it by 1.05 g/cm3, the software calculated the left ventricular myocardial mass (LV mass) and late gadolinium enhancement mass (LGE mass) and then calculated the percentage of cardiac scar (LGE mass/LV mass × 100%) (Figure 2). 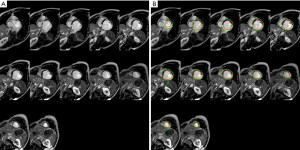 Figure 2 Identification and quantification of scar myocardium by CMR-LGE. (A) A typical LGE image is obtained on a continuous short-axis section. (B) Myocardial scarring (yellow) is detected after delineating the left ventricular endocardium (red) and epicardium (green). This image is published with the participant’s consent. CMR-LGE, cardiac magnetic resonance late gadolinium enhancement.

All patients underwent medial sternotomy. Depending on the patient’s condition and the surgeon’s experience, off-pump or on-pump CABG was performed. The skeletal or pedicled method was used to obtain the internal mammary artery, and the open technique was used to obtain the great saphenous vein. The left internal mammary artery was preferred for transplantation to the left anterior descending branch, and the great saphenous vein was sequentially branched out to other coronary arteries. All patients had anatomically complete revascularization (7), which implied that revascularization was performed for vessels with a coronary artery diameter of more than 1.5 mm and a stenosis of 50% or more, with at least one location indicated by coronary angiography. The quality of bridge anastomosis was evaluated using transit time flow measurement.

The patients were returned to the intensive care unit (ICU) with tracheal intubation and given electrocardiogram monitoring, ventilator-assisted breathing, and hemodynamic monitoring. Arterial blood gas analysis was performed immediately after surgery, on the first day after surgery, and before removal of the endotracheal intubation, to facilitate timely adjustment of the water and electrolyte metabolism and acid-base balance disorders. All patients received guideline-directed medical therapy after undergoing CABG (1), including the following: renin-angiotensin system inhibitors, such as an angiotensin-converting enzyme inhibitor, an angiotensin type II receptor blocker, or an angiotensin receptor and neprilysin inhibitor; a beta-blocker; and a mineralocorticoid receptor antagonist, such as spironolactone, in addition to long-term antiplatelet drugs.

These patients were followed up regularly at 3 and 6 months postoperatively and then every 6 months. If patients presented with symptoms of heart failure or coronary heart disease after surgery, they should be followed up at that time to adjust medication and other treatments. At follow-up, cardiac function improvement, New York Heart Association (NYHA) classification, and the occurrence of major adverse cardiovascular and cerebrovascular events (MACCEs) were evaluated. After 6 months, improvement in cardiac function was defined as ΔLVEF greater than or equal to 5% on transthoracic echocardiography. The MACCEs included all-cause death, myocardial infarction, stroke, and readmission for heart failure. Meanwhile, the patency of bridge vessels was evaluated using coronary CTA. The patency of bridge vessels was assessed using the Fitzgibbon classification system (8), with Fitzgibbon-A considered patency and Fitzgibbon-B/O considered occlusion. All patient data were obtained from our institution’s online database and collected using standardized data collection forms by trained staff who were unaware of the purpose of this study.

The Student’s t-test presented the normal distribution measurement data as mean ± standard deviation, the Mann-Whitney U test presented the non-normal distribution measurement data as median (M) and quartile spacing [M (P25, P75)], and the chi-square test or Fisher’s exact test as frequency (rate) presented the count data as frequency (rate). Univariate logistic regression analysis examined the relationship between variables and no improvement in cardiac function. The multivariate logistics regression analysis included the univariate analysis of variables with P<0.05 and those thought to be clinically related to endpoint events. The Kaplan-Meier method was used to calculate the MACCE-free survival curves of the 2 groups. The log-rank test was used to check if the survival curves of the 2 groups differed. For the data analysis, the software packages SPSS 23.0 (IBM Corp., Armonk, NY, USA) and Stata 16 (StataCorp, College Station, TX, USA) were used.

Preoperative baseline data of the 2 groups

Comparison of surgical data between the 2 groups

A bilateral internal mammary artery bypass was not used in either group. There were no significant differences between the 2 groups in the use of cardiopulmonary bypass, left internal mammary artery utilization rate, number of bypass procedures, operation time, and blood product dosage (P>0.05). Although the ICU stay time, ventilator use time, and postoperative hospital stay in the unimproved group were higher than those in the improved group, the differences were not statistically significant (P>0.05; Table 2).

Operation data of the 2 groups

In ICM patients, univariate analysis showed that left ventricular size, left ventricular volume, and myocardial scarring were factors associated with no improvement in cardiac function after CABG. Multivariate regression analysis of these variables revealed that only myocardial scarring was a risk factor for no improvement in cardiac function (OR =1.44; 95% CI: 1.13–1.83; P=0.003; Table 4). 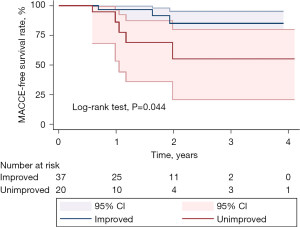 Follow-up results of the improved and unimproved groups

This study evaluated the degree of myocardial scarring using CMR-LGE to identify whether cardiac function improved after CABG in ICM patients. Since no improvement in cardiac function has a significant adverse impact on patient prognosis, our findings are important for patients who cannot benefit from CABG. Alternative therapies are available for ICM patients who do not benefit from CABG (1,21), such as continued drug therapy, a permanent left ventricular assistance device, heart transplant, or cell therapy.

This study had several limitations. Firstly, the study was a single-center, retrospective, observational cohort study with a small sample size, which may have resulted in selection bias. Secondly, the slice gap during a CMR-LGE scan can affect the accurate measurement and calculation of myocardial scarring and affect the accuracy of predicting the improvement of cardiac function. Thirdly, this study only considered the overall degree of myocardial scarring present in the left ventricle but did not consider the distribution of myocardial scarring. The distribution of cardiac scarring may also be a potential factor influencing the improvement of cardiac function. In follow-up work, we will conduct additional research to address these gaps. Finally, patients failed to undergo another CMR-LGE examination during postoperative follow-up, resulting in a lack of dynamic evolution over time. This was because the outpatient CMR-LGE reexamination took 1–3 months, which affected the postoperative examination.

The authors would like to thank all the reviewers who participated in the review and Jumatay Biekan (Circle Cardiovascular Imaging, Calgary, AB, Canada) for his assistance in CMR-LGE image post-processing.

Funding: This study was supported by the National Natural Science Foundation of China (No. 81870181).

Reporting Checklist: The authors have completed the STROBE reporting checklist. Available at https://jtd.amegroups.com/article/view/10.21037/jtd-22-846/rc

Conflicts of Interest: All authors have completed the ICMJE uniform disclosure form (available at https://jtd.amegroups.com/article/view/10.21037/jtd-22-846/coif). The authors have no conflicts of interest to declare.

Ethical Statement: The authors are accountable for all aspects of the work in ensuring that questions related to the accuracy or integrity of any part of the work are appropriately investigated and resolved. The study was conducted in accordance with the Declaration of Helsinki (revised in 2013). Approval from the Ethics Committee of Anzhen Hospital Affiliated to Capital Medical University was obtained before the study (No.2021104X) and individual consent for this retrospective analysis was waived.