The term hemoptysis refers to the expectoration of blood from the lower respiratory tract or lung parenchyma (1). Hemoptysis is most commonly caused by respiratory infection, bronchiectasis, lung cancer, and pulmonary tuberculosis (2-4). The majority of hemoptysis cases are self-limiting; however, massive hemoptysis can be life-threatening (5,6). Treatment for patients with massive hemoptysis requires bronchial arterial embolization or surgery, while conservative management may be considered for patients with non-life-threatening hemoptysis (5,6). Systemic hemostatic drugs, such as pituitrin, hemocoagulase, and tranexamic acid, can also be administered simultaneously (6). Tranexamic acid is used to prevent bleeding associated with traumatic injury, surgery, and congenital fibrinogen deficiency (7,8).

Hemocoagulase batroxobin is a hemostatic drug that reduces bleeding time and the need for blood transfusion in patients with trauma or those undergoing surgery (9-12). Batroxobin forms a fibrin clot by degrading fibrinogen into fibrin, which exerts a hemostatic effect (13,14). Batroxobin can be topically administered using bronchoscopy with an infusion or systemically to patients with hemoptysis (6,15-17). However, there have been reports of bleeding associated with acquired hypofibrinogenemia following batroxobin administration (12,18-20). The risk factors and prognosis related to acquired hypofibrinogenemia in hemoptysis patients treated with batroxobin are not well established. In this study, we evaluated the risk factors for and prognosis of acquired hypofibrinogenemia in hemoptysis patients treated systemically with batroxobin. We present the following article in accordance with the STROBE reporting checklist (available at https://jtd.amegroups.com/article/view/10.21037/jtd-22-717/rc).

This study retrospectively evaluated the data of hospitalized patients who were administered hemocoagulase batroxobin for hemoptysis in a single tertiary hospital in South Korea from January 2020 to April 2021. Plasma fibrinogen was measured in all enrolled patients before the administration of intravenous batroxobin and at least once after receiving treatment. Patients with a baseline plasma fibrinogen level of <150 mg/dL, those without plasma fibrinogen measurements, or those aged <18 years were excluded. The study was conducted in accordance with the Declaration of Helsinki (as revised in 2013). The Institutional Review Board at Chonnam National University Hospital, Gwangju, Republic of Korea approved the study (ID: CNUH-2022-367). The requirement for informed consent was waived because of the retrospective nature of the study.

Acquired hypofibrinogenemia was defined as a baseline plasma fibrinogen level of >150 mg/dL, dropping to a follow-up level of <150 mg/dL after batroxobin administration (21,22). We also classified the hypofibrinogenemina as mild (100–200 mg/dL), moderate (50–100 mg/dL), and severe (10–50 mg/dL) (23). The Fibrinogen Clauss assay was used to measure plasma fibrinogen concentration. The definition of uncontrolled bleeding was hemoptysis that persisted despite treatment or recurred after treatment. Cryptogenic hemoptysis was defined as an absence of any cause after investigation of chest computed tomography and bronchoscopy for hemoptysis (1). Massive hemoptysis was defined as hemoptysis of more than 100 mL/24 h (6,24). DIC was diagnosed following the algorithm of the International Society on Thrombosis and Haemostasis (25).

Batroxobin was administered according to the clinician’s judgment regardless of bronchial artery embolization. Batroxobin at 10–20 National Institute of Health Unit (NIHU) was diluted with 500 mL of normal saline and administered intravenously for 24 hours. Batroxobin administration was stopped after hemoptysis improved clinically.

All data were expressed as the median [interquartile range (IQR)] or number (percentage). Demographic and clinical variables were compared between the hypofibrinogenemia group and non-hypofibrinogenemia group using the chi-square test (for categorical variables) or the Mann-Whitney U test (for continuous variables). A receiver operating characteristic (ROC) curve was plotted based on baseline plasma fibrinogen levels to predict hypofibrinogenemia. The Youden index was used to calculate optimal baseline fibrinogen cut-offs, sensitivities, and specificities in the ROC curve. Factors associated with acquired hypofibrinogenemia were selected using univariate logistic regression analysis. Subsequent multivariate logistic regression analyses included variables with P values of <0.25 in the univariate analysis using a forward method. Although DIC and chronic liver disease had P values greater than 0.25 in the univariate analysis, we included both variables in the multivariate logistic regression analysis as they were associated with acquired hypofibrinogenemia. Owing to the interaction between the total dosage and the duration of batroxobin administration, two models were developed, each utilizing each variable separately. We used the Kaplan-Meier analysis to evaluate the 30-day mortality. Factors associated with acquired hypofibrinogenemia were identified using a Cox-regression analysis that included variables with P values of <0.25 in the univariate analysis using the forward method. All statistical analyses were performed using SPSS version 25.0 (IBM, Armonk, NY, USA) and MedCalc version 20.023 (Ostend, Belgium); a P value of <0.05 was considered statistically significant.

During the study period, 399 patients were administered batroxobin for hemoptysis and had available plasma fibrinogen measurements (Figure 1). Of these, 216 were excluded for the following reasons: plasma fibrinogen level was only measured once (n=190), inconsistent timing of batroxobin use and fibrinogen measurements (n=22), and initial hypofibrinogenemia ≤150 mg/dL (n=4). Finally, 183 patients were enrolled, of whom 75 had acquired hypofibrinogenemia after the administration of batroxobin. 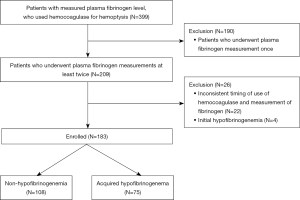 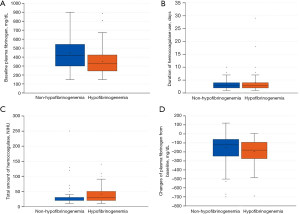 Risk factors associated with acquired hypofibrinogenemia in both models 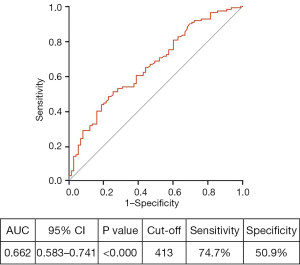 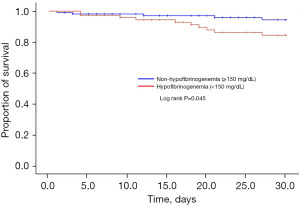 Figure 4 Kaplan-Meier curve for 30-day survival after the initiation of batroxobin administration.

This study had several limitations. First, this was a retrospective study conducted in a single center, which limits the generalizability of our findings. Second, we enrolled patients whose plasma fibrinogen levels were measured before the administration of intravenous batroxobin and at least once after receiving treatment. However, there is a possibility that some patients with hypofibrinogenemia were excluded as plasma fibrinogen was not measured every day. Third, the possibility of other factors affecting the reduction in plasma fibrinogen levels could not be excluded completely. Hemodilution and DIC are common causes of acquired hypofibrinogenemia. The medical charts in this study were thoroughly reviewed, and no hemodilution conditions were found. However, hemodilution could not be completely excluded from hydration because of the retrospective study design. The effect of DIC on hypofibrinogenemia and 30-day mortality was also evaluated in univariate and multivariate analyses. Fourth, because most hemoptysis patients in our institution receive batroxobin, we could not evaluate hypofibrinogenemia and prognosis based on batroxobin use. Additional studies are needed to investigate the hemostatic effect, hypofibrinogenemia occurrence, and prognosis of batroxobin in hemoptysis patients. Fifth, to avoid missing important variables in the multivariate analysis, we selected variables with a P value within 0.25 in the univariate analysis. However, the possibility of missing some important variables cannot be completely ruled out.

Reporting Checklist: The authors have completed the STROBE reporting checklist. Available at https://jtd.amegroups.com/article/view/10.21037/jtd-22-717/rc

Conflicts of Interest: All authors have completed the ICMJE uniform disclosure form (available at https://jtd.amegroups.com/article/view/10.21037/jtd-22-717/coif). The authors have no conflicts of interest to declare.

Ethical Statement: The authors are accountable for all aspects of the work in ensuring that questions related to the accuracy or integrity of any part of the work are appropriately investigated and resolved. The study was conducted in accordance with the Declaration of Helsinki (as revised in 2013). The Institutional Review Board at Chonnam National University Hospital, Gwangju, Republic of Korea approved the study (ID: CNUH-2022-367). The requirement for informed consent was waived because of the retrospective nature of the study.