Pancoast tumors account for nearly 5% of lung tumors encompassing the apex of the lung. These tumors commonly involve the ribs, periosteum, brachial plexus or subclavian vessels (1). Also known as superior pulmonary sulcus tumors, most of these tumors are non-small-cell lung cancers (NSCLCs) (2). Surgery can be technically challenging at times, with mortality and complication rate higher than standard lobectomy (3-5).

Although tri-modality therapy is standard of care, many patients are offered alternative treatment plans for various reasons. Previous literature has not focused on the percentage of patients who receive standard of care compared to other approaches. As such, our goals were to identify treatment patterns and outcomes in patients with node-negative Pancoast tumors. The National Cancer Database (NCDB) was utilized over a 13-year period to perform this study. We present the following article in accordance with the STROBE reporting checklist (available at https://jtd.amegroups.com/article/view/10.21037/jtd-22-1077/rc).

The NCDB was developed as a joint project of the Commission on Cancer of the American College of Surgeons and the American Cancer Society as a comprehensive database of cancer cases in the United States (16). The NCDB is a clinical oncology database which acquires hospital registry data from over 15,000 Commission on Cancer-accredited facilities. The NCDB contains over 70% of all newly diagnosed cancer cases and has more than 34 million records overall. The NCDB was queried for all cases of Pancoast tumors from 2004 to 2017. Although there is no strict delineation for Pancoast tumor in the NCDB, all patients with upper lobe tumors who underwent chest wall resection were included in the analysis. This is consistent with the definition of Pancoast tumors being those of the apex of the lung invading surrounding structures including nerve roots, rib bone and periosteum, subclavian vessels, and chest wall (17). Only patients with node-negative disease were included in the analysis to reduce confounding from more advanced disease. The data used in the study were derived from a de-identified NCDB file. The American College of Surgeons and the Commission on Cancer have not verified and are not responsible for the analytic or statistical methodology employed, or the conclusions drawn from these data by the investigators. The study was conducted in accordance with the Declaration of Helsinki (as revised in 2013). The study was approved by the University of Texas Medical Branch institutional review board (IRB# 19-0168) and individual consent for this retrospective analysis was waived as the database we received was de-identified prior to us receiving it.

The following variables were collected for each patient: age, gender, race/ethnicity, medical insurance status, income level, Charlson-Deyo comorbidity score, distance from the patient’s residence to the treating institution, urban vs. rural location of patient residence, year of diagnosis, clinical stage, pathologic stage, type of treating institution, high-volume vs. low-volume lobectomy institution, histology, type of treatment given (surgery, chemotherapy, radiation), time from diagnosis to start of treatment and to mortality. Income was measured as the median income of the zip code in which the patient lived. A center was considered to be high-volume if it performed more than an average of 40 or more lobectomies per year, as 40 was the guideline by the Leapfrog Group during the midpoint of the study (18). To calculate yearly volume, we divided the total number of cases at each institution by the number of years of the study. The primary endpoint was the receipt of neoadjuvant chemoradiation. The secondary endpoints were overall survival in both the neoadjuvant and upfront surgery groups.

Demographics, cancer characteristics, facility characteristics and treatment patterns were presented as means, standard deviation, median, and quartile 1 and 3 for continuous variables, and as frequencies and percentage for categorical variables. A logistic regression model was used to compare treatment patterns and outcomes. The logistic regression model was adjusted for demographics and facility characteristics. To examine the effect of treatment pattern on survival, unadjusted survival rates were estimated by using Kaplan-Meier method and compared with the log-rank test. Multivariate Cox proportional hazard models were used to estimate hazard ratios adjusted for demographics and facility characteristics. All patients were censored at the last contact date or at the end of study (December 31, 2019). The proportional hazard assumption was evaluated first by visual inspection of the Kaplan-Meier curve and then by adding the interaction between race and log (time) to the model and checking for significance. Race was reported as Caucasian, African American and “other” since the “other” category was only 2.9% of the cohort. The “other” category consisted of Hispanic, Asian, Pacific Islander and Native American. In both the Kaplan-Meier analysis and the Cox proportional hazards model, patients diagnosed in 2017 were excluded due to not having follow-up information. All analyses were conducted using SAS 9.4 (Cary, NC, USA). Patients who received (I) chemotherapy only or (II) radiation treatment only before surgery were excluded from the analysis. When subdividing the upfront surgery group, a patient was considered to have received adjuvant treatment if it was received within 3 months of the date of surgery.

After exclusion of patients with missing data and those that did not fit the above criteria, a total of 2,910 patients were identified to have Pancoast tumors and no positive lymph nodes. Demographic data for this cohort is displayed in Table 1. Mean age was 63.7±10.5 years. Approximately 34% of the cohort was between the ages of 60 and 70. The majority of the cohort was Caucasian, male and lived in metropolitan areas. In the cohort there were 25% (717/2,910) of patients who underwent neoadjuvant chemoradiation prior to surgery. Table 2 shows patients who underwent neoadjuvant chemoradiation treatment compared to the rest of the cohort. When comparing patients who had neoadjuvant chemoradiation treatment versus the rest of the cohort, patients who received surgery first were older, less likely to have private insurance and were more likely to be treated at low-volume centers. There were no significant differences in racial distribution, income or distance from home to the treating facility. Table S1 shows the multivariate logistic regression analyses of these results. In this supplemental table we have included the results of the multivariate analyses with corresponding 95% confidence intervals. 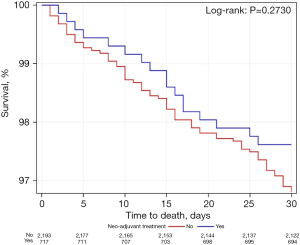 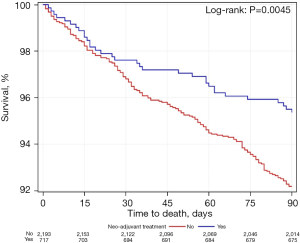 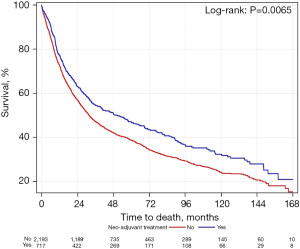 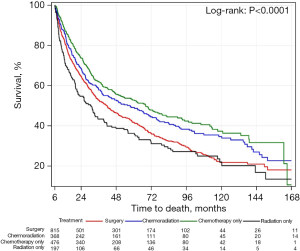 In our study we examined trends in treatment patterns for Pancoast tumors over a 13-year period using the NCDB. Standard of care treatment for Pancoast tumors has changed from upfront surgical resection followed by adjuvant therapy to a trimodality approach with neoadjuvant chemoradiation followed by surgical resection (1,19). This trimodality approach has been associated with improved outcomes and longer disease free and overall survival (20-22). Given that trimodality treatment is considered standard of care for Pancoast tumors, we wanted to investigate how often this is being applied to patients nationally. We queried the NCDB starting in 2004 when this trimodality approach was accepted as standard of care. The NCDB does not specifically identify tumors as Pancoast tumors. As such, we used upper lobe tumors which required chest wall resections as a surrogate for Pancoast tumors. Due to this limitation, we may have not captured every patient with a Pancoast tumor during this study time, and additionally may have included some upper lobe tumors that were not Pancoast tumors. But the fact that (I) the majority of tumors were squamous cell cancer and (II) there was overall improvement in survival with neoadjuvant treatment suggests that the majority of patients did have Pancoast tumors. Furthermore, the categorization of Pancoast tumors is relatively subjective in clinical practice. Although these tumors are labeled as superior sulcus tumors, most clinicians categorize these tumors based on their initial surgical resectability and distance from critical structures such as the brachial plexus and the great vessels (23,24). But there is no absolute distance that can be measured or recorded which will define a Pancoast tumor absolutely. As such, we feel that this study and use of the NCDB can have useful results to guide treating providers.

When examining the treatment patterns in the United States over our study period, we observed that patients who received neoadjuvant chemoradiation followed by surgical resection had the best survival. This supports the body of literature that has demonstrated that neoadjuvant therapy contributes to improved survival in patients with Pancoast tumors (25). We were surprised, however, with the low adherence to this standard of care treatment in our cohort. Of the 2,910 unique patients in the cohort, less than 25% received neoadjuvant chemoradiation. Although this trend suggests that the majority of patients are receiving surgery upfront, further multi-institutional studies should be performed prospectively to get a more precise idea about the percentage of patients with Pancoast tumors who receive neoadjuvant chemoradiation treatment.

When examining the upfront surgery group only, patients who received adjuvant chemoradiation had the best survival overall when compared to those who received chemotherapy alone, radiation alone, or no adjuvant therapy. This pattern suggests that a multidisciplinary treatment plan is beneficial even if surgery is performed upfront. Our study did progress over a long time period. During this time, there were significant advancements in neoadjuvant regimens and surgical conduct (26). We feel that this study may prompt future studies to examine whether practice patterns have changed in the last few years as the database is updated.

Reporting Checklist: The authors have completed the STROBE reporting checklist. Available at https://jtd.amegroups.com/article/view/10.21037/jtd-22-1077/rc

Conflicts of Interest: All authors have completed the ICMJE uniform disclosure form (available at https://jtd.amegroups.com/article/view/10.21037/jtd-22-1077/coif). ICO serves as an unpaid editorial board member of Journal of Thoracic Disease from February 2021 to January 2023. The other authors have no conflicts of interest to declare.

Ethical Statement: The authors are accountable for all aspects of the work in ensuring that questions related to the accuracy or integrity of any part of the work are appropriately investigated and resolved. The study was conducted in accordance with the Declaration of Helsinki (as revised in 2013). The study was approved by the University of Texas Medical Branch institutional review board (IRB# 19-0168) and individual consent for this retrospective analysis was waived as the database we received was de-identified prior to us receiving it.