Pneumonia is the leading cause of infectious death worldwide (1), and acute lower respiratory infection is the leading cause of death in children under 5 years old in developing countries (2). Influenza virus is one of the predominant causative agents of seasonal flu and infectious mortality worldwide. Most influenza-related mortality is not due to the viral infection alone (3,4). Recent studies suggested that bacterial pneumonia secondary to influenza virus infection was identified as the major cause of increased hospitalizations and deaths during influenza virus epidemics (5,6).

Active immunization with a vaccine is a common strategy to protect humans from microbial infections. Vaccination with attenuated bacterial or inactivated bacterial cells were often used to induce a protective immunity response. In the 1990’s, a candidate inactivated vaccine was tested in acute P. aeruginosa pneumonia model (17). It showed that vaccination not only decreased the P. aeruginosa titers in the lungs but also improved the survival rate.

Six to eight weeks old female BALB/c mice were housed with 24-hour access to food and water. The study protocol was approved by the Guangzhou Institutes of Biomedicine and Health (GIBH) Institutional Animal Care and Use Committee (ID: 2013028). All animal experiments were performed under the guidelines established by the Association for the Assessment and Accreditation of Laboratory Animal Care.

The mouse-adapted influenza A virus (PR8) was diluted in sterile phosphate-buffered saline (PBS) and with a mouse LD50 (MLD50) of 100 PFU. The P. aeruginosa strain (ATCC27853) was purchased from China General Microbiological Culture Collection Center (CGMCC). The bacterial strain had a MLD50 of 3.2×107 colony-forming units (CFU). 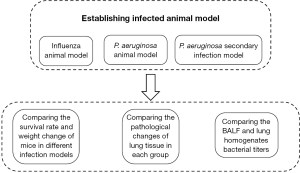 The mice were euthanized 3, 6, 8, or 24 hours post P. aeruginosa infection. The bronchoalveolar lavage was performed with three aliquots of 0.6 mL sterile PBS, and about 1.6 mL in a total of lavage fluid was retrieved for each mouse. Lungs were collected and homogenized in PBS. Ten-fold serial dilutions of BALFs and lung homogenates were inoculated onto Luria-Bertani (LB) agar plates, and bacterial CFU were counted after incubation at 37 ℃ overnight.

Lungs were removed from euthanized mice and fixed immediately with 10% buffered formalin phosphate for 24 hours. After paraffin embedding, representative lateral and medial lung areas were cut into 7 µm thick sections. After deparaffinization, the sections were stained with hematoxylin and eosin, and then observed under microscopy (19).

The P. aeruginosa was cultured in broth to an OD600 of 1.0. The bacterial cells were washed 3 times with PBS and then inactivated with 10% formalin for 1 hour. The complete inactivation efficiency of the bacteria was confirmed by the index of no viable bacteria growing on blood agar. The complete inactivated P. aeruginosa was purified by centrifugation after being shaken in cold PBS for 1 hour, and the purification was repeated 3 times. The vaccine was prepared in PBS with a concentration of 3×1010 cells/mL and immunized after being mixed with an equal volume of aluminum phosphate adjuvant (18).

PcrV expression plasmid (pET22b-PcrV) was made by inserting PcrV gene into the pET-22b vector with C-terminal His-Tag. The E. coli BL21 were transformed with pET22b-PcrV, then cultured in LB containing ampicillin at 37 ℃ and shaken at 250 rpm/min. When OD600 of culture solution arrived at 0.5, the culture was induced with 1 mmol/L IPTG and then shaken for another four hours. The bacterial cells were harvested by centrifugation, and the protein expression was detected by sodium dodecyl sulfate-polyacrylamide gel electrophoresis (SDS-PAGE). PcrV protein was purified by Nickel-Nitrilotriacetic Acid (Ni-NTA) affinity chromatography and identified by Western-blotting using rat anti-His-Tag antibody and horseradish peroxidase (HRP)-labeled goat anti-rat antibody. 1 mg/mL Purified PcrV protein in PBS was mixed with an equal volume of aluminum phosphate adjuvant for immunization.

The data was analyzed by the GraphPad Prism 6.01 software package (GraphPad Software) and statistical significance was determined by unpaired Student’s t-test with two-tailed analysis. Logrank trend test was used to compare the survival rate of the experimental group and the mock control. A P value less than 0.05 was statistically significant. 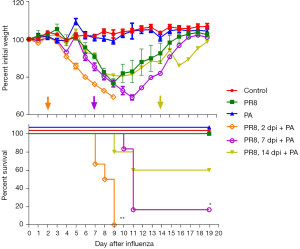 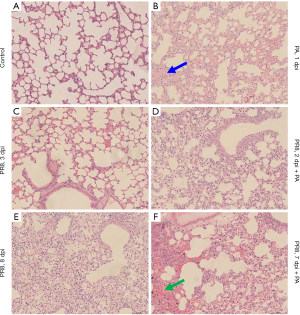 Prior infection of influenza hinders the clearance of P. aeruginosa 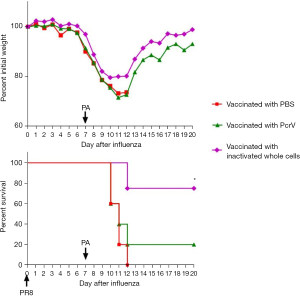 Vaccines against P. aeruginosa have been explored in the past, so far there are no licensed vaccines (17). Currently, several vaccine candidates against P. aeruginosa are under clinical trials, including protein vaccines, inactivated bacterial and attenuated bacterial. Since the protein IC43, OprI, OprF, and PcrV are expressed in most pathogenic P. aeruginosa strains and are associated with P. aeruginosa reproduction or pathogenicity (20), these proteins are selected as promising vaccine candidates. It was reported that infection of P. aeruginosa with type-3 secretion system (T3SS) proteins caused 6-fold higher mortality in patients than without T3SS proteins (21). T3SS proteins expression was correlated with increasing incidence of bacteremia and organ failure induced by P. aeruginosa (19,24). PcrV protein is one of the important components of T3SS and has strong immunogenicity (25-28), which functions as an essential virulence factor to cause acute necrotic cell death and significant lung injury (29). Antibodies against PcrV protein can block the cytotoxicity mediated by T3SS and relieve the acute lung injury caused by P. aeruginosa. Mab166, a monoclonal antibody against PcrV protein from mice, was reported to protect mice from P. aeruginosa infection. In this study, serum against PcrV could inhibit P. aeruginosa growth in vitro. Still, PcrV protein vaccine showed less protection in P. aeruginosa secondary infection mice, indicating that one recombinant protein alone might not be enough to induce sufficient protection. Combination of multiple P. aeruginosa candidate proteins might be a better strategy for developing a candidate vaccine.

Reporting Checklist: The authors have completed the ARRIVE reporting checklist. Available at https://jtd.amegroups.com/article/view/10.21037/jtd-22-1012/rc

Conflicts of Interest: All authors have completed the ICMJE uniform disclosure form (available at https://jtd.amegroups.com/article/view/10.21037/jtd-22-1012/coif). NZ serves as Editor-in-Chief of Journal of Thoracic Disease. All authors report funding from National Natural Science Foundation of China (No. 91442102) and National Science and Technology Major Project of China (No. 2018YFC1200100). The authors have no other conflicts of interest to declare.

Ethical Statement: The authors are accountable for all aspects of the work in ensuring that questions related to the accuracy or integrity of any part of the work are appropriately investigated and resolved. The study protocol was approved by the Guangzhou Institutes of Biomedicine and Health Institutional Animal Care and Use Committee (ID: 2013028). All animal experiments were performed under the guidelines established by the Association for the Assessment and Accreditation of Laboratory Animal Care.