The SCBC valve (Shanghai Cingular Biotech Corporation, Shanghai, China) is designed from the proven CE PerimountTM valve, while incorporates certain new optimizations on the tissue leaflet matching, attachment and manufacturing for the purpose of reducing the leaflet dynamic stress during valve opening and closing. The preclinical study was tested by China Food and Drug Administration with the requirements of the ISO 5840:2005, and all items like fatigue testing, pulsating flow detection, biocompatibility testing have been obtained the requirements. In addition, to bring this newly designed bovine pericardial valve into patients, large animal model study against the current standards of treatment should be launched. Based on previous literatures, the mitral position in juvenile ovine model has been testified appropriate for experimental artificial heart valve implantment for both aortic and mitral bioprosthetic valves (3,4). Five months follow-up has been designed based on the ISO 5840:2005 and it is long enough to cause certain calcification in the bioprosthetic valves in juvenile sheep (5-7). Thus we evaluated the safety and efficacy of the SCBC valve compared with CE PerimountTM valve in juvenile sheep model (3,8,9).

Features of the SCBC valve

The SCBC valve incorporated certain new optimizations on the tissue leaflet matching, attachment and manufacturing based on the CE PerimountTM Valves design to reduce the leaflet dynamic stress during valve opening and closing. As a result, the improvement on the opening consistency and roundness made the EOA increase by about 25% over the CE PerimountTM valve of the same size in vitro tests. In addition, the silicone waffle ring and the polyester (PET) fabric sewing ring from the CE PerimountTM valve was redesigned using Reemay with double velour Dacron sewing cuff in the SCBC valve, which made it more durable, more flexible, less bulkiness, and more conformable to the annulus (Figure 1A-D). Furthermore, improved wireform/stent/sewing ring attachment, through the wireform seated onto the groove formed by the internal polyester and external polyester rings, made the valve structure more stable (Figure 1E). 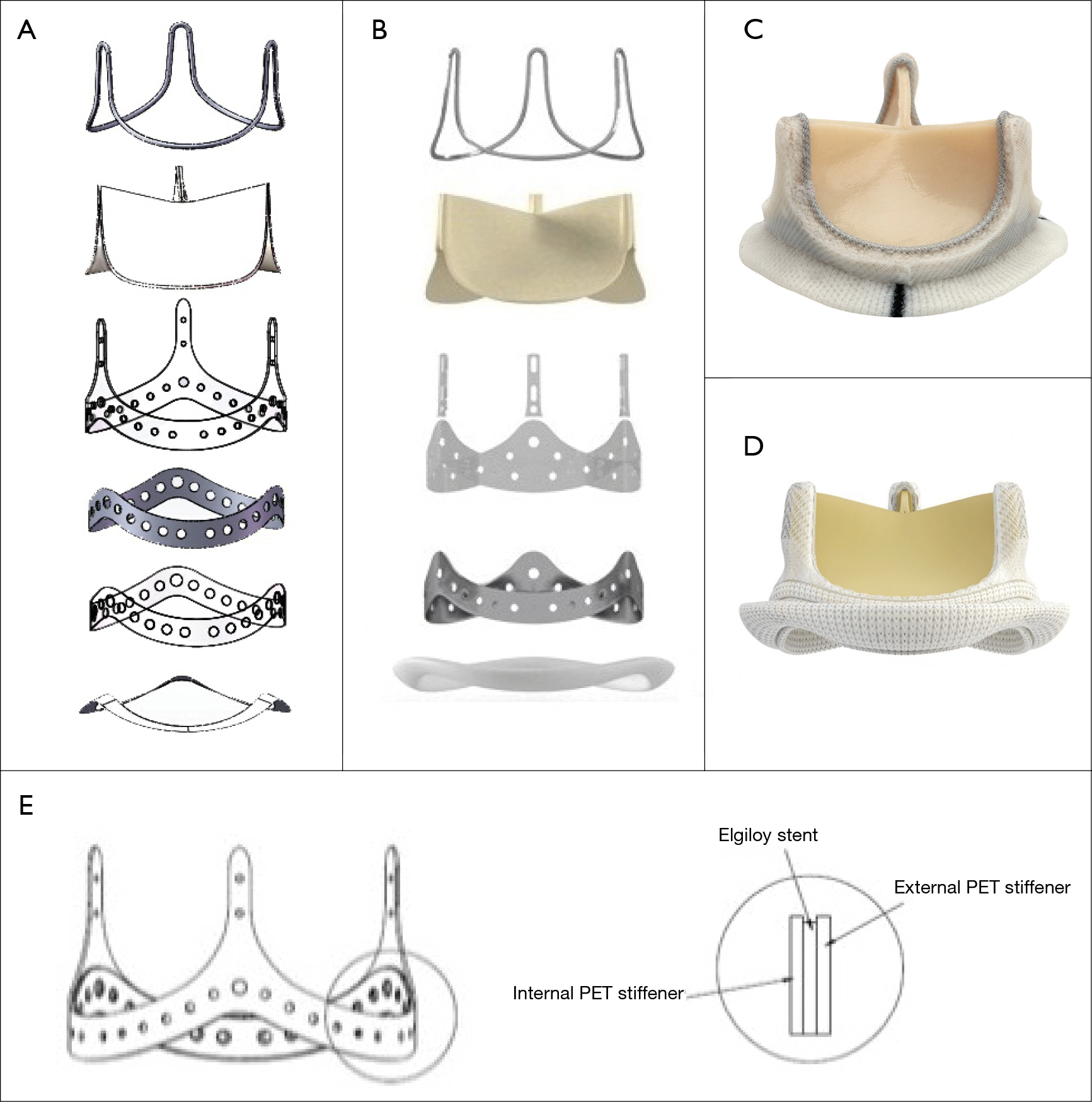 This was a prospective, randomized study performed as an assessment of the SCBC valve compared with the CE PerimountTM valve (6900P with TFX). Three sheep (aged 6–8 months, male) of the control group received CE PerimountTM valve implantations and five sheep (aged 6–8 months, male) of the study group received the SCBC valve implantations. All valves implanted are 25 mm in diameter. The experiment was approved by the Animal Care and Use Committee of Zhongshan Hospital, Fudan University (Shanghai, China) and performed in strict accordance with the recommendations from the Guide for Animal Management Rules from the Ministry of Health of the People’s Republic of China.

The animals were anesthetized and prepared according to a previously published protocol (10). The sheep were premeditated with buprenorphine (0.01 mg/kg) before induction of anesthesia with intravenous propofol (4 mg/kg). An endotracheal tube was placed and the cuff was inflated. Anesthesia was maintained with a mixture of isoflurane (1.5–2%) and oxygen via an anesthetic machine. Fentanyl citrate (0.4 mg/kg/min) was used while the sheep were on cardiopulmonary bypass. Paralysis was induced with intravenous atracurium (0.5 mg/kg) initially followed by boluses (0.1–0.2 mg/kg/h) or as required. The sheep were mechanically ventilated at 1.5 L/min, 25 cm water pressure 8 bpm, 80 to 100 mL tidal volume (4). Amiodarone (5 mg/kg) was administered to prevent arrhythmias.

A left thoracotomy in the fourth intercostal space was performed. Cardiopulmonary bypass was instituted between the descending aorta and the body of the right atrium cannulated through the right atrial appendage. Operation techniques included normothermic cardiopulmonary bypass, the maintenance of a beating heart and the avoidance of excision of the natural valve (11). The bovine pericardial valve was implanted into the mitral position for technological feasibility and tested with saline inflation. Then the left atrium was closed and the cannulas were removed. The chest was closed in layers with a chest drain in the left plural space. Warfarin was given for the first month postoperatively.

After euthanasia, all sheep underwent a full necropsy and were grossly examined. The macroscopic aspect and pliability of the valves were evaluated. The samples of valves, brains, kidneys, lungs, livers and spleens were fixed in 10% buffered formalin and 0.5 µm sections were prepared for Hematoxylin and Eosin (H&E) staining. The pathologist who reviewed the slides was blinded to the groups. Calcium content was measured by X-ray under mammography conditions (Faxitron, Wheeling, IL) to demonstrate and localize calcification. When considering the possible sites of calcification in each valve, scoring each leaflet, each commissure, and each base, there were nine possible sites for calcification on each valve.

We collected and analyzed blood samples at baseline, ten days after valve implantation and the end of the study. The blood samples were submitted to the lab (Shanghai Sixth People’s Hospital) for analyzing.

Pre-experiment was performed and two sheep died due to ventricular fibrillation intraoperatively and low cardiac output postoperatively, respectively. Eight sheep were underwent operations in the formal study and all of them survived until the end of study term and were humanely euthanized.

At autopsy, the valve cusps of both groups had a thin layer of fibrous material on the surface, but the leaflets were soft and flexible. No sheep had evidence of thrombus or vegetation on the valves. We detected extensive fibrocellular pannus on the sewing ring and at the base of all valve leaflets, predominantly on the inflow surface. No noticeable difference was observed in both groups from macroscopic aspect (Figure 2A-D). 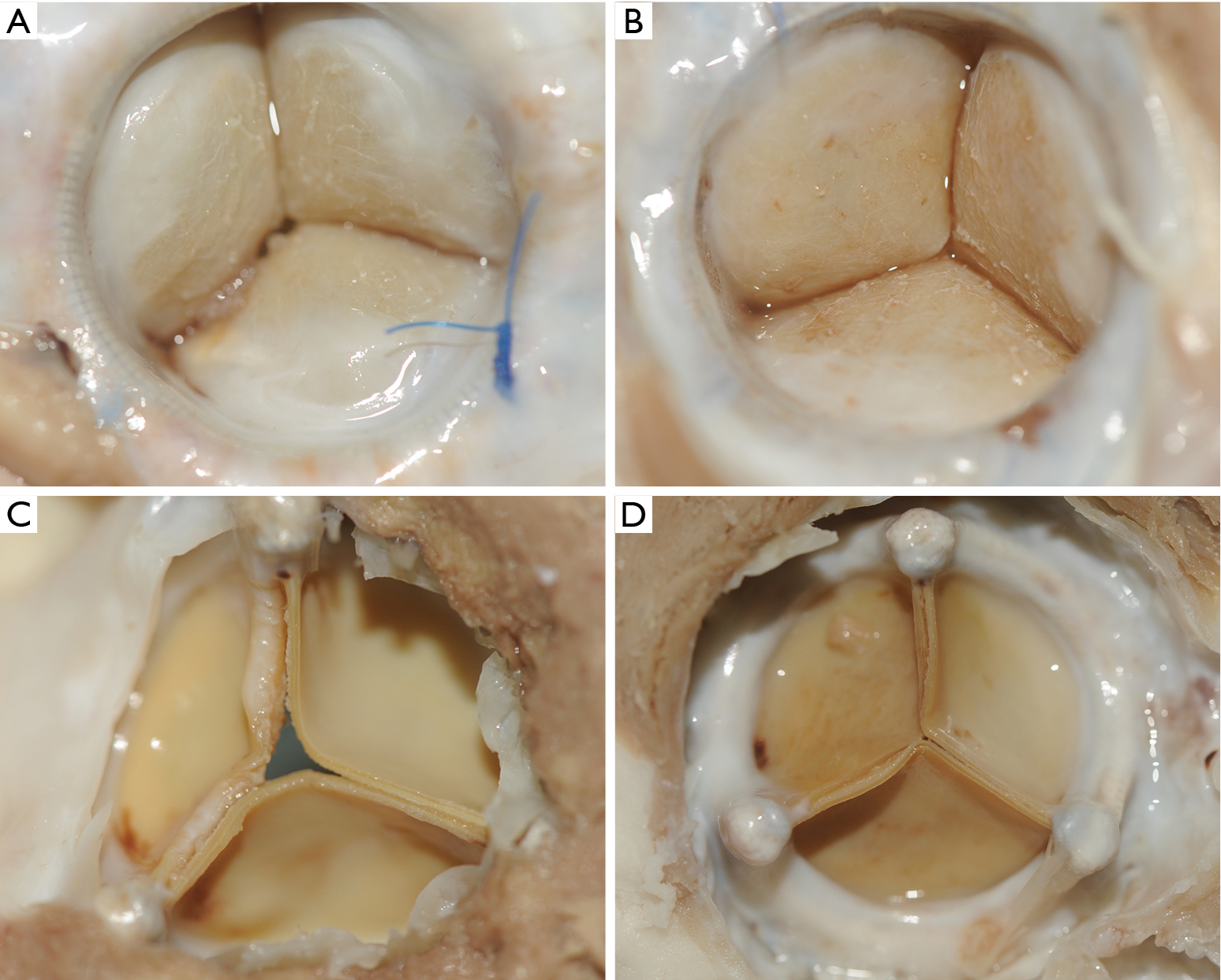 Transthoracic echocardiograms were obtained ten days, three months, and five months after surgery to evaluate the function of the implanted valves. The results of TTE demonstrated that the mean and 95% CI of the mean pressure gradient, pressure half time and peak flow velocity in both groups were not significantly different at all time points (Figure 3). In addition, the regurgitation grades for the SCBC valve and CE PerimountTM valve were similar (Table 1). Both groups showed evidences of mild annular leak, four sheep in the study group and two sheep in the control group, which may be due to operation technology performed with beating heart using running suture. Leaflet mobility was acceptable in all leaflets of valves at different time points. Moreover, there were no signs of valve vegetation and thrombus recorded. 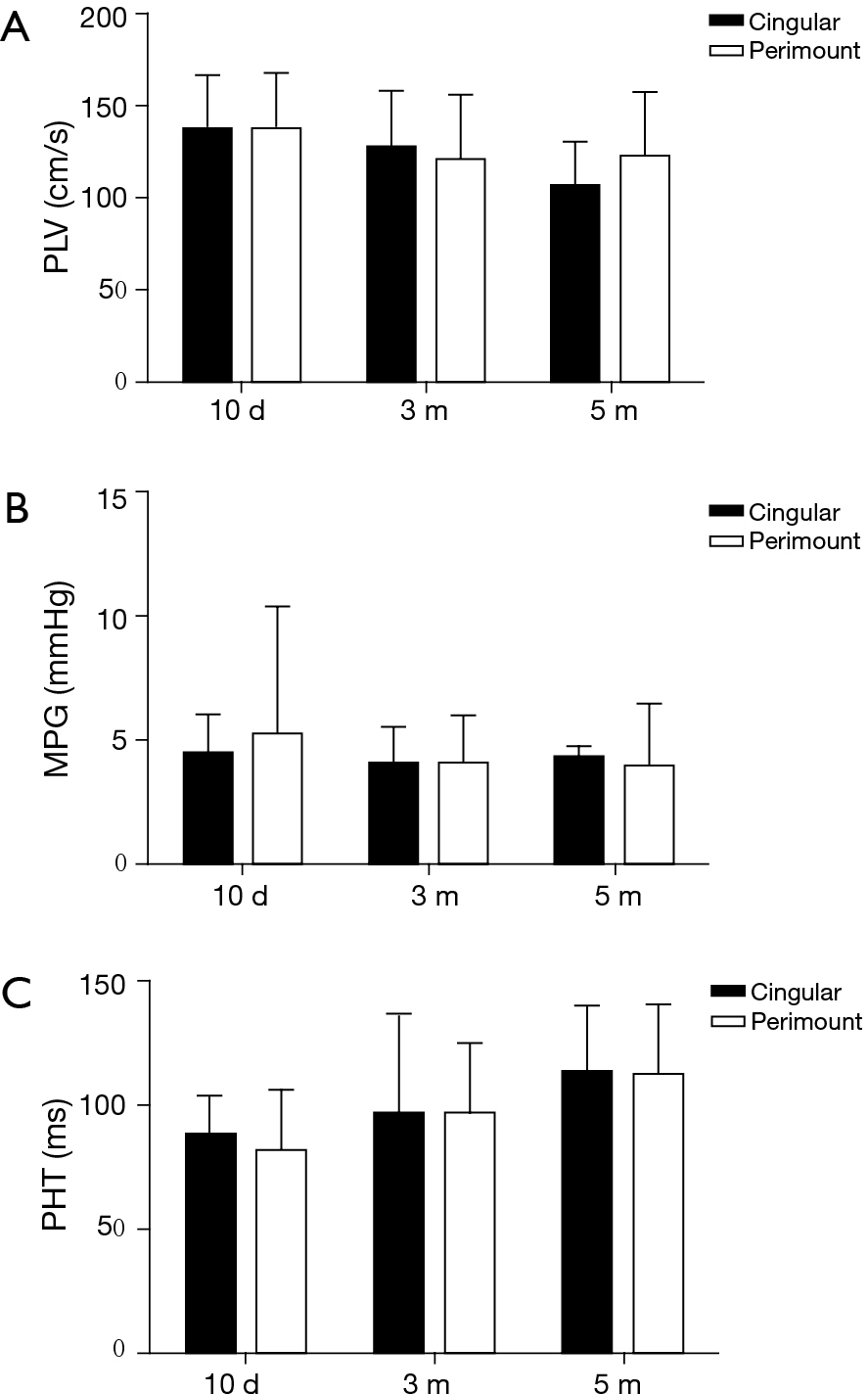 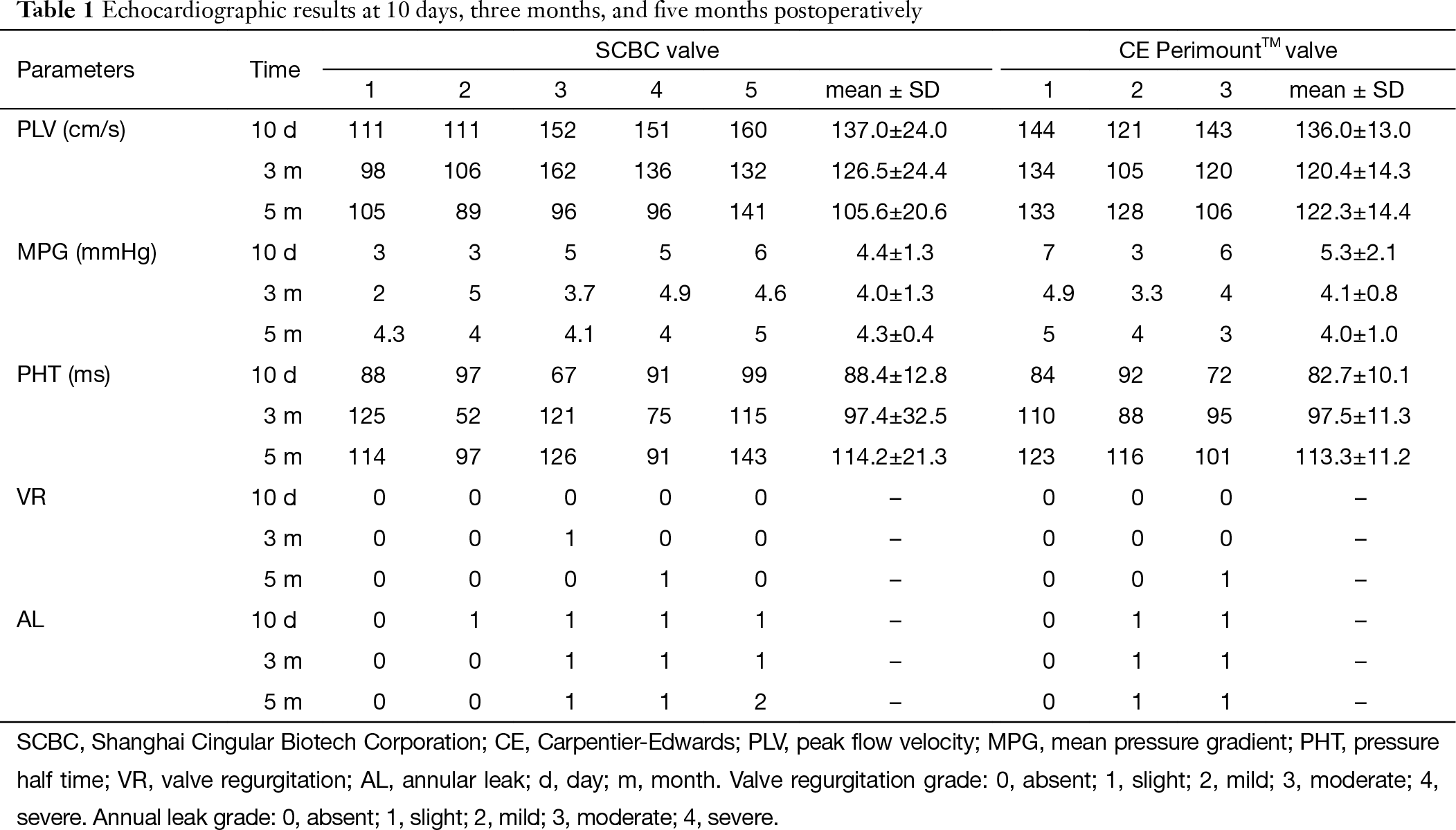 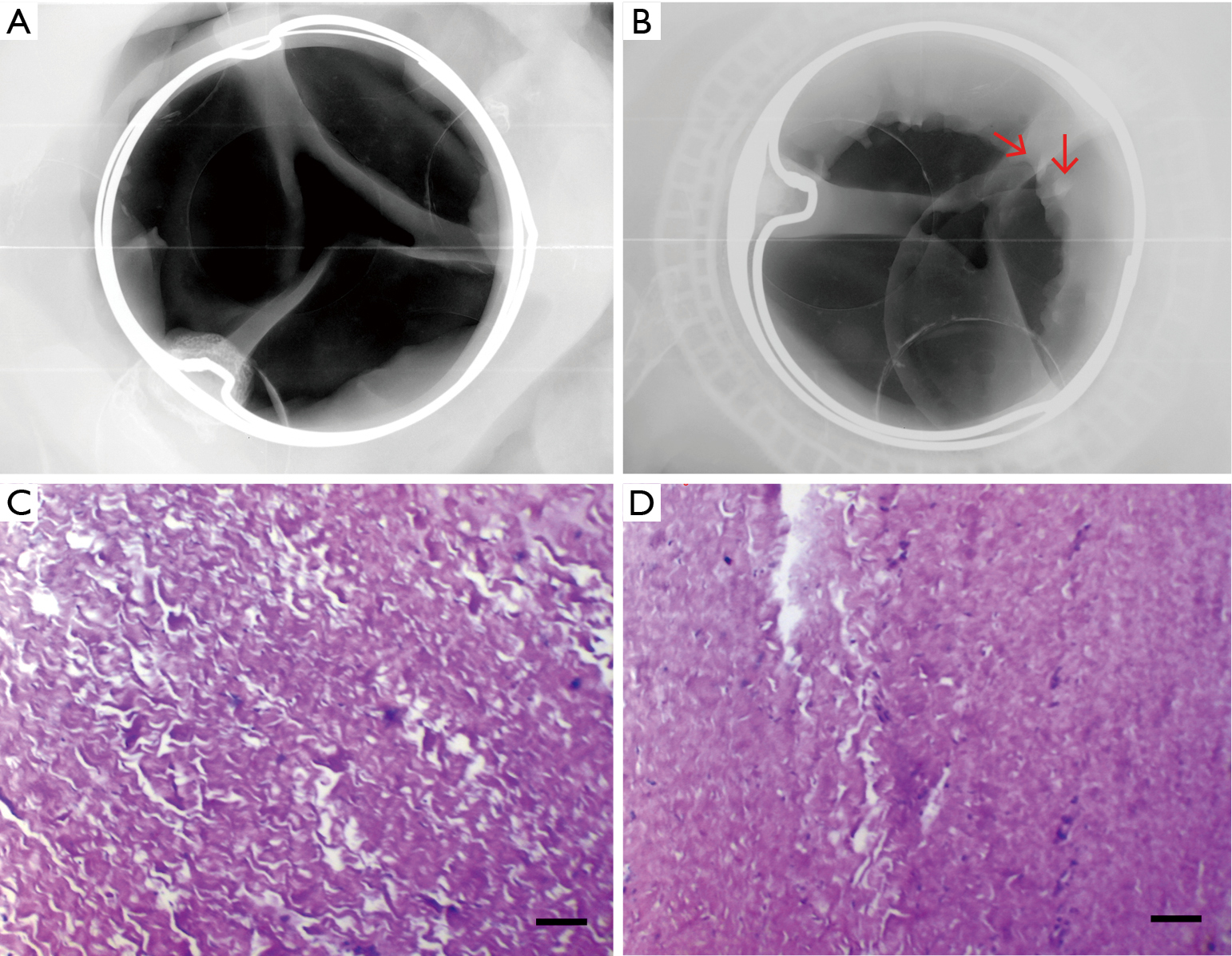 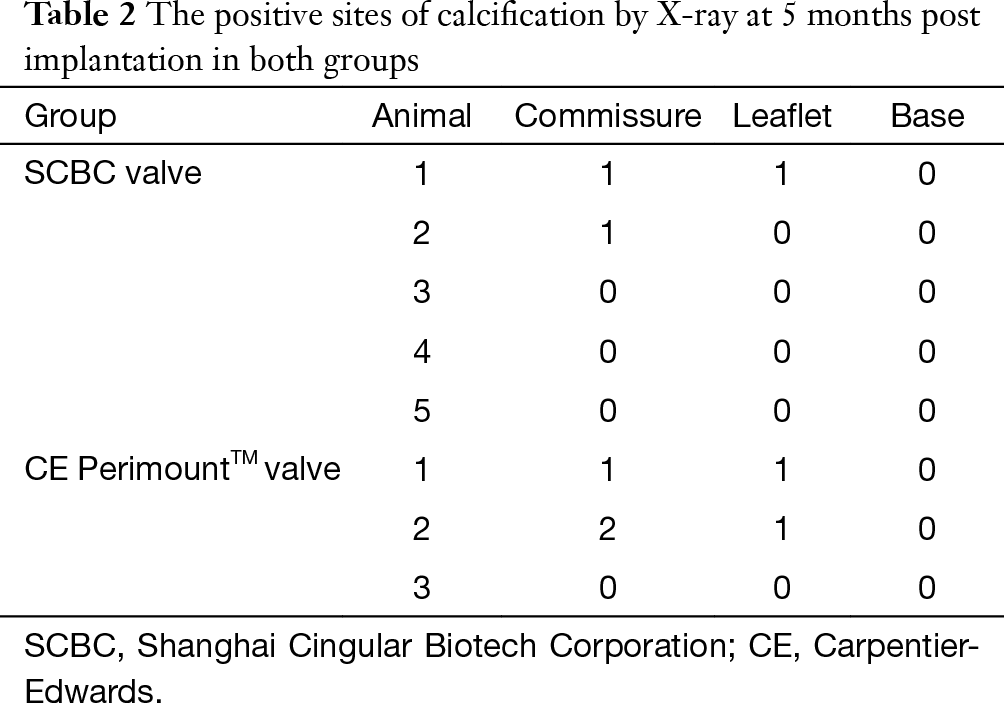 Staphylococcus auricularis was detected in one valve of the study group by microorganism culture. This sheep had some symptoms including poor appetite, malaise and runny nose after operation. Antibiotic was used and the sheep recovered 13 days post-operation.

H&E staining showed that each side of the valves was covered by fibrous layer, especially on the inflow surface. Some calcification sites were found in both groups but exhibited no significant difference (Figure 4C,D). There was no evidence of thrombus or vegetation in leaflets and other organs including brain, kidney, lung, liver and spleen by H&E staining.

All parameters that we analyzed were listed in Table 3. Hemoglobin (Hb), packed cell volume (Ct), and serum lactate dehydrogenase (LDH) were similar between the study group and the control group at all time points. We found no evidence of any red blood cell disturbance in both groups without detecting blood smear schistocytes. 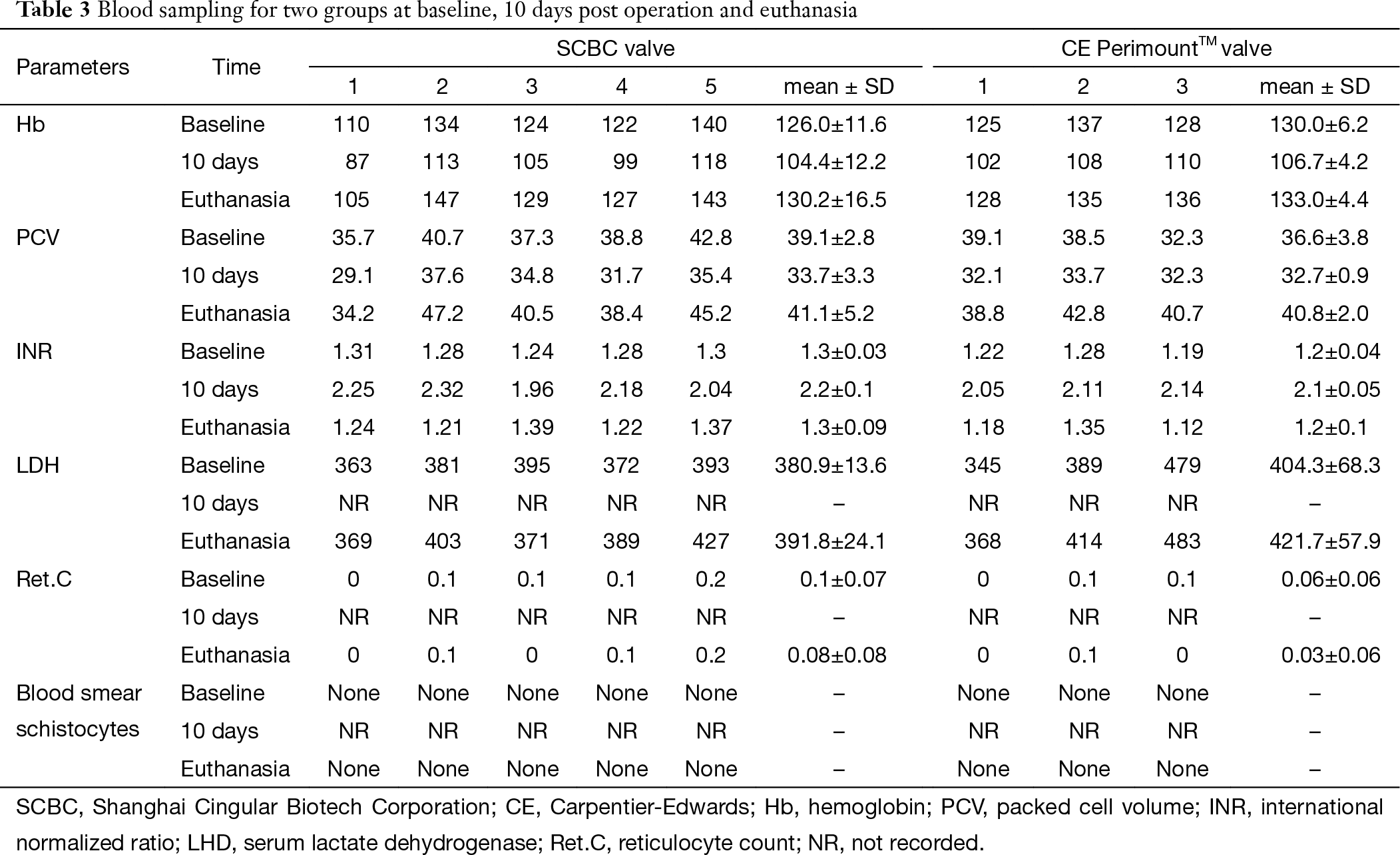 Due to the increasing aging population in China (2), etiological shift from rheumatic heart valvular disease to senile degenerative heart valvular disease, the demand for high-quality life without long-term anticoagulation treatment, and supplementary future of the development of valve-in-valve technology for solving the limited durability of bioprosthetic heart valves (12),the need for bioprosthetic valves is increasing. However, the Chinese domestic-designed/manufactured bioprosthetic valves especially bovine pericardial valve are rare and there are limited suppliers for bovine pericardial valves because the imported bovine pericardial valves have been restricted due to the government requirement of the mad cow disease free location of raw material procurement and valve assembly. The need for a suitable, alternative, and low-cost domestic-designed/manufactured bovine pericardial valve for the Chinese patients’ demand urged the emergence of the SCBC valve.

The major drawback of bioprosthesis is the occurrence of structural valve deterioration (SVD) at mid or long term, which is variable depending on the type of prosthesis (13,14). In the past 20 years, CE PerimountTM valve design offered significant advantages over all others, which was designed to minimize SVD. It features three individual leaflets with sewing tabs and tissue mounted underneath or within stent. Suture ring is designed to conform the natural annulus (mitral or aortic). The polyester (PET) commissural insert and the PET stiffener backing were fused together to prevent the tendency of commissural insert (with tissue attachment) to move down. Thus, excellent durability and low incidence of valve-related complications have been reported (8,15,16). However, above designs cause the EOAs of CE PerimountTM valve were relatively small, especially in 19 and 21 mm size aortic bioprosthetic valve, which would limit hemodynamic performance and increase the stress on the leaflets. Moreover, the size of aortic annulus of Chinese patients is relatively smaller than that of Western patients. Thus, the 19 and 21 mm size CE PerimountTM aortic valve is not the ideal choice for Chinese patients with small aortic root due to relatively small EOA.

Hemodynamic performance and calcification potential are the two major determinants for bioprosthetic heart valves. Calcification of bioprosthetic heart valve frequently leads to clinical failure of these devices. It has been known that mechanical stress stimulates calcification and that valve calcification strongly correlated with stress distribution within the valve (17-19). This emphasizes that pronounced influence of valve design on valve calcification. Although the SCBC valve is designed from the CE PerimountTM valve, it also incorporates certain new optimizations on the tissue leaflet matching, attachment and manufacturing for the purpose of reducing the leaflet dynamic stress during valve opening and closing. Such changes shall not alter the substantial equivalence of SCBC valve to the design of CE PerimountTM valve. As a result, the improvement on the opening consistency and roundness make the EOA increase by 25% over the CE PerimountTM valve of the same size in vitro test. Larger EOA will improve the hemodynamic performance and reduce the stress on the leaflets, which might increase the durability of SCBC valve in Chinese patients, especially with small aortic root.

The results of this large animal preclinical study were promising and all parameters we tested demonstrated the noninferiority of the SCBC valve compared with the CE Perimount TM valve in vivo. Further clinical trial with a large patient population and long follow-up are scheduled to confirm the safety and efficacy of the SCBC valve, which has been supported by the Shanghai Municipal Commission of Health and Family Planning and approved by the Committee for the Protection of Human Subjects at the Zhongshan Hospital, Fudan University. The SCBC valve appears to be a promising breakthrough in the effort to develop a more durable, hemodynamically efficient, and domestic-designed/manufactured economic bioprosthetic valve for Chinese patients.

In conclusion, based on the preliminary results of mid-term juvenile sheep model, our study showed that the SCBC valve is equivalent with the CE PerimountTM valve. Further clinical trial is scheduled to confirm the safety and efficacy of the SCBC valve in Chinese patients.

Conflicts of Interest: The SCBC valves were provided by the Shanghai Cingular biotech Corporation, Shanghai, China. The abstract of this paper was accepted as a poster in the annual meeting of Asian Society for Cardiovascular and Thoracic Surgery 2016 (ASCVTS).