Lung cancer is the leading cause of cancer death and the non-small cell lung cancer (NSCLC) represents 80% of all cases (1). When diagnosed, in most cases the cancer is in locally advanced or metastatic stage of the disease (stage IIIB and IV). Although targeted therapeutics for lung cancer harboring activating mutations emerged during past years, for a large proportion of patients, platinum-based doublet chemotherapy is still the established first line therapeutic option (2).

Since the chemotherapy carries the burden of wide spectrum of considerable side effects the treatment decision should balance the benefits and undesirable effects of the treatment. One of the essential factors in deciding on treatment strategy is the expected prognosis.

In standard clinical practice, different clinical or pathological factors are used as prognostic tools helping to predict the outcome of the treatment such as pathohistological subtypes of the cancer, presence of different mutations, performance status (PS), weight loss, age or comorbidities (3-5). The most recognized prognostic factor, which is advised in guidelines for lung cancer treatment is PS (6). Still, the adequate predictive factor to sift the patients who will benefit the most from the chemotherapy, due to the heterogeneity of the disease, is yet to be found.

Systemic inflammation correlated with the carcinogenesis, tumor proliferation and dissemination, brings significant contribution in prognostic assessment of solid tumors. It has been shown that systemic symptoms related to the presence of cancer such as weight loss, anorexia, cachexia and anemia are inflammatory driven (7). The mechanism of the systemic inflammation in cancer is a result of systemic cytokine excess either triggered by the tumor itself or as part of the host’s innate response against cancer (8). Activation of the coagulation system is observed in patients with various malignancies and in lung cancer as well, and is also related to cancer derived humoral factors such as interleukin-6 (IL-6), interleukin-1 (IL-1), and macrophage colony-stimulating factor (9-13).

Aim of this study was to explore predictive value of the pre-treatment C-reactive protein (CRP), fibrinogen levels and their interaction for the response to frontline chemotherapy.

This retrospective cohort study was done at University Hospital Centre Zagreb (UHC Zagreb), University Department for Lung Disease Jordanovac, Zagreb, Croatia. The study protocol was approved by UHC Zagreb Ethics committee and University of Zagreb Medical School Faculty Board, reference number 380-59-10106-13-51/13. All participants gave their written informed consent for participating in the study. The study was designed and executed in accordance with World Medical Association Declaration of Helsinki 2013 (14).

Patients of both gender, older than 40 years, diagnosed with locally advanced and metastatic NSCLC in stage IIIB and IV were eligible for the study. Exclusion criterion was brain metastasis at diagnosis. We chose a systematic, consecutive sample of patients by the order of their admission to the hospital. Patients with proven coexisting bacterial infection taking antibiotics at the time of diagnosis were excluded from the analysis.

Disease control versus progression of the disease at re-evaluation after frontline chemotherapy. Response to chemotherapy was measured by comparison of the radiographic images of the chest before the treatment and at the completion of the treatment. Radiographic imaging used in this study comprised chest radiography in the anterior-posterior and lateral view and multi-slice computer tomography (MSCT) of thorax and upper abdomen. Chest radiography was used in regular check-ups after two cycles, as per standard clinical practice, while MSCT using RECIST criteria was used for the response assessment after completed first line therapy. Patients were divided in two groups regarding the radiological response to the treatment: in one were the patients who achieved disease control and in the other ones with disease progression. Disease control comprised complete response, partial response or stable disease achieved after first line chemotherapy confirmed by radiological assessment at re-evaluation. The laboratory test results registered and analyzed comprised: hemoglobin, leukocytes, fibrinogen, and CRP level pre-treatment and at the reevaluation. All patients had Eastern Cooperative Oncology Group (ECOG) PS 0 and 1.

The level of statistical significance was set to P<0.05 and all confidence intervals (CIs) were given at 95% level. In all instances a two-tailed tests were used. The distributions were described by medians and interquartile ranges or counts and percentages. To access independent association of CRP, fibrinogen and their interaction with disease control at re-evaluation we did the multivariate (adjusted) binary logistic regression analysis. Odds ratios (OR) with their 95% CIs were given as measures of standardized effect sizes for disease control at re-evaluation. The moderating effect of fibrinogen on the association of CRP and chemotherapy outcome was analyzed by “Process”, release 2.12, Andrew F. Hayes, The Ohio State University, 2014. Fibrinogen value defining the region of statistically significant association of CRP and chemotherapy outcome was assessed by Johnson-Neyman technique as implemented in the “Process” (15). The probabilities of disease control at re-evaluation were calculated from odds as: probability = odds ratio/(1 + odds ratio). Statistical data analysis was done by R, version 3.0.1 (R Development Core Team). 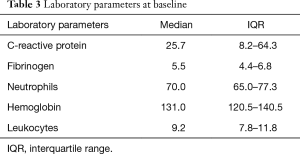 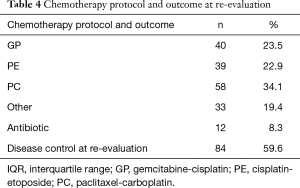 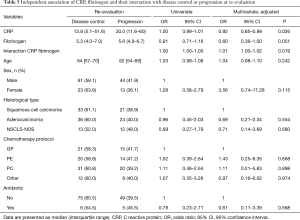 Table 5 Independent association of CRP, fibrinogen and their interaction with disease control or progression at re-evaluation
Full table 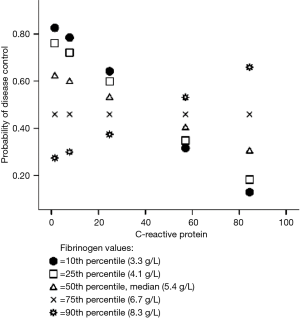 Figure 1 Probability of disease control at re-evaluation by different levels of C-reactive protein and fibrinogen; after adjustment for age, gender, histological type, chemotherapy protocol and antibiotic.

In this study we explored the predictive value of CRP in interaction with fibrinogen on the chemotherapy response and found a relationship between levels of inflammatory and coagulation markers and the response to the given first line chemotherapy.

Locally advanced and metastatic NSCLC is one of the most aggressive types of malignant disease and the leading cause of cancer deaths for both men and women.

Emerging targeted therapy for cancers harboring different mutations is appropriate for small proportion of the patients and for majority of the patients chemotherapy is still the primary therapeutic strategy with the main goals of palliation and prolonging life. There is an ongoing quest for firm prognostic and predictive factors that can help select the patients who will benefit the most from the chosen chemotherapy.

This specific cytokine pattern seems to have a prognostic effect, since high IL-6 or IL-10 serum concentrations are associated with negative prognoses in independent cancer types whereas TNFα and IL-6 are recognized as master regulators of tumor-associated inflammation and tumourigenesis (23-25). Since there is a strong connection between IL-6 level and hepatic production of CRP, CRP level could be used as indirect measure of the tumor activity (26,27).

Different inflammation markers or their combinations prior treatment were assessed for their predictive value in lung cancer. Inflammation as predictive factor, was analyzed in resectable NSCLC by Alifano et al., who found that inflammation with nutrition, and tumoral immune contexture may predict the outcome (37). Cedrés et al. found a direct association between a high neutrophil to lymphocyte ratio NLR value as marker of systemic inflammation and poor prognosis in NSCLC patients, and this was similarly observed by Botta et al. in NSCLC patients treated with bevacizumab (38,39). Kasymjanova et al. combined CRP and white blood cells (WBCs) in prognostic index and found that it can be a prediction tool for treatment and survival in metastatic NSCLC (40).

In this study predictive value of non-infectious inflammation marker CRP in interaction with fibrinogen on the chemotherapy response was analyzed. We found the relationship between lung cancer on the one side and fibrinogen and the CRP level as inflammatory and coagulation indirect markers on the other. The significant correlation of elevated pretreatment CRP level with poorer outcome after given chemotherapy was registered. There was a statistically significant difference in the pretreatment CRP level between the patients with disease control or progression at re-evaluation. The group of patients who had high CRP levels and the low fibrinogen level had poorer response to the chemotherapy with higher probability of disease progression at re-evaluation. The patients, who had low CRP levels before the start of the treatment, responded better to the frontline chemotherapy. Additionally, we found the statistically significant difference in dynamics in CRP and fibrinogen level pre- and post-treatment in these two groups of patients.

These findings are suggestive for complex interaction between cancer, non-infectious inflammation and coagulation cascade. Our study has several limitations: it was designed as retrospective study; patients in the study were with good PS only, neutrophil to leukocyte count were not included in analysis, treatment response was assessed by two radiological methods. Still, the results from our study support the value of elevated pre-treatment CRP value in prediction of the first line treatment outcome. Findings from this study contribute the growing evidence of inflammation and cancer relationship, with negative predictive impact of existing pre-treatment non-infectious inflammation on the NSCLC frontline chemotherapy response. Therefore, CRP and fibrinogen levels could be used as adjacent predictive tool in deciding on therapeutic strategy for patients with locally advanced and metastatic disease.

Ethical Statement: The study was approved by UHC Zagreb Ethics Committee and University of Zagreb Medical School Faculty Board (No. 380-59-10106-13-51/13) and written informed consent was obtained from all patients.