Idiopathic pulmonary fibrosis (IPF) is a chronic diffuse interstitial disease associated with a histologic appearance of usual interstitial pneumonia (1). As such, the most accurate imaging technique to assess the presence and the extension of the disease is high resolution computed tomography which can show characteristic patterns of involvement of the lung parenchyma (2).

From a clinical point of view, IPF is a progressive disorder leading to pulmonary arterial hypertension in almost half of the patients (3). Indeed, the occurrence of pulmonary hypertension represents a major prognostic factor of the disease (4).

While the diagnosis of pulmonary arterial hypertension can be first elicited by echocardiografic findings (5), it can also be supported by multi-detector CT angiography which can help distinguishing idiopathic forms from those secondary to either parenchymal and/or vascular disease (6). Indeed, as a further complication of sustained pulmonary arterial hypertension, pulmonary thrombosis may arise and lead to massive pulmonary embolism which represents an important cause of death in patients with IPF (7). However, while the beneficial effects of the anti-coagulant therapy have long been recognized (8), more recent studies do not show a significant advantage on the overall survival (9).

Herein, we describe a case of an 87 yrs old female who was found to have idiopathic pulmonary fibrosis complicated by acute pulmonary thrombo-embolism during the clinical and radiological investigation of a rapidly worsening dyspnea.

An 87-year-old woman was admitted to the Department of Cardioangiology of our Institution to investigate on a long-lasting dyspnea which was rapidly worsening in the past 7 days. The patient had no chest pain, no cough or other systemic symptoms. She referred an episode of pneumonia in young age and an episode of a transient ischemic attack for which she was under anti-platelet aggregation therapy. She also had arterial systemic hypertension controlled (120/80 mmHg) by medical therapy with ACE-inhibitors (Ramipril).

The chest X-ray revealed linear and air-space opacities in both lungs sparing only the right lower lobe with an associated hilar haziness and cardiomegaly (Figure 1). Chest-x ray findings were prospectively thought to be consistent with a congestive heart failure and the patient was then put on diuretic therapy with Furosemide. However, a bed-side echocardiogram showed a normal sized left ventricle with a mild reduction of the ejection fraction (45%; n.v. >55%) and a normal left atrial volume (33 mL; n.v. <34 mL). Conversely, the right ventricle appeared enlarged with an increase of both basal and middle transverse diameters which measured 37.7 mm (n.v <29) and 46.5 mm (n.v. <34), respectively. There were also pulmonary and tricuspid valvular regurgitations as assessed by Doppler with an estimated severe arterial pulmonary hypertension (74 mmHg; n.v. <25 mmHg). Further laboratory findings revealed mild hyperfibrinogenemia [519 mg/dL, n.v. <350 mg/dL)] with positive D-dimmer’s level (2.61 mg/L). At this time, a contrast-enhanced CT of the chest was requested to rule out a thrombo-embolic disease despite a “low-probability” perfusion lung scan (not shown). 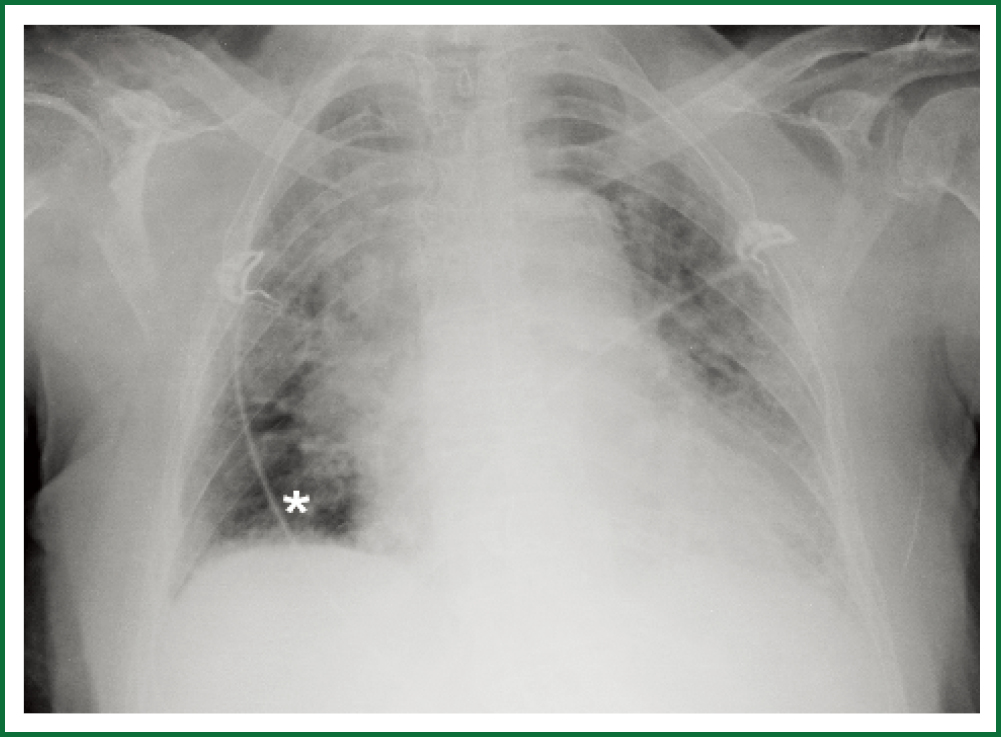 Figure 1. Antero-posterior chest-x-ray in a 87 yrs-old female with acute dyspnea. Linear and air-space opacities are respectively depicted in the whole the left lung and in the right upper lobe with associated cardiomegaly. These findings were prospectively thought to be consistent with a congestive heart failure. Retrospectively, the hyperlucency of the right lower lobe (asterisk) along with the enlargement of the inter-lobar artery represent the Westmark’s sign, highly predictive of pulmonary embolic disease.

Multi-detector CT was performed using a 64-rows scanner (Toshiba, Aquilion 64, Japan). Unenhanced acquisition (collimation 2 mm × 16 mm; section thickness 5 mm; table feed 60 mm/sec, HP =15, 120 kVp; automatic dose modulation) showed multiple reticular densities in both upper lobes as usually observed in interstitial lung disease (Figure 2). This was mostly evident on the coronal reformatted image (Figure 3A). High resolution images were then obtained using a collimation of 1 mm × 4 mm, 2 mm slice thickness, 150 Effec. mA, couch movement 10 mm, 30 cm FOV, 120 kVp. At HRCT, a diffuse architectural distortion of both central and peripheral lung interstitium was depicted with thickening of interlobular septa and intervening areas of ground-glass attenuation (Figure 2). These findings were considered consistent with the diagnosis of idiopathic pulmonary fibrosis. Although this was not even clinically suspected, it could largely explain both x-ray and echocardiographic findings. However, it did not correlate with the elevation of D-dimmer (2.61 mg/L) nor it accounted for the rapid worsening of the dyspnea.

Figure 2. Multidetector Computed Tomography performed with both conventional (A) and High Resolution (B) techniques. Axial images at the level of the aortic arch are shown. In (A) multiple reticular densities can be appreciated in both upper lobes mixed with focal areas of ground-glass attenuation. These were mostly evident in the right upper lobe and best depicted by HRCT (B) along with thickening and distortion of the inter-lobular septa. CT findings were considered consistent with Idiopathic Pulmonary Fibrosis despite the atypical upper lobe predominance.

Final diagnosis based on clinical, serological, radiological and echocardiographic findings was that of Idiopathic Pulmonary Fibrosis with superimposed acute thrombo-embolic disease and right heart failure.

Figure 3. Unenhanced and contrast-enhanced MDCT. Coronal Reformatted (A) and 20 mm thick Maximum Intensity Projection (B) images are shown. In (A) a predominantly reticular pattern with an upper lobe predominance is depicted. In (B) an embolus at the emergency of the lower branch of the right pulmonary artery is shown along with marked ectasia of both pulmonary arteries as a result of pulmonary arterial hypertension.

The radiologic evaluation of dyspnoic patients by means of chest-x-ray is often a diagnostic challenge since dyspnea may arise from either pulmonary, cardiac, hematological, muscular or neuro-psychiatric diseases (10). However, most dyspnoic patients have pulmonary disease and dyspnea is the main symptom of IPF (1).

While chest-x-ray cannot be considered the primary imaging modality to evaluate patients with IPF, it can be used to roughly assess the extension of the disease and to exclude major complications (11). In our patient, however, chest-x-ray findings were prospectively thought to be consistent with a congestive heart failure (Figure 1). As this was clearly an interpretative error, it can be partly explained by the superimposed acute thrombo-embolic disease. Retrospectively, the relative hyper-lucency of the right lung base along with the ectasia of the inter-lobar artery represent the Westermark sign which is highly predictive of pulmonary thrombo-embolic disease (12).

However, approximately 10% of patients with histologically proven IPF have a normal chest X-ray (11). In such cases, high resolution computed tomography will reveal evidence of the disease with a sensitivity of 88% as reported by Orens et al. (13). In the present case, both conventional CT (Figure 2A) and HRCT findings (Figure 2B) showed a predominant reticular pattern of involvement of lung parenchyma with scattered lobular areas of ground-glass attenuation and an upper lobe predominance. While these findings can also be observed in other interstitial lung disease such as chronic hypersensitivity pneumonia (14) and collagen vascular disease (15), the patient referred no domestic or professional exposure and further serological testing were negative.

However, while the upper lobe predominance of such a reticular pattern cannot be considered a characteristic feature of IPF (2), it was indeed found in 85% of patients with IPF vs. 31% of those with other interstitial pneumonia by Hunninghake et al. (11). Besides, the predominance of reticular densities over the areas of ground-glass attenuation (Figure 2B) does represent a characteristic finding of IPF (2) and when it is confined to both lung bases and associated with traction bronchiectasies and honeycombing can be considered diagnostic for IPF obviating the need of a lung biopsy (16).

In our patient, HRCT findings (Figure 2) could only be considered consistent with a “possible” IPF (16). As such, the diagnosis should have been supported by an open lung biopsy which was not performed because of the poor clinical conditions of the patient. Indeed, recent guidelines largely acknowledge that in clinical practice the risks of an open lung biopsy may outweigh the benefits of establishing a definite diagnosis of IPF (17). In our case, further clinical, serological and instrumental (spirometry) evaluation excluded other common causes of interstitial lung disease and the diagnosis of IPF was finally based on HRCT findings alone.

As far as the superimposed acute thromboembolic disease is concerned, this is a well-known complication of IPF accounting for up to 3% of deaths from the disease (4). While a recent population-based study claim that interstitial lung fibrosis may indeed result from a long-standing clinically occult pulmonary thromboembolism (18), there seems to be no doubt that in our patient the thromboembolic event was superimposed on a pre-existent interstitial disease which was not even clinically suspected and it was first documented by HRCT (Figure 2).

However, the diagnosis of acute pulmonary thrombo-embolism was first suggested by a bed-side echocardiography and initially ruled out by a perfusion lung scintigraphy which showed multiple segmental defects in both lungs but it was scored as a “low probability” scan in view of the chest x-ray findings (Figure 1). Indeed, it is well known that the diagnostic accuracy of this technique may be impaired in presence of diffuse parenchymal lung disease (19).

Thromboembolic disease was then clearly depicted by contrast-enhanced MDCT angiography which showed marked ectasia and inhomogeneous enhancement of the right pulmonary artery with evidence of an embolus at the emergency of its lower lobar branch as best shown by the coronal reformatted MIP image (Figure 3B). As multi-detector CT angiography is currently regarded as the “gold standard” for pulmonary embolism (20), CT findings were not further investigated and the patient was put on an anti-coagulant therapy.

Multi-detector CT angiography, however, also revealed signs of chronic pulmonary arterial hypertension resulting from IPF as both the pulmonary trunk and left pulmonary artery appeared ectasic (>25 mm) but normally patent (Figure 3B). As far as the patho-physiology of arterial pulmonary hypertension is concerned, both obstructive and restrictive lung diseases may result in alveolar hypoxia with chronic hypoxic vaso-constriction and vascular remodeling resulting in increased resistances in the pulmonary circle (21).

We have herein described a case of a Idiopathic Pulmonary Fibrosis with superimposed acute thrombo-embolic disease documented by HRCT and multi-detector CT angiography, respectively. To the best of our knowledge, such a case has not been previously reported.