Many young patients with lung cancer at the time of diagnosis are already advanced stage and therefore result in a poor prognosis (1,2). For patients harboring the epidermal growth factor receptor (EGFR) gene mutation, EGFR tyrosine kinase inhibitors (EGFR-TKIs) have been used effectively to prolong progression-free survival and overall survival (3,4). Recently, the powerful driver oncogene, fusion gene of the anaplastic lymphoma kinase (ALK) with the echinoderm microtubule-associated protein-like 4 (EML4) was identified in non-small cell lung cancer (5). Prolongation of the survival period is expected with the use of the ALK-TKI. However, few studies have analyzed the frequency of driver oncogenes in young patients with non-small cell lung cancer aged 40 or younger. Therefore, we performed gene mutation analyses in young patients with lung cancer.

We retrospectively reviewed medical records of all hospitalized patients with non-small cell lung cancer aged 40 or younger at Juntendo University Urayasu Hospital or Juntendo University Hospital from July 2004 to March 2010. We examined patient background, treatment modalities, and gene abnormalities. First, we examined EGFR mutation by performing direct sequencing for tumor biopsy specimens obtained by bronchoscope, resected tumor samples, or cell blocks of bronchoalveolar fluid or pleural effusion. When the EGFR mutation was negative, we next performed immunohistochemical analysis [using an intercalated antibody-enhanced polymer (iAEP)] and fluorescence in situ hybridization (FISH) for detection of the EML4-ALK fusion protein and gene (6), respectively. In negative cases for both EGFR mutation and EML4-ALK fusion gene, we analyzed the samples for presence of the K-ras mutation. We did not conduct re-evaluation for the EGFR gene mutation after recurrence. Survival analysis was conducted using the Kaplan-Meier method.

Table 1. Results of the comparison of postoperative QoL scales between patients with VO2max greater and lower than 15 mL/kg/min submitted to major anatomic pulmonary resections.
Full table

Six patients were smokers. Three out of these patients were heavy smokers over 20 pack pear, and had a long history of smoking. One man and 4 women were non-smokers.

Histology and stage of the disease

All of the patients had non-small cell lung cancer. Eleven patients (91.6%) were diagnosed with adenocarcinoma, while one was with histology not otherwise specified. According to the clinical TMN classification, there were 1 patient with stage IIIA, 2 with stage IIIB cancer; and 9 with stage IV.

Examination of the gene abnormalities

One case whose EGFR gene mutations were indeterminate because sample size was not enough for direct sequencing. But she seems to harbor EGFR activation mutation because she responded to gefitinib remarkably. Therefore, we considered that she harbored an EGFR mutation. Subsequently, we conducted iAEP followed by FISH analyses for 7 patients without EGFR mutation to determine EML4-ALK fusion protein and gene. Among 7 patients, 5 patients showed positive for EML4-ALK protein or gene. Analysis for the presence of K-ras mutation was performed in 2 cases that were negative for both the EGFR mutation and the EML4-ALK fusion gene. One of the cases was K-ras mutation-negative, while the other case was not clear for K-ras mutation because of inadequate sample (Figure 1). 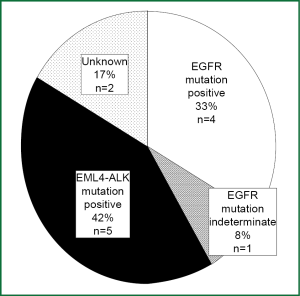 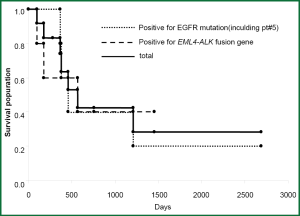 Figure 2. Survival curve of the patients.

In this study, all patients were diagnosed as non-small cell lung cancer with advanced stage. Development of metastases without symptoms or prolonged neglect of symptoms could be the reasons for this finding. Gene analysis showed that EGFR mutation was clearly identified in 4 of our 12 cases.

The results indicated that driver oncogenes were detected in 75% of our cases and that the frequency of EML4-ALK fusion gene was high in the young patients with non-small cell lung cancer. Our finding also suggests that the onset of non-small cell lung cancer in patients aged 40 or younger is more significantly related to gene abnormalities including driver oncogene mutation than to environmental factors.

In this study, we clarified that all 12 patients aged 40 and younger were non-small cell lung cancer and 9 in 12 patients were positive for the EGFR gene mutation or the EML4-ALK fusion gene. Our study revealed that ALK fusion gene affected carcinogenesis by the young patients in efficiency more than previous reports. Therefore, examination of gene abnormalities is especially important in young patients with lung cancer to provide an appropriate treatment modality.

EML4-ALK We would like to thank Dr. Takeuchi, PhD, Pathology Project for Molecular Targets, the Cancer Institute, Japanese Foundation for Cancer Research, for detecting the fusion gene by using the iAEP and FISH methods.