Despite its name, synovial sarcoma, this rare type of mesenchymal neoplasm has no relation to the synovium and may arise in any part of the body. When the mediastinum turns out to be in primary location, only few cases can be found in the literature (1,2). The size of the tumor varies a lot, just as prognosis and the survival rates. Treatment protocols described in the literature include surgery, radiation and chemotherapy, and these two last modalities can be neoadjuvant, adjuvant or both (3). Chemotherapy, by itself, tends to have a poor response, just like most forms of sarcomas; however, in this case, a complete or a near-complete pathological response was achieved. Parallel to the diagnosis, a rigorous workup should be performed to either rule out or confirm distant metastasis and establish the exact stage of the disease. Only a few cases have been reported over the last years; here is one more.

A 30-year-old man was transferred to one of the hospitals our team is in charge of. He looked really ill, wasted, and had important orthopnea, cough, hoarseness and thoracic pain. The symptoms had progressively worsened along a 3-month period. He went to some private emergency departments and received steroids plus nebulizations; after a little improvement, he was discharged. Finally, due to limiting shortness of breath, he was admitted to the hospital. Chest radiography showed a totally opaque left hemithorax with contralateral mediastinal shift (Figure 1). White blood cell count was high, with left deviation, and red blood cell count was low, with normal platelets. The chest tomography (CT) showed a large mass with extrapulmonary characteristics of approximately 20 cm in its larger diameter. It seemed to invade the upper part of the mediastinum, specially the main vessels, and it was invading the anterior chest wall. There was a critical left mainstem bronchus compression with partial upper lobe atelectasia and a small pleural effusion in the lower part of the hemithorax. The mass was heterogenous due to necrosis, and coarsely compressed and dislocated the heart to the right (Figure 2). In the physical examination, the expansion of the left hemithorax was diminished, the lung sounds were practically absent and comparing one hemithorax to the other, the left was in a higher level than the right one, due to the chest wall invasion. 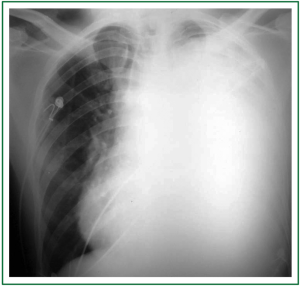 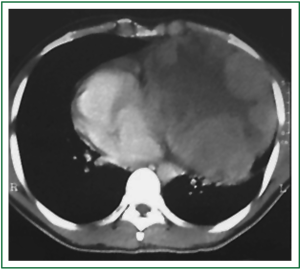 Figure 2. Chest tomography showed that the mass was heterogenous due to necrosis and coarsely compressed and dislocated the heart to the right.

As there was a high suspicion of unresectable disease associated with a poor general condition, and the patient could not lie down on account of respiratory failure, intubation and mechanical ventilation were avoided. Therefore, a parasternal incision through the third intercostal space was carried out to access the mass for diagnosis (Chamberlain procedure). The patient sat in a 60 degree angle position, under local anesthesia and light sedation. The objective was achieved; the patient was not intubated and a good amount of material was obtained.

The microscopic features of the biopsy showed spindle cells proliferation and the immunohistochemical analysis showed positivity for epithelial membrane antigen (EMA), vimentin, CD99, pan-cytokeratin and Bcl-2 oncoprotein, besides the absence of positivity for polyclonal antibody to S-100 protein, which led to the synovial sarcoma diagnosis.

After having discussed the matter with the clinical oncology group, our team decided upon neoadjuvant chemotherapy. The first cycle was performed in-hospital, the third one was complicated by febrile neutropenia that was treated with filgrastim and antibiotics, with good response. The chemotherapy protocol used was doxorubicin and ifosfamide in a total of 6 cycles, being the other four on an out-patient basis.

After the neoadjuvant therapy, the patient was well, the hoarseness and dyspnoea much better, and he had gained weight. The mass reduced its size (Figure 3), an angioresonance ruled out major vessel invasion, and a staging workup showed no distant metastasis. The patient was then submitted to a radical surgical en-block resection that involved the mass itself, together with the upper lobe of the left lung, the pleura, the endothoracic fascia and the intercostal muscles of the fourth and fifth intercostals spaces, the pericardium, the phrenic nerve and the mediastinal fat. A radical systematic mediastinal lymphadenectomy was also performed. The patient was well on the first day in the intensive care unit, went to his room on the third day, and was discharged home on the thirteenth day after a seven-day vancomycin course due to skin infection caused by a methicillin-resistant Staphylococcus aureus (MRSA). Nowadays, the patient has a normal life, no hoarseness, no physical limitation and after five years routine follow-up examinations, he has no sign of disease recurrence. 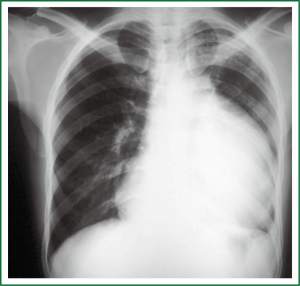 Figure 3. Chest radiography after the last cycle of chemotherapy, with dramatic reduction of the mass and mediastinal shift.

Synovial sarcomas comprise 5% to 10% of soft-tissue sarcomas and contain unique chromosomal translocations forming the SYT-SSX1 or SYT-SSX2 genes (4,5). In 1989, Witkin et al. (6) described a biphasic tumor of the mediastinum, compatible with a synovial sarcoma. They can be biphasic, monophasic, monophasic epithelial and poorly differentiated. The case described herein was a biphasic type, as it had both malignant spindle cells vimentin positive and epithelial cells keratin positive. Despite its name, a synovial sarcoma may arise in any party of the body, being the mediastinum a really rare location and when it happens, the differential diagnosis includes various chest neoplasms, such as localized fibrous tumors of the pleura, malignant mesothelioma, primary and metastatic lung neoplasms, thymoma and other rare primary parenchymal sarcomas. Until 2007, only 25 cases have been reported (7).

Definite diagnosis after the imaging studies can be obtained either by a CT guided needle biopsy (preferably with Tru-cut needle to obtain tissue fragments for immunohistochemical analysis), or by an open chest surgery or video-assisted thoracic surgery and, in a less invasive way, by Chamberlain approach, which can be performed with local anesthesia. The last approach was the one chosen, as the patient was in respiratory failure and if intubated, extubation would probably be difficult, which would worsen his already poor prognosis. Cells were positive for pan-cytokeratin, vimentin, Bcl-2, besides EMA and CD99, with negativity for S-100 protein and CD34. With this pattern, it was possible to exclude the two main differential diagnosis: solitary fibrous tumor (CD34 positive) and malignant peripheral nerve sheath tumor (focally S-100 positive) (7).

In spite of the fact that soft tissue sarcomas are believed to show poor sensitivity to chemotherapy, accumulating evidence suggests that synovial sarcoma is relatively chemosensitive and that patient outcomes in appropriately selected cases are enhanced with the use of neoadjuvant/adjuvant chemotherapy (8). The size of the tumor has a great impact in overall survival rates. Patients with localized synovial sarcomas less than 5 cm in longest diameter had a survival at 10 years of 88% compared with a 10-year survival of 38% and 8% for patients with sarcomas 5 to 10 cm and greater than 10 cm in longest diameter, respectively (9). The treatment of choice is aggressive surgical resection, which can be followed by chemotherapy alone, radiation therapy or chemoradiation. Ifosfamide and adriamycin combination may also be used for rapid symptom relief and in patients planned for curative resection of metastases (10); this was carried out with our patient, who, at the moment of the diagnosis, was in a really poor clinical condition. His response to the complete pathological treatment, with complete pathological response criteria was so dramatic that there were no viable tumor cells in the histopathological result. For this reason, although recommended by the literature (11), the patient did not receive any additional treatment.