In spite of the results from the analysis of multiinstitutional databases and the current guidelines focused on risk assessment for lung resection (1,2), the surgeon’s perception of operability may at times not coincide with a borderline or adverse outcome of preoperative work-up (3). Selected patients have been offered surgery based on the surgeon’s clinical instinct which still represents a useful adjunct to spirometric evaluation. Cardiopulmonary exercise testing is increasingly used to refine the selection of surgical candidates (3-5). Decreasing cut-off values of maxymal oxygen consumption (VO2max) have been proposed to avoid denying a surgical option to lung cancer patients (4). We investigated the possible correlation between the progressive reduction of VO2max cut-offs and postoperative survival and morbidity after lung cancer surgery.

Between January 2008 and December 2010, 119 consecutive candidates to pulmonary resection and operated on at the National Cancer Institute in Naples were subjected to VO2max assessment as part of the routine preoperative work-up for lung cancer surgery. Cycle ergometry with incremental 10 watts RAMP (Cosmed Quark CPET, Italy) adaptable to the patient’s clinical condition, was used to determine VO2max (maximal O2 value at plateau despite increasing workload), peak VO2 (maximal oxygen consumption at maximal workload), VCO2 (quantity of expired CO2 at a given time), RQ (VCO2/VO2 or respiratory quotient), VO2/HR (oxygen consumption per systole), HRR (cardiac reserve) and the anaerobic threshold.

This patient population included 80 males and 39 females with a median age of 64 years (range, 22 to 80 years). Eighty-two percent of these surgical candidates were either former or current smokers. The median body mass index (BMI) was 26 kg/m2 (range, 17 to 50 kg/m2). In particular, 66 of the patients in this series had a BMI of 25 or greater and were accordingly considered overweight or obese (5). Comorbidities included previous stroke in 4 patients (3.4%), concurrent significant peripheral vascular and coronary artery disease in 5 (4.2%) and 11 (9.2%) patients, respectively. In addition, 2 patients (1.7%) had atrial fibrillation whereas 61 (51.3%) had a history of hypertension under pharmacological treatment. Other comorbidities included diabetes in 17 patients (14.3%) and previous cancer history in 45 (37.8%). Thirty-eight patients (32%) had had chemotherapy or chemoradiotherapy as a part of their preoperative disease management. Of 86 patients undergoing lung resection for primary non small cell lung cancer, 11 (13%) had been subjected to neoadjuvant treatment. In the remaining patients, final pathology showed lung metastases (25 patients) and benign lesions (8 patients).

Major and minor postoperative morbidity were attributed according to the NCI Common Terminology Criteria for Adverse Events v.4.3 (7). In addition, to understand the relationship between morbidity and VO2max and whether a cut-off value could be predictive of postoperative complications, we arbitrarily subdivided our patient population into three groups according to the VO2max values currently reported in the literature (12 and 15 mL.kg-1.min-1) and a conservative (i.e., closer to the safest figure) intermediate value (14 mL.kg-1.min-1).

This routine use of cycloergometry was funded by the Italian National Health System (SSN) within the context of an institutional project aimed at improving risk management in oncologic surgery. Informed consent was obtained in all patients to undergo cardiopulmonary exercise testing prior to considering a surgical option.

Pearson’s correlation and t-test were used to define correlations between continuous variables. Categorical variables were compared by chi-square tests whereas Spearman’s tests were used to verify correlation. Multivariate analyses were conducted by logistic regression to define prognosticators for postoperative morbidity. In addition, Cox proportional hazard regression was conducted to evaluate survival predictors. Significance was set at P<0.05. For statistical analysis, SPSS version 19 and MedCalc version 12 softwares were used. Isometric graphs were constructed by using the JMP statistical software, version 9.

If the FEV1 less than 40% of predicted threshold is considered, no difference was noted in the severity of complications, if any, based on the 15 mL.kg-1.min-1 cutoff (P=0.21). In particular, this cutoff did not help stratify the patient population who would have developed major complications postoperatively (P=0.5).

Pearson’s correlation tests were carried out by plotting decreasing values of FEV1 and DLco against different cutoff levels of VO2max expressed both in mL.kg-1.min-1 and percentage of predicted. As expected, the categorical distinction (greater than or less than 15, 14 and 12 mL.kg-1.min-1) made it possible to separate our patient population in two risk groups according to each VO2max cut-off value. If one looks at the diagrams contained in the figure in sequence (Figure 1), the upper parts of the diagrams show an increasing “osmosis” of high risk patients in the lower risk groups as we set the VO2max cut-offs to decreasing values. Also, it clearly appears that a VO2max less than 12 mL.kg-1.min-1 (or 35% of predicted) may contribute to the refinement of the stratification by clinical instinct albeit not all patients are finally allocated to newly determined risk class groups. In fact, the patients’ data falling into the low FEV1-low DLco category (extreme sides of the scatterplots) become few and far between as the VO2max cut-off values decreased to less than 12 mL.kg-1.min-1. When isometric graphs were constructed to study the correlation between FEV1 and DLco at different absolute and percentage VO2max values, the scattered distribution of VO2max performance data was an obvious finding (Figure 2). Notably, patients with normal spirometry and/or DLco were found to have inconsistent VO2max values (Figure 2). 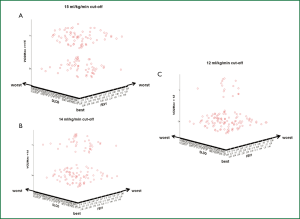 Figure 2. Isometric graphs indicating how VOmax absolute and percentage values contributed to the selection of surgical candidates. The contribution of VOmax for those patients with “abnormal” FEV and DLco (i.e., lower than 70% and 50%, respectively) is characterized by zones marked by arrows. Zones characterized by nuances of blue (VOmax

Isometric graphs indicating how VO2max absolute and percentage values contributed to the selection of surgical candidates. The contribution of VO2max for those patients with “abnormal” FEV1 and DLco (i.e., lower than 70% and 50%, respectively) is characterized by zones marked by arrows. Zones characterized by nuances of blue (VO2max <50% or 15 mL.kg-1.min-1) are present also in correspondence of “normal” FEV1 and DLco.

A 93.6% overall actuarial 5 year survival was computed with the Kaplan-Meier method. The Cox proportionate-hazards multivariate analysis demonstrated that both the percentage VO2max value greater than 35% and CTCAE >3 emerged as significant predictors of postoperative 90-day survival (Table 3). Overall, the presence of a discrepancy between absolute and percentage VO2max values was not a significant predictor of either 30 days mortality (P=0.509) or major morbidity (P=0.849).

In clinical practice, the quest for the perfect indicator of postoperative morbidity is far from over (8-11). In the meantime, the selection of surgical candidates is inspired by current guidelines which usually enable the surgeons to offer a surgical option to the majority of patients (1,2). In some circumstances, experienced surgeons tend to apply their “clinical instinct” to offer a surgical option despite potentially adverse spirometric figures (12). Concomitantly, in recent years, guidelines have been characterized by decreasing spirometric cutoff values and have introduced the concept of assessing the diffusing capacity and the cardiopulmonary performance in selected patients with borderline function (1,2,13). In this setting, cardiopulmonary exercise testing (CPET) has been extensively used and often referred to as the ultimate indicator of postoperative morbidity (14-16). Interestingly, high technology CPET has suffered the same fate as FEV1 (and DLco) in asmuch as decreasing cut-offs have been proposed to define “the unacceptable surgical risk” (2). Recently, the ESTS-ERS guidelines have identified this cut-off in 10 mL.kg-1.min-1 or 35% of the predicted VO2max value (2). Based on the review of the available literature, the limit for operability was lowered to 10 mL.kg-1.min-1 (or <35%) from the previous one (15 mL.kg-1.min-1) (2). Our series of surgical patients operated on prior to publication of these guidelines confirmed that the morbidity rates did not differ significantly by altering the VO2max cutoff from previously accepted values. However, we observed that the 4 patients who died within 30 days from surgery had median spirometric values within the range of normality. Nevertheless, VO2max values were consistently around or below the accepted minimal cutoff for operability apart from one patient. However, there was a discrepancy between VO2max absolute and percentage values in our 4 patients who died with 30 days of the operation despite the significant correlation in the rest of our patient population. This finding seems to suggest that the pathophysiology of the limitation of performance during CPET may indeed result from failure of different systems and hence entail different prognostic significance. In this setting, the mortality in our series was due to pulmonary embolism and bronchopleural fistula complicated by sepsis. Predicting such adverse events despite an optimal prophylactic and postoperative management is a difficult task. In this setting, in order not to deny a potentially curative treatment to lung cancer patients, thoracic surgeons are faced from time to time with the occasional patient who seems to escape risk management guidelines. In those circumstances, the “clinical instinct” comes into play and surgical eligibility is warranted despite borderline - or even adverse - function tests. In this setting, anthropometric measurements, location of bronchial obstruction, different protocol criteria or technologies for CPET, origin of exercise limitation (i.e., deconditioning, primary heart or lung condition, peripheral arteriopathy), nutritional profile - all may impact the accuracy of VO2max estimation (17,18).

We believe that there are limitations to this study . This is a preliminary work which needs to be supported by a currently ongoing, prospective analysis comparing patients accepted for surgery to exclude, non surgical candidates. Also, the surgical risk should be stratified between central and peripheral lesions since type of operation and induction treatment play a major role in determining major morbidity. Nevertheless, this is a retrospective analysis of prospectively entered relatively limited sized series of patients operated on directly or under the supervision of a single surgeon. By spirometric data, the majority of these patients did present “normal” functional (spirometric) values - a concept of normality which needs careful revision since it does not entail total risk avoidance. Indeed, only a minority of high risk patients do require extraordinary clinical and objective evaluation. The aim of this preliminary report was to understand whether do we always adhere to guidelines for risk assessment in these patients. Our study is a “snapshot” of a homogeneous clinical conduct in a time when several guidelines were published and none accurate enough to be fully adopted (12). Certainly, guidelines play a crucial role in contributing to the education of young surgeons in training, whereas experienced surgeons tend to still rely on clinical judgment especially when dealing with borderline patients (12).

In this setting, Ferguson and colleagues have clearly raised the issue of further investigating the etiology, accuracy and utility of surgeon risk estimates (12). The interpretation of patient-specific VO2max values is more likely to contribute to risk assessment since these values may reflect the primarily affected component among the determinants of maximal oxygen consumption (18). Hence, should this concept be confirmed by larger studies, the adoption of generalized VO2max cut-off values in risk assessment for lung surgery may in the future become a contradiction in terms. Risk scores will have to be revised taking into account the primum movens of exercise limitation of individualized, patient-specific, VO2max cut-off values.