Esophageal cancer is the fourth most common cause of cancer death, while the mortality rate was 15.21 per 10,000 (11.19% of the total cancer death) according to the data from The Third National Causes of Death Sampling Survey [2004-2005] (1). Esophageal cancer mortality rates have decreased somewhat over the past three decades with the improvement of its socio-economic status and lifestyle (1). However, esophageal cancer remains prevalent in rural areas and in males (2). Accurate population-based statistics of esophageal cancer are the basis for policy makers and researchers for effective cancer prevention and control.

National Central Cancer Registry (NCCR) of China was the governmental authority affiliated to Bureau of Disease Control, Ministry of Health, in charge of cancer data collection, evaluation and publication from population-based cancer registries nationwide. All new cancer cases diagnosed in 2009 were reported to cancer registries from all hospitals, community health centers and the other departments, including centers of township medical insurance and the New-type Rural Cooperative Medical System. The death record database was linked and matched with cancer registration database for identifying cancer deaths and supplementing missed cases.

Until June 1st, 2012, there were 104 cancer registries (46 cities and 58 counties) from 27 provinces reporting cancer registration data to NCCR. The overall population coverage was 109,476,347, accounting for 8.20% of the whole population. The cancer registries coded cancer site and histology by the International Classification of Diseases (ICD) for Oncology, third edition and ICD-10. Invasive cases of esophageal cancer (C15) were retrieved from the overall cancer database and analyzed. Demographic information was provided by national statistics bureau.

Based on “Guideline of Chinese Cancer Registration” and the standard of data inclusion in “Cancer Incidence in Five Continents Volume IX”, cancer registration data were evaluated by the quality indicators of proportion of morphological verification (MV%), percentage of cancer cases identified with death certification only (DCO%) and mortality to incidence ratio (M/I) (3-5). Generally, data with DCO% less than 20%, an overall MV% of more than 55%, and M/I between 0.55-0.95 were considered acceptable.

Crude incidence and mortality rates of esophageal cancer were calculated stratified by sex, area and for 19 age groups (0-, 1-4, 5-9, … 80-84, 85+ years). China sensus in 1982 and Segi’s world population were applied for age standardized rates. The cumulative risk of developing or dying from cancer before 75 years (in the absence of competing causes of death) was calculated and presented as a percentage. Software including MS-FoxPro, MS-Excel, IARCcrgTools issued by IARC and IACR were used for data checkup. SAS software was used to calculate the incidence and mortality rates.

Table 2. Esophagus incidence by sex and area in registration areas in 2009.
Full table 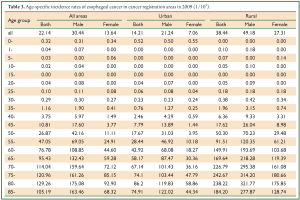 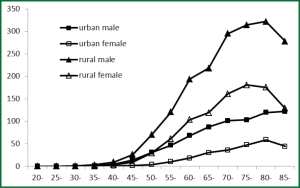 The mortality trend for esophageal cancer in different age groups was similar to the trend of incidence. Both for males and females, in urban and in rural, the mortality reached peak for subjects of 80-84 years old. (Table 5, Figure 2). 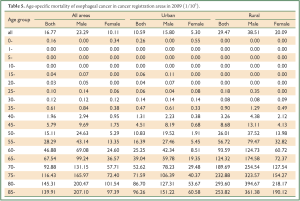 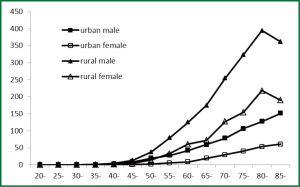 Esophageal cancer has very poor prognosis because most tumors are asymptomatic until at advanced stage which are un-resectable with the intention of curing the patient. Promising results have been reported that screening with use of endoscopy may improve prognosis from esophageal cancer (21). It is expected that through primary and secondary prevention, the prevalence of the disease may be controlled in the future.

NCCR is the authoritative source of information on cancer incidence and mortality in China. NCCR collects and publishes these statistics from population-based registries. The population coverage is increasing year by year. Since 2009, the ministry of health built up more cancer registries and provided specific funding to support the development of cancer surveillance. Until the end of 2012, there were 222 cancer registries around China, covering 14% of the whole population. Notably, the new built-up cancer registries need at least 5-year time to ensure data quality and reliability.

The data provided here are the most up-to-date data on incidence and mortality, reflecting the only available population-based information on esophageal cancer of China. In our study, urban population coverage took great part in the overall population, therefore, the representativeness of the data needs to be explained with caution (22). Chinese government is still making effort to improve the quality of the cancer registration data especially in rural areas. The accuracy and representativeness of the population-based cancer statistics would be better in the future.

All staff from local cancer registries that have made a great contribution for providing their cancer registration database was acknowledged.