Congenital diseases of the lung and mediastinum are increasingly being diagnosed in adults. Careful radiological evaluation of the lesions and knowledge of potential complications are important to provide adequate treatment (1). Anomalous arteries and veins, communications with surrounding mediastinal structures, coexisting congenital anomalies and infections may lead to unforeseen complications following surgery (2).

Here, we report a case of giant bronchogenic cyst (BC) associated with pericardial defect found during surgery. We discuss the cause of these congenital anomalies and review the literature, focusing on potential surgical complications.

A 69-year-old woman presented with dyspnea on excursion. Computed tomography (CT) revealed a mediastinal tumor and she was referred to the department of thoracic surgery.

She had a past history of hypertension and hyperlipidemia. She received operation for left breast cancer at the age of 60 and myoma of the uterus at 35.

Physical examination revealed no abnormalities, blood pressure was 116/73 mmHg, and heart rate was 80 beats per minute, SpO2 99%. Her heart rate rose to 124 beats per minute on excursion. ECG was normal, but echocardiography revealed a mild left ventricular diastolic dysfunction and a mass adjacent to the left atrium. Chest radiography showed a mass overlapping the cardiac silhouette (Figure 1A). Chest multiple detector computed tomography (MDCT) demonstrated a large cystic mass 60 mm in diameter, which was located beneath the carina. It compressed the right superior pulmonary vein and left atrium. It also lay adjacent to the right pulmonary artery and the left superior pulmonary vein (Figure 1B). 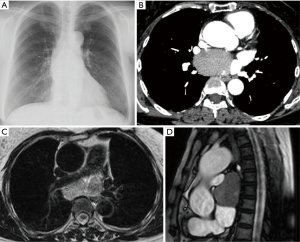 Figure 1 Findings on chest X-ray, computed tomography (CT) and MRI. (A) A mass overlapping the cardiac silhouette was detected on chest X-ray; (B) a large cystic mass measuring 60 mm was detected on MDCT, the mass compressed the left atrium and the right superior pulmonary vein, it also lay adjacent to the right pulmonary artery and the left superior pulmonary vein; (C) a high intensity in T2-weighted image; (D) the mass had an intermediate intensity on cine MRI. MDCT, multiple detector computed tomography; MRI, magnetic resonance imaging.

The mass showed intermediate signal on sagittal-axis views of cine magnetic resonance imaging (MRI) (Figure 1C). And the mass showed high intensity in T1-weighted image, and mixed intensity in T2-weighted image on chest MRI (Figure 1D). Surgery was performed via a right posterolateral thoracotomy. The tumor lay between the superior and inferior pulmonary vein (Figure 2A). It was also loosely adhered to the pulmonary artery and right main bronchus. The tumor was dissected from its adjacent structures. Following resection, a partial defect in the pericardium was found and the left ventricle could be observed (Figure 2B,C). The tumor was 72 mm in length and contained thick yellowish fluid (Figure 2D). Pathological diagnosis was BC. 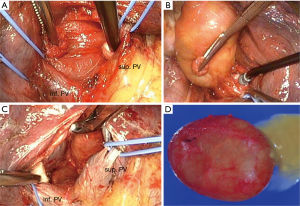 Congenital pericardial defect is a rare anomaly consisting of a partial or total defect in the pericardium. It was found in one case among 14,000 autopsies performed in a single institution (3). Most cases are found by chance at autopsies and thoracic surgeries. In a research by Ellis et al., 73% were males, and were left sided in most cases. Only three among 99 cases had right sided defects (4).

During the 6th week of gestation, the pericardio-pleural canal fuses and the communication between the pleural cavity and the pericardium closes. The patency of the canal is said to be the cause of defects in the pericardium. According to a theory by Perna, premature atrophy of the duct of Cuvier results in deficient blood supply and incomplete development of the pleuro-pericardial membrane (5,6).

In 1945, Rusby et al. (5) reported a case of BC associated with left sided partial pericardial defect. The association between these two anomalies may also be due to the atrophy of the duct of Cuvier. The lung buds develop from the foregut in the 5th-week embryo. As the lung develops, structures such as the duct of Cuvier, prevents its expansion to the mesial side. Premature atrophy of the duct is theorized to enable the development of abnormal lung buds and additional lobes.

In a search of the English literature, we found 25 cases of pericardial defects associated with developmental abnormalities arising from the foregut, such as BCs and pulmonary sequestrations (5,7-21). There were ten cases of mediastinal BCs among which one had a partial right-sided defect in the pericardium as seen in our case (9). Many of the cases had other malformations in the lung and vessels.

Though pericardial defects are usually asymptomatic, it is sometimes associated with increased mobility and stress on anchoring structures of the heart, resulting in local inflammation and chest pain. There are also occasional reports of sudden death due to herniation of the heart (4,22).

We performed a review of the Japanese literature between 1963 to April 2013. There were 28 reports on pericardial defects found during thoracic surgery. Mean age was 33.5 years and 24 were male. Nine had pneumothorax, four had cystic lung disease, three had lung cancer and three had BCs. Sixteen had complete left sided defects, 11 had partial defects on the left and 1 was right sided. Eight developed complications related to surgery, among which, two had cardiac arrest, two had arrhythmia, and two developed phrenic nerve palsy (Table 1) (23-30). Reconstruction of the pericardium was performed in six patients. All had left sided deficiencies, among which two had a partial defect of around 5 cm in diameter. In most of the cases, reconstruction was performed to prevent strangulation from partial defects or because of a major decrease in lung volume, which threatened to lead to large displacement of the heart (Table 2) (25,26,31-34).

In conclusion, congenital pericardial defects are often found in association with other thoracic anomalies. Techniques to prevent arrhythmias and sudden death should be considered in some cases when large amounts of adjacent structures are removed during surgery.