The fundamental unit in a multicellular organism is the single cell. To understand how the tissues develop and function, it is very important to understand the molecular and functional variation in each cell. Single cell transcription reflects single cell protein expression and single cell function (1-3), but this information has been inaccessible thus far due to the lack of approaches to consistently capture single cells and efficiently amplify their RNA transcripts. The development of microfluidic- (4-6) and droplet-based (7-9) isolation methods has greatly improved our ability to study single cells. Along this line, the creation of research tools such as CEL-seq, STRT-seq and SMART-seq2 (10,11) has significantly improved the transcriptional amplification efficiency genome-wide. These advances have now resulted in the acquisition of single cell transcriptional expression data in multiple different species and tissues for various purposes.

In parallel with the development of single cell transcriptional and epigenetic technology, there have been great progresses in single cell genomics, proteomics, and metabolomics measurements as well. These developments are outside of the scope of this review and we encourage interested readers to seek additional information on these topics in other publications (16-18).

Single cell gene expression analysis has been applied to studies in different tissues to reveal their cellular heterogeneity, expression of novel markers, presence of rare cell populations, and anatomical locations (19-22) (Figure 1). Here, we review systematically the recent progresses in this area of research for each of these purposes. 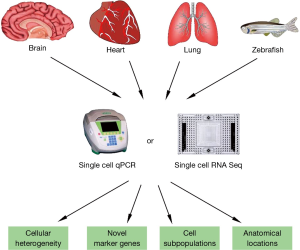 The quantification of gene expression in single cells has significantly improved our understanding of cellular heterogeneity in different organ systems. For example, a malignant tumor is well known to be composed of multiple different cell types that interact in a dynamic fashion. Using single cell qPCR, a list of lineage genes expressed in epithelial cells of normal human colon vs. colon cancer can be determined (22). Furthermore, this study also showed that in colon cancer tissues, the other non-epithelial cell types were transcriptionally similar to their counterpart in normal colon tissue. Using single cell RNA sequencing, another study analyzed five types of primary glioblastomas and found significant cellular heterogeneity and diverse transcriptional regulatory programs. These new regulatory programs were shown to be important in glioblastoma biology and help to improve patient prognosis and treatment (25). The cellular heterogeneity of induced pluripotent stem cell (iPSC) and embryonic stem cell (ESC) populations have been systematically compared using single cell qPCR recently (26). The study found that iPSCs are remarkably more heterogeneous than ESCs, and iPSC displayed slower growth kinetics and impaired differentiation compared with ESCs, implicating iPSC occupy a less stable pluripotent state (26).

With single cell RNA sequencing data, investigators have been able to determine the anatomical location of single cells from various different contexts. By profiling 96 otic lineage and signal pathway genes from the otocyst of the inner ear, Heller and colleagues examined the use of these data to reconstruct the physical location of each single cell. Given the simple spherical structure of the otocyst these investigators applied a PCA-based model of this sphere in 3D using the qPCR data. In this model, the spherical structure was divided into eight quadrants along the three major axes that generate six defined hemispheres. Each of the single cells was projected onto the surface of the sphere based on its pattern of gene expression (28). In another study, the anatomical location of each embryonic zebrafish cell was determined by integrating single cell RNA-seq data with previously known in situ hybridization data. A bioinformatics algorithm named Seurat was developed in this study to identify the most differentially expressed genes among single cells and infer the spatial position of each cell. The authors further validated the anatomical mapping accuracy using different approaches to independently confirm that the Seurat method can accurately map the location of a small collection of cells as well as different rare cell populations (19). Furthermore, the anatomical location of single cells in the brain of a marine annelid Platynereis dumerilii was recently mapped by combining single cell RNA-seq data with positional gene expression profiles. These authors reported a mapping accuracy as high as 81% (29). 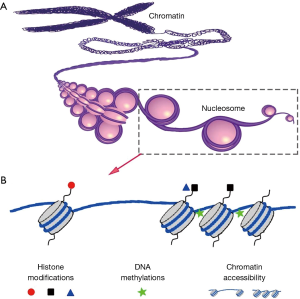 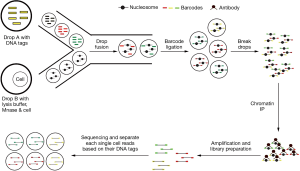 Figure 3 The workflow of single cell Drop-ChIP. Single cells were lysed and their chromatin was fragmented with micrococcal nuclease (MNase) in each drops. Drops with fragmented chromatin were then merged with the drops carrying different DNA barcode, and these DNA barcodes were ligated to the chromatin fragments from each drop to index them to the original cells. The merged drops were combined and the pool of bar-coded chromatin was then used for immunoprecipitation by various histone modification-specific antibodies. The purified DNA fragments were then further amplified and used for library preparation and sequencing. Finally, based on the barcode information, sequencing reads were partitioned to generate each single cell chromatin profiles.

The workflow of single cell Drop-ChIP. Single cells were lysed and their chromatin was fragmented with micrococcal nuclease (MNase) in each drops. Drops with fragmented chromatin were then merged with the drops carrying different DNA barcode, and these DNA barcodes were ligated to the chromatin fragments from each drop to index them to the original cells. The merged drops were combined and the pool of bar-coded chromatin was then used for immunoprecipitation by various histone modification-specific antibodies. The purified DNA fragments were then further amplified and used for library preparation and sequencing. Finally, based on the barcode information, sequencing reads were partitioned to generate each single cell chromatin profiles.

The binding of transcription factors and epigenetic modifiers to genomic DNA requires the movement of nucleosome to increase chromatin accessibility. Hence, nucleosome positioning plays a critical role in regulating the availability of transcription factors and RNA polymerase to their target gene loci and genes expression. To analyze the position of nucleosomes in single cells, Small et al. developed a novel technique that takes advantage of the ability of nucleosome to protect DNA from GpC methylation to identify the nucleosome position at the promoter region of the PHO5 locus (35). These investigators found significant cell-to-cell variation in nucleosome positions and nucleosome positioning shifts correlates with gene expression changes. Furthermore, through combining a microfluidics platform with assay for transposase-accessible chromatin using sequencing (ATAC-seq), Greenleaf, Chang, and colleagues reported the development of single cell ATAC-seq (scATAC-seq) and used it to analyze the genome-wide chromatin accessibility in multiple types of single cells. Using scATAC-seq, significant cell-to-cell accessibility variance was observed and the variation was found to associate with specific cis-elements and trans-factors (36). Additionally, they found some trans-factors such as CTCF can buffer variability, but some other trans-factors such as P300 can amplify variability (36). Meanwhile, Shendure and colleagues used a similar approach to measure the chromatin accessibility in thousands of single cells, and they successfully identified functionally relevant differences in accessibility between cell types and between subtypes within an apparently homogeneous cell population (37). Recently, a single cell DNase sequencing (scDNase-seq) method was reported to detect genome-wide DNase hypersensitive sites (DHSs) (38). DHSs generally correlate with the chromatin states of important transcriptional regulatory elements. With scDNASE-seq, the chromatin regions with multiple active histone modifications were found to display constitutive DHSs but the ones with fewer histone modifications exhibit high variation of DHSs among single cells (38). The cell-to-cell variation in DHSs can also be used to predict gene expression levels.

Clinical diagnosis and therapies have also greatly benefited from the advance of single cell techniques. Rare circulating tumor cells (CTCs) in patients’ blood can be detected by single cell genomic sequencing analysis to provide cancer prognosis, monitor disease progression, and evaluate therapy efficiency (39). Given that cancer tissue is quite complex and cancer cells respond heterogeneously to drug treatment (40), single cell RNA-seq has been applied to investigate the cellular response of metastatic human breast cancer cells to paclitaxel treatment. This study showed that drug-tolerant cells expressed specific RNA variants involved in microtubule organization and cell surface signaling (41). Single cell epigenetics can also provide valuable insights in understanding disease mechanisms and providing clues for clinical therapies. For example, ATAC-seq has been optimized to assay the T cells and B cells of patients on a clinical timescale, and the generated information can be used to assemble a personalized regulatory network for disease prognosis (42). Additionally, scDNase-seq has been applied to normal and thyroid cancer samples to successfully identify single mutation within a DHS site that disrupted p53 protein binding resulting in down-regulated target gene TXNL1 expression (38).

Single cell transcriptional and epigenetic profiling is a powerful method to dissect tissue complexity and elucidate novel markers and cell populations. It has also shown promise in analyzing clinical samples with rare cell number. Single cell genome-wide transcriptional profiling is becoming a well-established method for determination of the anatomical location of single cells from various developmental and disease contexts. In the future, we envision an increased ability to combine genome-wide single cell gene expression profiling with histological information to determine the influence of cell-cell interaction on transcription. Furthermore, we predict that single cell epigenetics profiling will become more sophisticated and sensitive to help further delineate the mechanisms that regulate gene expression at a single cell level. Ultimately, the combination of single cell expression and epigenetic profiling will prove to be extremely valuable for further understanding of the natural variation of gene expression and their regulation.

Funding: This work was supported by a post-doctoral fellowship from the Child Health Research Institute at Stanford (to G Li), by the German Heart Foundation (to E Dzilic), and by the NIH Progenitor Cell Biology Consortium (U01 HL099776), the NIH Director’s Pioneer Award (DP1 LM012179-01), and the Endowed Faculty Scholar Award of Lucile Packard Foundation for Children and Child Health Research Institute at Stanford (to SM Wu).