Systemic therapy targeting vascular endothelial growth factor (VEGF) and its receptors is effective for a number of solid tumors, including non-small cell lung cancer (NSCLC) (1-3). Bevacizumab is a recombinant humanized monoclonal antibody targeting VEGF (4). Among the bevacizumab-associated adverse events, hypertension, proteinuria, bleeding, and venous thromboembolism are common (4). However, cardiotoxicity has rarely been reported as a serious, sometimes fatal adverse event of bevacizumab. In fact, 0.8–3.8% of patients have been reported to experience grade 3 or 4 bevacizumab-associated cardiotoxicity in phase 3 studies of bevacizumab-containing regimens in metastatic breast cancer (5-9). Recently, the number of reports concerning cardiovascular toxicity of anti-angiogenetic drugs has been increasing. However, it remains unclear whether bevacizumab could also cause cardiotoxicity in patients with NSCLC because the variety of concomitant drugs administered and the dose or duration of treatment differ among patients (10). Here, we report the case of a patient with NSCLC who developed bevacizumab-containing therapy related cardiotoxicity with left ventricular dysfunction, and recovered after discontinuation of bevacizumab.

The patient was a 55-year-old man with stage IV lung adenocarcinoma cT2aN0M1a. Chest computed tomography (CT) revealed a mass in the left lower lobe and multiple nodules in both lungs. His Eastern Cooperative Oncology Group performance status score was 1. He had no past history of heart disease or coronary risk factors, and ejection fraction was 66% without asynergy evaluated by cardiac ultrasonography before treatment.

Four cycles of combination chemotherapy comprising pemetrexed and cisplatin (3 weeks apart) were administered as the first-line therapy, followed by maintenance chemotherapy with pemetrexed; however, disease progression with an increase in the number of multiple nodules was observed after the third course of maintenance therapy. For the second-line therapy, four cycles of combination chemotherapy consisting of paclitaxel, carboplatin, and bevacizumab (3 weeks apart) were administered as the patients requested. The chemotherapy was well tolerated with no obvious gastroenterological adverse effects. However, three days after the third cycle administration, grade 2 hypertension was noted. Azilsartan at 40 mg/day was administered, and blood pressure was adequately controlled. Electrocardiography (ECG) at the time of initiation of the fourth cycle of combination therapy showed asymptomatic sinus tachycardia with a heart rate of 106 beats per minute (bpm), although both normal sinus rhythm had been detected just before the initiation of the third cycle. Physical examination and laboratory findings did not show the dehydration nor abnormal production of thyroid hormones.

On the 5th day of the fourth cycle of combination therapy, he underwent a bout of syncope with hypotension. Neither heart murmur nor crackles were noted. Lower leg edema was not observed. ECG revealed atrial fibrillation, showing a heart rate of 90–100 bpm without ST-T wave abnormalities. Cardiac ultrasonography showed the depression of left ventricular ejection fraction (45%). Brain natriuretic peptide levels were elevated from 13.9 to 116.5 pg/mL (normal, <20 pg/mL) (Table 1). Bisoprolol fumarate at 2.5 mg/day was initiated for atrial fibrillation, and the conversion to sinus rhythm was detected by ECG 4 days after the syncope without electronic cardioversion. At that time, no improvement in the ejection fraction was confirmed by cardiac ultrasonography. Cardiac magnetic resonance imaging demonstrated no evidence of ischemic heart disease or coronary stenosis. Tachycardia-induced cardiomyopathy, which seemed the other differential diagnosis, was thought to be unrelated owing to the comparatively low heart rate and paroxysmal atrial fibrillation. On the basis of the clinical manifestations and physiological findings, grade 3 left ventricular systolic dysfunction was diagnosed. Cardiotoxicity possibly related to bevacizumab was suspected. As a result, bevacizumab maintenance therapy was discontinued, although the chemotherapy achieved stable disease status based on the Response Evaluation Criteria in Solid Tumors. Two months after withdrawing bevacizumab-containing chemotherapy, left ventricular ejection fraction improved to 62% (Table 1). Atrial fibrillation has not recurred since then.

To the best of our knowledge, this is the first report on a patient who underwent cardiogenic syncope possibly due to bevacizumab-containing chemotherapy-associated cardiotoxicity. Bevacizumab rarely causes cardiotoxicity, which is a potentially fatal adverse event. One of the 138 patients who received carboplatin, paclitaxel, and bevacizumab died of cardiac insufficiency in a phase 3 trial of NSCLC (11).

Bevacizumab could lead cardiotoxicity in patients with NSCLC. To date, there have been some reported cases of bevacizumab-associated cardiotoxicity in patients with the other cancers as shown in Table 2 (4,6,8,12-15). The relative risk of heart failure in bevacizumab-treated patients with metastatic breast cancer was reported to be 4.74 (4). There are several differences in the treatment of breast cancer and NSCLC patients; one such difference is the dose and interval of bevacizumab, which is 2.5–5 mg/kg/week for breast cancer patients, and 15 mg/kg/3 weeks for NSCLC patients. However, no significant difference in the incidence rates of chronic heart failure between high and low doses has been reported (4). Another difference in the treatment of breast cancer and NSCLC patients is that the combination drugs accompanied along with bevacizumab. In breast cancer patients, pretreatment with anthracyclines and/or trastuzumab could cause damage to myocardial cells (10,16) and the effect of concomitant cardiotoxic chemotherapy should be noted. In fact, paclitaxel has a chronotropic effect on the Purkinje system and pro-arrhythmogenic cytotoxicity (17-19). It may lead to bradycardia (17-19). In the phase 3 study of paclitaxel with or without bevacizumab administration in metastatic breast cancer, heart failure was more frequent when combination therapy was used (7,17); therefore, bevacizumab is assumed to contribute to the development of cardiotoxicity in our case. 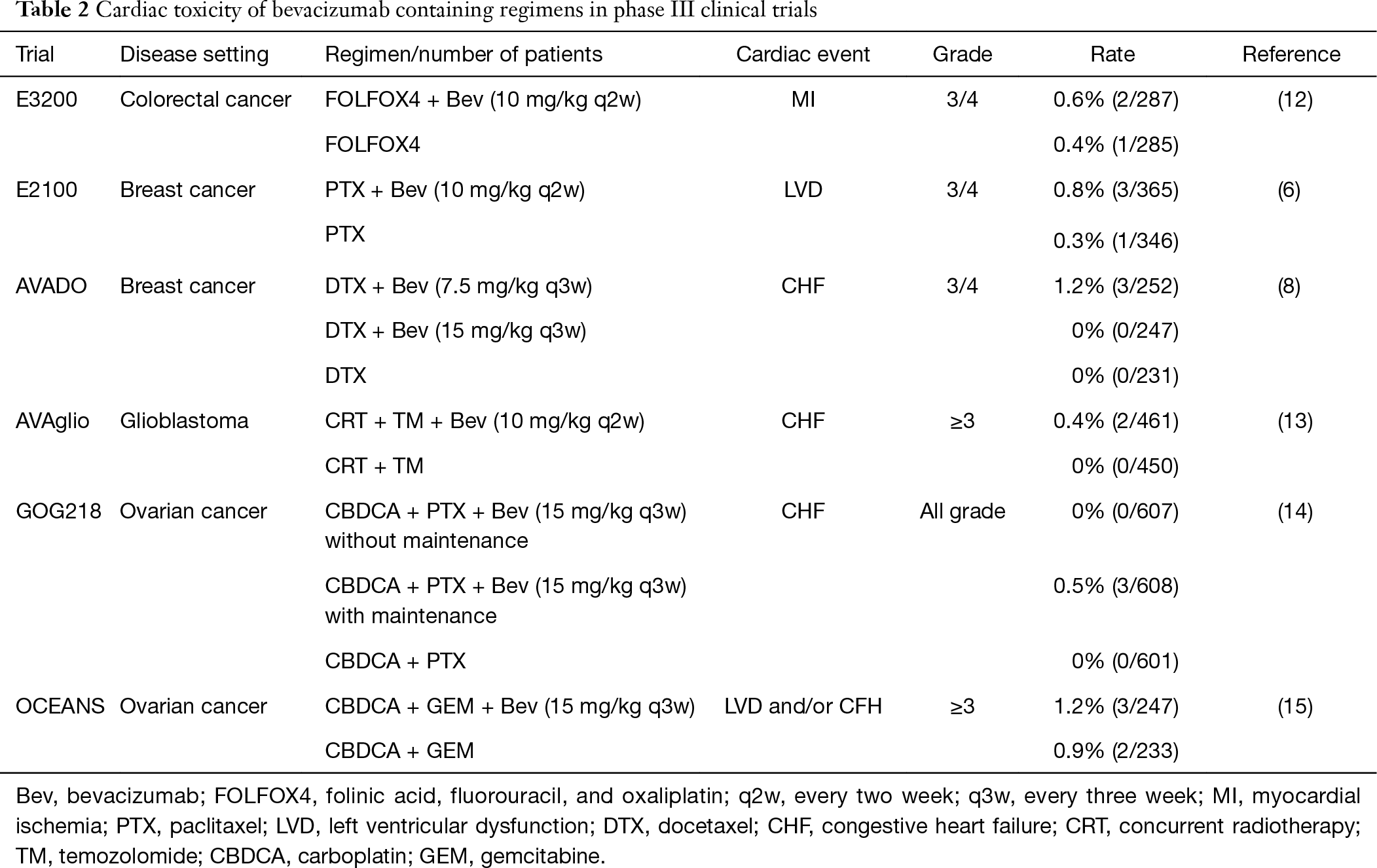 Bevacizumab-associated cardiotoxicity may be reversible after the cessation of bevacizumab. It was thought to be due to two following mechanisms: First, bevacizumab-associated cardiotoxicity results from blocking the role of VEGF, which is thought to have important roles in cardiac physiology, coordinated tissue growth, and angiogenesis in the heart (4). In a mouse model where VEGF trap is inducing, myocardial capillary density decreases, leading to myocardial hypoxia and decreasing contractile function (19-22). The anti-VEGF effect of bevacizumab may decrease endothelial cell renewal capacity, expose pro-coagulant to subendothelial tissue, and decrease the production of nitrous oxide (23), resulting in interference with the development of collateral circulation, a compensatory mechanism for obstructive arterial disease (24). However, this effect may lead to stunned myocardium without overt permanent damage, which can be recovered after the discontinuation of bevacizumab (16,25). Similar to our case, left ventricular dysfunction improved after the cessation of bevacizumab in some patients (16,25). Second, left ventricular dysfunction may also partly result from hypertension (26,27), rates of which were reported to be 4.8–11% in the randomized trials of bevacizumab in NSCLC (28). The treatment of hypertension would recover the left ventricular dysfunction.

More recently, there have been some reports on the efficacy of adding bevacizumab to traditional regimens and re-challenging beyond the progression of the disease (29-32). However, few trials incorporated the monitoring of regular left ventricular ejection fraction throughout the study, even though half of bevacizumab-associated cardiotoxicity is asymptomatic (4); therefore, its frequency may be underestimated. Taking these reports into consideration, we should pay more attention to adverse events concerning cardiotoxicity during bevacizumab-containing chemotherapy. To date, there are no specific guidelines for the management of cardiotoxicity in patients receiving bevacizumab (33). Active management of hypertension should be performed with angiotensin-converting enzyme inhibitors to prevent left ventricular dysfunction (21,33). In addition, beta blockers could be introduced for the management of heart failure (21).

In conclusion, the present case indicates that bevacizumab could cause left ventricular dysfunction in NSCLC patients evaluated by the follow-up transthoracic cardiac ultrasonography. The balance of the anti-cancer efficacy and the cardiotoxicity of bevacizumab should be taken into consideration. Physicians should monitor the left ventricular ejection fraction during administration of bevacizumab-containing chemotherapy to detect the cardiotoxicity related to bevacizumab earlier. An accumulation of case reports is needed to confirm our results.