The incidence of paravalvular leak (PVL), defined as a regurgitant jet between the prosthetic sewing ring and native tissues on transoesophageal echocardiography (TEE), occurs in 5–32% of patients following mitral valve replacement (MVR) (1,2). Most cases of PVL remain clinically silent, but patients presenting with persistent symptoms of congestive cardiac failure, haemolytic anaemia, or a combination of both may benefit from surgical repair. The majority of PVLs occur during the first postoperative year (2). It is extremely rare for patients to develop PVL decades after MVR (1). Previous reports have cited the longest period between MVR and the diagnosis of a new PVL to be 27 years (3). This retrospective review was conducted at our tertiary center to study the outcomes of 6 patients who underwent reoperative surgery for mitral PVLs occurring more than 10 years after the latest MVR.

All patients had initially undergone MVR with mechanical prostheses for rheumatic mitral stenosis between 1979 and 1998. Patient characteristics are summarized in Table 1. Three patients (50%) had undergone at least 2 previous MVRs. The median time interval between the most recent MVR and initial echocardiographic diagnosis of PVL was 16.5 years (range: 11 to 29 years). 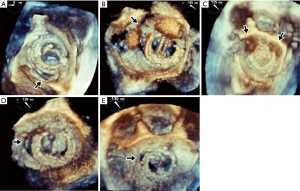 Two patients had undergone unsuccessful percutaneous closure of PVL, which failed due to either significant residual regurgitation or the closure device interfering with the existing mitral prosthesis. One patient who received 2 occluder devices required emergency surgery due to cardiogenic shock, resulting from a closure device being caught between the leaflets of the mitral prosthesis. Five patients with discrete PVLs in the presence of a calcified mitral annulus underwent direct suture repair without removal of the existing mitral prosthesis. One patient with multiple PVLs at various sites along the sewing ring underwent MVR after extirpation of the previous prosthetic valve. Concomitant procedures were performed in 4 patients (Table 1). The median aortic cross-clamp and cardiopulmonary bypass times were 50 minutes (range, 42 to 119 minutes) and 99 minutes (range, 72 to 196 minutes), respectively.

There were no in-hospital mortalities. Postoperative complications are listed in Table 1. No patients suffered from postoperative stroke, myocardial infarction or required insertion of a permanent pacemaker. Upon discharge from hospital, five patients (83.3%) had no residual PVL and 1 patient (16.7%) had mild residual PVL.

All patients were reviewed at our institution during scheduled clinic consultations. The median follow up period was 3.3 years (range: 1.9 to 4.8 years). There were no late mortalities. Five patients (83.3%) were in NYHA class I and had no recurrence of haemolytic anaemia. Four patients (66.7%) had no recurrence of PVL and two patients (33.3%) had mild PVL during follow-up echocardiographic assessment (Table 1). In the patient who underwent salvage surgery following failed transcatheter repair, haemolysis persisted despite surgical correction, due to a turbulent jet flowing through a mild residual PVL. The patient opted for conservative management and declined any further high-risk PVL closure.

Hwang and associates (2) reported that 74% of PVLs occur during the first postoperative year. It is extremely rare for PVLs to occur more than 20 years after MVR (1,3,5). The longest interval between the latest MVR and diagnosis of a new PVL in our series was 29 years, which exceeds the longest interval (27 years) reported to date (3).

The majority of late PVLs are not associated with infective endocarditis (IE) (2). Accordingly, none of our patients had clinically or microbiologically proven IE, thus suggesting a different cause of their PVLs. Based on the findings of significant mitral annular calcification in most of our patients, we postulate that very late PVL occurred as a result of annular tissue under the sewing cuff undergoing long-term degenerative change and calcification, leading to progressive dehiscence at vulnerable areas along the sewing ring. A less likely mechanism could have been an occult infective process which healed spontaneously, leading to a small area of detachment around the sewing ring.

Reoperative surgery for correction of mitral PVL remains a high-risk procedure. Operative mortality ranges from 6% to 13% (1-4). The median EuroSCORE II of our cohort (9.5%) falls within the range (7.5% to 9.6%) described by other contemporary series (3,4). Residual mitral PVL has been reported in 2% to 22% of patients following surgical correction (1,3,4). Recurrence of PVL has been cited to occur at a rate of 4% per patient-year (3). The number of previous MVRs has been shown to be associated with the likelihood of recurrent PVL after surgical repair (1-3). This association was evident in our cohort whereby both patients with residual mild PVLs had undergone at least 2 previous MVRs. The choice of direct suture repair versus repeat MVR was not a risk factor for recurrence of PVL (2,3).

Preoperative 3-dimensional TEE has emerged as a valuable adjunct in delineating the anatomy and morphology of PVL. The intraoperative findings observed in our patients were consistent with preoperative TEE images (Figure 1). Intraoperative TEE is mandatory in these cases to evaluate the presence and degree of residual PVL before the conclusion of surgery. Contrary to previous reports describing PVLs occurring predominantly along the posterior annulus or posteromedial commissure, the PVLs in our series were distributed at various sites along the entire circumference of the sewing ring (2,3).

The majority of our patients had a single leak which was amenable to direct suture closure. To reduce the likelihood of residual PVL, we deliberately avoided implanting a new mitral prosthesis in patients with a heavily calcified mitral annulus. Extirpation of the mitral prosthesis and repeat MVR was required in one patient due to the presence of PVLs at multiple sites of dehiscence along the sewing ring. Fortunately, this patient had a minimally calcified mitral annulus.

Percutaneous transcatheter closure of PVLs has emerged as a promising, less-invasive alternative to surgical treatment. Although long-term durability has yet to be established, a recent meta-analysis has shown successful transcatheter PVL correction to be associated with reduced all-cause mortality and improved functional class in patients deemed unsuitable for surgical correction (6). The success of percutaneous closure of PVL is largely determined by anatomical and device-related factors. Contraindications to percutaneous closure of PVL include large defects involving more than one third of the prosthetic annulus, an unstable or rocking prosthesis, active endocarditis, and intracardiac thrombi (7). Deployment of occluder devices may result in either interference with the prosthetic leaflets or residual regurgitation. There is an increased risk of interference with mechanical disc mobility if more than once device is deployed. As demonstrated in our series, salvage surgery performed emergently after failed percutaneous PVL closure may be associated with increased risk and morbidity.

Very-late PVLs occurring more than 10 years after MVR are rare but serious complications which warrant early attention. Clinicians must be cognizant of this problem in patients who have undergone valve replacement many years ago and have a high index of suspicion in the presence of a new murmur or haemolytic anaemia. Reoperative surgery can be performed in these high risk patients with satisfactory early and midterm outcomes.

The authors thank Clara Zhang and Selena Chew for their editorial assistance.

Informed Consent: The local institutional review board (SingHealth CIRB 2016/2696), along with a waiver of informed consent.