Second primary non-small cell lung cancers (SPLC) are a major cause of death in patients surviving their initial lung cancer (1). Following surgery, the risk of developing a SPLC is five times that of the general population, with a 6-year actuarial risk as high as 20% (2,3). The treatment of SPLC arising post-pneumonectomy is seldom considered, as subsequent surgery is rarely feasible (4-7) and historic outcomes with conventional radiotherapy have been poor with a narrow therapeutic ratio (8,9).

Technological improvements in radiotherapy have enabled higher biologically effective doses to be delivered without increasing toxicity (10). Stereotactic ablative radiotherapy (SABR) is an example of this, where individually tailored multiple non-coplanar fixed beams or rotational arcs are accurately delivered using image guidance to ensure the risk of toxicity in radiosensitive organs is minimized. The use of SABR has enabled an increasing proportion of elderly lung cancer patients to be treated curatively, improving population-based survival (11,12). Using similar techniques, more fractionated radiotherapy (hypofractionated radiotherapy, HFR) has also shown promise (13).

In 2009, we reported our initial experience using SABR to treat 15 patients with early-stage SPLC arising post-pneumonectomy (14). After a short follow-up, the actuarial 1-year survival was 92%. Here, we report clinical outcomes including late toxicity after long-term follow-up in a larger cohort treated using modern radiotherapy techniques, including SABR, HFR and conventional radiotherapy (RT). In addition, we specifically evaluated radiotherapy planning considerations in the post-pneumonectomy setting.

Between April 2003 and December 2011, details of all lung cancer patients referred to the VU University Medical Center were entered into a database documenting patient and tumor characteristics, radiotherapy details and follow-up findings. Patients treated with curative radiotherapy for a SPLC arising post-pneumonectomy were identified. Medical ethics review was not sought, as retrospective reviews fall outside the scope of the Medical Research Involving Human Subjects Act, The Netherlands. For all patients, curative treatment was recommended after multi-disciplinary tumor board review of the case.

As per departmental protocol, curative treatment was considered for all patients that were WHO performance status 0-2, and had no distant metastasis defined on whole-body positron emission tomography and brain magnetic resonance. SABR was the preferred treatment for peripherally located stage I SPLC. In patients with clinical stage II-III disease, and in those with central stage I SPLC where SABR organ at risk constraints could not be met, the recommended treatment was HFR or RT. The organ at risk constraints utilized were consistent with previously published recommendations (15,16). All patients had a planning 4-dimensional CT (4DCT) scan to define the envelope volume within which the gross tumor moved during respiration (17). This was considered the internal target volume. An additional margin of 3-5 mm and 5-10 mm was added to this to create the planning target volume (PTV) for SABR and HFR (or RT) treatments, respectively.

SABR was prescribed to the 80% isodose, ensuring that more than 95% of the PTV received the prescribed dose (18). SABR prescriptions were ‘risk-adapted’, with three fractions of  18-20 Gy delivered for T1 tumors, five fractions of 11-12 Gy for T2 tumors or T1 tumors with broad chest wall contact and eight fractions of 7.5 Gy for central tumors adjacent to the heart, hilus or mediastinum (19). The 11 and 18 Gy fractionation schemes are currently used as modern more accurate dose calculation algorithms suggest this is equivalent to 12 and 20 Gy respectively. HFR and RT treatments were prescribed to an isodose, which ensured more than 95% of the PTV received more than 95% of the prescribed dose (20). The HFR schedule utilized was at the discretion of the treating clinician and constraints accounted for the biological effect of hypofractionation, relative to RT (15,21). Respiration-gated delivery was performed for selected patients undergoing HFR (22). Set-up accuracy was ensured by online image guidance for all patients. For SABR treatments, image guidance prior to 2008 was with bony registration of the thoracic vertebra using orthogonal kV X-ray images (14). Since then, soft-tissue registration of the tumor using cone-beam CT (CBCT) has been used (23). For HFR or RT image guidance was achieved using daily CBCT or orthogonal kV X-ray images with intermittent CBCT. Since 2008, all treatments were delivered using fixed-beam or arc-based intensity-modulated radiotherapy (18,20).

Follow-up included contrast-enhanced CT scans of the lower neck, thorax and upper abdomen at 3, 6 and 12 months, followed by yearly intervals thereafter. Recurrences were defined as: local (LR) with failure in or adjacent to the PTV, regional (RR) with failure in ipsilateral hilus, mediastinum or supra-clavicular fossa and distant (DR) with failure at other sites. Toxicities were scored using the common toxicity criteria for adverse events (CTCAE, v4.0). Three thoracic radiation oncologists (CJH, FJL and PDH) reviewed the clinical records and verified all CTCAE grade 3 or higher toxicities.

Descriptive statistics were used for patient, tumor and treatment characteristics. The timing of events was calculated from the first day of radiotherapy. Actuarial survival and recurrence outcomes were estimated using the Kaplan-Meier method. Median follow-up was determined using the reverse Kaplan-Meier method. Lung dose-volume histogram (DVH) statistics were calculated using the total lung minus the PTV (Lung-PTV). These included the mean lung dose (MLD), and the V5, V10, V20 and V30, where the V5 is the Lung-PTV percentage volume receiving 5 Gy or higher. All statistical analyses were two-sided with P≤0.05 threshold for statistical significance and performed using Statistical Package for Social Sciences (version 18.0).

Twenty-seven patients underwent curative radiotherapy for a SPLC arising post-pneumonectomy. Table 1 summarizes the baseline patient characteristics. The median patient age was 74 years (range, 59-91 years). The majority of patients (78%, 21/27) were WHO performance status 0-1 and the remainder performance status 2. Five patients had previously received adjuvant post-operative RT to total doses of between 45-67.5 Gy. The median time between pneumonectomy and SPLC was 91 months (range, 5-343 months), with 89% (24/27) occurring more than two years later. All patients fulfilled the criteria defined by Martini et al. for differentiating recurrence from SPLC (24). Histological confirmation was obtained in 30% (8/27) of patients and a clinical diagnosis made in the remainder on the basis of a new and/or growing lesion with malignant CT features and/or local PET uptake (25,26). The median tumor diameter was 27 mm (range, 10-105 mm) and PTV volume was 27 cc (range, 11-1,205 cc). The median overall follow-up was 52 months (95% CI, 37-67 months). Table 2 summarizes how various radiotherapy techniques were used in treating these 27 patients. 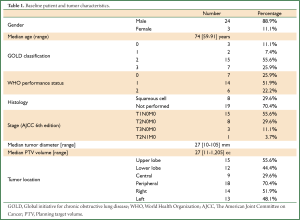 The median overall survival was 39 months (95% CI, 33-44 months, Figure 1). Actuarial 3-year survival was 63% (95% CI, 43-84%). Any recurrence developed in four (15%) patients. Actuarial 3-year rates of LR, RR and DR were 8% (95% CI, 0-21%), 10% (95% CI, 0-23%) and 9% (95% CI, 0-20%), respectively. The patterns of recurrence were isolated LR, isolated RR, isolated DR and RR with DR occurring after a median time of 6 months (95% CI, 0-17 months) post-radiotherapy. Three (11%) patients developed grade 3 or higher radiation pneumonitis (RP), including one in whom RP likely contributed to his premature death (grade 5). None of these patients had received previous radiotherapy. As detailed in Table 3, these patients were all admitted 4-7 months post-treatment with symptoms, including fever, non-productive cough and increasing shortness of breath. There were no non-RP grade 3 or higher toxicities observed. 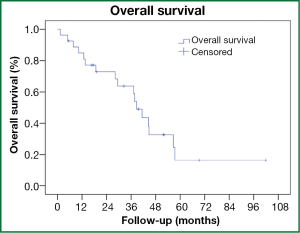 Even with modern surgical techniques, pneumonectomy still constitutes approximately 10% of curative resections (27). Despite SPLC being a significant cause of death amongst lung cancer survivors (1), reporting the use of surgery post-pneumonectomy has been uncommon and included small patient numbers, suggesting it is seldom feasible (4-7). Utilizing modern radiotherapy techniques, we found a median survival of 39 months (95% CI, 33-44) could be achieved in this setting. The 3-year actuarial risk of LR and RR was 8% and 10% respectively, no different from that reported after SABR for early stage tumors (28).

After a median follow-up of 52 months, RP was the only grade 3 or higher toxicity and was observed in 11% (3/27) of patients. A number of radiotherapy planning considerations influence risk of RP in the post-pneumonectomy setting. When using SABR, we previously found the volume of lung receiving 5 Gy or more best predicted the risk of high-grade RP (29). For patients receiving 12 fractions, treatment was delivered using full arcs without avoidance sectors, thereby increasing low dose lung exposure. In the patients treated with 13 or more fractions, treatment was delivered using multiple static beams, which resulted in areas of lung that were spared, as would have been the case when using avoidance sectors. Additionally, with SABR the potential risks of central organ toxicity (30), has led to the highest priority being given to reducing mediastinal doses, an approach we applied to those receiving HFR in 12 fractions. This was however not required given our recent report using SABR in eight fractions where grade 3 toxicity was observed in 6% (4/63) of central tumors treated (31). Patients receiving HFR in 13 or more fractions also had gated treatment delivery, a fact that likely contributed to why no toxicity was observed in these patients. Currently when treating SPLC arising post-pneumonectomy we carefully consider the fractionation schedule, balance the risks of central organ toxicity against RP and utilize less conformal plans with avoidance sectors.

Following pneumonectomy, subsequent surgery is typically limited to either segmental or wedge resections (4-7), however limited resections such as these appear to achieve inferior local control compared to SABR (32), which was the predominant (20/27) radiotherapy technique used in this study. Recently, a randomized trial testing local control after limited resection, with and without intra-operative radiotherapy in high-risk surgical patients was closed. In this study, the rate of grade 3 or higher toxicity at 90-days was 37% in the combined treatment arm, a finding associated with respiratory function and likely to be higher in single lung patients (33). RT is similarly feasible post-pneumonectomy (9), however the available evidence suggests that this is inferior to SABR (34). Case reports have described radiofrequency ablation and percutaneous cryoablation for SPLC and metastasis occurring post-pneumonectomy (35,36). Prospective data confirming the long-term efficacy of these treatments are however lacking (37). Additionally, pneumothorax requiring chest tube occurs in 15% of patients with two lungs, which is again likely to be worse in single lung patients (37).

A limitation of our study is the fact that a significant majority of patients did not have histologically confirmed SPLC prior to radiotherapy, which was in part due to the risks associated with biopsy in this setting. However, in The Netherlands there is a low incidence of PET-positive benign disease and lesions were assessed using a clinically validated algorithm based on CT and PET findings in the multi-disciplinary setting (25,26,38). The accuracy of this approach is suggested by the patterns of recurrence for pathologically confirmed and unconfirmed lung cancer following SABR, which is different (39).

To the best of our knowledge, this represents the largest series describing clinical outcomes for the curative treatment of SPLC arising post-pneumonectomy. The American Association for Thoracic Surgery recently recommended annual low-dose CT surveillance for those able to tolerate subsequent curative treatment (40). As prolonged survival can be achieved with modern radiotherapy techniques, our findings reiterate the importance of such follow-up and referral for a radiotherapy opinion. Should radiotherapy be offered, the risk of RP should be acknowledged and treatment planned accordingly.