Autofluorescence imaging bronchoscopy as a novel approach to the management of tracheobronchopathia osteochondroplastica: a case report

Tracheobronchopathia osteochondroplastica (TO) is a rare disease characterized by the development of multiple, submucosal cartilaginous and osseous nodules (1-3). In general, rare diseases face significant challenges with regard to diagnosis and optimal management and treatment (4). The collection of adequate data pertaining to the clinical course of patients is necessary to provide useful information regarding response to treatment and disease progression. TO is not only rare but also presents highly varied and unpredictable clinical manifestations (1,2). Consequently, the management and treatment strategies remain unclear. Although there is less emphasis on the need for new devices, an accurate evaluation tool is an important aspect of management. Bronchoscopy is the gold standard for TO diagnosis; however, it cannot satisfactorily assess subtle mucosal changes to determine the treatment response (5). Autofluorescence imaging bronchoscopy (AFI) is a recently introduced advanced endoscopic technology that can detect subtle mucosal changes with the aid of different colors (6). Here we report the AFI findings for a case involving a 42-year-old man with typical histopathological findings of TO.

A 42-year-old man with a 2-year history of chronic cough with sputum presented to our hospital with a complaint of hemoptysis since 2 weeks. Chronic sinusitis was the only significant component of his past medical history. He had no history of smoking. His physical examination was unremarkable. Routine blood investigations and immunological tests revealed normal findings. Staining for acid-fast bacilli was also negative. A pulmonary function test showed neither obstructive nor restrictive ventilation disorders. Flow-volume loop showed air-flow limitation which is expiratory plateau. Chest radiograph did not show any apparent findings. Computed tomography (CT) revealed multiple calcified nodules in the tracheobronchial lumen without posterior wall involvement (Figure 1A). Bronchoscopy revealed widespread bronchial wall edema and diffuse and irregular nodules protruding into the entire tracheal and two main bronchial lumens (Figure 1B). The lobar bronchi were spared. We subsequently performed AFI, which showed the entire circumference of the trachea in a magenta color (Figure 1C). The lobar and segmental airways appeared green. Histopathological examination revealed squamous metaplasia with submucosal ossification, which was consistent with a diagnosis of TO (Figure 1D,E). 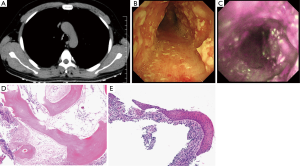 TO is a rare disease described in 1857 by Wilkes et al. (1-3). While the accurate incidence remains unknown since it depends on each study population and symptom, it has been reported to be in the range from 0.02% to 3% (2,7). The development of CT and bronchoscopy techniques have improved the detection of this disease. However, the etiology remains unknown despite the increasing number of cases. Because of the lack of understanding about the etiological and pathogenetic mechanisms, there are no standard guidelines for TO management. Histopathological findings are varied and include squamous metaplasia, cartilage formation, ossification, and/or calcification in the submucosa (1-3). Although it is not clear whether squamous metaplasia is the first stage of the pathogenetic process, followed by cartilage formation and ossification, or simply secondary to the chronicity of the condition, it remains the most common histopathological finding in TO patients (1,2).

AFI is a newly advanced bronchoscopy system that can detect weak autofluorescence signals from the bronchial mucosa (6). This technique can identify abnormal mucosa with the aid of different colors; pathological mucosa appears magenta while normal bronchial mucosa appears green. Although AFI has been developed to improve the early detection of malignant lesions and is widely accepted in oncological clinical practice, it exhibits high sensitivity but significantly low specificity. Several studies have shown that it can detect not only bronchogenic carcinoma in situ but also non-malignant lesions such as metaplasia (8-10). The ability of AFI to detect metaplasia can be useful for improving the visibility of pathological lesions in TO.

Currently, there is no consensus for the treatment of TO. Most treatments are not aimed at preventing disease progression but at palliation, and they vary from symptomatic management to bronchoscopic intervention for patients with severe airflow obstruction (7). Some studies have shown that inhaled corticosteroids are useful for patients with TO (5,11). Zhu et al. administered inhaled corticosteroids to eight patients (5) and reported a significant decrease in the number of lesions with cartilaginous nodules in two and the alleviation of symptoms to a certain extent in the remaining six, despite the absence of significant changes in bronchoscopy findings. These results suggest that evaluation using conventional bronchoscopy is insufficient for the detection of treatment responses. In our case, AFI showed the entire circumference of the trachea in a magenta color. On the other hand, the tracheal involvement was detected as irregular nodules protruding into the lumen without posterior wall by CT, suggesting that CT is also insufficient to detect subtle mucosal changes and to evaluate extent of the entire involvement of TO. Pulmonary Function Test, CT and conventional bronchoscopy could be enough to evaluate the significant disease progression. However, an accurate evaluation tool for predicting the response to treatment is thus required for the appropriate management of TO; AFI could be a suitable candidate for this purpose.

In conclusion, although conventional bronchoscopy is the gold standard for diagnosis for TO, our findings suggest that AFI is a suitable approach to the management and follow-up to develop the novel treatment of TO. To the best of our knowledge, this is the first report documenting the use of AFI for the detection of tracheal involvement in TO. Although further studies are necessary to clarify the clinical utility of AFI, our report draws attention to the potential of this technique for appropriate management and follow-up.