Despite a large body of evidence, there is an ongoing, controversial debate whether coronary artery bypass graft surgery should be performed with or without extracorporeal circulation. This intense debate is held between three schools of thought: the “pure”, off-pump surgeons, the on-pump surgeons and the “selectivists” group that reserves off-pump surgery for selected cases only. Historically, the shift towards off-pump coronary artery bypass (OPCAB) grafting was proposed both to reduce the operation cost in developing countries but also to avoid the deleterious effects of the contact of blood with the artificial extracorporeal circuit (i.e., mainly the systemic inflammatory response and coagulopathy) (1-3). Furthermore, avoidance of aortic cannulation and minimisation of aortic manipulation would theoretically translate into reduced cerebral stroke, hence reduced morbidity and perioperative mortality (4). On the other hand, on-pump surgeons argue that the comfort of the bypass circuit results in a better anastomotic technique that translates into a more complete revascularization and better graft patency (3).

Developed about 40 decades ago (5-7), OPCAB reached a plateau in Europe, accounting for nearly 15–20% of all coronary operations, while in Asia 60–100% of patients are offered coronary artery bypass grafting (2). A retrospective analysis of the Society of Thoracic Surgeons Adult Cardiac Surgery Database in USA revealed a decline in off-pump operations, currently being used in fewer than one out of five patients (8). The current review focuses on the main outcomes of on-pump coronary artery bypass (ONCAB) grafting versus OPCAB from randomized controlled trials (RCTs) (i.e., level I evidence). The main criticism of RCTs in this area, is the under powering because of recruitment of low risk patients but also because of the low mortality and morbidity of coronary artery bypass grafting that would require very large sample populations to detect a difference (4). Therefore, we will also be reviewing pooled data from recent, updated meta-analyses of randomized trials only. We selected in our review large sample size RCTs or large meta-analyses of RCTs to discuss the hard end-point outcomes but smaller trials were also included to discuss other outcomes.

The majority of the large RCTs to date failed to show a difference in early mortality between off-pump and on-pump surgery (1,3,9-13). One small sample size RCT by Fattouch et al. showed a reduced mortality in patients with ST elevation undergoing urgent/emergent off-pump coronary surgery compared to on-pump surgery (14). Deppe et al. in meta-analysis of RCTs on almost 16,900 patients found no difference in 30-day mortality. Kowalewski et al. in meta-analysis of over 19,000 patients demonstrated no significant difference in short term mortality (1). The evidence is summarised in Table 1. 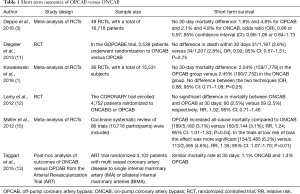 Angelini et al. pooled midterm follow-up outcomes from two RCTs—Beating Heart against Cardioplegic Arrest Studies (BHACAS 1 and 2). The mean follow-up was 25.0 months for BHACAS 1, and 13.7 months for BHACAS 2. Combined all-cause mortality did not differ between patients in off-pump and on-pump groups [hazard ratio (HR), 0.57; 95% confidence interval (CI): 0.17–1.96] (16). A later study by the same group found no difference in long term survival up to 6–8 years between on-pump and off-pump coronary surgery (HR, 0.84; 95% CI: 0.58–1.24; P=0.39) (17). The Veterans Affairs Randomized On/Off Bypass (ROOBY) trial randomly assigned 2,203 of patients to either off-pump or on-pump. It was the first trial where off patients were recruited in based on the surgeon’s experience (minimum number of 20 cases) though some argue that the learning curve extends beyond this set point (4). The primary long term (1 year) composite of death, repeat revascularization, non-fatal myocardial infraction was higher (9.9% vs. 7.4%, P=0.04) for the OPCAB group with no significant differences between the individual composite components. The sensitivity analysis revealed a trend toward more death from cardiac causes in the on-pump group (2.7% vs. 1.3%, P=0.03). A Cochrane systematic review of RCTs off-pump versus on-pump found an increased risk of death with off-pump in the long term (>30 days) follow-up studies [relative risk (RR), 1.34; 95% CI: 1.08–1.67; P=0.009] (15). Luo et al. in a recent meta-analysis of RCTs found no difference in patients with over 6 months’ follow-up [odds ratio (OR), 1.02; 95% CI: 0.86–1.22; P=0.81] (18). The Coronary Artery Bypass Grafting Off- or On-Pump Revascularization Study (CORONARY) remains the largest RCT to date that recruited 4,752 patients (12,19). At 1 year the study reported no difference in primary composite of death, myocardial infarction, stroke, or new renal failure requiring dialysis. The primary outcome event had occurred in 288 participants (12.1%) in the off-pump group and 316 participants (13.3%) in the on-pump group (HR with the off-pump procedure, 0.91; 95% CI: 0.77–1.07; P=0.24). There was no significant difference between the rates of the individual primary outcome components. The 5-year long term outcomes from the CORONARY trial are still awaited (Table 2). 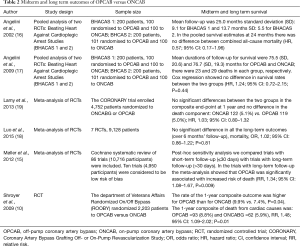 Graft patency, number of grafts and need for repeat revascularization

In contrast to previous studies, several trials reported poor graft patency for patients undergoing off-pump. Khan et al. found a poorer graft patency at 3 months for patient undergoing OPCAB (22). Houlind et al. found reduced graft patency in the OPCAB group compared to the on-pump group, on 481 patients that completed angiographic follow-up at 6 months (23). At 1 year follow-up, Widimsky et al. found a lower graft patency for the off-pump vein grafts while the arterial graft patency were similar for both arms (24). The ROOBY trial found a significantly lower graft patency in the off-pump group than in the on-pump group (82.6% vs. 87.8%, P<0.01) at 1 year (10). Similar results were found by Zhang et al. in a recent meta-analysis of 12 RCTs, on a total of 3,894 patients (4,137 grafts). Interestingly, the authors found an increased risk of occlusion of vein grafts but no difference in arterial graft patency [left internal mammary artery (IMA) and radial artery conduits] (25). In the longest follow-up study to date (up to 6 to 8 years) of patients recruited in two randomized trials comparing OPCAB to ONCAB, Angelini et al. demonstrated that the likelihood of graft occlusion was no different between OPCAB (10.6%) and ONCAB (11.0%) groups (OR, 1.00; 95% CI: 0.55–1.81; P>0.99). Furthermore, the authors found the graft occlusion to occur more likely at the distal anastomosis (OR, 1.11; 95% CI: 1.02–1.20) in both groups (17) (Table 3). 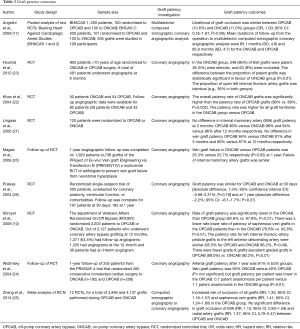 Number of grafts and repeat revascularization 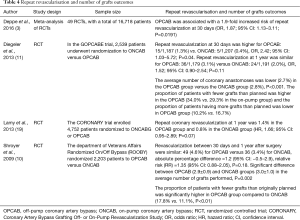 Cerebral stroke is a major complication after coronary artery bypass grafting that increases mortality, morbidity and cost (27). Minimization of aortic manipulation (28) and avoidance of the extracorporeal circuit (29) reduce the risk stroke and cerebral embolization respectively. Therefore, OPCAB should offer better outcomes in this respect. The most prominent off-pump versus on-pump trials to date failed to show a reduction of stroke rates with use of OPCAB (10-12). Deppe et al. in the subgroup meta-analysis of 13 trials found no difference in stroke rates between OPCAB or ONCAB (3). However, the recent meta-analysis by Kowalewski et al. on 40 RCTs found OPCAB to be associated with a significant 28% reduction in odds of cerebral stroke (OR, 0.72; 95% CI: 0.56–0.92; P=0.009; I2=0%) (1).

Several studies suggested neurocognition to be more related to aortic manipulation rather the use of extracorporeal circulation (30,31). The ROOBY trial demonstrated no difference in neurophysiological outcomes between off or on-pump groups (10). Similarly, three other randomized trials (32-34) and two systematic reviews of RCTs (35,36) failed to show any benefit with OPCAB in terms of neurocognitive function (Tables 5,6). 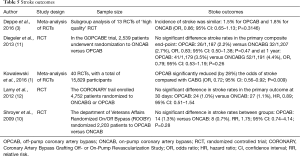 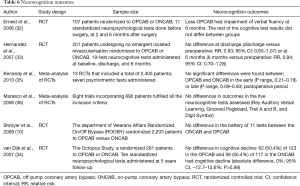 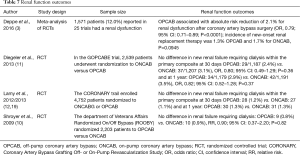 The current literature debating about perioperative morbidity related to OPCAB or ONCAB focuses on the following clinical outcomes: low cardiac output, perioperative myocardial infarction, infection rates, bleeding and reintervention rates, length of stay, ventilation time and rates of atrial fibrillation. The ROOBY trial demonstrated no difference in reoperation for bleeding, new mechanical support or mediastinitis (10). In the CORONARY trial, the use of OPCAB reduced perioperative transfusions (50.7% vs. 63.3%; RR, 0.80; 95% CI: 0.75–0.85; P<0.001), reoperation for perioperative bleeding (1.4% vs. 2.4%; RR, 0.61; 95% CI: 0.40–0.93; P=0.02), acute kidney injury (28.0% vs. 32.1%; RR, 0.87; 95% CI: 0.80–0.96; P=0.01), and respiratory complications (5.9% vs. 7.5%; RR, 0.79; 95% CI: 0.63–0.98; P=0.03). Two large meta-analyses of RCTs (1,3) found no difference in myocardial infraction rates between ONCAB or OPCAB. In the meta-analysis by Deppe et al. (3), the incidence of low cardiac output and infection were reduced with use off-pump. Furthermore, the number of patients needing transfusion and the chest tube drainage was significantly reduced in the in the off-pump group, but with no difference in re-thoracotomy rates. In the same meta-analysis (3) there was no difference in atrial fibrillation rates between off-pump versus on-pump, contrary to a smaller, previous meta-analysis of RCTs (37) (Table 8).

Most of the available evidence for the high risk patient is focused on several high risk groups: left ventricular dysfunction, renal impairment, left main stem disease, old age, stroke, re-do coronary artery bypass grafting, chronic lung disease, emergency surgery and patients with an European system for cardiac operative risk evaluation (EuroSCORE) of >5 (1). In a RCT of 411 high risk patients (EuroSCORE ≥6), OPCAB was found to reduce mortality and morbidity at 30 days (38). Similarly, a smaller RCT by Hlavicka et al. of 206 patients with EuroSCORE ≥6 found a significantly higher incidence of the combined endpoint (all-cause deaths, stroke, myocardial infarction, or renal failure requiring new haemodialysis) in the ONCAB group at 30 days, while at 1 year there was no significant difference between the two groups (39). In the large meta-analysis of RCTs by Kowalewski et al., the main finding was a significant linear relationship between the risk profile and the beneficial effect of OPCAB (1). A randomized study of patients with preoperative non-dialysis-dependent renal insufficiency by Sajja et al. demonstrated that ONCAB adversely affects renal function compared to the off-pump group (40). Two large RCTs on elderly populations failed to show any mortality or morbidity benefit with use OPCAB (11,23). Masoumi et al. reported significantly lower rates of mortality, morbidity, balloon-pump support, inotropic usage, gastrointestinal bleeding, renal dysfunction, reintubation, intensive care and hospital stay reported patient with a poor ejection fraction (≤35%) in patients randomly assigned to OPCAB or ONCAB (41). In the RCT by Fattouch et al. patients undergoing emergency OPCAB had a reduction in early mortality (14) while the late mortality did not differ compared to conventional surgery (42). Several retrospective studies found a benefit in using off-pump techniques in other high risk groups such as: females (43) or reoperative coronary artery bypass grafting (44). Overall, the weight of randomized data for the high risk patient undergoing coronary surgery shows a clear benefit from OPCAB as demonstrated by other landmark retrospective studies (45) or large meta-analyses of non-randomized trials (46) (Table 9). 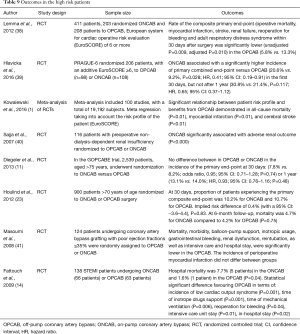 The study was supported by the British Heart Foundation and the NIHR Bristol Cardiovascular Biomedical Research Unit.