Relationship between survival and age in patients with idiopathic pulmonary fibrosis

Idiopathic pulmonary fibrosis (IPF) has an overall poor prognosis. The median survival time of patients with IPF was 2–3 years from the time of diagnosis, in several retrospective longitudinal studies (1-6). There are limited data on clinical factors associated with increased mortality (4). Poor prognostic baseline factors for survival of patients with IPF are the level of dyspnea, diffusing capacity of the lung for carbon monoxide (DLco) <40% predicted, desaturation <88% during the 6-minute walk test, extent of honeycombing on high-resolution computed tomography of the chest, and pulmonary hypertension (4). A simplified scoring system using age, respiratory hospitalization, percent predicted forced vital capacity (FVC), and 24-week change in FVC was developed for determining prognosis and guiding clinical management (7). However, there is no generally accepted method of combining these predictors to determine an accurate prognosis. Whether older patients with IPF have a worse prognosis is controversial. Several studies (4-6,8-10) have suggested that old age may be associated with bad prognosis in IPF.

Relative survival rate has not been used widely for IPF. The Korean Interstitial Lung Disease (ILD) Research Group carried out a national, multicenter survey to evaluate the clinical, physiological, and radiological aspects of IPF [Korean national survey of idiopathic interstitial pneumonia (IIP)] (15,16). The aim of this study was to assess whether age can affect survival in patients with IPF and to assess the difference between observed and relative survival rated according to age in a large population using Korean national survey data.

This study was a large retrospective multicenter study. The Korean ILD Research Group, comprising 54 universities and training hospitals, enrolled patients newly diagnosed with IPF by pulmonology specialists (national survey of IIP in Korea). Patients were diagnosed with IIP from January 1, 2003 to December 31, 2007. The patients’ medical records were entered into the Korean ILD web-based registry (www.ild.or.kr). We collected the data using a web-based registry from February 2008 to July 2008.

The Scientific Committee of the Korean Academy of Tuberculosis and Respiratory Diseases reviewed all enrolled patients. Patients with clinical evidence of underlying connective tissue disease or any other cause of interstitial disease were excluded from the study. In total, 2,186 patients with IIP were registered to the Korean IIP national survey.

We re-analyzed the Korean national survey data, consisting of 1,685 patients with IPF by clinical diagnosis (1,027 patients) or pathological diagnosis (658 patients) according to the 2002 ATS/ERS criteria (6). Twenty-two cases with incomplete data related to their smoking history were excluded. Consequently, 1,663 medical records of patients with IPF were evaluated including treatment, date of death or final follow-up, and cause of death in this study. We assessed the overall survival rate of patients with IPF. We divided by treatment the group of patients treated with corticosteroids or cytotoxic therapy during follow-up and only conservative treatment.

Survival distributions were computed using the Kaplan-Meier method and differences in survival among the groups, with factors of interest, were compared using the log-rank test. The Cox proportional hazards model was used to determine the effect of various factors on survival.

This study protocol was reviewed and approved by the Institutional Review Board (IRB) of each hospital, and exempted from approval by the IRB of Soonchunhyang University Seoul Hospital (IRB file number: SCHUH 2014-09-007), which deemed that informed consent was unnecessary.

Significant differences were observed in the diagnostic method among age groups (P<0.001) (Table 1). The older age groups tended to have a higher number of clinical diagnoses. There was a difference between the treatment groups in regard to the proportions according to age (P<0.001). The proportion of receiving treatment with corticosteroids or cytotoxic therapy was higher in the group of younger patients. The proportion of never smokers was not different between the age groups. No differences in comorbidities (hypertension, DM, heart disease, tuberculosis, COPD, and lung cancer) were observed among age groups. 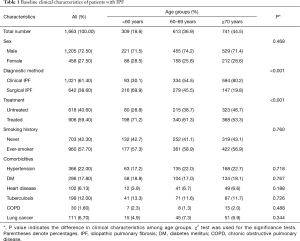 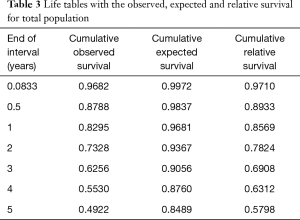 A univariate survival analysis of patients with IPF showed that older age (≥70 years), clinical diagnostic method without surgical lung biopsy, non-treatment, presence of lung cancer, and low initial FVC (% pred) (<60%) were significant poor prognostic factors (Figure 1). The observed survival rate of the ≥70 years of age group was significantly lower than those of other age groups (P<0.001) (Figure 1A). 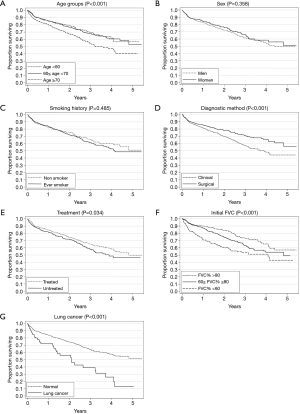 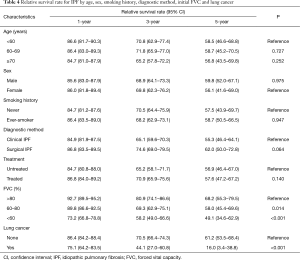 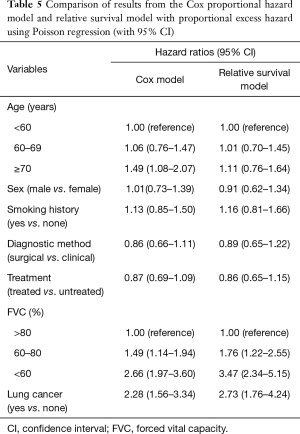 This study shows that no difference in relative survival rate was detected between the older group (≥70 years) and the younger group (<60 years) (Figure 2), suggesting that the prognosis of older patients is not significantly different than that of younger patients when the effect of age is considered in other causes of death except IPF. Although the observed survival rate of the older group was significantly lower than those of the other groups, it showed a similar survival pattern to that of previous studies (1-6).

The survival data of patients with IPF are suitable for a relative survival analysis because IPF prevalence is low. If the prevalence of a disease is very low, it will have little impact on the relative survival estimates (14). Relative survival estimates are based on the deaths expected to occur in a cohort of patients with IPF with respect to the general population without the disease. The estimates adjust for the disease-specific mortality associated with age separately from the expected mortality experienced in the general population (14).

The mechanism of effect of aging on survival in patients with IPF is unclear. Age-related changes in cellular function may play roles in IPF (21). Several mutations (mutations in surfactant proteins, gel-forming mucin, and telomerase) suggest a genetic predisposition (22-24), and inflammation and fibroblast and epithelial cell dysfunction are possible pathogenic changes in IPF.

This study was a broad population-based study. The cause of death is often difficult to establish with certainty due to limited information. The relative survival analysis was not limited because individual cause of death is not required for a relative survival analysis. However, this study had several limitations. First, it was retrospective and re-analyzed Korean National Survey data. Therefore, baseline clinical characteristics differed among age groups, which may have influenced survival. In addition, there may be a difference between the age groups of patients with IPF treated with corticosteroids or cytotoxic therapy that may have affected mortality. To overcome this limitation, we adjusted the survival data by multivariate analysis with risk factors such as diagnostic method, FVC, presence of lung cancer and whether the treatment was done or not. Since the data collected could be analyzed retrospectively, only 74% of the overall cause of death among total 414 deaths was known; hence, we could not analyze the cause of death. We could not describe the proportion of long term oxygen therapy because the use of oxygen therapy was not collected. Second, this study was based on 2002 ATS-ERS guidelines for diagnosing IPF. This population may have different outcomes from those of the current diagnostic guidelines. However, the diagnostic criteria not seemed to affect the purpose of present study to know the effect of age on the mortality. If possible usual interstitial pneumonia (UIP), one of the classified IPF on new diagnostic criteria, were mixed up with definite UIP, it does not affect mortality because of the mortality of definite UIP and possible UIP was not different (25). Third, present study did not show the survival rates in patients less than 50 years of age only. We divided the population into three groups for analysis because the number of patients less than 50 years of age was too small to analyze, and no difference in the survival curve pattern was detected between patients aged less than 50 years and those aged 50–59 years (data are not shown). Fourth, this study included three patients, who were diagnosed by surgical method, aged less than 40 years. The diagnosis of IPF at these ages is extremely rare, and diagnosis could turn to collagen vascular disease associated UIP in the future. However, the pathological findings of IIPF and collagen vascular diseases were different in terms of presence of germinal centers and lymphoid follicles (26). We failed to find out germinal centers and lymphoid follicles in biopsy from patients aged less than 40 years, and then we included these patients the present study. Even if these patients turn to collagen vascular disease associated UIP, the results of this study are less likely affected because of very small size.

The authors are grateful to all members of the Korean ILD Research Group who helped gather the data for analysis. This work was supported by Soonchunhyang University Research Fund.

Ethical Statement: This study protocol was reviewed and approved by the Institutional Review Board (IRB) of each hospital, and exempted from approval by the IRB of Soonchunhyang University Seoul Hospital (IRB file number: SCHUH 2014-09-007), which deemed that informed consent was unnecessary.