The efficacy of thoracoscopic fissureless lobectomy in patients with dense fissures

The incidence of prolonged air leak (PAL) is a common complication after pulmonary major surgeries, which incidences reported 7.6–10% in several studies (1-4).

Although many intraoperative methods have been reported for general thoracic surgeries, including the use of surgical sealants or stapler line buttress materials to avoid postoperative air leakage, none of them has been shown to have clear benefits or universal applicability (5,6). In addition, it is also considered to be unclear whether perioperative managements including water seal management or digital drainage system after a pulmonary lobectomy reduces the incidence of PAL or not (7-9).

PAL after a lobectomy frequently occurs especially in patients with dense fissures. For these patients with dense fissures, we use the “thoracoscopic fissureless technique” to avoid postoperative PAL. Although there have been several reports demonstrating the efficacy of fissureless lobectomy to avoid postoperative PAL, most of these reports demonstrated only right upper fissureless lobectomies because the fissure between a right upper and a middle lobe is frequently fused compared with other fissures (10,11). And, Gómez-Caro et al. and Nomori et al. reported that the efficacy of fissureless technique in any type of lobectomy, however, their approach was via mini-thoracotomy or thoracotomy (12,13). To our best knowledge, there has been an only report demonstrating the efficacy of thoracoscopic fissureless lobectomy by Stamenovic and colleagues (14). Compared to a thoracotomy or a mini-thoracotomy approach, a thoracoscopic approach might be useful for the fissureless technique because it gives a good operative view from various angles without dividing the fissure (15).

In our department, the fissureless lobectomy is applied for patients with a fused fissure (fissural grade III or IV as proposed by Craig in 1997) or inflammation makes it difficult to expose the PA, while the traditional technique is used for other patients (16).

Thoracoscopic lobectomies were performed under general anesthesia using one-lung ventilation with the patient in the lateral decubitus position. We used a 5- or 10-mm flexible-type thoracoscope in any case. While the assistant surgeon in a dorsal position, the operating surgeon stood ventral to the patient. 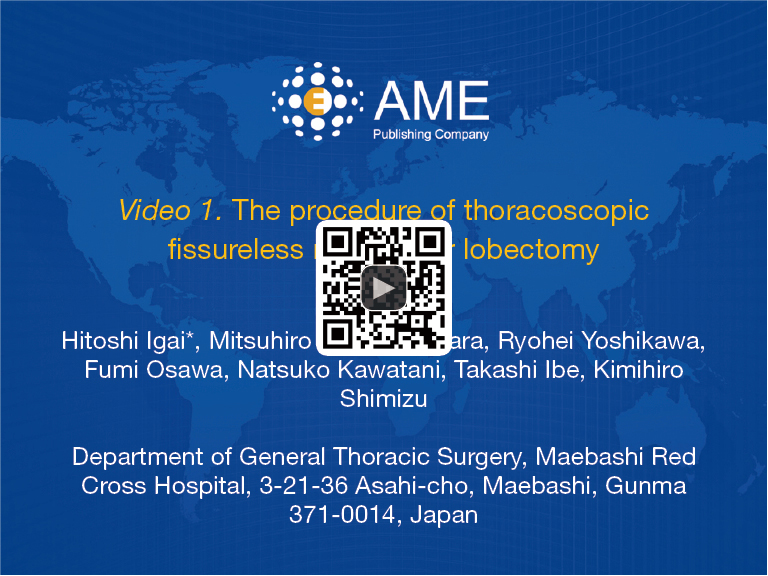 The inferior pulmonary vein (IPV) and the lower bronchus are divided after dissection of the pulmonary ligament while the lower lobe is retracted towards the head. The pulmonary arteries lay right behind the bronchus. We should identify common basal and superior segmental arteries, and then divide each. Prior to the division of lower bronchus, the sheath of pulmonary arteries should be dissected. This procedure will avoid the injury of the branches of the cranial PA.

We demonstrate a right upper lobectomy and a left lower lobectomy in the attached video (Figures 1,2). 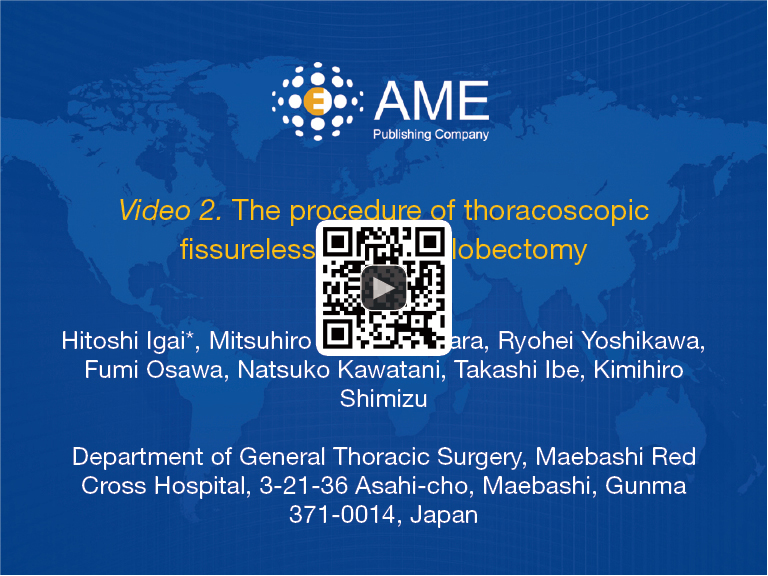 Figure 2 The procedure of thoracoscopic fissureless left lower lobectomy (18). At first, pulmonary ligament is incised up to inferior pulmonary vein (IPV) while the lower lobe is retracted towards the head. And then, the sheath of pulmonary artery (PA) is dissected. IPV is exposed and divided by a stapler. And, the lower bronchus is dissected and divided by a stapler. The pulmonary arteries lay right behind the bronchus. We identify common basal and superior segmental arteries, and then divide each. Finally, the dense interlobar fissure is divided by staplers. Available online: http://www.asvide.com/articles/1306

Thoracic drainage started with a suction or a single chamber water seal used simple gravity, depending on the patients, after the operation.

The chest tube was removed at the time when air-leakage disappeared or total volume of pleural effusion became under 300 mL/day on postoperative day 2 or later.

In cases that persistent air-leakage lasted longer than 4 days, postoperative pleurodesis was performed.

Table 2 demonstrates the ratio of each lobectomy in the two groups. 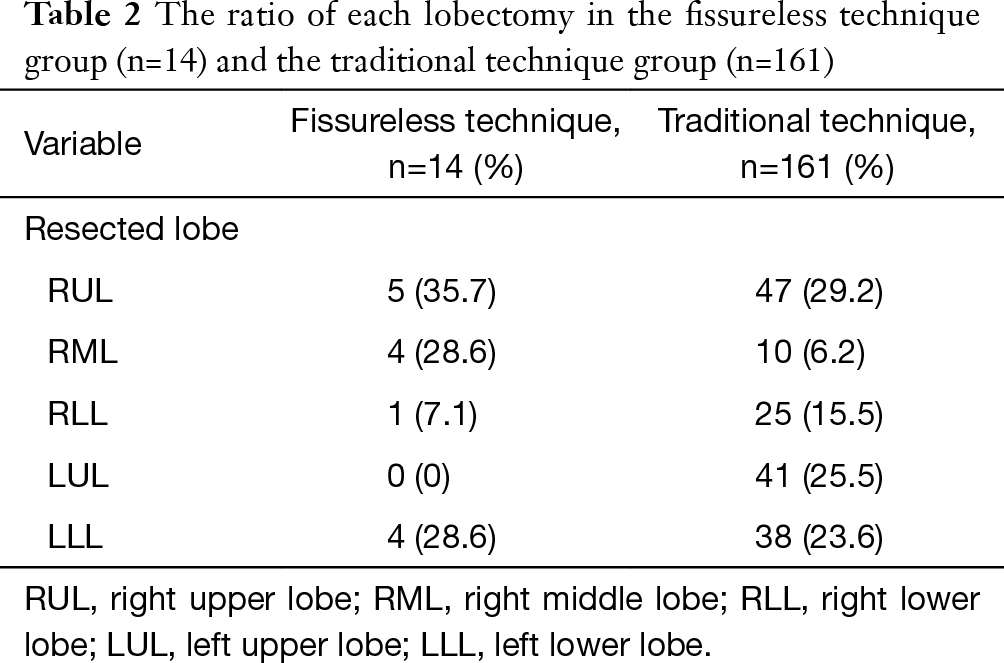 Table 3 lists the patients’ characteristics and perioperative results in the two groups.

In our study, operation time in fissureless lobectomy group was longer than that in traditional lobectomy group although there was no significant difference between the two groups in any other parameter including duration of chest tube drainage and length of postoperative hospital stay. In the patients’ population of our study, the fissureless lobectomy group was composed of only the patients with fused fissure, while the traditional lobectomy group was composed of the patients with completely or almost divided fissure. The patients with fused fissure are likely to have pulmonary comorbidities including chronic obstructive lung disease, interstitial pneumonia, or intrathoracic adhesion. For these patients, we usually have some difficulties in performing surgery or treating postoperative care. We speculate these difficulties of the patients in the fissureless technique group led the longer operation time than that in the traditional technique group. In addition, we were unfamiliar with fissureless techniques in a totally thoracoscopic approach even if we were familiar with a fissureless lobectomy in thoracotomy approach. We consider this unfamiliarity is another reason why the fissureless technique group had the longer operation time.

In fissureless lobectomies, dominant bronchus is usually resected prior to dominant pulmonary arteries. Therefore, the procedure sometimes seems to be not safe for the surgeons who are not familiar with it. Especially in either lower lobectomy, the PA that should be resected is located right behind lower bronchus, which potentially leads a catastrophic pulmonary arterial injury when the connective tissue between the lower bronchus and the PA is dissected. To avoid this pulmonary arterial injury, we usually dissect the sheath of the PA enough to proceed through the tissue between the lower bronchus and the PA smoothly for forceps or staplers. We consider this technique is most important to avoid the accidental injury of the PA in either lower lobectomy. In addition, this technique leads the sufficient dissection of lymph nodes around the bronchus. It is sometimes criticized that a fissureless lobectomy potentially causes insufficient lymph nodes dissection for malignant diseases. However, the bronchus can be almost separated from the PA by using this technique. Therefore, we consider that we can perform enough lymph nodes dissection for malignant diseases even in the fissureless lobectomy by using the technique that the sheath of the PA is dissected prior to division of the bronchus.

Although the patients who underwent thoracoscopic fissureless lobectomies had longer operating times, no significant differences were observed between the groups in the other perioperative results, including the duration of postoperative drainage. This study is limited by its retrospective character and selection bias of the patients. However, these non-inferior results might indicate that a thoracoscopic fissureless lobectomy is feasible and safe, and useful to avoid postoperative PAL in patients with dense fissures.

The authors appreciate the contributions of all the surgeons, coworkers who participated in this study, and thank the editors and reviewers for their help with this manuscript.

Ethical Statement: The institutional review board of Maebashi Red Cross Hospital determined that this study was exempt from formal review.