Video-assisted thoracoscopic surgery (VATS) pulmonary lobectomy became an accepted method for the treatment of early-stage non-small-cell lung cancer (NSCLC). There are several variants of VATS lobectomy. In recent years the uniportal approach described by Gonzales-Rivas gained a world-wide interest (1). The uniportal VATS approach can be performed through the intercostal incision as has been practiced in vast majority of published cases, but there are also two other approaches, namely the subxiphoid and the transcervical incision (2,3). The last approach was first described by our team in 2007. In that time, we performed right upper lobectomy and afterwards the left upper lobectomy through the transcervical approach combined with single-port intercostal VATS (3,4). Our method was to combine lobectomy with Transcervical Extended Mediastinal Lymphadenectomy (TEMLA), preceding a pulmonary resection with intraoperative examination of the mediastinal nodes with the imprint cytology technique (5,6). From 2016, after adopting the technique of uniportal intercostal lobectomy we started to perform transcervical VATS uniportal lobectomies, without additional intercostal ports. In this report we describe our initial experience and describe in detail for the first time the technique of the right lower lobectomy.

Transcervical pulmonary lobectomy can be proposed to patients with histologically, or cytologically proven clinical stage I (cI) NSCLC as an alternative to VATS lobectomy.

Patients with NSCLC more advanced than cIB currently cannot have transcervical lobectomy. The other contraindications include severe atherosclerotic lesions of the innominate artery and the aortic arch and previous cardiac surgery. Severe pleural adhesions and calcified intrapulmonary nodes after previous tuberculosis are also technical obstacles for this kind of surgery.

The patient was positioned supine on the operating table with a roll placed beneath the thoracic spine to elevate the chest and to hyperextend the patient’s neck. Under general anaesthesia an endobronchial tube was inserted to conduct selective lung ventilation during the latter part of the procedure.

A transverse 6–8 cm transcervical collar incision was made in the neck in a standard way with division and suture-ligation of the anterior jugular veins bilaterally. The sternal manubrium was elevated with sharp one-tooth hook connected to the Rochard frame (Aesculap-Chifa Company) to widen the access to the mediastinum. The first part of the procedure was TEMLA. The technique of this procedure, and possible pitfalls and the methods of management of intraoperative complications was published elsewhere (5). In brief, the technique of TEMLA included dissection of all mediastinal nodal stations except for the pulmonary ligaments nodes (station 9). The subcarinal nodes, the periesophageal nodes, the right and left lower paratracheal nodes, and the right hilar nodes (stations 7, 8, 4R, 4L and 10R) were removed in the mediastinoscopy-assisted technique and the paraaortic and the pulmonary-window nodes (stations 6 and 5) removed in the videothoracoscopy-assisted technique, with the videothoracoscope inserted through the transcervical incision. The superior mediastinal nodes and upper right and left paratracheal nodes (stations 1, 2R and 2L) were removed in the open surgery fashion under direct eye control. The prevascular and retrotracheal nodes (stations 3A and 3P) were removed in pre-selective cases. Generally, the mediastinal pleura was not violated and no drain was left in the mediastinum. Bilateral supraclavicular lymphadenectomy and even deep cervical lymph node dissection is possible during TEMLA through the same incision.

The nodes removed during TEMLA were sent sequentially to intraoperative pathologic examination with use of the imprint cytology technique, which was described in the other publication. The imprint cytology technique is a highly reliable technique much less consuming than a frozen section analysis. Due to this advantage the time of nodal examinations adds only 15 to 20 minutes to the total time of the operation. After receiving the negative results of the imprint cytology, confirming there were no nodal metastasis the VATS lobectomy part starts. The position of the patient is slightly changed with the introduction of the roll beneath the patient’s operating side. Additionally, the operating table is rotated to achieve a semi-lateral position of the patient. The ventilation of the operated lung is disconnected and the mediastinal pleura is opened (Figure 1). In this report only the right lower lobectomy is described. The dissection starts from division of the pulmonary ligament which is done with electrocautery hook (Figure 2). The inferior pulmonary vein is dissected and managed with vascular endostapler (Figure 3). The station 9 nodes are removed. Next step is the incision of the mediastinal pleura covering the right main bronchus caudally to the azygos vein. Blunt dissection with a peanut sponge is continued along the right main and the intermedius bronchus to reach the segment 6 bronchus (Figure 4). Further blunt dissection is performed to remove some station 11 nodes to visualize the segment 6 artery (Figure 5). The dissection is continued along the pulmonary artery to create a space for introduction of the stapler to divide the posterior part of the oblique fissure, which is made with application of the stapler introduced between the segment 2 and the segment 6 arterial branches (Figure 6). Due to division of the fissure the distal part of the artery is visualized. The second stapler is applied with much attention paid to avoid injury of the middle lobe artery (Figure 7). All arterial branches of the pulmonary artery supplying the lower lobe are clearly visible. They are managed with vascular endostapler or vascular clips (Figure 8). The next step is the division of the lower lobe bronchus with endostapler after preliminary inflation of the lung to ensure that the middle lobe bronchus was not closed (Figure 9). Division of the fissure is completed with one or further applications of the stapler (Figure 10). The right lower lobe is removed in an endobag (Figure 11). Haemostasis is checked and one or two chest tubes are inserted to the chest through the transcervical incision (Figure 12). The transcervical incision is closed with approximation of the strap muscles, platysma and skin edges. 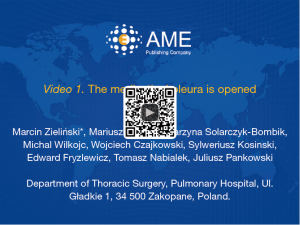 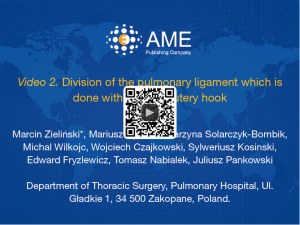 Figure 2 Division of the pulmonary ligament which is done with electrocautery hook (8). Available online: http://www.asvide.com/articles/1358 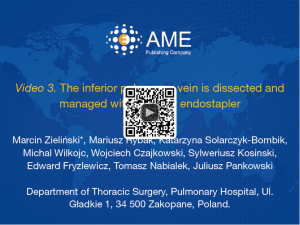 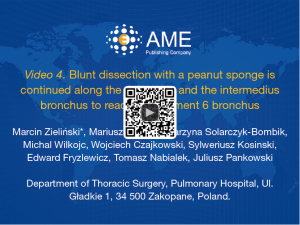 Figure 4 Blunt dissection with a peanut sponge is continued along the right main and the intermedius bronchus to reach the segment 6 bronchus (10). Available online: http://www.asvide.com/articles/1362 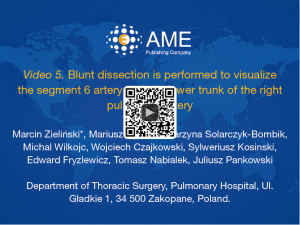 Figure 5 Blunt dissection is performed to visualize the segment 6 artery and the lower trunk of the right pulmonary artery (11). Available online: http://www.asvide.com/articles/1364 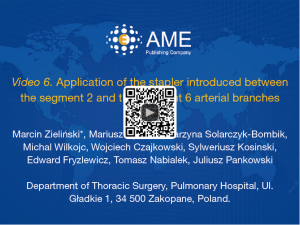 Figure 6 Application of the stapler introduced between the segment 2 and the segment 6 arterial branches (12). Available online: http://www.asvide.com/articles/1365 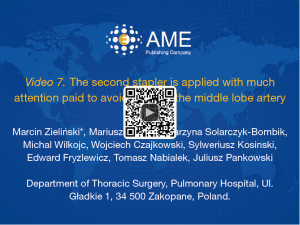 Figure 7 The second stapler is applied with much attention paid to avoid injury of the middle lobe artery (13). Available online: http://www.asvide.com/articles/1366 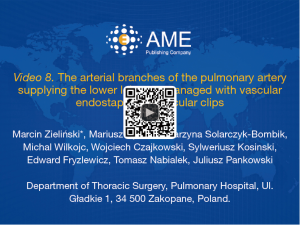 Figure 8 The arterial branches of the pulmonary artery supplying the lower lobe are managed with vascular endostapler, or vascular clips (14). Available online: http://www.asvide.com/articles/1367 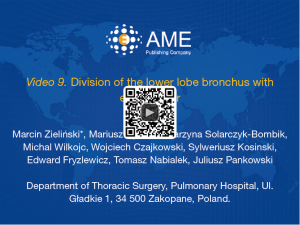 Figure 10 Division of the fissure is completed with further application of the stapler (16). Available online: http://www.asvide.com/articles/1369 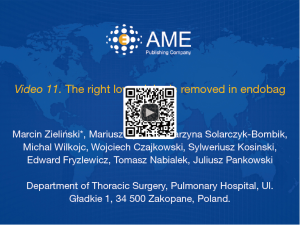 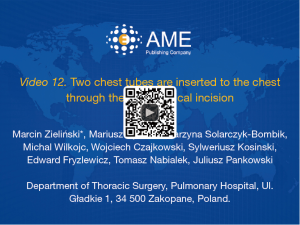 Figure 12 Two chest tubes are inserted to the chest through the transcervical incision (18). Available online: http://www.asvide.com/articles/1371

Starting from February 1st 2016 till July 31st 2016 we made an attempt to perform 9 transcervical uniportal VATS lobectomies. In one patient with left lower lobe tumor we had to convert to uniportal VATS approach due to extensive adhesions located, especially in the area of the left hilum and the aorta-pulmonary window, which were difficult to manage through the transcervical incision. In this patient, we performed VATS uniportal left lower lobectomy. The other 8 patients underwent transcervical uniportal VATS lobectomies. The types of the procedures are shown in the Table 1. In one patient, we performed a bilateral procedure—a right upper lobectomy with a wedge resection of left upper lobe. There were no intraoperative complications. In two patients, there were postoperative complications. One patient who underwent left upper lobectomy suffered the left laryngeal recurrent nerve palsy, which resulted in severe aspiration of the ingested fluid and acute respiratory distress syndrome (ARDS). The patient necessitated ventilatory support for 10 days. The other patient who underwent right upper lobectomy necessitated chest drainage due to pneumothorax. The mean operative time was 258.1 min (200–385 min) for the whole TEMLA procedure with imprint cytology and lobectomy and 168.1 min (110–295 min) for a lobectomy solely.

Introduction of the uniportal approach is probably a final step in development of minimizing of the VATS approach with limitation to only one incision of 3–4 cm. However, there is a disadvantage of uniportal approach which is an intercostal incision, with possible risk of postoperative pain originating from injury of the intercostal nerve. To eliminate this risk the alternative uniportal approaches are currently studied, including subxiphoid and transcervical approaches, both of them avoiding the risk of chronic postoperative pain. Our experience in transcervical and subxiphoid operations assured us that a chronic postoperative pain never occurred in case of these approaches. Regarding the management of postoperative pain in patients undergoing transcervical lobectomies, no epidural or paravertebral analgesia is necessary due to the omission of any intercostal incisions. Our postoperative pain protocol includes treatment with nonsteroid anti-inflammatory drugs occasionally supplemented with narcotic drug injections, if necessary. In patients undergoing standard VATS lobectomy at our institution, we use epidural or paravertebral catheters. Additionally, these approaches provide an opportunity to reach both pleural spaces and resect bilateral lesions during one procedure (2). A unique advantage of the transcervical approach is the possibility of performance of super-extended bilateral mediastinal lymphadenectomy by TEMLA preceding a pulmonary resection, with obtaining the results of the study of nodes intraoperatively. In case of the presence of the metastatic nodes it is possible to discontinue the procedure to avoid a resection in case of positive N2. Technical complexity and long duration of the procedures are disadvantages of the transcervical uniportal lobectomies. However, our experience with this kind of operations is still very limited, so with further progress and standardization of the details of surgical technique it is possible that it becomes easier and faster. Transcervical lobectomy is probably a more difficult technique than a uniportal lobectomy. Therefore, the other possible alternative to combine TEMLA and VATS lobectomy is to perform TEMLA and a typical uniportal VATS lobectomy independently during one anesthesia. It does not seem possible to perform transcervical lobectomy in non-intubated patients as has been proposed recently (19). Probably, more complex procedures as pneumonectomy, sleeve lobectomy, bronchovascular resections, carinal resection and the chest wall resection will not be possible with use of the transcervical approach (20). Currently, the transcervical approach is suitable only for relatively easy cases. However, it must be stressed that it was possible to perform lobectomy also in patients with total obliteration of the pleura space by adhesions.

This paper is our first, preliminary publication on the uniportal transcervical VATS lobectomy. We found that this approach is feasible not only for the upper lobes, but also for the right lower lobe and possible also for the middle and the left lower lobes, as well. Currently, our limited experience does not allow us to draw any further conclusions.

We are grateful to Mr Michael Clark for reviewing the manuscript.

Ethical Statement: The study is approved by the institutional ethical committee and obtained the informed consent from every patient.