Chronic thromboembolic pulmonary hypertension (CTEPH) is a relatively rare disease which occurs in two to four percent of acute pulmonary embolism (PE) cases (1,2). CTEPH is surgically curable and pulmonary thromboendarterectomy (PTE) is the treatment of choice (3). After PTE is performed, the majority of patients are placed on lifelong anticoagulation to prevent recurrent thromboembolism. In this case study, we present a patient with protein C and S deficiency and history of CTEPH who was successfully treated by PTE and returned to normal exercise tolerance after surgery. Unfortunately, she developed intracranial bleeding while on warfarin and presented a challenge in terms of management.

A 44-year-old obese female with a previous history of type 2 diabetes mellitus, protein C and S deficiency, atrial fibrillation and deep vein thrombosis (DVT) presented with progressive dyspnea on exertion and chest pain. At the time of admission, her blood pressure and heart rate measured 150/87 mmHg and 81 beats per minute. One year prior to the current presentation, the patient was treated for an acute PE at an outside institution using the AngioVac system and a permanently placed inferior vena cava (IVC) filter. She was anticoagulated with warfarin. However, her symptoms progressed with worsening dyspnea on exertion. The patient’s physical examination was significant for a systolic murmur, loud second pulmonary heart sound at the left sternal border, jugular venous distension and pedal edema. Her echo confirmed right ventricular dysfunction and pulmonary hypertension. Mild to moderate tricuspid regurgitation with a peak gradient of 50 mmHg was also noted. The CT angiogram (Figure 1) and V/Q scan (Figure 2) were consistent with CTEPH. Right heart catheterization showed a right atrial pressure of 14 mmHg, right ventricular pressure of 70/14 mmHg, pulmonary artery pressure of 70/30/43 mmHg and pulmonary capillary wedge pressure of 16/18 mmHg. After a multi-disciplinary discussion, she underwent PTE and tricuspid valve repair. Her postoperative pulmonary artery pressure was 37/20 mmHg. By postoperative day 3, she walked without dyspnea and had a rapid, uneventful recovery. She was discharged on warfarin. Warfarin was preferred over the newer oral anticoagulation agents because of its reversibility should the need arise (4). The international normalized ratio (INR) has been monitored through standard and international guidelines through a careful multidisciplinary approach. Two months after discharge, the patient presented to the emergency department complaining of headache for 5 days with nausea and vomiting. Her INR was elevated to 3.8 and CT scan showed a subdural hematoma. Warfarin was stopped and she immediately underwent a craniectomy and hematoma evacuation. She made a complete neurological recovery and her cranium was reconstructed three months later. She remained off warfarin or any other anticoagulating agent for 8 months before the neurosurgical team felt comfortable restarting anticoagulation. The INR has been monitored through standard and international guidelines through a careful multidisciplinary approach. A repeat CT pulmonary angiogram at 6 months showed no emboli. The patient is currently asymptomatic. 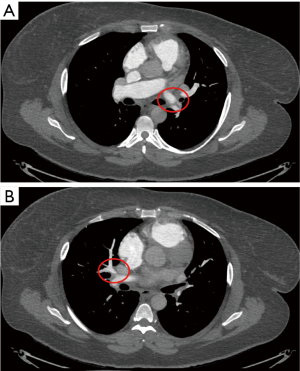 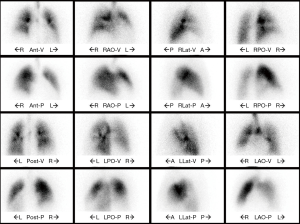 Headache in a patient on warfarin can be an ominous symptom and requires careful assessment including an INR level, CT scan, and full neurological exam. Delay in diagnosis can be catastrophic. In our patient, the subdural hematoma was identified, warfarin was reversed, and a craniectomy was performed due to the underlying brain swelling. Given the devastating neurological event and multiple surgeries, anticoagulation was withheld for an extended time. However, given the protein C and S deficiency, obesity, PE, and atrial fibrillation, she remained a candidate for long-term anticoagulation. This, therefore, was a catch-22 situation and required careful multi-disciplinary monitoring and management.

There is limited evidence or data supporting the use of IVC in the post PTE period (5,6). While there is no direct evidence of a reduced incidence of PE with filter placement in patients who tolerated anticoagulation, the complications of filter placement continue to be highlighted (7). Since there were no documented additional episodes of DVT or PE while anticoagulation was being held, the presence of the previously placed IVC gave the multi-disciplinary team a greater level of comfort in withholding the anticoagulation in this patient. It is our opinion that the use of permanent IVC filters should not be abandoned in CTEPH patients (8).

The preexisting IVC filter and careful monitoring of anticoagulation played a pivotal role in the management of our patient. A heightened awareness of bleeding complications particularly in a patient presenting with headache on warfarin and good multi-disciplinary cooperation were key to the successful management of a tricky catch-22 situation.