Accurate localization of solitary pulmonary nodules (SPNs) has remained a big challenge in lung surgery, especially when the diameter is <15 mm and the nodule is >10 mm under the surface of visceral pleura (1). Computed tomography (CT)-guided percutaneous localization with hookwire or microcoil is one of the most commonly used localization techniques (2). Both hookwire and microcoil have been found to have high success rate and low complication rate in previous studies (3-5). Microcoil placement can also reduce conversion to thoracotomy, operation time, and stapler firings (6). However, unhooking and displacement, among other complications, like pneumothorax, hemorrhage, or dislodgement, do occur (5-8).

In reality, unhooking or displacement of hookwire or microcoil due to technical failures is rather common. Hookwire localization dislodgement rate varied between 3% and 8% in different studies (9-11). The dislodgement rate of microcoil localization, although less common, still reached 1.6% in a previous study (12). Unexpected displacement is of great concern because it may lead to decision dilemma during operations. One option is to close the chest and perform CT-guided localization again. It is time-consuming and rarely done in clinical practice. The other option is to perform tentative extended resections. However, this might lead to loss of more lung function and worsen the patient’s long-term prognosis (13,14). Thus, it is of great importance to find a practical method to avoid conversion to extended resection.

Informed consent was obtained from all patients need localizing from February 2014 to September 2015. The Institutional Review Board of Shanghai Pulmonary Hospital approved this study (IRB No. K16-302). Dislodgement occurred in 18 patients who had undergone preoperative CT-guided hookwire or microcoil placement in our center for localizing SPNs. The indications for metallic mark placement were: (I) the maximal transverse diameter of SPN <30 mm and (II) SPN <40 mm from visceral pleura. The practice of procedures was in accordance with prior reports (9). Upon the completion of marker placement, 0.7 mm CT scan was performed to avoid complications, like massive pneumothorax and metallic marker displacement. Patients in whom dislodgement of localization device occurred during the surgery accepted remedial localization.

The patients were initially intubated with double-lumen tubes after general anesthesia. Conventionally, only one or two incisions are adopted for resections. In cases of uniportal video-assisted thoracoscopic surgery (VATS), the incision is commonly 4 cm at the 4th/5th intercostal space along the anterior axillary line. A second incision is thus needed for camera in cases of two-port VATS surgery at the 8th intercostal space of mid-axillary line.

The remedial localization procedure was initiated when intraoperative dislodgement was seen under the thoracoscope. The core mechanism of this technique was to localize the projection point of nodule on the body surface and visceral pleura using CT series. First, the corresponding body surface projection of the nodule was assessed by reading CT images. Its location was confirmed by the level of CT image and the intersection of intercostals space and certain anatomical lines (such as anterior axillary line, midaxillary line, or midclavicular line, etc.).

After establishing the body surface projection point, a needle was inserted perpendicularly through the chest wall and the insertion stopped at about 0.2–0.5 cm into the chest cavity under direct thoracoscopic monitoring (Figure 1A). The tip of the needle marked the corresponding visceral pleural projection of the SPN when the lung was inflated again (Figure 1B). Subsequently, a burn mark was made with electrosurgical unit on the visceral pleura, which indicated the position of the nodule on the surface of the lung (Figure 1C). The patient was then transited to one-lung ventilation again, and thoracoscopic wedge resection, which included at least 1 cm away from the burn mark(s), was attempted (Figure 1D). Figure 2 showed remedial localization intraoperatively.

Figure 1 Procedure of remedial localization technique. (A) A needle is punctured into the parietal pleura when lung is collapsed; (B) inflate the affected lung again; (C) mark the corresponding visceral pleura with cautery; (D) perform wedge resection of more than 1 cm aside the mark. Figure 2 Procedure of remedial localization technique during operation. A needle was punctured into the chest cavity behind the electrotome (or cautery). The electrotome was going to mark on the visceral pleura. 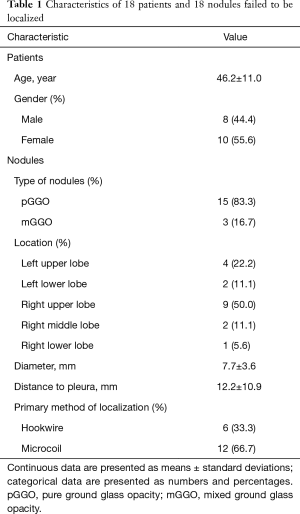 In the present case series, 18 metallic devices dislodged after localizations. In addition to the finding of dislodgement, it was also difficult to locate the primary puncture site on the visceral pleura. Remedial localization and thoracoscopic wedge resections were therefore required. Among these lesions, 6 (33.3%) were initially localized with hookwire and 12 (66.7%) with microcoil. 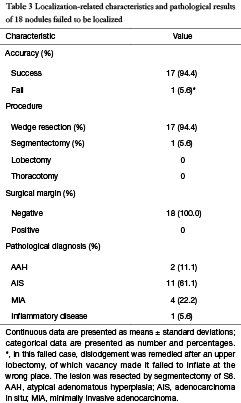 Along with increasing incidence of operable SPNs, it becomes difficult to localize nodules via palpation. A retrospective trial demonstrated that if the diameter of nodules was ≤10 or >5 mm deeper from visceral pleura during VATS, the probability of palpation failure can be as high as 63% (17). Therefore, the technique of localization has evolved from finger palpation to mechanical marking. Currently, several ways of preoperative localization exist. Hookwire localization has high success rate close to 100%, but also has a high rate of complications, such as pneumothorax, hemorrhage, and dislodgement, among others (5,7,9). Microcoil, another metallic localization method, also has a success rate as high as 98.4%, but high complication rates, such as pneumothorax, hemorrhage, and dislodgement, among others, are also common (7,8,12). Similarly, methylene blue staining has a high rate of success. However, the operation needs to be completed within a very limited time, otherwise the dye diffuses and decreases the accuracy of localization (18). Lipiodol marking has a high success rate of about 99%; however, it may lead to complication of pneumothorax (29%), pulmonary hemorrhage (7%), and spillage (2%) (19). Lipiodol injection can also distort frozen section histological specimens, with a possibility for systemic or pulmonary embolization (20). Intraoperative ultrasonography can localize lung nodules even if ground glass opacity (GGO) is present; however, its limitation is that residual air, operators’ experience, and chronic obstructive pulmonary disease can make localization difficult (21,22).

Despite all the progress of localizing methods, big challenges remain under certain circumstances. For example, one of the most popular localization method, CT-guided percutaneous hookwire or microcoil placement, may be associated with dislodgement (9,12). The underlying reasons of dislodgement are (I) wire extraction due to muscle contraction during patient transportation or (II) loose hooking of the pulmonary tissue. Similar situations may occur with the use of microcoils. When the coil is pushed incompletely into the lung tissue, dislodgement may happen, and the coil may drop into chest cavity (3,23). In clinical practice, thoracic surgeons commonly attempt a tentative wedge resection. If it fails to find the nodule in the specimen, conversions to extended resection may be performed. However, segmentectomy or even lobectomy may not be necessary according to the nature of these tiny nodules.

Thus, it is critically important to re-localize the lesion when the primary method fails. Suzuki (17) suggested that when the distance to the visceral pleura exceeds 10 mm and the diameter of SPN is less than 10 mm, it is almost impossible to locate the nodule by palpation. Furthermore, Ciriaco et al. (24) listed indications for preoperative metallic localization, including (I) SPNs in the 1/3 outer side of the lung; (II) nodules <10 mm and/or >15 mm from the visceral pleural surface; (III) nodule diameter >10 mm and/or between 15–25 mm from the visceral pleural surface; and (IV) no pleural indentation sign. If re-localization is not done during VATS thoracotomy, the problem that was present before localization will become problem again. Therefore, it is important for thoracic surgeons to find a method that would serve as a backup for technical failure of mechanical localization. Otherwise, exceeded lung tissue will be resected or incision will be sutured; accordingly, CT-guided localization will be performed again, leading to ethical problems.

The present study described a practical remedial method for intraoperative localizations of small SPNs in cases of hookwire or microcoil failure. Sometimes, the primary puncture can be localized by the evidence of bleeding or injury (3,11). If not visible, a remedial localization is warranted. Kha et al., for instance, re-localized nodules in their study (3,12). Another way of remedy is extensive resection. Thaete et al. performed lobectomies after dislodgement of invisible localization (25). Li et al. performed a conversion to thoracotomy when invisible dislodgement happened (11). Thaete et al. were far-sighted, and conducting methylene blue localization simultaneously with hookwire localization (25).

Our remedial localization is effective. Out of 18 cases that needed remedy, 17 were treated successfully using scheduled resection. Only one failed. There were four lesions in this patient. One in the right lower lobe needs localizing while the other three were in the right upper lobe with no need of localization. Dislodgement was found, and there was no sign of bleeding. Right upper lobectomy was performed first, and wedge resection was performed after remedial localization. However, no lesion was found in the specimen. Then right lower lobe S6 segmentectomy was performed and the lesion was found in the specimen. Localization in this case failed because during the remedial localization, the right lung was inflated at the wrong place owing to the vacancy of the resected right upper lobe. Thus, for cases with multiple nodules, remedial resection should be tried first before resecting a part of the lung. High success rate of 94.4% demonstrates that our localization is favorable and practical.

Our technique has certain limitations. Although the accuracy is acceptable, present method serves only as the remedial technique. CT-guided hookwire or microcoils placement were associated with good observable accuracy. The presence of a metal mark also helps exceeded resections with an obvious target. As a remedy, present technique narrowed down the search area to about one square centimeter, which was still a bigger area compared to the one with metal marks.

Ethical Statement: The Institutional Review Board of Shanghai Pulmonary Hospital approved this study (IRB No. K16-302). Informed consent was obtained from all patients need localizing from February 2014 to September 2015.