Lung Cancer was the most common cause of death from cancer with more than 1.38 million deaths worldwide (1).

The IASLC staging project (2) have shown statistical superiority on patient survival in early pathological stage and with median Overall Survival 95 mos for stage IA, 75 mos for stage IB, 44 mos for IIA, 29 mos for IIB and 19 mos for IIIA. Nevertheless a significant influence factor in OS was the subtype of tumor cells (83 mos for Bronchoalveolar carcinoma, BAC, 45 mos for Adenocarcinoma, ADCA, 44 mos for Squamous, SQUAM, 34 mos for Large cell carcinoma, LARGE and 26 mos for Adenosquamous, ADSQ) (Figure 1). 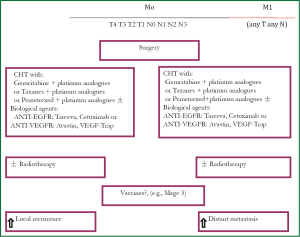 Management of NSCLC according to the extent of the disease

Once histopathological diagnosis is made, if the patients generally consider fit for radical treatment these will undergo surgical intervention. Usually lobectomy or greater resection is recommended rather than sublobar resections (wedge or segmentation). In patients with stage I NSCLC who may tolerate operative intervention but not a lobar or greater lung resection because of comorbid disease or decreases in pulmonary functions segmentectomy/anatomical resection is recommended over non-surgical interventions. Further management will base on initial extent of the disease, postoperative information and on patient preference and decision.

The use of pre-operative or post-operative chemotherapy or radiation therapy in stage I NSCLC is not recommended by small randomized studies.

The meta-analysis over review gave non-clear evidence-based for adjuvant or induction treatment in stage IB patients after radical tumor resection. Only selective patients and patients that are participating in protocols are candidates for further treatment.

The administration of postoperative radiation therapy for the improvement of survival is not recommended in patients who undergo radical resection of stage II tumor with N1 lymph node metastasis [stage II (N1) NSCLC].

In patients who undergo radical resection of stage II tumor and are in a good physical condition, adjuvant platinum-based chemotherapy should be offered between 4th and 8th week following the thoracotomy (adequate wood healing, non residual inflammatory or infectious complications). Patients in stage II, who are not candidates for surgical approaches due to comorbidities (e.g., pulmonary risk factors), could be considered for chemo-radiotherapy strategies.

Patients in stage IIIA1-IIIA2 (3) are usually operated with mediastinal lymphadenectomy followed by platinum-based of adjuvant chemotherapy.

A multidisciplinary management of IIIA3 and IIIA4 patients becomes crucial. Patients with proven N2 involvement (IIIA3 and IIIA4) could be treated by induction chemotherapy followed by surgery followed by platinum-based chemo radiotherapy.

Stage IIIB is typically considered for concurrent chemo radiotherapy approaches. In selected cases surgery will be incorporated within clinical trials.

Until now there is an obscure evidence of a randomized phase III pre-operative trials (Table 1).

Patients of stage IIIB-IV should understand that the treatment goals are the prolongation of life, the palliation of symptoms and the improvement of QoL.

A number of randomized studies compared the overall survival of NSCLC patients in stage IIIB and IV between chemotherapy and BSC and they revealed a real advantage for chemotherapy treatment (Table 2).

Table 2. Randomized clinical trials (including more than 100 pts) of platinum-based chemotherapy plus BSC vs. BSC in advanced NSCLC.
Full Table

In the guidelines of ACCP, ASCO, FNCLCC and the Ontario Program, chemotherapy of advanced stage IIIB/IV pts, should be platinum-based with a new (3rd generation) single-agent. In Table 3 is presented the response in 3rd generation cytotoxic drugs as monotherapy and in combination with platinum analogues (10). In Tables 4-6 are presented the results from Phase I/III studies of 3rd generation cytotoxic agents in combination with older agents. Non-platinum containing chemotherapy may be used as an alternative to platinum-based regimen (Table 7).

Table 3. Results of six new agents in advanced NSCLC as monotherapy and in combination with platinum analogues (Pt) (10).
Full Table 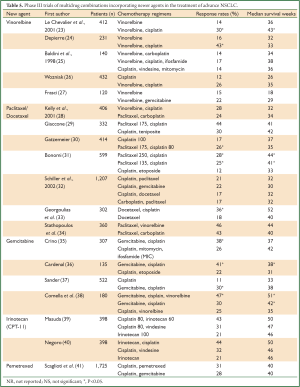 Two randomized trials suggest that the survival benefit that pts receive from chemotherapy occurs in the first three to four cycles. Prolonged therapy may increase cumulative toxicities with insignificant increase in survival rates (42).

Baggstrom et al., have performed a meta-analysis of the published literature comparing platinum-based regimens including a third-generation agent to older standard platinum-based regimens. The new third-generation regimens increased patient survival compared to the older regimens (RR, 1.14; 95% CI: 1.01 to 1.29). There was an absolute increase in the 1-year survival rate of 4% using the newer combination regimens compared to the older regimens (P=0.04) (46).

Treatment according to prognostic and predictive factors

Baseline expression of the TS gene and protein were significantly higher in squamous cell carcinoma when compared with adenocarcinoma (49). Preclinical data indicate that high expression of TS correlates with reduced sensitivity to cytotoxic agent pemetrexed (antifolate) (50). In JMDB study 1,700 primary untreated NSCLC pts of stage IIIB/IV and PS 0-1 were randomized either to cisplatin plus gemcitabine or ciplatin plus pemetrexed given every three weeks up to six cycles. Overall Survival found to be similar for both treatment arms (Median 10.3 mos; HR 0.94; 95%, CI: 0.84-1.05). Nevertheless, analysis of pts by histology showed a statistical significant better OS of non-squamous histology pts in cisplatin + pemetrexed arm compared to cisplatin + gemcitabine arm (11 vs. 10.1 mos) and this difference for those with adenocarcinoma was improved in the pemetrexed arm by 12.6 vs. 10.9 mos respectively (P=0.08). The results of JMDB study indicating a predictive role of tumor histology and cisplatin/pemetrexed has been registered in first line standard therapy in non-squamous NSCLC pts (41).

Progress in understanding cancer biology and mechanisms of oncogenesis has allowed the development of treatment against specific molecular targets, such as epidermal growth-factor receptor (EGFR) and vascular endothelial growth factor (VEGF), which are of special interest in NSCLC.

The most frequently targeted pathways in NSCLC have involved the EGFR and the Vascular Endothelial Growth Factor and its Receptor (VEGF, VEGFR).

The EGFR is a member of ErbB family of transmembrane receptors Tyrosine Kinases (TKs) and plays a major role in the malignant cell phenotype.

The role of EGFR inhibitors in the first line setting as single agents was explored after the failure to show benefit in combination with chemotherapy. In the IPASS trial (51), 1,217 chemo naïve, East Asian with adenocarcinoma histology, never or light smokers pts randomized to receive the EGFR inhibitor gefitinib (G) or carboplatin plus placlitaxel (CP). The trial demonstrating superior PFS in the gefitinib arm compared with CP (HR 0.74; 95%, CI: 0.65-0.85; P<0.0001) and Overall Response Rate (43% vs. 32.2%; P=0.0001) but similar Overall Survival (median mos 18.6 vs. 17.3). Patients with EGFR mutations had the most benefit from gefitinib, with a 51% reduction in progression (HR 0.48; P<0.0001) whereas those pts without EGFR mutation, responded better to chemotherapy (P<0.0001).

Erlotinib inhibits the tyrosine kinase activity of EGFR and has been studied extensively in randomized Phase III trials, yielding promising results, especially as second-line, third line, and maintenance therapy, and in patients with activating mutations of the EGFR receptor.

Angiogenesis place a critical role in tumor development. Anti-angiogenic therapy such as the use of TKIs that block the VEGFR, aims to disrupt existing capillaries that feed a tumor and prevent new vessels from forming around it.

All the including in the two above studies pts were chemotherapy naïve ECOG PS of O or 1 with newly diagnosed stage IIIB/IV and non-squamous NSCLC confirmation.

In the ECOG 4599 study there was a statistical significant improvement even in OS in the arm receiving bevacizumab compared to the control arm (HR 0.79; 95%, CI: 0.67-0.92; P=0.003). Based on the results of ECOG 4599 and AVAiL, the use of bevacizumab is recommended in combination with chemotherapy in non-squamous cell carcinoma (limitations, clinical significant hemoptysis, as controlled, hypertension, therapeutic anticoagulation).

More recently, the BeTa (Bevacizumab/Tarceva) trial (55), investigating the benefits of addition of bevacizumab to erlotinib for second-line treatment of advanced NSCLC, showed a doubling of progression-free survival with combination therapy (3.4 months) as compared with erlotinib monotherapy (1.7 months, P=0.001) but no benefit in terms of overall survival.

In another randomized trial (56), each targeted therapy alone (bevacizumab, erlotinib) compared with their combination and cytotoxic platinum-based chemotherapy alone in previously untreated and advanced non-squamous NSCLC, following by administration of these agents as maintenance therapy.

This randomized study suggests that bevacizumab enhances the activity of chemotherapy but this did not translate into longer overall survival.