Lung cancer is by far the leading cause of cancer-related death with nearly 1.7 million deaths worldwide in 2016. The most common type of lung cancer is non-small cell lung cancer (NSCLC) accounting for 80% of lung cancer cases. Approximately 10% of patients with NSCLC in the US and 50% in East Asia possess mutations in the epidermal growth factor receptor (EGFR). EGFR belongs to a family of receptor tyrosine kinases that can trigger a vast array of signaling pathways leading to cell growth and proliferation. EGFR is normally activated by binding to ligands of the EGF family including EGF and TGF. Ligand binding triggers EGFR homo/heterodimerization and autophosphorylation leading to receptor activation. Oncogenic EGFR mutations usually lead to constitutive activation of the receptor. In NSCLC, the two most common mutations are exon 19 deletion and L858R missense substitution. These mutations result in constitutive EGFR activation, bypass ligand-mediated signaling, and produce uncontrolled cell division.

Tyrosine kinase inhibitors (TKIs) have been found to be active against common EGFR variants. Gefitinib and erlotinib are the first EGFR TKIs approved for treatment of EGFR-mutation positive NSCLC (1). They are effective against L858R and exon 19 deletion. Both are reversible competitive inhibitors of ATP for the tyrosine kinase domain of EGFR. They bind to the ATP binding site of EGFR, and their binding to mutant EGFR is stronger than to the wild type receptor (Figure 1A). However, drug resistance can quickly arise due to secondary mutation of T790M. T790 is located at the bottom of the ATP binding site and close to the adenosine moiety of ATP. Mutation of T790M increases the affinity of the mutant receptor for ATP (2). Osimertinib is an irreversible EGFR inhibitor developed to target the T790M mutation. It is highly active against the T790M mutant due to covalent bonding between its Michael acceptor group and C797 at the edge of the ATP binding pocket (Figure 1A). However, its efficacy can be compromised by acquired C797S mutation (3). This mutation prevents the formation of a covalent bond and leads to new drug resistance. Currently, there is no targeted therapy available to treat this mutation, calling for new therapeutic agents. 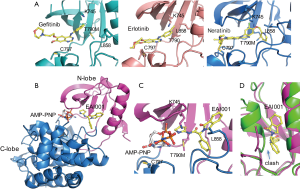 In 2016, new EGFR inhibitors that can overcome the resistance of T790M and C797S mutations were reported in Nature (4). These inhibitors were identified from screening 2.5 million compounds against the T790M/C797S mutant. The screen was carried out in the presence of high concentration of ATP (1 mM) and then counter-screened against wild type EGFR. This strategy aimed to identify compounds that were potentially non-ATP-competitive and mutant selective. Non-competitive inhibition is ideal for targeting EGFR T790M mutant because ATP affinity augmented by the T790M mutation can be undermined. Additionally, targeting an allosteric site rather than highly conserved ATP binding site has the potential to result in highly selective inhibitors. Initial screening identified an inhibitor (EAI001) with an IC50 of 25 nM at 1 mM ATP. Further medicinal optimization yielded a more potent inhibitor with an IC50 of 3 nM (EAI045). EAI045 displayed ~1000-fold selectivity over wild type EGFR and excellent selectivity over a panel of 250 protein kinases. Safety pharmacology studies revealed EAI045 also has excellent selectivity against non-kinase targets.

A following crystal structure study of T790M-mutant EGFR in complex with EAI001 has provided insight into inhibitor selectivity and the mechanism of action (4). The structure showed that the compound binds in an allosteric pocket adjacent to the ATP binding site (Figure 1B). The compound binding does not affect ATP binding, as an ATP analogue (AMP-PNP) was found to bind in the expected manner in the active site pocket. The compound binds as a ‘three-bladed propeller’ in the allosteric site. Mutant selective activity is apparently due to direct contact of the aminothiazole group of the compound with the mutant gatekeeper methionine residue (T790M) (Figure 1C). Another contribution to the selectivity may be due to steric effects of wild type EGFR because the activation loop in the inactive state may interfere with the compound binding to the allosteric site (Figure 1D). A similar site was found in MEK1, but in contrast to homologous ATP binding sites these allosteric sites are less conserved and structurally different. This difference may help to explain excellent selectivity of the compound against other kinases. It remains unclear how the binding of the compound to this site inhibits kinase activity. One possibility is the direct interaction of the compound with Lys745 (Figure 1C). Lys745 is absolutely conserved across all kinases and essential for phosphotransfer in catalysis. Even a conserved lysine to arginine mutation is sufficient to abolish the activity (5). It also remains unclear what is the physiological role of this allosteric site. One possibility is that the site could provide a space to accommodate posttranslational modifications that may regulate the kinase activity. Interestingly, WHSC1L1-mediated EGFR mono-methylation at Lys745 enhances the cytoplasmic and nuclear oncogenic activity of EGFR in head and neck cancer (6). Of note, the analogous site in MEK1 has also been exploited by a number of allosteric inhibitors, further suggesting a possible regulatory role for this allosteric pocket.

However, biochemical activity of EAI045 did not translate into anti-proliferative effects in cancer cell lines. EAI045 was not effective even with concentrations as high as 10 µM. In the absence of EGF ligand, EAI045 was able to completely inhibit EGFR autophosphorylation, but in the presence of EGF, the maximum inhibition potency was only up to 50%. This observation led to a hypothesis that EAI045 cellular sensitivity was due to two distinct EGFR populations, inhibitor-sensitive and insensitive. EGFR undergoes asymmetric dimerization when bound to a ligand. Two distinct EGFR populations with different accessibility to the allosteric site could be created by this asymmetric dimerization (4). To test this hypothesis, the synergistic effect of cetuximab and EAI045 was examined in NSCLC cancer cell lines. Cetuximab is a therapeutic antibody that prevents EGFR dimer formation. In the presence of cetuximab, EAI045 was remarkably effective with an anti-proliferative potency similar to its biochemical potency. This synergistic effect was also observed in L858R/T790M and L858R/T790M/C797S mutant mice. The mice treated with EAI045 alone did not respond, mice treated with cetuximab alone had a modest response, but the combination of EAI045 and cetuximab reduced tumor volume by over 50%.

Allosteric targeting of EGFR offers promise for NSCLC patients with L858R/T790M/C797S mutations. The new EGFR inhibitor EAI045 could also prove clinically effective against NSCLC due to its high potency and selectivity. However, we should always be aware of that new forms of resistance could arise, as we have already seen that drug resistance continues to evolve and bypasses all currently approved EGFR-based drugs. Indeed, any treatment designed for specific mutations is desirable, but with a host of reported mutations and deletions in EGFR, selectively targeting the EGFR mutant may eventually become too complicated. While understanding how a mutation confers resistance is absolutely essential for development of targeted treatments, therapeutic genome editing could be an ultimate approach in overcoming the mutation-induced drug resistance leading to a cure (7).