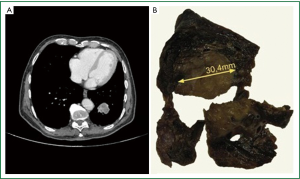 Microscopic examination revealed a proliferation of densely packed mesenchymal neoplastic spindle cells arranged in bundles and dispersed in a fibrillary stroma. The cells in part showed atypical, hyperchromatic nuclei. Mitotic index measured approximately 18 mitosis ×10 high-power fields. Necrotic areas were also recorded. We also undertook a cytogenetic analysis by FISH (Fluorescence in Situ Hybridization) to detect chromosome 18 (SYT) rearrangements in order to exclude the diagnosis of synovial sarcoma. The quality of the FIG. 1b is very poor. It is a black and white Photo, but I sent you a colour Photo, where The tumoral lesion is clearer. The specimen showed an immunohistochemical (1) positivity for Vimentin and S-100; moreover, focal positivity of EMA has also been observed. Finally, the tumor was negative for TTF1, CK7, CD99, HMB45, MART-1, Desmin, panCK, ActinaML, CD1a, CD21, CD23, CD34, and Bcl2 (Figure 2). The final diagnosis was grade 3 MPNST according to the FNCLCC system with a total score of 6 (mitotic score =2; necrosis =2, tumor differentiation score =2). Currently, after two years, the patient is alive without signs of recurrent disease. 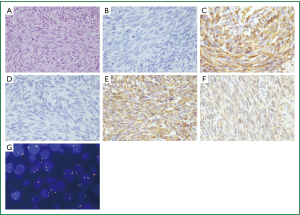 MPNSTs are a very rare tumor, with an incidence of 1 per 1,000,000 and representing between 3% and 10% of all soft tissue sarcomas (2). A combination of gross and microscopic findings supported by immunohistochemical and molecular studies is commonly needed to diagnose MPNSTs.

Overall, primary pulmonary sarcomas (PS) are encountered in less than 1% of primary lung tumors; in particular, they represent about 40% of ‘rare’ pulmonary neoplasms and 9% of all soft tissue sarcomas (3). MPNSTs occur mainly in early childhood and in young adults (4). In a series of 146 Japanese patients with tumors of nerve sheath origin, only one case of benign schwannoma was observed in the lung (5). The incidence of MPNST in the general population is 0.001%; however, it increases to 5-42% in patients with type 1 neurofibromatosis (NF1) (2). Clinical symptoms are usually similar to those observed in bronchogenic carcinomas, presenting with chest pain and cough generally occurring in the middle age with a slight predominance in males (3).

Reportedly, 5-year survival rates vary from 15% to 40% and patients with NF1 have generally a poorer prognosis. Other adverse prognosticators are tumor size greater than 5 cm, mitotic rate greater than 20×10 HPFs, central location and incomplete resection. MPNSTs are associated with high local recurrence rate. Moreover, distant metastases develop in more than one half of patients. Lungs, bones, pleura and liver are commonly involved with diffusion via the meningeal route also being possible. Cytogenetic studies have shown complex clonal abnormalities in most cases (3).

In the differential diagnosis, pulmonary metastases from extrathoracic mesenchymal tumors should be ruled out. However, the distinction from other primary sarcomas of the lung is still very difficult. In particular, the MPNSTs have to be distinguished from other mesenchymal malignant neoplasms (such as synovial sarcoma and leyomiosarcoma) especially in cases, like ours, when aberrant EMA expression is observed. In this context, the resort of immunohistochemistry is not helpful and molecular characterization is needed for a correct diagnosis (6). In order to obtain local control, malignant mesenchymal tumors could be approached surgically with satisfactory results as in our patient.

Written informed consent was obtained from the patient for publication of this case report and accompanying images. A copy of the written consent is available for review by the Editor-in-Chief of this journal.