In the past 10 years, convex-probe endobronchial ultrasound (CP-EBUS) has become the procedure of choice for mediastinal lung cancer staging (1). This procedure is widely used for evaluation and diagnosis of mediastinal abnormalities such as lymphoma, sarcoidosis, vascular abnormalities and other tumors (2-4). Recently, the therapeutic role of EBUS is cautiously emerging with few reports of its use in placing fiducial markers for central pulmonary nodules to guide stereotactic body radiation (5,6) and for local injection of chemotherapeutic agents to treat lung cancer (7-10).

Photodynamic therapy (PDT) has been approved for the treatment of non-small cell lung cancer (NSCLC) for over 15 years (11,12). In PDT, systemic administration of a light sensitive drug (i.e., photosensitizer, PS) is followed by illumination of the target tissue with visible light that leads to the generation of reactive oxygen species, notably singlet oxygen (13). This results in the destruction of the tumor by a combination of direct cellular and vascular effects (14). Typically, PDT is accomplished with external beam illumination, or endobronchial photodynamic therapy (EBPDT) (11,12). However, EBPDT is effective in treating cancerous tumors that are smaller than 1 cm (15-18). Interstitial photodynamic therapy (I-PDT) is required to effectively illuminate tumors that are larger or deeper than >1 cm (19). In I-PDT, treatment laser fibers with cylindrical diffuser are inserted into the target tumor through a needle or catheter. The response to I-PDT depends on the light dose that is delivered to the target tumor and margins (20). Image guidance is a key element in administering I-PDT. While intraoperative computed tomography (CT) and standard ultrasound have been used to guide fiber placements for I-PDT to treat other cancers (20,21), CP-EBUS has not been previously described for guiding I-PDT in lung cancer.

In this paper, we used phantom, animal models to describe the use of EBUS with transbronchial needle for the insertion of the laser fibers into tumors. We used computer simulations to demonstrate the propose implementation of this new technique in the treatment of locally advanced lung cancer.

Description of the technique

The objective of this experiment was to evaluate the use of the EBUS needle to place the laser cylindrical diffuser in a solid model. Since the mechanical properties of the tumor tissue are most likely to affect the placement, we utilized a solid phantom model that mimics the mechanical properties of soft tissue (Ballistic gel, Clear Ballistics LLC, Fort Smith, AR), as previously described (22). A 21-gauge EBUS needle (NA-201SX-4021; Olympus, Tokyo, Japan) was inserted into the phantom model. After cleaning the EBUS needle tip, the stylet was withdrawn, and a 0.5 mm in diameter optical fiber (RD250 Medlight SA, Ecublens, Switzerland) was passed through the needle. The EBUS needle, with the fiber, was pushed to a distal target region in the phantom. Thereafter, the needle was withdrawn to expose the cylindrical diffuser end of the optical fiber. On the other end, the optical fiber was connected to a diode laser that was used as a light source for delivering laser light from the cylindrical diffuser end to the phantom (Figure 1). 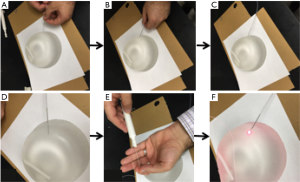 Figure 1 A solid phantom is illuminated with a cylindrical optical fiber inserted into the phantom with an endobronchial ultrasound transbronchial needle. The order (A-F) is to show the consecutive steps used to insert the fiber into the phantom.

The purpose of this experiment was to test the echogenicity of the laser fiber in vivo. To that end, we conducted a pilot animals study. The Institutional Animal Care and Use Committee (IACUC) at Roswell Park Cancer Institute (RPCI) approved all of the procedures, prior to the experiments.

Five female mice (C3H) bearing SCCVII tumors and two New Zealand White rabbits bearing VX2 tumor were used to assess the feasibility of guiding the RD250 fiber through a 21 gauge EBUS needle (NA-201SX-4021; Olympus, Tokyo, Japan) and 19 gauge needle endoscopic ultrasound (EUS) (Echo-19, Cook Medical, IN, USA), respectively. The linear probe of the ultrasound (Vevo 2100, VisualSonics, Toronto, Canada) system (for the mice) and the curvilinear ultrasound probe of a curved linear array EUS (for the rabbits) were used for real-time ultrasound guidance. Each mouse and rabbit was anesthetized, using isoflurane by inhalation, and placed on a small solid platform in a decubitus position with the tumor upward. The tumor was covered with a water-based gel and the ultrasound probe was placed in contact with the tumor.

The 21 gauge EBUS needle for the mice and 19-gauge EUS needle for the rabbits was inserted into the tumor under real-time ultrasound guidance. The stylet was withdrawn after cleaning the tip of the needle, and the 0.5 mm in diameter optical fiber (RD250 Medlight SA, Ecublens, Switzerland) was passed through the needle and into the tumor (Figures 2,3). The optical fiber was clearly visualized inside the tumor as shown in Figures 2B,3C.

Figure 2 Mouse experiment. (A) An anesthetized mouse imaged with an ultrasound during interstitial photodynamic therapy; (B) real-time ultrasound image showing the optical fiber (arrow) inside the tumor.

Figure 3 An anesthetized New Zealand white rabbit bearing a large, subcutaneous VX2 tumor was used to elucidate the use of the EBUS to guide a needle insertion and image the fiber. (A) The setup of the EUS with the laser fiber; (B) the tumor is illuminated with 630-nm laser light (for the clinically approved PS) with a RD250 fiber inserted through the EBUS needle. A light dosimetry fiber was inserted in a catheter (red arrow); (C) a picture of the EBUS display shows the laser fiber in the tumor.

We demonstrated that clinical grade laser fibers with cylindrical diffusers can be inserted through a 21-gauge EBUS needle and 19 gauge EUS needle and can be visualized under real-time ultrasound inside the tumor. We suggest that the I-PDT would be conducted with the clinically approved PS (Porfimer Sodium, Photofrin, Pinnacle Biologics, Chicago, IL), or Chlorin e6, a second generation PS that is associated with very short photosensitivity (1–2 days), and need to be administered only 2–4 h prior to PDT. This PS has shown promising results in the treatment of 42 patients with stage IIIa and IIIb, comparing PDT with Chlorin e6 complex (Radachlorin®; Rada-Pharma, Russia) prior to standard chemotherapy to chemotherapy alone. The neoadjuvant PDT was found to be safe and effective in converting inoperable tumors to operable (23). Another version of this PS (Fotolon, Apocare Pharma, GmbH, Bielefeld, Germany) is being evaluated in a clinical study for NSCLC in Germany (EudraCT ID: 2013-001876-39).

Recent advancements in computer simulations enable near real-time planning and dosimetry, during I-PDT (24-29). We have demonstrated that finite element modelling (FEM) approach can be used to simulate light propagation in geometries that mimic the anatomy of locally advanced tumors (22,24). A detailed description of this approach is provided in Oakley et al. 2015 (24). Briefly, an image visualization and analysis software package (Simpleware, Exeter, UK) is used to segment tumor, adjacent normal tissues, blood vessels and other important anatomical features. The segmented scans are reconstructed to create a 3-dimensional (3-D) model that is imported into a FEM software package (Comsol Inc., Burlington, MA). The FEM, with appropriate boundary and initial conditions is used to calculate the light propagation in the 3-D model. In our laboratory, we produced a simulation that was conducted on a model that was created from de-identified chest CT scan of a patient with locally advanced NSCLC (Figure 4). The de-identified scans were obtained with approval from the RPCI Office of Research Subject Protection. This was a proof of concept simulation to assess the possibility of delivering sufficient light dose to a tumor that could be amenable for EBUS guided I-PDT. The parameters used in this simulation are given in Tables 1,2. 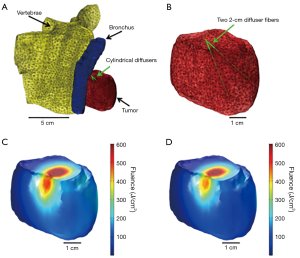 Figure 4 Three-dimensional simulation. (A) A 3-dimensional reconstruction and meshing of the vertebrae, bronchus and tumor used in the computer simulations; (B) a close up of the meshed tumor showing the RD250 fibers; (C,D) the light dose distribution for 630 and 665 nm, respectively, within the tumor, at 1,500 seconds. 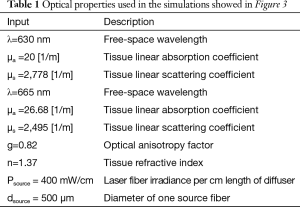 Therefore, we suggest a treatment modality using EBUS guided I-PDT for locally advanced NSCLC, as a new interventional concept that could be considered for evaluation in future phase I/II clinical studies.

Funding: This work was supported in part by National Cancer Institute of the National Institutes of Health under Award Number R01 CA193610 to G Shafirstein.