Along with breast and colorectal, lung cancer still represents one of the most frequently diagnosed malignancy worldwide, often affected by poor prognosis (1). Despite this, the advent of the targeted drugs has been modifying this serious scenario. However, to fully achieve the ambitious goal of a “personalized” treatment in daily clinical practice, it is mandatory to deveop companion diagnostics, able to trace “druggable” targets in individual cancer patients, throughout the continuum of the care.

In non-small cell lung cancer (NSCLC), 3–7% of patients show echinoderm microtubule associated-protein like 4-anaplastic lymphoma kinase (EML4-ALK) translocation and could be treated with anaplastic lymphoma kinase (ALK)-inhibitors. However, under crizotinib, a first-generation ALK-inhibitor, patients develop drug resistance after a median of 12 months. To overcome crizotinib resistance, several next-generation ALK inhibitors have been developed, including, among others, ceritinib, alectinib, brigatinib and lorlatinib (2). In the USA, the therapeutic decision after detecting new lesions in patients receiving crizotinib varies depending on their location and extent (3). In NSCLC, liquid biopsy allowed important improvements in the detection of the epidermal growth factor receptor (EGFR) mutation (4,5). The ability of liquid biopsy to detect the oncogenic gene/protein fusions is a newly investigated field, and is not routinely applied as of yet.

In December 2014, a 70-year-old man, heavy smoker, was hospitalized because of acute pain in the dorsal region. He was diagnosed with a thoracic-abdominal aortic aneurysm. Furthermore, in February 2015, a CT-guided pulmonary biopsy was performed because of multiple pulmonary lesions, and documented a poorly differentiated adenocarcinoma G3, TTF1 pos, p63 and CK6 neg. The molecular characterization reported an EGFR wild type, ALK-rearranged tumor specimen.

With the consent of vascular surgeons, we planned a first-line treatment with carboplatin (AUC 4) and pemetrexed with custom reduction of 75% of the standard dose (375 mg/m2) every 21 days; 3 cycles were tolerated quite well, although we documented anemia (G2) and thrombocytopenia (G1) at the end of the second cycle.

The CT evaluation, on June 2015, documented a progressive disease (PD) of the lung, mediastinal lymph nodes and adrenal metastases, so we proposed a second-line treatment with crizotinib (250 mg BID).

The following CT evaluation (October 2015) showed further PD of the lung, mediastinal lymph nodes and adrenal metastases. Moreover, the excision of a subcutaneous nodule of the right mammary gland demonstrated its metastatic origin from the primary NSCLC. We therefore discontinued crizotinib therapy and ceritinib was required for compassionate use.

After 3 months of ceritinib (750 mg/day), the CT evaluation (February 2016) showed further lung PD, so we proposed a personalized posology and weekly schedule of docetaxel. The patient died in April 2016.

The patient underwent 4 cycles of cisplatin (75 mg/m2) plus pemetrexed (500 mg/m2), every 21 days. The treatment was well tolerated, except for abdominal pain (G2). We documented an initial benefit on coughing.

The CT evaluation (May 2016) documented a stable disease (SD) according to RECIST criteria; hence we planned pemetrexed as maintenance treatment (6 cycles).

At the following evaluation (September 2016), we documented clinical and radiological PD. Based on the molecular characterization of the primary tumor (ALK-rearranged), the patient underwent crizotinib, showing rapid improvement. The treatment has been maintained until now, although the dose was reduced (April 2017) at 250 mg/die, because of neutropenia (G2) and increase of transaminase level (G1).

EpCAM low/neg cells were collected downstream of the CellSearch processing, using a 5 µm-pore micro-sieve membrane (VyCAP, Deventer, The Netherlands), as previously described (9). The cells on micro-sieve were stained using a cocktail of fluorescently labelled antibodies, namely: FITC-conjugated detecting CK1-10, 13-16, 18, and 19 (AE1/AE3, eBioscience; C11, ACZON; CK7 and -14, Millipore), APC-conjugated anti-CD16 and -CD45, and DAPI for nuclear staining (Invitrogen, Carlsbad, CA, USA). The anti-ALK antibody (AbCam) was also included to detect rearranged cells. Cells were scored as DAPI+CK+CD45−CD16− and ALK+/−, with a minimum cell size of 4 µm × 4 µm, and a nucleus occupying at least 50% of the CK+ cytoplasm.

Reactions were performed in a 20 µL reaction mix containing 1× droplet PCR supermix, 20 U/µL Reverse Transcriptase, 15 mM DTT, 250 nM of each probe, 900 nM primers and 5 µL of cell-free circulating RNA. Droplets were generated and analyzed using the QX200 system (BioRad). Amplifications were performed using the following conditions: 1 cycle of 50 °C for 60 min, 1 cycle of 95 °C for 10 min, 40 cycles of 95 °C for 30 seconds and 55 °C for 1 min, 1 cycle of 98 °C for 10 min (ramp rate set to 2 °C per second). Positive-, negative- and no template- controls were included in each run, at least in two replicates. The data were acquired and analysed by QuantaSoft analysis software version 1.7.4 (BioRad).

Both patients (Figures 1,2) received initial platinum-based doublet (CBDCA plus PMTX, and CDDP plus PMTX respectively) chemotherapy (Figures 1A,2A, dotted purple arrow) followed by crizotinib at the time of first documented PD (Figures 1A,2A, continuous purple arrow), because of a documented ALK rearrangement in the primary tumor (Figures 1A,2A, continuous blue arrow). We analyzed EpCAM+ and low/neg CTCs and cfmRNA before the start of chemotherapy (t0) and throughout treatment (subsequent time points), in order to test their potential use as predictors of treatment effectiveness. In the first patient, we repeatedly observed the presence of EpCAM+ CTCs (Figure 1A, green line, EA; t0, t2 and t3) that were partially ALK+ (Figure 1B, t2 and t3). Furthermore, high numbers of EpCAM low/neg CTCs were detected from t0 to t3 (Figure 1A, red line), with ALK+ CTCs ranging from 25% to 44% of this subpopulation (Figure 1C). Conversely, the EpCAM+ CTC SA did not detect any cells at t0 and t1 (Figure 1D). 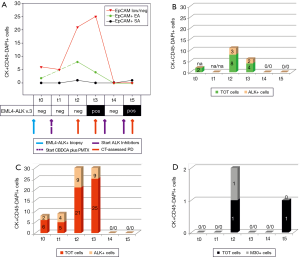 At t2 and t3, after three cycles of CBDCA plus PMTX, when PD was documented by imaging (Figure 1A, red arrow), we found the highest number of EpCAM+ and EpCAM low/neg CTCs, with an ALK+ fraction in both subpopulations (Figure 1B,C). Moreover, at t3 we could reveal for the first time the presence of EML4-ALK cfmRNA (Figure 1A). EpCAM+ SA CTCs were found at t2, when 1 out of 2 cells was apoptotic (M30+) (Figure 1D).

When the patient started crizotinib (t4), EpCAM+ and EpCAM low/neg cells immediately disappeared (Figure 1A, first continuous purple arrow). However, in October the CT revealed a further PD (data not shown), hence the patient switched to ceritinib (Figure 1A, second continuous purple arrow). At t5, we observed a persistence of viable EpCAM+ CTC SA and EML4-ALK cfmRNA (Figure 1A,D, respectively); at this late time point, EpCAM+ EA and EpCAM low/neg were undetectable. The patient rapidly progressed and died in April 2016.

The second case was a never smoker woman, diagnosed with an ALK-rearranged adenocarcinoma (Figure 2A, blue arrow). At baseline (t0), we only observed an EpCAM+ ALK− CTC, with the EpCAM low/neg fraction and cfmRNA being negative. After 4 cycles of CDDP plus PMTX, we noticed that EpCAM+ CTCs had disappeared (Figure 2A,B, EA and SA) while both EpCAM low/neg ALK− CTCs and EML4-ALK cfmRNA were detected (Figure 2A,C, t1). Imaging screening highlighted SD and the patient was treated with pemetrexed only (Figure 2A, second dotted purple arrow). At the subsequent time points, we observed the following: 1 EpCAM low/neg ALK− CTC (t2), EML4-ALK cfmRNA (t3), all markers negative at the last time point (t4). To date, the patient is still showing SD.

In ALK-rearranged NSCLC patients, several studies focused on assessing which liquid biopsy marker could be used to detect ALK fusion gene/protein and, in patients treated with ALK TKIs, the onset of resistance.

Consistently with previous reports in other malignancies (11,12), both our case studies demonstrated here that chemotherapy induces the release into circulation of EpCAM low/neg CTCs after only a few cycles. Notably, EpCAM down-modulation is considered the first step in epithelial to mesenchymal transition (EMT), an evolution toward a more aggressive tumor phenotype implicated in resistance to chemotherapy.

In the first case, we found a persistence of ALK+ CTCs in both EpCAM+ and EpCAM low/neg cellular subsets. After starting ALK TKIs, all the CTC subpopulations disappeared, but shortly after, we could detect EML4-ALK cfmRNA and a viable EpCAM+ cell. As suggested by Pailler et al. [2017] (13) the presence of ALK-CTCs after crizotinib is a sign of emerging drug resistance which involves the alteration of pathways other than ALK. Indeed, in our first case EpCAM+ CTCs reemerged after crizotinib and ceritinib, a second generation of ALK TKIs, corresponding to a sudden PD and a worsening of the patient’s conditions. Conversely, in the second patient, we obtained a satisfying stabilization of the disease. In this case, we found CTCs only in the earlier time points. Furthermore, consistently with the imaging documented SD, when the patient was treated with ALK TKIs, we did not observe any CTC subpopulation and EML4-ALK cfmRNA was undetectable.

These two cases are paradigmatic and well depict the heterogeneity in ALK TKIs response observed in clinical practice (14). By combining the biomarkers here proposed, we demonstrated that it is possible to follow the response to treatment and the development of putative drug-resistance mechanisms, to better highlight high-risk patients.

Further in-depth analysis of these biomarkers could open a window onto the cancer behavior and to tailor new therapeutic strategies.

We thank Prof. Giuseppe Opocher, Scientific Director of the Veneto Institute of Oncology, IOV-IRCCS, for the new lab facilities provided for the CTC-group at the Institute of Pediatric Research Città della Speranza, IRP, Padova.

Funding: This work was supported by the Italian Ministry of Health (Proposal No: #GR-2010-2303193A “Individualized treatments of patients with advanced NSCLC: potential application for CTCs molecular and phenotypical profiling” to E.R.); and Intramural 5X1000 SINERGIA CTC/cfDNA IOV to R.Z. The work of M Manicone and MC Scaini was supported by IMI [115749] CANCER-ID.

Ethical Statement: The protocol for this research project has been approved by the Ethics Committee of the institution within which the work was undertaken and it conforms to the provisions in accordance with the Helsinki Declaration as revised in 2013 (CE IOV: 2012/52, 24 September 2012) and written informed consent was obtained from the patient for publication of this manuscript and any accompanying images.