Postoperative pain in thoracic surgery: re-evaluating the benefits of VATS when coupled with epidural analgesia

Video-assisted thoracic surgery (VATS) is generally considered to be a less invasive and painful approach than open thoracotomy (1-4). In particular, complete video-assisted thoracoscopic surgery (cVATS) employing small ports is the least invasive procedure, to the extent that patients who undergo cVATS rarely suffer from postoperative pain (2,3). However, it has been reported that only short-term advantages of cVATS lobectomy, such as a shorter length of hospitalization, are obvious compared to open lobectomy, whereas long-term advantages are not confirmed or even negated (1,4-6). In reality, patients treated with open thoracotomy do not always complain of severe postoperative pain (7), and vice versa with cVATS patients. Regardless, postoperative intercostal neuralgia generally resolves within a few months post-surgery (7).

Since the recent development of many versatile surgical devices that can be inserted through small incisions, even major lung resection can be performed safely via smaller thoracotomy compared to resections performed 20 years ago (1-4). Coupled with this advance, however, significant progress has been made with analgesic technology as well (7,8). It would therefore be meaningful to re-evaluate the use of cVATS to reduce postoperative pain against the effectiveness of today’s analgesic technology. To this end, we conducted a prospective comparative study of the degree of acute postoperative pain between (I) cVATS without epidural analgesia (EA) and cVATS with EA and (II) cVATS with EA and open thoracotomy with EA.

The study protocol was examined and approved by the Research Review Board at St. Mary’s Hospital on 15 July 2016 (approval number #16-0606). Before completion of the questionnaires, written consent was obtained from all patients.

From November 2013 to June 2015, a questionnaire about postoperative pain was distributed to surgical patients at St. Mary’s Hospital after obtaining informed consent. The subjects of this study were 62 patients who agreed to answer the questionnaire. Of the 62 patients, 49 were male and 13 were female, and the mean age was 54.8 years (range: 14 to 88 years). The underlying disease was pneumothorax in 36 patients, lung cancer in 17 patients, benign lung tumors in seven patients and thymoma in two patients. Partial lung resection was performed in 42 patients, lobectomy in 18 patients and thymectomy in two patients. The surgeries were performed using cVATS with two 15-mm ports and one puncture port in 31 of the 62 patients. Open thoracotomy was performed on the remaining 31 patients, involving anterolateral thoracotomy with muscle sparing, using thoracoscopy. The mean length of the incision during open thoracotomy was 16.4±4.8 cm (mean ± standard deviation).

All surgeries were performed under general anesthesia: propofol (1–2 mg/Kg), fentanyl (4–8 µg/Kg), and rocuronium bromide (0.6 mg/Kg) were administered for induction of anesthesia, and remifentanil (0–0.3 µg/Kg) was continuously injected for maintenance of anesthesia. Anesthesiologists attempted to insert an EA catheter in all patients. However, insertion failed in some patients due to complications arising from the patients’ conditions. To minimize operation time in these cases, an intercostal nerve block with 0.75% ropivacaine hydrochloride (20 mL total per person) was carried out intraoperatively by surgeons instead of EA. In the remaining cases, continuous EA with 0.2% ropivacaine hydrochloride was employed postoperatively, administered at 2–6 mL/h through the epidural catheter using a regional analgesia infuser system (Baxter INFUSOR Multirate; Baxter International Inc., Deerfield, IL, USA) (9). All EAs were removed on postoperative day 3 or later, and all patients were orally administered a 60-mg tablet of loxoprofen three times a day post-surgery. If patients complained of post-surgical pain, we allowed nurses to independently assess the patients’ conditions and administer an additional 60-mg tablet of loxoprofen without restriction. However, the total number of times additional analgesia was administered in each group was so insignificant that we did not consider this factor in the current study.

It should be noted that opioids are rarely used for acute postoperative pain outside of cancer-related pain because of strict regulations concerning opioid usage in Japan. In addition, according to our personal experiences, young patients often suffer from nausea, sometimes vomiting after even small doses. For better control of postoperative pain, we now employ EA with patient-controlled analgesia (PCA); however, PCA was not used at our institution at the time of this study.

The patients were questioned about their postoperative pain three times per day in the morning, afternoon and night—mainly at the time of meals—from postoperative days 1 through 3. The patient assessed his/her degree of pain using a visual analog scale ranging from 0 to 10. The numerical pain data were then analyzed using Student’s t-test or the Cochran-Cox test after the F-test for equal variances, employing the StatMateIII software program (ATMS Inc., Tokyo, Japan). A P value of <0.05 was considered to be statistically significant.

There were significant differences between the open thoracotomy with EA group and the other two groups in terms of the mean age, length of operation, duration of postoperative thoracic drainage and duration of postoperative hospitalization (Table 2). No significant differences were found between the cVATS without EA and the open thoracotomy with EA groups in terms of intraoperative blood loss, despite the large difference in the median value (2 vs. 18 g, respectively), but it should be noted that a case of hemopneumothorax with 1000 g of blood loss was included in the former group. 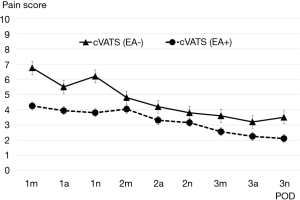 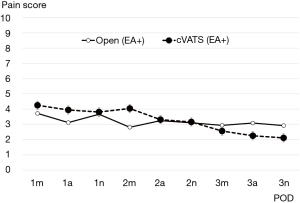 Analyzing our results midway through the study, we decided to discontinue the cVATS without EA group to avoid unnecessary detriment to the patients. Therefore, the number of patients in this group capped at a relatively small total compared with the other two groups. EA was generally employed at our institution; however, it was sometimes omitted in unavoidable circumstances. Such patients were eventually categorized into the cVATS without EA group. Currently, however, we always attempt to insert the EA catheter or apply another appropriate measure to reduce the patient’s postoperative pain if EA is not given, although this issue is not referred to in the current article.

The cosmetic impact of endoscopic surgery including VATS has impressed surgeons as well as patients for more than two decades (1-4). In fact, at our institutions as well, even many high-risk patients, such as elderly patients or hemodialysis patients, have undergone VATS lobectomy (10,11). Over the years VATS technology and techniques have been dramatically refined, to the point that most people are no longer concerned about its potential risks. However, fatal accidents that have occurred using VATS are a sobering reality, and we believe it is time to objectively re-evaluate its advantages.

It is considered that VATS is less invasive and painful owing to the small degree of dermal and muscle damage, and this gentler approach offers several advantages, such as a quicker recovery, enhanced curability and lower medical costs (1-5,10,11). Unfortunately, although many ‘pro-VATS’ reports have been published, well-established evidence (aside from cosmetic aspects) regarding oncological and physiological merits is lacking (1-6,10-12). This is a reasonable observation, considering the size of incision does not compensate for lost lung function after resection (13). There is also a report that VATS lobectomy may result in higher 90-day medical costs than open lobectomy because of the higher rate of postoperative complications (5). VATS may only offer advantages within a short period after surgery, such as less pain and faster recovery.

Of course, we understand that invasiveness cannot be assessed only by degree of postoperative pain, because invasiveness is related to the size of exposure, retraction and tissue injury. However, our results demonstrated that even cVATS was no less painful than open thoracotomy when no adequate analgesia was given, although the cVATS-related pain steadily decreased within a few days. At a minimum, we think that both EA and cVATS should be employed if the purpose is to reduce pain as much as possible. Ironically, according to our results EA sufficiently decreases the postoperative pain of open thoracotomy as well. Under effective EA, cVATS is not superior to open thoracotomy in terms of reduced pain. We believe other methods of analgesia (such as opioid usage) can substitute for EA, but regardless of the method used, it would reduce pain for open thoracotomy patients just as sufficiently as for cVATS patients (14). We of course realize that our results may only shed light on the short period post-surgery, but from this point of view, the lower postoperative pain of VATS may not be clinically significant when coupled with an effective analgesia in the acute postoperative phase (15).

However, we have to admit that the number of patients in our study was not large enough to render a statistically significant finding on this issue. Our anesthesiologists introduced other methods of intercostal nerve block, such as thoracic paravertebral block, midway through data collection and rarely performed EA after that point. However, despite the limitations due to these altered conditions, we believe the results still offer instructive lessons to those involved in thoracic surgery.

In the current study we sought to compare two groups with similar age ranges, as it is generally believed that younger patients complain of more pain. The cVATS group was significantly younger than the open thoracotomy group; therefore, the results might be skewed. But if elderly patients are less sensitive to surgical pain, why should we be concerned with the reduced painfulness of lobectomy for lung cancer?

Nonetheless, VATS remains a fascinating approach in the world of thoracic surgery, especially for young surgeons (6,12,16). It has shown steady technical progress, including uniportal VATS lobectomy (17), owing to the enthusiastic dedication to the procedure throughout Japan (1,3,4,10). Its cosmetic merits are particularly advantageous for young patients as well. The courage to take a chance is valuable, although a sense of moderation based on evidence is necessary to reduce risks (18).

The use of continuous EA outweighs the reduced painfulness of VATS over open thoracotomy in the short postoperative period.

Ethical Statement: The study protocol was examined and approved by the Research Review Board at St. Mary’s Hospital on 15 July 2016 (approval number #16-0606). Before completion of the questionnaires, written consent was obtained from all patients.