Tracheobronchopathia osteochondroplastica (TO) is a rare benign disease, characterized by multiple submucosal osseous and cartilaginous nodules in the tracheabronchus. It was reported by Wilks (1) firstly in 19th century in a 38 years old man with tuberculosis. The etiology is still unknown. The incidence of TO ranges from 0.01% to 4.2% (2,3). Till now, nearly 400 cases have been reported worldwide, however, many TO patients were unable to be diagnosed for the unawareness of clinicians. The manifestations of TO may be either asymptomatic or nonspecific respiratory symptoms. TO could be confirmed by the specific representation through fiberoptic bronchoscopy (FOB) and histopathological examination. A case of TO was reported by our department and recently published literatures were reviewed.

A 52-year old male with non-productive cough for two years was admitted to our respiratory medicine department for further investigation on the underlying causes. The symptom wasn’t related to body position, inhaling cold gases, smoking or diurnal fluctuation. Kinds of antitussive drug were used, with the purpose of alleviating cough in the past two years, but lacked of apparent effects. He denied the history of cigarette smoking. Allergies were unknown. His physical exam was unremarkable. Routine blood tests were always normal and the result of chest X-ray film and computerized tomography (CT) of nasal sinuses could be ignored. The patient was undertaken gastroscopy, which proved to be normal as well. Both standard pulmonary functional test (PFT) and bronchial provocation test were performed and were in a normal range. CT found multiple calcified nodules projected from the anterolateral wall of trachea, and the posterior tracheal membrane was intact (Figure 1). FOB was performed to investigate the underlying causes of chronic dry cough. FOB showed that submucosal nodules protruded into the airway lumen. The mild nodules [defined as nodule diameter protruding into airway lumen less than 10 mm according to published literatures (4-6)] appeared in the distal trachea and main bronchi, freeing the lobar and peripheral bronchial tree (Figure 2). Tissue sample from the nodule was obtained through FOB. Histopathological exam demonstrated submucosal ossification and cartilage in the sample (Figure 3). The patient were treated with inhaled corticosteroids, and after 3 months, the cough symptom was attenuated half according to cough scores (7). 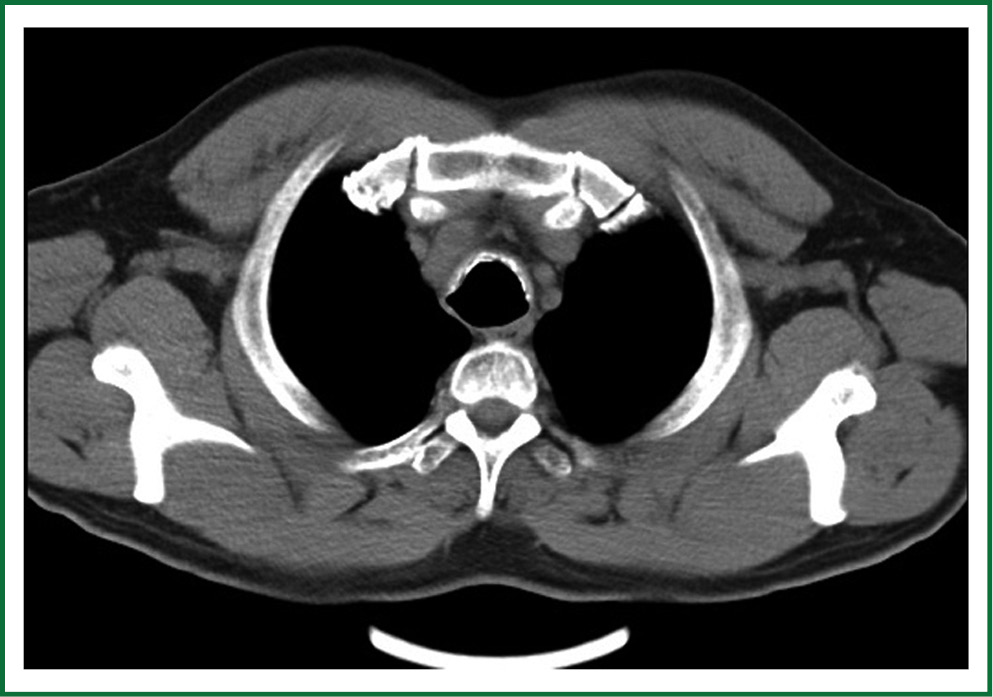 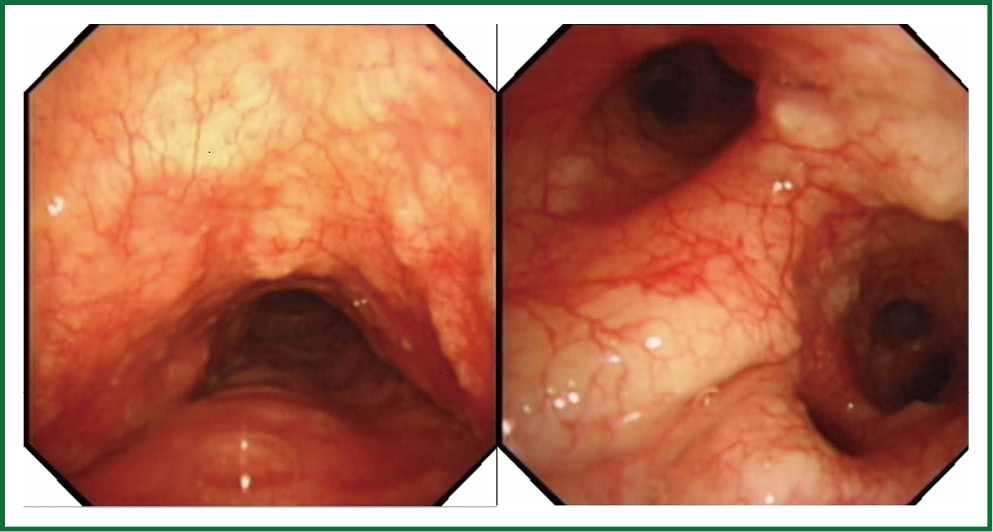 Figure 2. FOB demonstrated that multiple nodules from anterolateral wall of trachea and main bronchi protruded into the lumen. 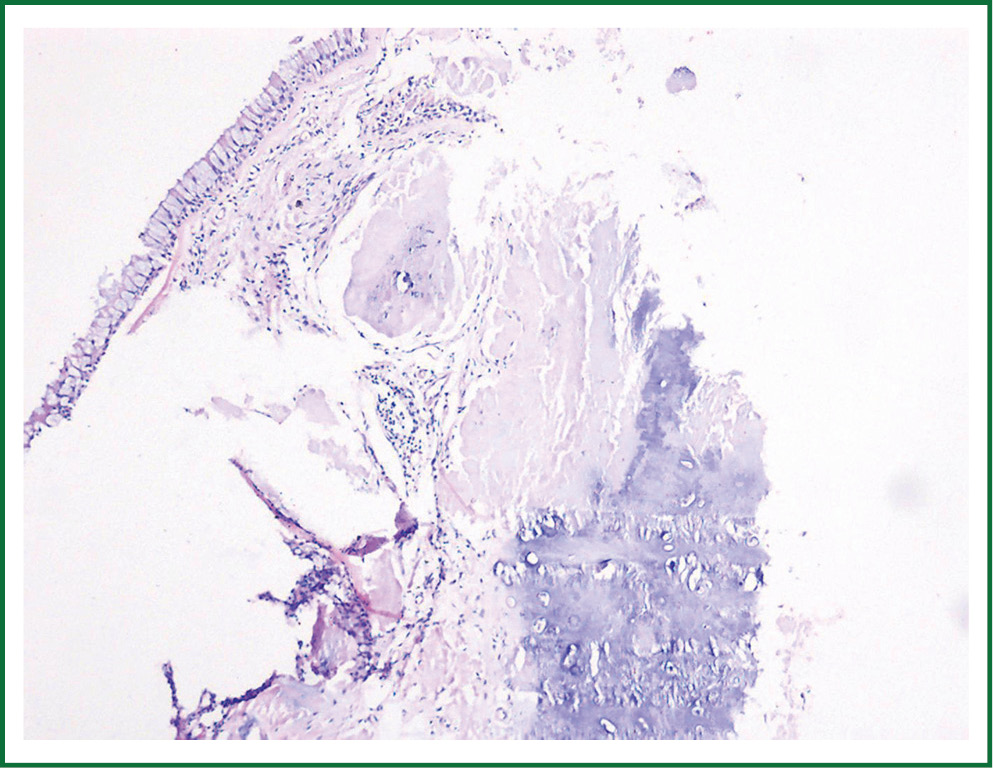 Figure 3. Histopathological exam from the biopsy illustrated of submucosal ossification and cartilage formation.

TO is a rarely benign airway disease, characterized by multiple submucosal ossified and/or cartilaginous nodules projecting into the lumen of airway. The incidence of TO in bronchoscopy is estimated 0.01-4.2% (2,3), Many authors consider that TO is under-diagnosed since it is diagnosed antemortem through bronchoscopy and CT scan, the clinical presentation is nonspecific. The accurate incidence of TO remains unclear. TO is usually diagnosed in person over 50 years old (8), however child younger than 5 years old may also be affected (9).

The etiology and pathophysiology of TO are still needed to be found. An association between atrophic rhinitis and TO was reported (6), but the directly relationship still lacks enough evidence. Malignancy, familial inheritance, chronic inflammatory, metabolic disorders and amyloidosis are also speculated to correlate with TO.

Clinical manifestations of TO patients are variable and nonspecific. Some patients are asymptomatic, the others may suffer from dry cough, productive cough, hemoptysis, dyspnea, dryness of throat, recurrent lower respiratory tract infection, atelectasis, and difficult intubation (6,10,11). Jabbardarjani et al. (11) studied on 10 TO patients and showed that chronic dyspnea was the most common symptom, while Leske et al. (6) found that the most frequent complaint was chronic cough (54%, 22/41). The patient from our department also complained chronic non-productive cough without other respiratory symptoms.

The presentation PFT of TO patients are dependent on the severity of TO. PFT could be at normal range in mild TO patients. PFT of the patient with mild nodules from our department was normal. People speculate mild nodules without narrowing the airway lumen does not result in significant airway obstruction. However, obstructive or restrictive ventilatory defect, reduced peak flow and abnormal flow-volume loops were found in some TO patients (6).

The X-ray appearance of TO has no any characteristics. Chest CT scan may demonstrate that the special finding of multiple submucosal calcified nodules involving the anterior and lateral wall of tracheobronchus, sparing of the posterior wall (12).

The hallmark of FOB finding is the sessile submucosal nodules protruding into the lumen of trachea and main bronchi, keeping the posterior wall intact (13). The FOB finding is described as spiculate, beaded, rock garden, or cobble-stoned appearance. The rigidity of airway wall and hardness of the nodules make it difficult to advance the FOB in some severe patients.

The characteristic histopathological findings in bronchoscopic biopsies among TO patient were the cartilage and ossification in the submucosa, calcification, mucosal squamous metaplasia (5,6,11). In a study (6) of 41 TO cases, bone in the bronchial submucosa (56%) and squamous metaplasia of the trachea epithelium (48%) were the frequent findings. Biopsy is no essential since the typical appearance of FOB is enough to make a diagnosis. However, histopathological picture may help to rule out other diseases such as amyloidosis, mucoepidermoid carcinoma, papillomatosis, sarcoidosis.

The treatment of TO is symptomatically dependent and nonspecific. Several therapeutic modalities including laser ablation, surgical resection, mechanical debulking, and medication for relieving symptom have been reported (6,11,14-16). The cough symptom of the patient from our department was attenuated after three months therapy of inhaled corticosteroids. Previously, inhaled corticosteroids has been used for deal with TO. Leske et al. (6) treated respiratory condition with inhaled corticosteroids in 8 of the 41 TO cases. All the medical therapies mentioned above are palliative, there is no definitive method to eradicate TO.

For TO is a benign disorder, the clinical outcome is optimistical among TO patients without severe complication (6,11).

In conclusion, TO is a benign trachea and bronchi disease, characterizing by submucosal ossified and cartilaginous nodules. FOB and histopathological exam can confirm the diagnosis of TO. TO may cause several clinical symptoms. The medical treatment modalities are nonspecific and the clinical outcome is relatively good.