At present, the incidence of breast cancer in the world is obviously increasing, which seriously affects women’s life and health. According to epidemiologic data, breast cancer exist familial clustering individual and race differences (1). These suggest that genetic factors play an important role in the initiation, promotion, and progression of mammary carcinogenesis. As rapid advances have been made in molecular biology and bioinformatic analyses, a lot of mutations were detected in BRCA1 genes. One study has shown that gene mutations of BRCA could be inherited as an autosomal dominant (2). More than 80% of hereditary breast cancer cases carried gene mutations of BRCA by age 80, they had an early age at onset (3). Role of genetic testing for BRCA genes is to find hotspot pathogenesis and screen for high-risk groups. It is a manifestation of assessing the risk of familial breast cancer and its early diagnosis. Although a few studies have been carried out for investigating BRCA mutations in familial breast cancer in Chinese women (4,5), the spectrums of BRCA gene mutation are different due to other environmental and geographical factors (6,7). In this cohort study the aim was to analyze BRCA1 gene mutations of familial breast cancer patients with Han nationality in Henan, China.

Our study was approved by the Ethics Committee of the Institute for Henan Population and Family Planning (No. 2014YC005). Written informed consent was obtained for all patients.

This study enrolled 59 breast cancer patients and 122 healthy donors whom were unrelated to each other. All breast cancer samples were diagnosed according to histopathologic examination and came from the Center of Human Genetic Resources, Institute for Henan Population and Family Planning.

This assay included: all PCR primers were designed using the software PRIMER3-OUTPUT according to BRCA1 and BRCA2 gene exon sequences reported in Gene Bank. There were 24 primers on BRCA1 gene. Multiplex PCR was performed with a thermal cycler and PCR products were purified. Purified PCR were denaturalized at 94 °C for 30 seconds and cooled down to room temperature within 30–40 minutes. This could contribute to forming hetero-duplex between normal BRCA gene and mutated gene. Denaturation temperature of target DNA fragments was predicted by WAVE Maker/Investigator software. Equal sample loading was 5 μL. According to changes of peak at 254 nm ultraviolet wavelengths, BRCA gene mutations were detected. Samples with BRCA gene mutations were PCR amplified again and confirmed by sequencing at Sangon Biotechnology Limited Company.

The difference in the rate of BRCA gene mutation between patient and healthy donor was analyzed χ2 test. P values <0.05 was considered as statistically significant. 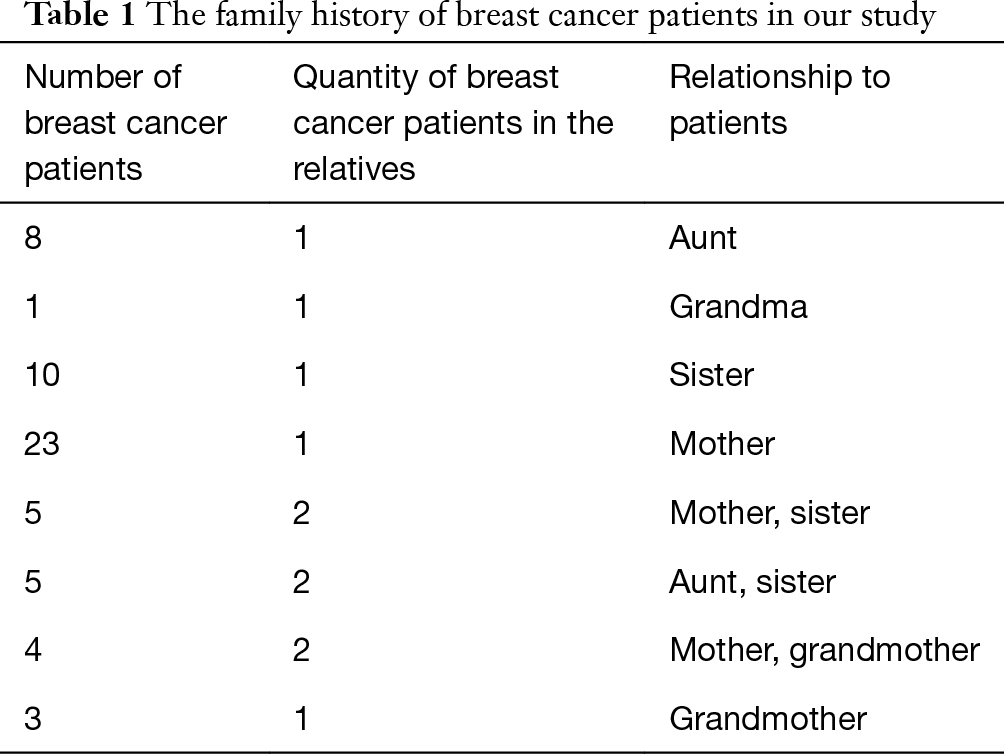 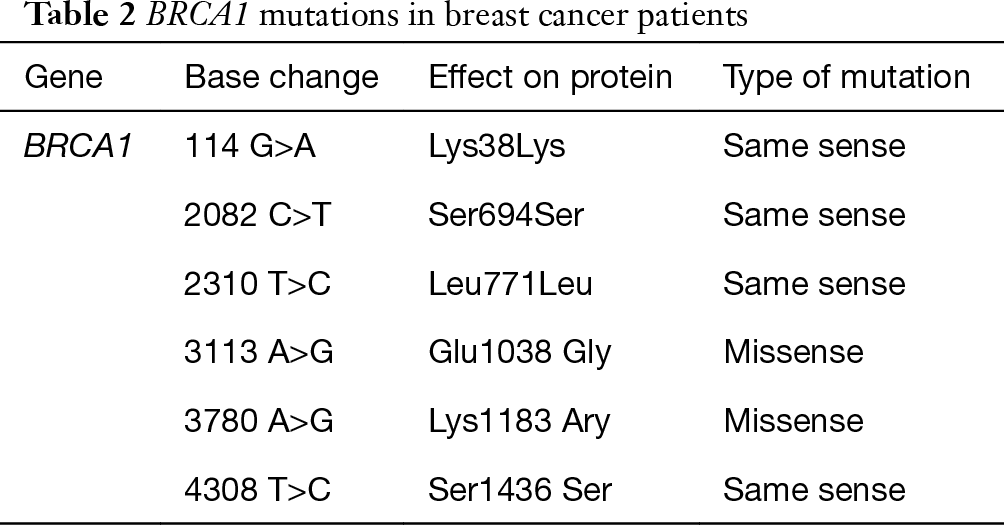 BRCA1 mutations were detected in 7 of 122 healthy donors, and the mutation rate is 5.74%. Comparing to two rates of BRCA gene mutations between patients and healthy donors there were statistically significant difference (P=0.0001) (Table 3). 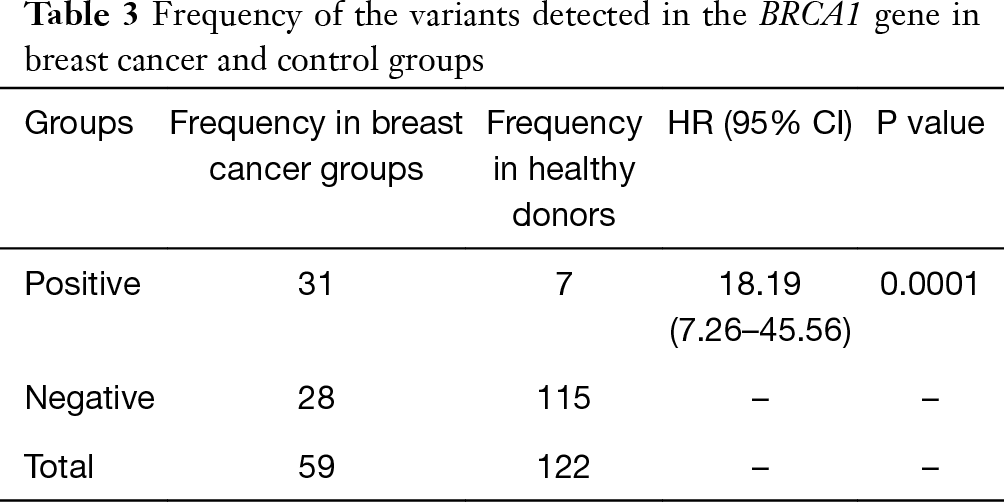 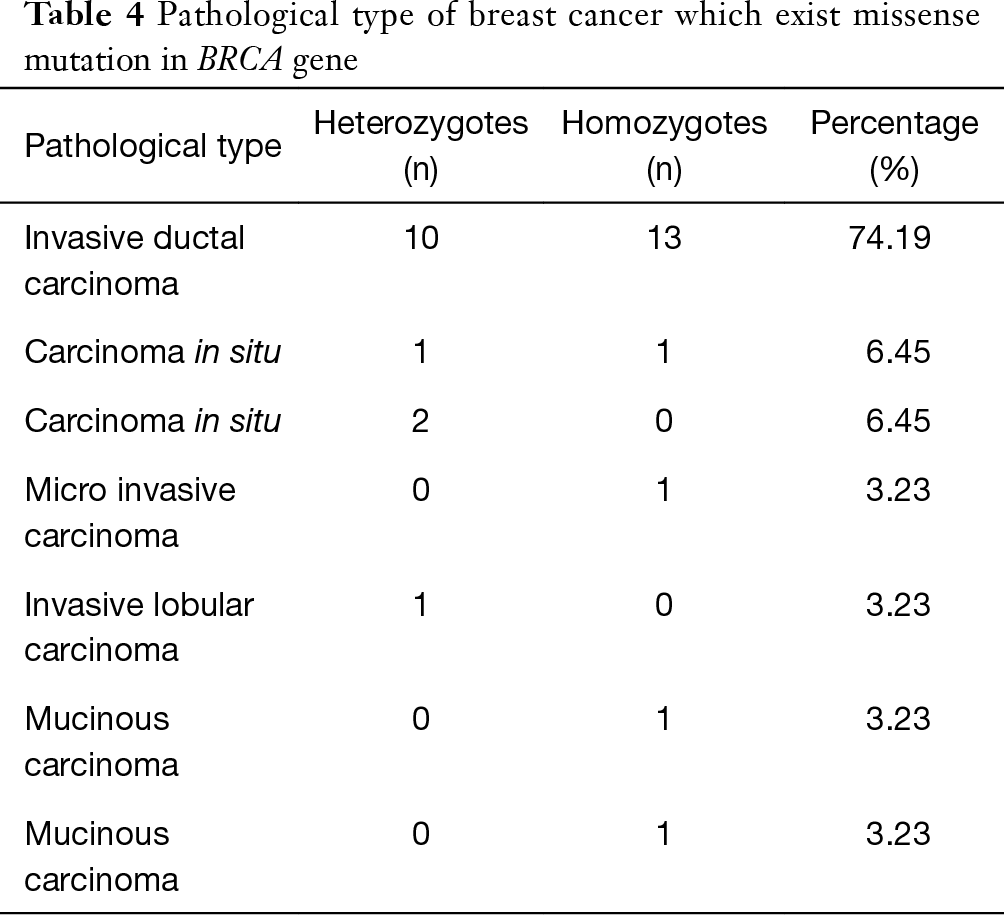 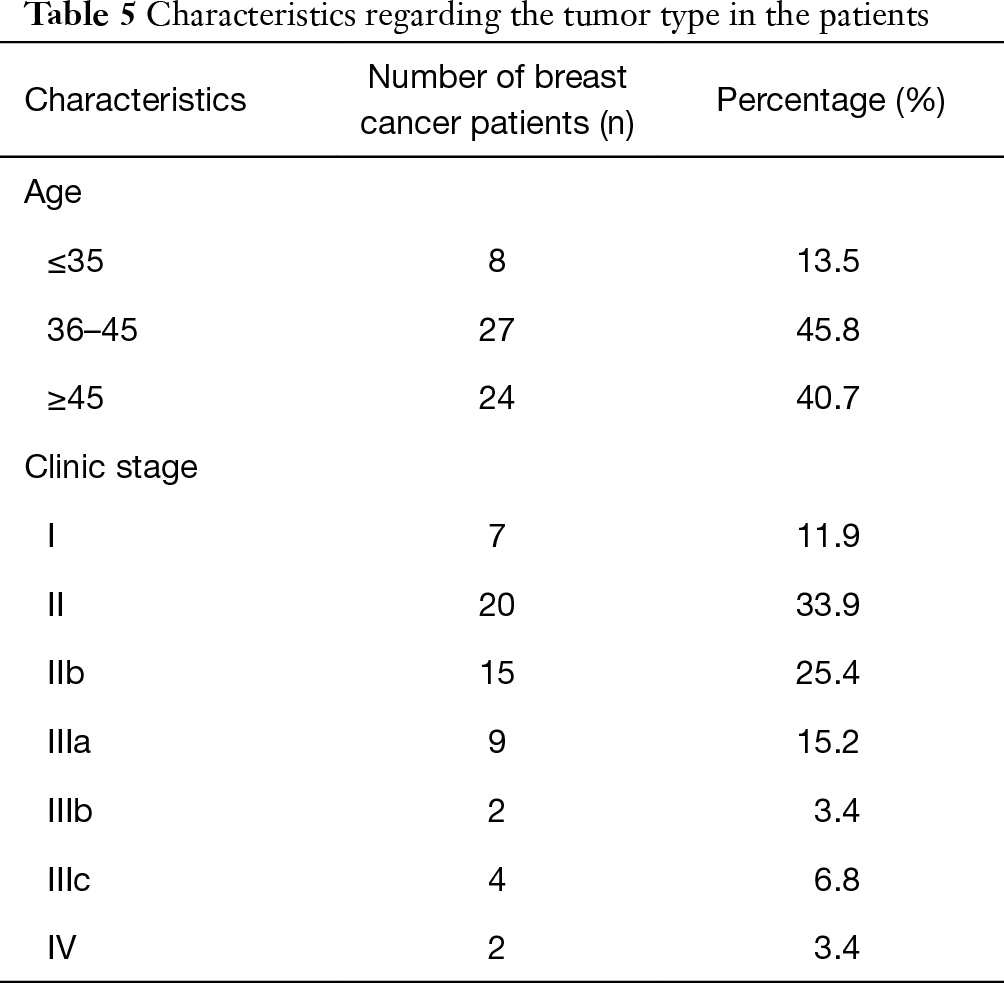 Our result had shown the rate of BRCA gene mutation among healthy donors was 5.74%, which was consistent with published result (4). There was statistical significance between breast cancer patients and healthy donors. So the result in this study suggested that women with familial breast cancer are good candidates for BRCA testing and women who carry a BRCA mutation should gain necessary inspections in order to find breast cancer.

In conclusion, in a cohort of 59 familiar breast cancer patients and 122 healthy donors in Henan China, we found that the mutation rate of BRCA1 was as high as 52.54% in patients, and do not identify any mutation in BRCA2. Mutation rates were also varied in different subtypes of breast cancer. The subtype with the highest mutation rate was invasive ductal carcinoma, which was 74.19%. Our report here indicates that BRCA1 is the major mutated gene in this cohort of patients. Therefore, the preventing and diagnosis of breast cancer with inherited patients should be mainly focus on detecting BRCA1 germline mutations at least in Henan area of China.

Ethical Statement: Our study was approved by the Ethics Committee of the Institute for Henan Population and Family Planning (No. 2014YC005). Written informed consent was obtained for all patients.